the bean had another milestone not too long ago - her first trip to the movie theater!

while this doesn't really sound like a big deal, it actually kinda really is.  on average, you spend about two hours at the movie theater.  stand in line for tickets, buy snacks at the concession stand, find the perfect seat, sit through a zillion previews, and then the movie itself can be anywhere from an hour and a half and up.  right?  so it's pretty tough to expect a two-year-old to sit quietly through all that.  this is why we'd not tried it yet.  i refuse to be *that* parent, who insists on bringing an obviously too-young child to a theater and proceeds to disrupt the entire thing (despite the fact that it was a kiddie movie anyway).

but when toy story 3 came out, she really wanted to see it.  and i won't lie - so did i (as did the teen).  i actually put it off for a while, trying to wait until most of the crowds had gotten the chance to see it first.  and then finally, we had the perfect opportunity - the teen was home, the bean had had a nice, long nap, and there was a 3D showing at just the right time.

and then as we were heading to the theater from the parking lot, my freaking flip-flop broke on me.  this is the third pair of flip-flops for me now, and they've all busted in the same spot.  i've finally come to the conclusion that i must drag my feet or something. 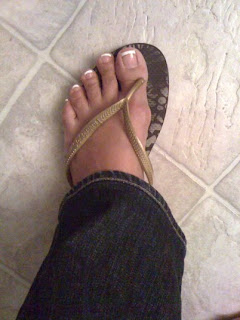 we stopped at the concession stand to pick up some snacks: 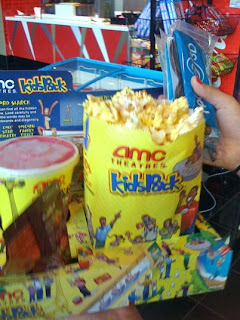 made our way to the theater: 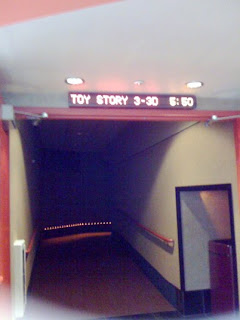 and as luck would have it, there were only a handful of other people in there.  yay!  we got comfy in our seats - the bean in my lap, with her little toddler-sized 3D glasses on: 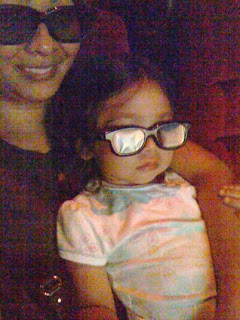 and then the show started! 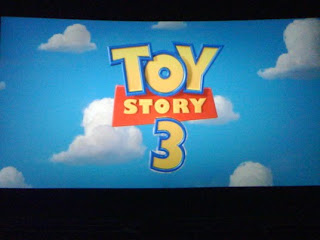 i was so proud of her - she sat quietly in my lap the whole time, watching intently and stuffing popcorn into her mouth as she stared at the giant screen in awe.  she wasn't bothered at all by the scary-ish parts, and was so excited when she saw her buddies woody and buzz.  it was only during the last few minutes of the movie that she finally got a little restless, but by then it was totally fine.