wow, the response on the first day of the veronabean blog sale was pretty stinking fabulous!  pretty exciting, considering i'm trying to raise cash to spend on the bean's next birthday bash...just over a month away.  with the new house, my goal is to spend as little as possible, but if i can earn some extra dinero in unexpected ways (yay!), then i can splurge a little on some stuff.  there's still some stuff to be had - go go go!  oh, and on that note, i grossly overestimated the size of the small flat rate-box - it's really only big enough for a DVD or something similar.  most items are being shipped in the medium sized flat-rate box.  sorry for the misunderstanding!

btw, i made an executive decision to change the theme from toy story to monsters, inc.  the bean loves that movie so much, and wouldn't it be super cute to dress her up as boo for the party?  not too tough - a simple purple dress with hot pink leggings and pigtails.  not to mention, those potatohead cake pops were such a pain in the ass.  i think i may have tried to bite off more than i could chew with those.  but you know what would be SUPER easy?  making mike wazowski cake pops!  i haven't tried it yet, but come on - the guy's a big green ball with an eye.

i also want to make a regular cake for the party, too.  i've seen all sorts of great-looking cakes done with rolled fondant, and although i hadn't touched the stuff before, how hard could it be?  i mean, it's like play-doh, only better 'cuz you can eat it, right?

so i hit up the awesome cake & candy supply which is now literally just around the corner from home (dangerous) and bought this tub: 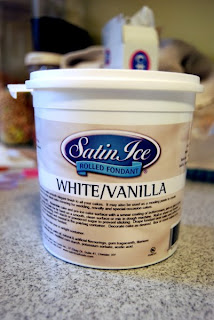 i'd been watching the ladies at work when they tackled the task of creating the colorful fondant pieces that top the cupcakes we sell, and decided that i could totally do that.  heh.  so first, i sat the bean in her high chair and set all of her play-doh tools up so she could play along: 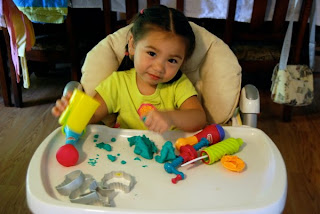 then i totally cheated by taking a shortcut and baking a cake from a mix: 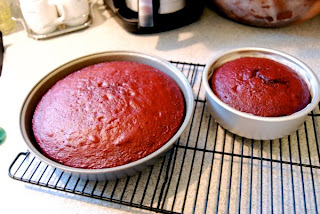 next, i took balls of that fondant and started kneading gel coloring into it. 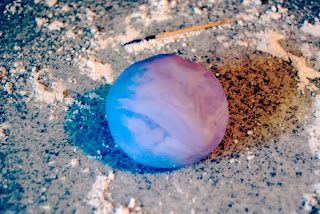 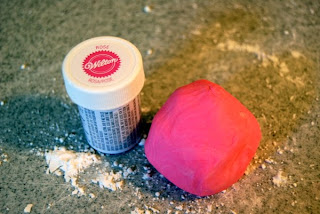 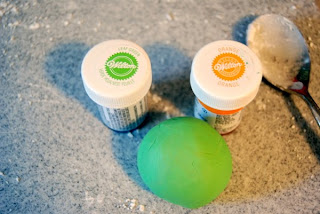 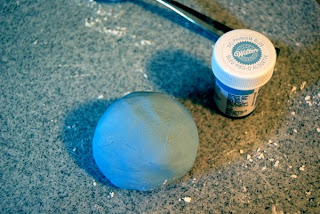 getting that turquoise-y color for sully isn't gonna be easy.  i think i need more yellow, or something.  i'm really bad at mixing colors.

and when the cake was completely cool, i slathered the layers in store-bought frosting and rolled out the fondant.  i was a little apprehensive, as tasks that look too easy to be true usually are.  but it wasn't too bad at all.  next time, though, i'll make sure to smooth out the top of the icing really nicely so there aren't too many lumps and bumps (that's the little measuring ring off of my fondant roller, because the camera couldn't find something to focus on): 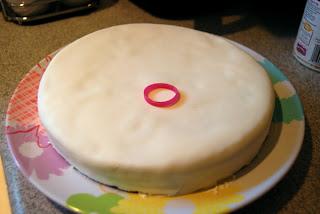 not too bad, right?  at least, not for my first time.  i popped my fondant cherry, y'all.  ew.

i repeated the process for the smaller layer and carefully picked it up and set it on top: 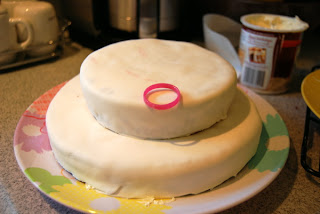 definitely not perfect, but it'll be easier next time.  at least, i hope.  and my tiers aren't squatty enough.  i think i'm going to need to buy taller pans, or bake double layers for each tier.  but this was just a test run, so it's all good.

the next step was rolling out pieces of the colored fondant and cutting them into circles. 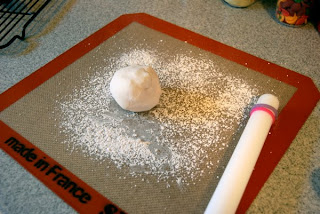 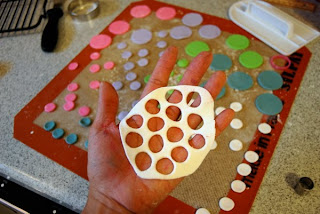 i'd read about using "fondant adhesive."  at work, i learned that no such thing is needed.  a little water does the trick just fine.  now, keep in mind that cake decorating is definitely NOT my forté.  good lord.  i'm going to have to stick to rows of polka dots in alternating colors and leave it at that.  but okay, here's the finished product: 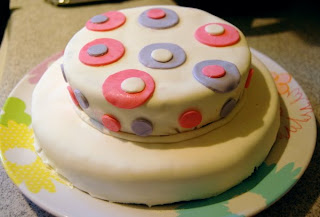 i tried to disguise the gap between the layers with a little roll of fondant.  did it work?  the bottom layer could probably use one, too, but i was kind of over working with the stuff by then.  ha!
at September 01, 2010

Email ThisBlogThis!Share to TwitterShare to FacebookShare to Pinterest
Labels: adventures in cooking, fond of fondant