it wouldn't be summer at the wans' without at least one jonas brothers concert.  right?

the l.a. show was originally scheduled for the middle of the freaking week, at our least favorite venue possible - verizon wireless ampitheater in irvine.  wah waaah.  even the teen was super hesitant to scoop up tickets with those two negatives in the mix.  and we were so sure that they'd add additional shows, preferably at a venue actually IN l.a.

but they didn't.  and we were sad.  the only bright spot came when the announcement came that they'd changed the date to a sunday instead - the day after my birthday.  woo-hoo.

and then my lovah ryan seacrest had a special 24-hour sale, during which you could scoop up tickets to the show for a mere $20 - including all the stupid taxes and fees that ticketbastard usually tacks on.  could it be - are the JoBros losing their midas touch?  there was a time when i had to buy tickets during fan club presales to ensure that we would get seats at all, because they typically sold out within minutes of going on sale to the public.  hmmm.

of course, by the time i got home from work during that sale, i was totally assed out and there were no more tickets to be had.  sad trombone.  we resigned ourselves to checking ebay as the date got closer, and forgot about it.

until seacrest decided to release more $20 seats - and this time, i was successful in securing three.  the teen wanted to bring her buddy rock-ell, and we were all set.  yay! 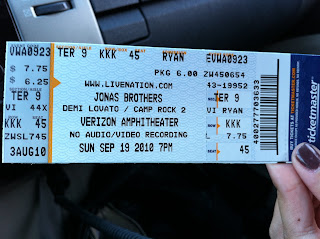 we almost managed to snag tickets to the band's baseball game earlier in the day, but was totally assed out yet again.  they formed a team called the "road dogs," and i don't know who they play exactly, but they've been playing games at every stop on the tour.  the game was in long beach, and they were only releasing tickets at the box office at the baseball field on wednesday at 10am.  like i was going to be able to swing that.  sheesh.  anyway, i'd found a seller on craigslist selling them for $10 apiece, but by the time i got ahold of her, she'd sold them all.  poo.

so instead, we found ourselves heading down to irvine around 5:30 that afternoon.  as we sat in a long line at the freeway exit for the venue, we could hear girls in cars all around us screaming and cheering.  psh, we're pros - we were excited for the show, but we were so not on that level.  heh. 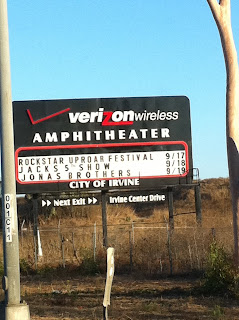 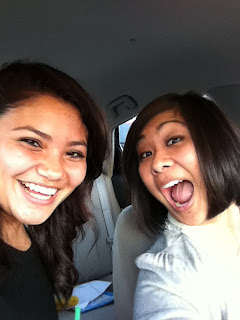 although there were signs charging $10 for general parking and $20 for the VIP lot, we were waved along by the event staff without being stopped for the cash.  hey, i wasn't complaining.  i did what any of you would do - pulled happily into the VIP lot and parked the pri-YES.

but it wasn't all roses and happiness.  the line to get into the venue wrapped around the entire damn lot, and it was ridiculous.  we walked a freaking country mile and a half to the end of it, and then all the way back around.  oh, well.  we scooped up a couple of freebie CDs for some fledgling artist along the way. 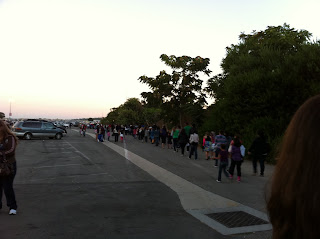 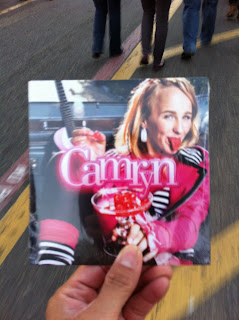 we were stuck behind these grown ass folks, who were chainsmoking like a damn chimney the whole way and clutching orchestra-level tickets.  there wasn't a single youngster or fan-like being in the group, and the teen was outraged - in her eyes, it was a total waste of great seats.  heh.  and from the bits of conversation we eavesdropped on, we deduced that they were in the music industry in some way.  whatever. 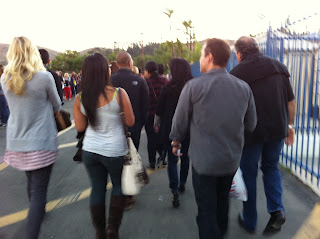 when we finally made it in, we paused to take a picture.  the teen won't be pleased to see how shitty it turned out.  oops. 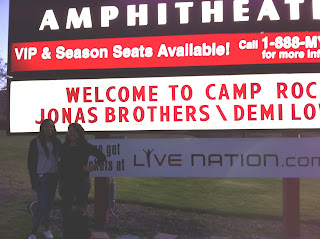 this tent caught our eye, and as we made our way to the entrance we were asked if we'd seen the JoBros before.  heh. and when we answered, the dude on the microphone was incredulous:  "this is your 15th jonas brothers show?!?"  i guess it does sound pretty nutty when you say it out loud like that.  sheesh. 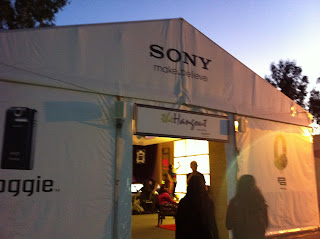 inside, there was a big ol' board that girls were scrawling messages of undying jonas love and devotion on. 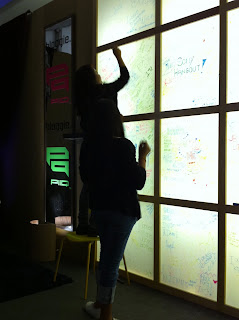 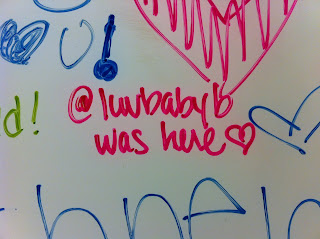 our seats were SHITTY, y'all.  but we already knew this based on past experience and from looking at the seating chart.  besides, what did we expect for $20? 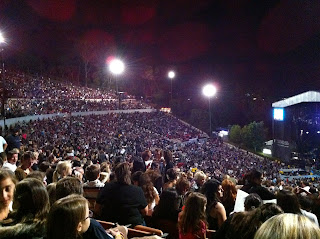 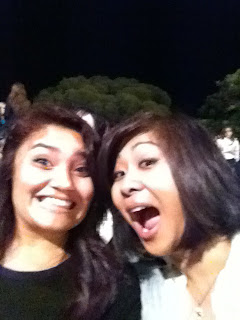 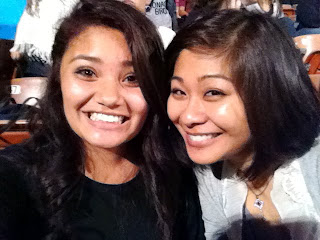 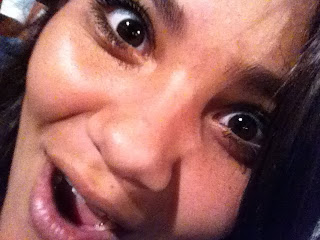 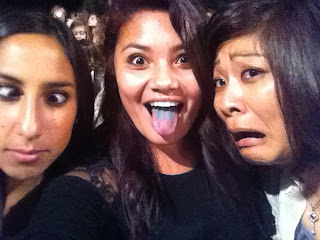 this guy kept us entertained the whole night.  he had a glow stick, which he twirled constantly, and danced and sang along to all the songs...alone.  yup. 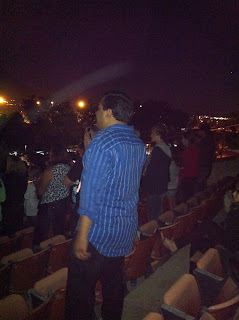 sadly, we were yet again stuck behind a bunch of freaking party poopers.  i just don't understand why parents bring small children to concerts like this.  i mean, are they new?  they sat angrily with their hands clapped over their precious kids' ears, protecting them from the screaming and cheering of the crowd.  of course, this only spurred the teen on and she screeched and yelled heartily.  i might have done a little myself.

needless to say, my pictures are super shitty.  these blurry shots are the only proof i have that we were there, although i'm sure you didn't need any photographic evidence of our presence. 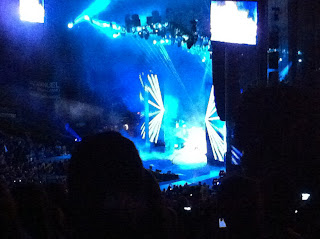 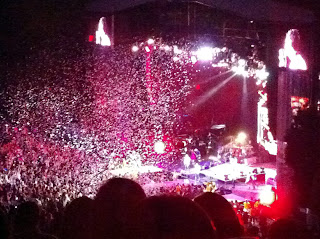 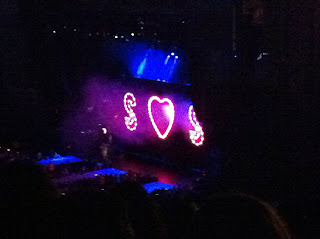 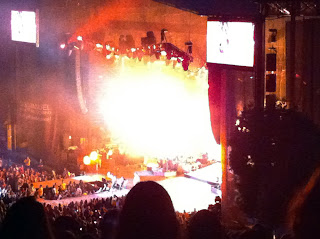 it was a fun show overall.  i thought it seemed a little lower-budget than previous tours - not as many of the bells and whistles as before, but it was fun to sing along to the familiar tunes and watch the teen rock out.  and more than once, when nick jonas appeared onstage (and onscreen), she shouted "i'm going to have your babies!  and they will be gorgeous!"  oy vey.

when it was over, we sat in our seats and watched the stream of folks cram their way towards the exits.  security was in full force, too, making sure that nobody rushed the stage. 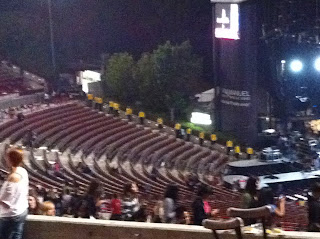 it cleared out fairly quickly, and we made our way down towards the concession stands so that the teen could scoop up a tour tee. 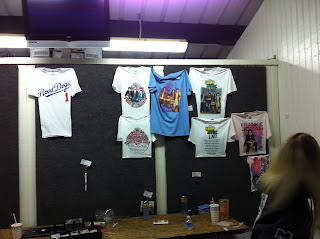 i decided to skip it this time around and settled for a handful of freebie dental paraphernalia as my souvenir. 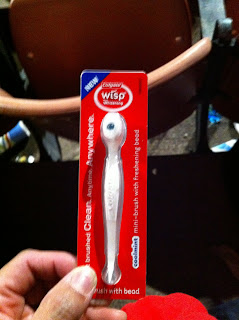 buh-bye, venue that we hate. 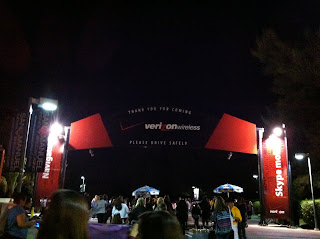 even after all of our waiting around, the parking lot was still a clusterfuck.  ugh. 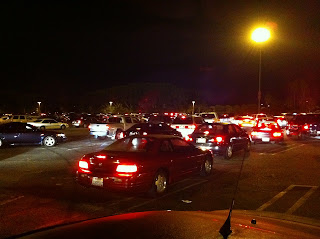 spurred on by the teen and my own fatigue, i decided to do what the others were doing - i went into asshole mode and cut and squeezed and wiggled my way through the lines and got us out of that parking lot within about ten minutes of getting in the car.  we were on the freeway in no time.  being a douchebag pays off sometimes.

both girls fell asleep on the way home, and even the starbucks i'd chugged on the way to irvine wasn't helping me.  it'd been a long day, but a super fun one, and it was nice to share the end of birthday princess weekend with the teen doing something we enjoy together.  we pulled in around midnight, and i wasn't looking forward to getting up for work the next day.  i just knew i was gonna be draggin'.