it is freaking impossible to coordinate schedules with the SFAMily nowadays.  damn.

we even tried to get it together nice and early - i think the first e-mail went out in september or something.  and still, we ended up having our very first holiday hoorah without the whole group all together.  though we had a great time, it wasn't the same.  trish was still stuck out on the wrong coast, the monkey was traveling, california girl ended up with sick kiddies and weatherjen had family issues to deal with.

because of the new house of wan, i was more than happy to host the shindig this year.  i haven't been able to host in several years, but i was stoked to be able to offer up our casa this time.  so i was a happy, busy bee getting ready that sunday before christmas: 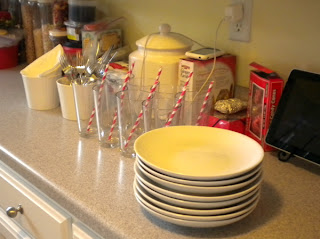 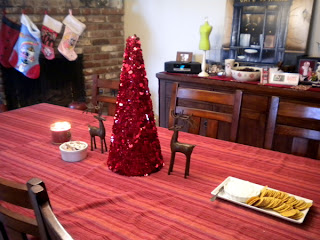 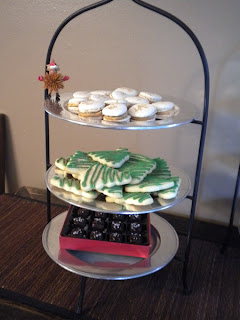 because i was still obsessed with making macarons, there were some salted caramel ones up for grabs.  and i'd just done an order for sugar cookie trees, so i made some extra ones to put out.  and i'd picked up a box of those scrumptious salted caramels at trader joe's to create my dessert trifecta.

despite the pouring rain, the rest of the gang still made the trek out to my neck o'the woods.  i was excited to see everyone, and gave those who hadn't yet been to the house a quick tour.  by the time ashley and winnie arrived, we had quite a lovely spread on the table for us to enjoy. 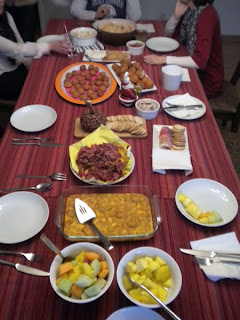 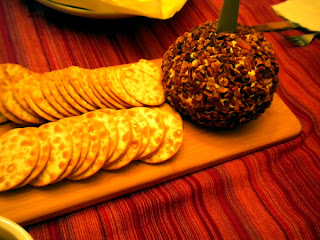 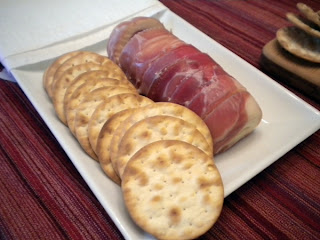 there were golden balls of yes - mac & cheese bites from r and porto's bakery's coveted potato balls brought by lilcee. 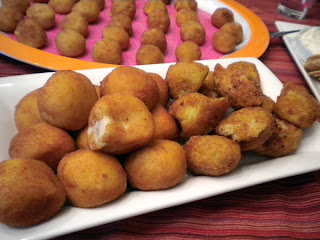 and this glorious heart attack on a platter from ashley: chili cheese fries topped with pastrami, straight from the hat. 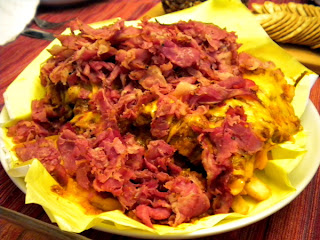 i'd say it was a winner, judging by the looks on these faces.  ha! 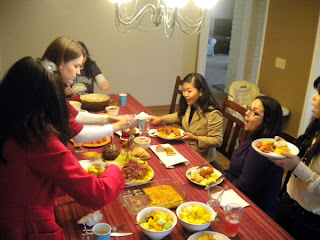 i, of course, didn't hold back.  heh.  and yes, i rolled out the tater tot breakfast casserole again. 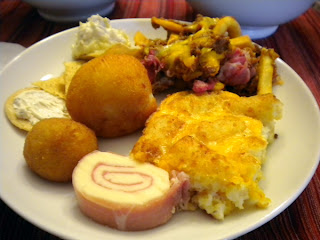 it was the first time this year's christmas tree actually had presents underneath it. 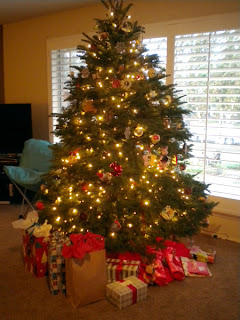 we had a ball, as we always do, despite our missing comrades.  it was so much fun to catch up on how everyone's doing, and i think everyone will agree that the very best part of the day was when r whipped out sonogram pictures and happily announced that she's pregnant.

oh, i'm tearing up again just typing that.  after the year she'd had, it was the most wonderful news ever, and there were lots of soggy, ecstatic hugs.  so awesome!

the hub and the girls got home as we were starting to wrap it up.  the poor teen - i'm always roping her into taking a group photo of us.  but it's not a GTG without one.  and somehow i ended up right in the middle of this one. 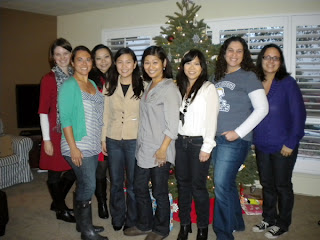 yay for holiday hoorah!  although i'm thinking that we should just go ahead and plan the next one now, to make sure everyone can come.  heh.
at January 04, 2011