i went to glee live!

this was the first glee event i'd ever been to without the teen.  i was sad, but she was okay with it.  the only stops on this year's tour were timed during her weekend with her dad, and she knew he wouldn't let her go.  and she was really sweet about it - "go, mom.  you'll have fun!"

the next best thing to gleeking out with the teen is going with my friends lilcee & mr. lilcee, who are huge fans like we are.  we picked up another of their buddies along the way, and made sure we had time to grab something to eat before the show started.  this year's concert was at the ginormous staples center, so we had lots of fun choices for food.

our first choice, trader vic's, was pretty crowded.  in fact, the dude at the front told us that the wait was currently an hour and a half.  i was bummed, and told him so.  we turned away dejectedly and mulled over our options - and as we got about ten paces away, he came scurrying up to let us know that a table had just opened up at the bar.  i gave him the biggest grin ever, and he said "well, i sure didn't want to disappoint you!"  heh. 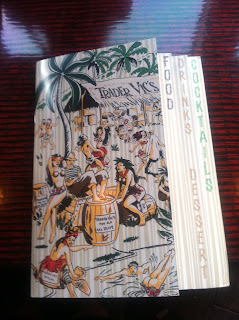 i hadn't even had a drink yet, and i was already snorting at the menu.  "you want to put beef in my what??" i giggled. 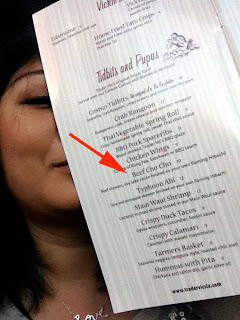 the cocktail menu was pretty extensive.  but i wanted something that was familiar - and so i ordered a lava flow.  it always brings me back to hawaii, i love the flavors of the piña colada and strawberry puree together, and it's just a happy drink.  it wasn't on the menu, but our server said it wasn't a problem.  yay! 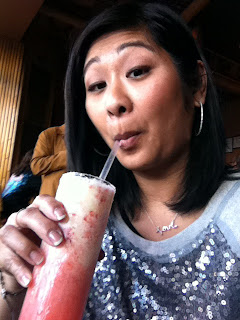 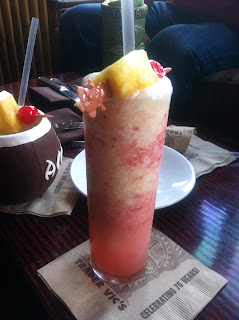 the others' drinks were served in cool vessels.  mr. lilcee's had the rum in the lime half, and it was on fire!  so awesome. 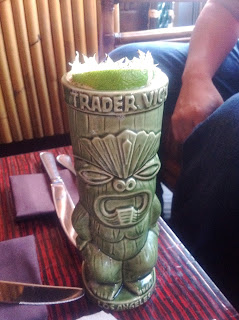 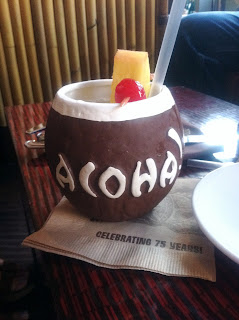 we ordered a plethora of appetizers, which was fun.  look, the beef cho cho - it was partially cooked, and you finished it off over the pretty pretty pink sterno: 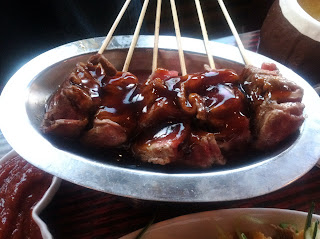 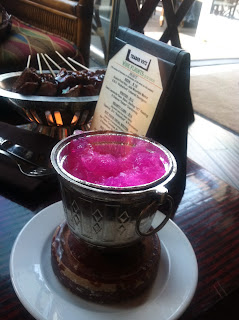 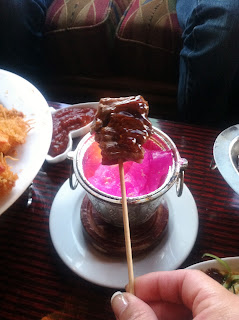 pu pu platter!  and the dipping sauces were served in this butterfly plate - which seemed a little odd considering the theme of the joint, but whatever. 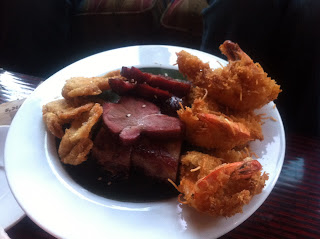 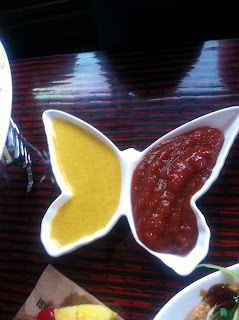 the duck tacos were delish. 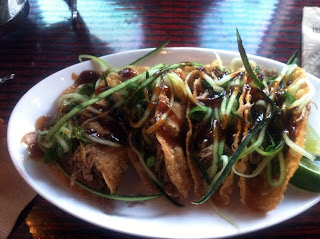 the sweet potato fries were served in this cute little mini fry basket.  i was really tempted to scoop it up and hide it in my bag.  yes, i'm totally serious. 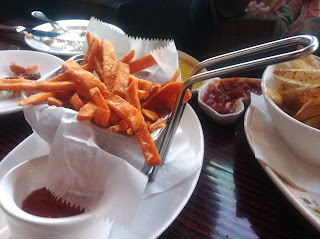 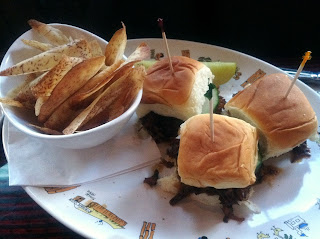 by now, i'd blazed through my lava flow and had already ordered another.  and because i'd walked in hungry, it went straight to my head and i was having a goooooooood time.  heh.  i couldn't stop looking at this. 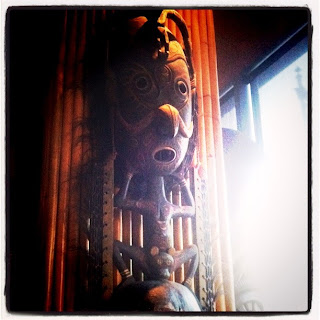 as i sucked up the last bit of my second drink, our dessert sampler arrived. 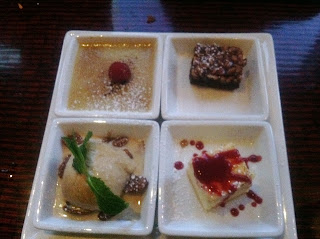 if you follow my tweets and happened to be checking your feed that evening, i may have provided some mild entertainment.  i read over them the next morning and cracked myself up, and the teen totally made fun of me for it too.  hilarious.  and so this explains the majorly fuzzy and unfocused photos i'm about to share with you (never mind that my photos often suck anyway). 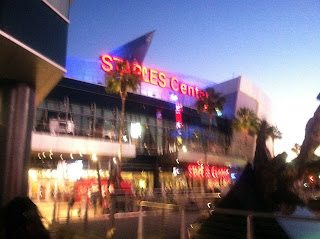 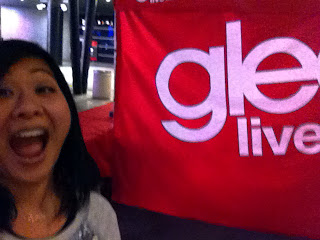 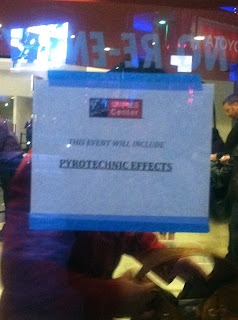 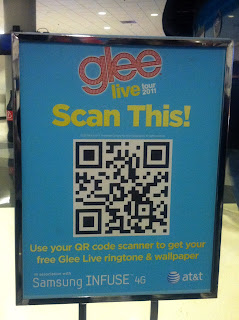 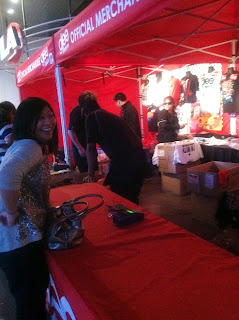 unlike last year at the smaller, more intimate gibson ampitheater, our pricey tickets didn't get us a fantastic view of the stage.  well, we were in the center, which was good - but stupid far away. 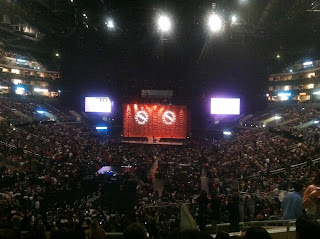 no matter.  we were still really excited for the show! 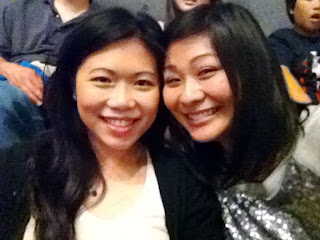 it opened with the same song as last time - "don't stop believin'." 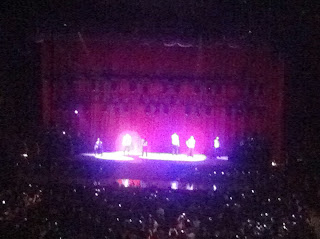 warblers!  my second husband, darren criss!  we were stoked to see them pop up on this smaller stage, about halfway between us and the main stage. 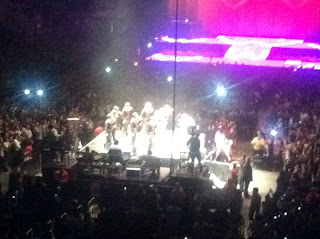 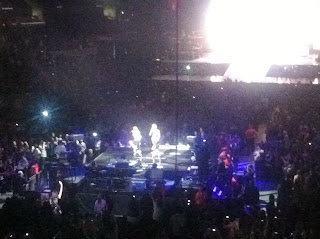 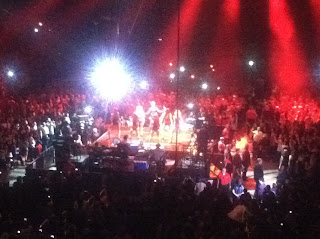 the whole cast was there, including ashley fink and chord overstreet.  it was so much fun, and a few of the guys came out for "glee unplugged" - and gifted us with their [much better] rendition of "friday."  and dang it, now that annoying song is back in my head.  partyin', partyin', YEAH!  the rest of the gang came out for a final encore, which was capped off with a blast from the cheerios' confetti cannons. 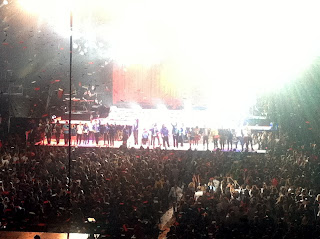 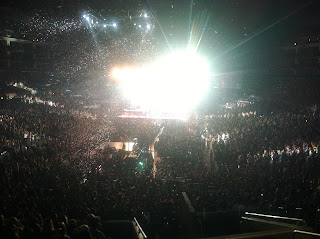 ah, so much fun.  i still love glee a lot, despite other people's sour outlook on their sophomore season.  whatever.  remember, i'm really easily entertained.
at June 06, 2011