so i've been horribly addicted to pinterest now for a couple of weeks.  dang it.  if you haven't been sucked in yet, it's basically a virtual pinboard that you can use to "pin" things you find on the internet so that you can go back to it whenever you want to.  it's the greatest time suck that ever was, and when i'm bored or have nothing better to do, i'm perusing the posts for all sorts of stuff.  folks pin fun things ranging from food items to home projects to inspirational words to fabulously nostalgic items that i'd forgotten all about.

anyway, i've pinned a bunch of wonderfully fattening things to my "food" board, including something i'd seen ages and ages ago on picky palate's blog.  what do you get when you mix up a batch of this: 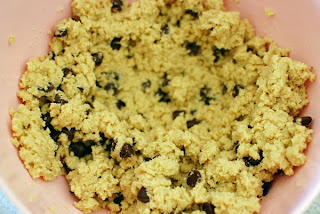 throw in a package of these: 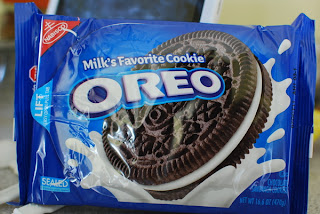 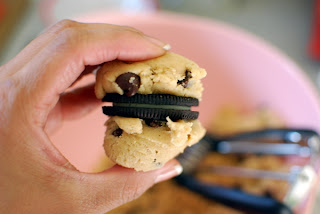 oreo stuffed chocolate chip cookies.  it's a freaking cookie INSIDE of another cookie, people.  and once i was reminded of this fantastic idea, i had to try it for myself.

since the recipe yields 2 dozen cookies, i did what i often do and halved it.  and when i flattened those gobs of dough around the oreo and sealed the edges, i ended up with these things that were damn near the size of tennis balls: 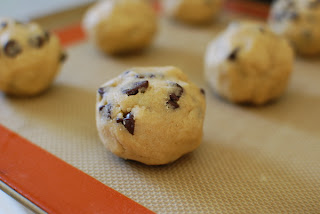 by the way, i was pretty impressed that cutting the recipe in half yielded exactly a dozen consistently ginormous cookies.  recipes don't usually produce the number they promise.  see how big they were? 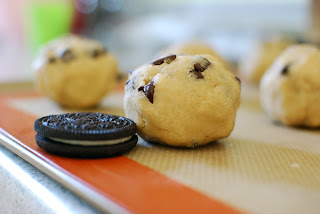 after spending a little quality time in the oven, they spread a little but were still huge and made the house smell amazing. 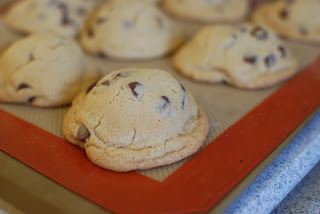 i didn't tell the hub what the secret was about these, and the joke was on me when he announced that he'd decided to quit sugar in an effort to drop some poundage for the summer.  crap.  but seriously, how do you resist this?? 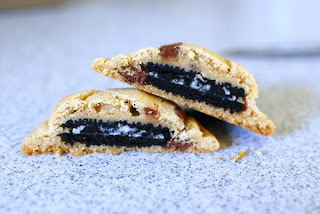 mmmmm.  they really are so ridiculously good.  the oreo softened up a little in that dough, and the flavors just go so well together.  anyway, since i'm apparently the only one who's indulging in these at the moment (the teen is at her dad's this week, and the bean - well, what she doesn't know can't hurt her), i put most of them in the freezer.