so you know i've been obsessed with pinterest for a few weeks now.  seriously, it's so addicting and i find myself browsing through other people's virtual pinboards at random moments like when i'm bored in the car, or sitting in the bean's room waiting for her to fall asleep.  thank goodness for the iPhone app, even though it sucks and crashes constantly.  it works just well enough to keep me occupied when i really need it.

and so last week when i saw a tweet about a pinterest meetup, i was interested enough to re-tweet it and see if anyone else was willing to check it out with me.  happily, my friend lilcee responded pretty quickly, and so it was set despite the fact that neither of us had any idea what to expect.  when i told the hub about it, he was super skeptical.  "what do you do at this thing?  walk around and share your virtual pinboards with people you don't know?"  it sounded so lame when he put it that way.  and i had to admit, i had no freaking clue.  but i was excited to find out.

i was shocked when the teen expressed interest in coming with us.  although i guess i shouldn't have been - her buddy rock-ell has a summer job and isn't around to hang out during the week.  plus, the venue for the meetup, urbanic paper boutique, was down in venice beach and the weather was bound to be nicer than the 90 sweltering degrees we were stuck with at home.  we sat in a little bit of traffic and drove around some to find a parking spot on tiny abbot kinney boulevard, but we finally made it.  and it was nice and overcast - chilly, even.  excellent. 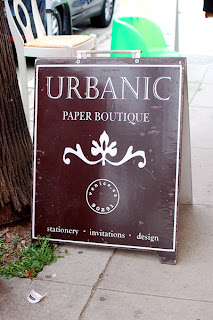 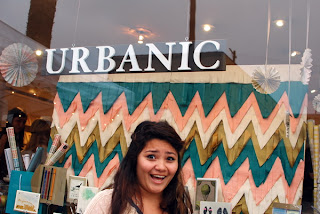 we wrote our names down (real, twitter, and pinterest user) on a nametag, stuck 'em on, and went inside to investigate. 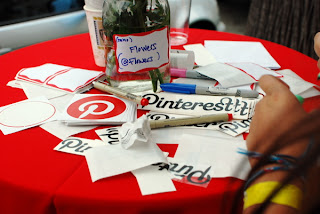 the shop was super duper tiny, but very well stocked with all of the coolest, cutest stuff. 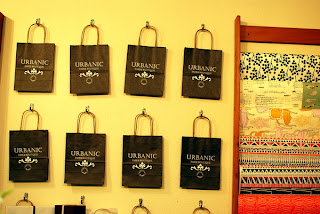 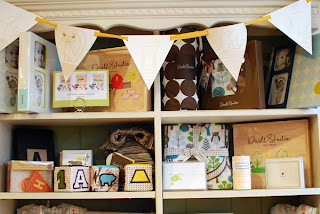 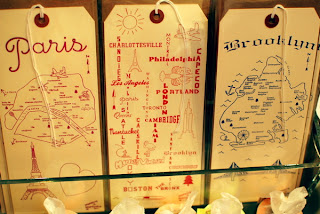 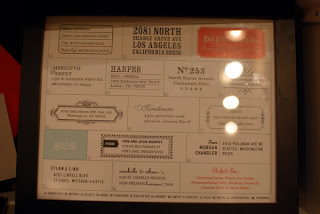 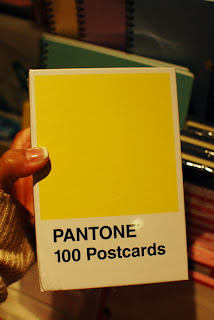 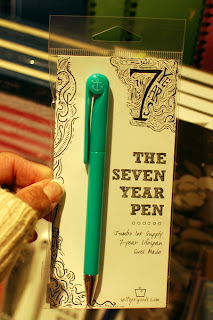 i was almost glad i was flat broke - i could've spent a fortune in there.  awesome japanese washi tape that i've only seen online! 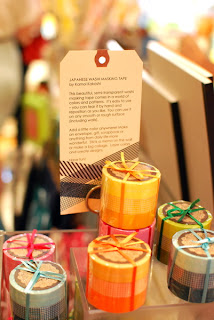 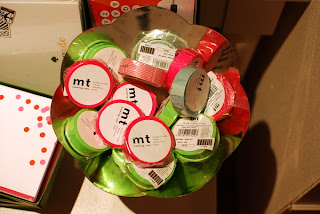 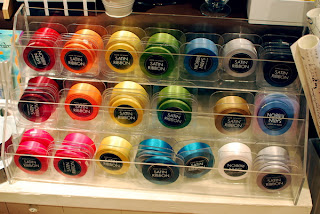 fun party goods that i wanted to scoop up just to have around - and maybe to save for the bean's birthday bash 4.0. 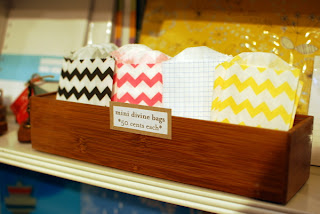 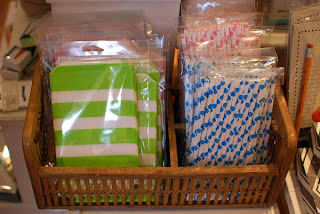 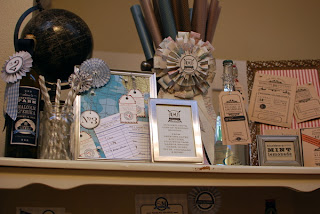 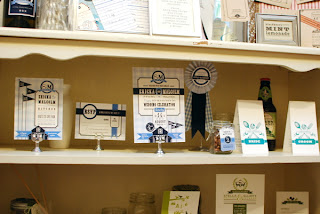 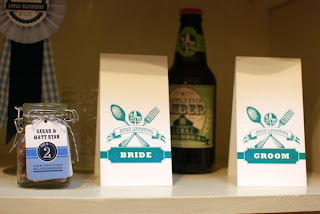 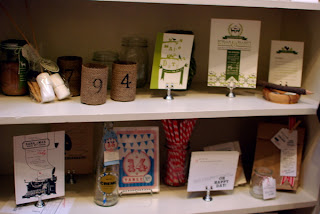 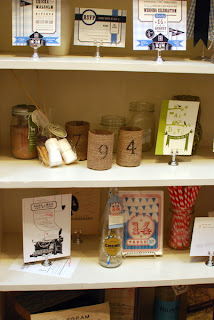 we met and made small talk with enid, the official pinterest representative at the shindig.  but it was so crowded in the tiny shop that i didn't have the energy to ask if we could get a picture with her.  oh, well.  and then we made our way outside into the back, where there were even more super well-dressed, wine-chugging, cookie-munching chicks crammed together.  at least outside, the air was cooler and fresher and easier to breathe.  we managed to grab a few snacks and then just gave up and headed out. 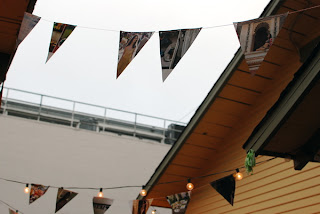 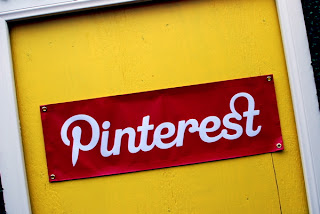 lilcee was super excited to meet the lady behind oh joy!  she's quite well-versed in the cool, hip local bloggers and while i hadn't ever seen this blog until - oh, the car ride down to venice - i enjoyed meeting her as well.  we managed to get the teen to snap this shot of us with her and audrey, the owner of urbanic. 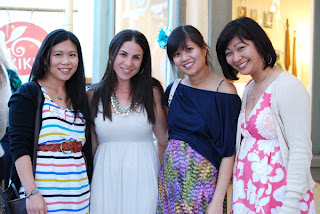 please excuse my weird head tilt, badly styled hair and dress that seemed so cute but actually makes me look like i'm about five months pregnant.  bah.  joy, on the other hand, IS pregnant - adorably so.  i swear, i'm always the doofiest-looking chick in group photos.  ugh.

on our way back to the car, we peeked at this, which had caught my eye as we sashayed to the meetup: 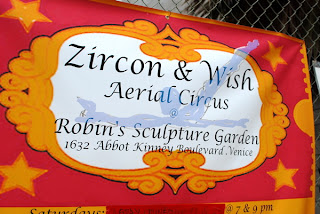 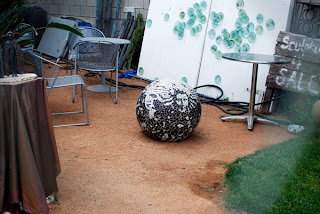 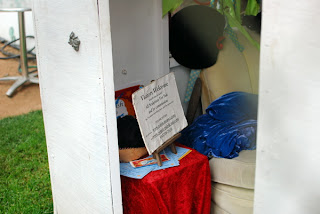 i'd really been hoping that it was a place to take trapeze lessons, but it looks more like some sort of garden or art museum.  i'm so bad at this kind of stuff.  and next door was an interesting-looking shop, but it was closed. 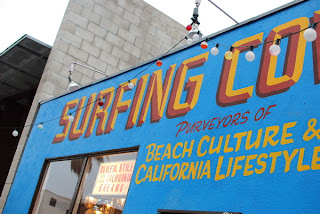 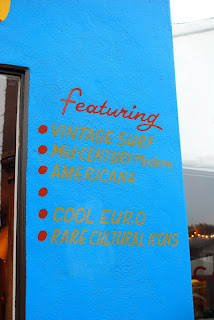 after debating a bit between crossing the street and having dinner at lemonade or having some familiar and oh-so-delicious garlic chicken at versailles, we opted for the latter.  a few of our friends gave lemonade less than glowing reviews, not to mention that a pasadena outlet is opening sometime this summer.  so we figured we'd get our chance to go eventually.

it was a fun evening all in all.  we didn't really mingle a whole lot with the other meetup attendees, but no biggie.  i felt a bit intimidated and overwhelmed as i often do when going out somewhere in west l.a. - the chicks are always so well-groomed, dressed to the nines, aloof.  and then there's me - four weeks late for an eyebrow wax, outfitted in old navy, with an eager, dorky ass perma-grin on my face.  yeah, i don't fit in too well.

Email ThisBlogThis!Share to TwitterShare to FacebookShare to Pinterest
Labels: social media is fun, wan is a happy camper