we're finally winding down on our first season of girl scout cookie sales.  it's been interesting,  it's been a pain in the ass, it's been eye-opening, but most of all it's been fun.  watching the girls interact with the public at our booths has been really entertaining.  like the little poses one of them would strike when she saw someone approaching us last week: 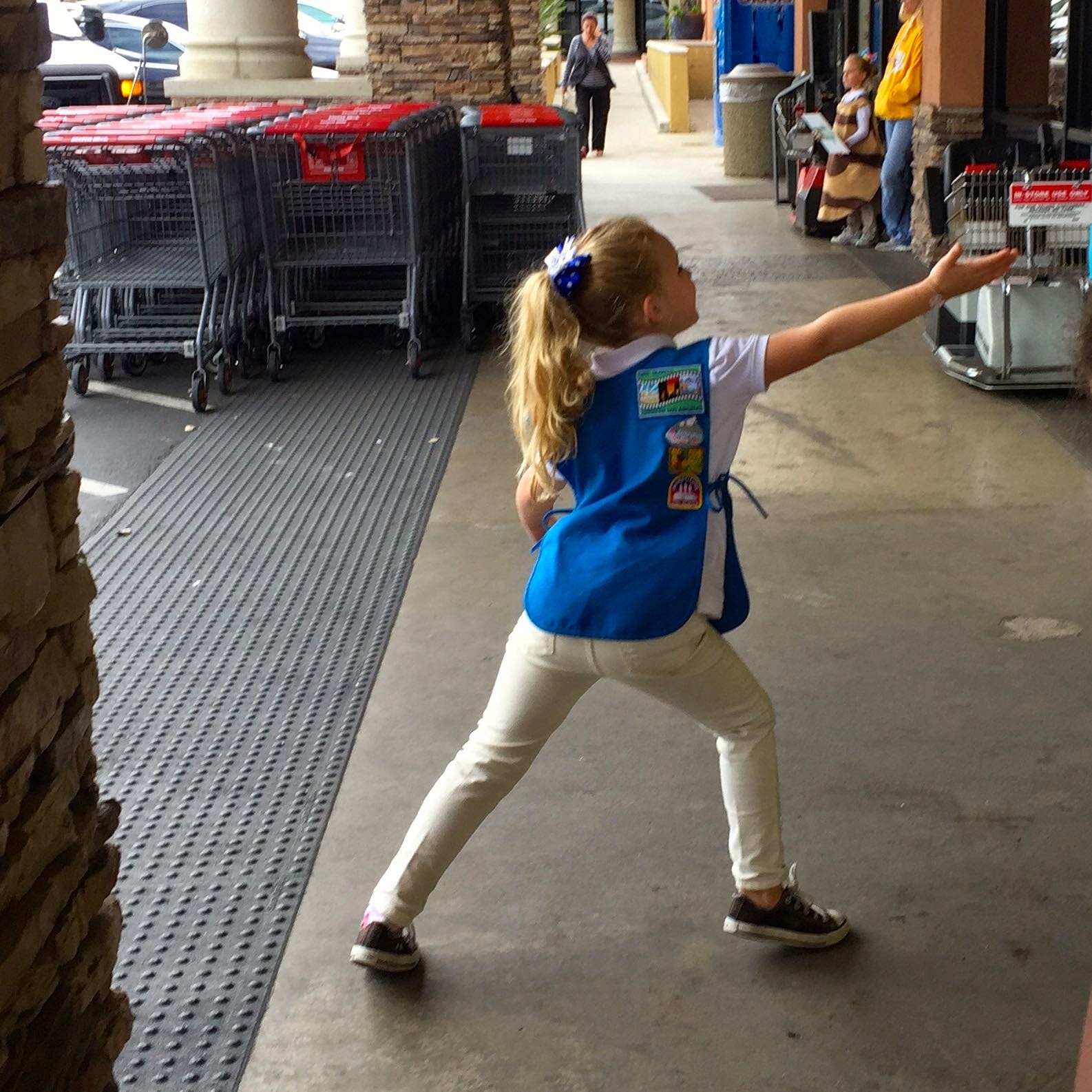 she was cracking me up.  and she brought over quite a few amused buyers, because who can resist a sweet little girl with a smile and a pose?  well, actually, a lot of people did.  and every time she got ignored or told "no," she would turn around and give me this funny little disappointed smirk and i'd just give her the thumbs-up and tell her that she was doing an awesome job.

the bean was fun for me to watch too.  she was always willing to put on one of the cookie costumes (although we had to take them off halfway through as we sold out of both flavors they represented) and ask every person who walked by if they wanted to buy some cookies.  when they declined, she would just say "thank you anyway, i hope you have a great day!"  a couple of those actually ended up coming back after doing their shopping and bought a box.  kill 'em with kindness...it works. 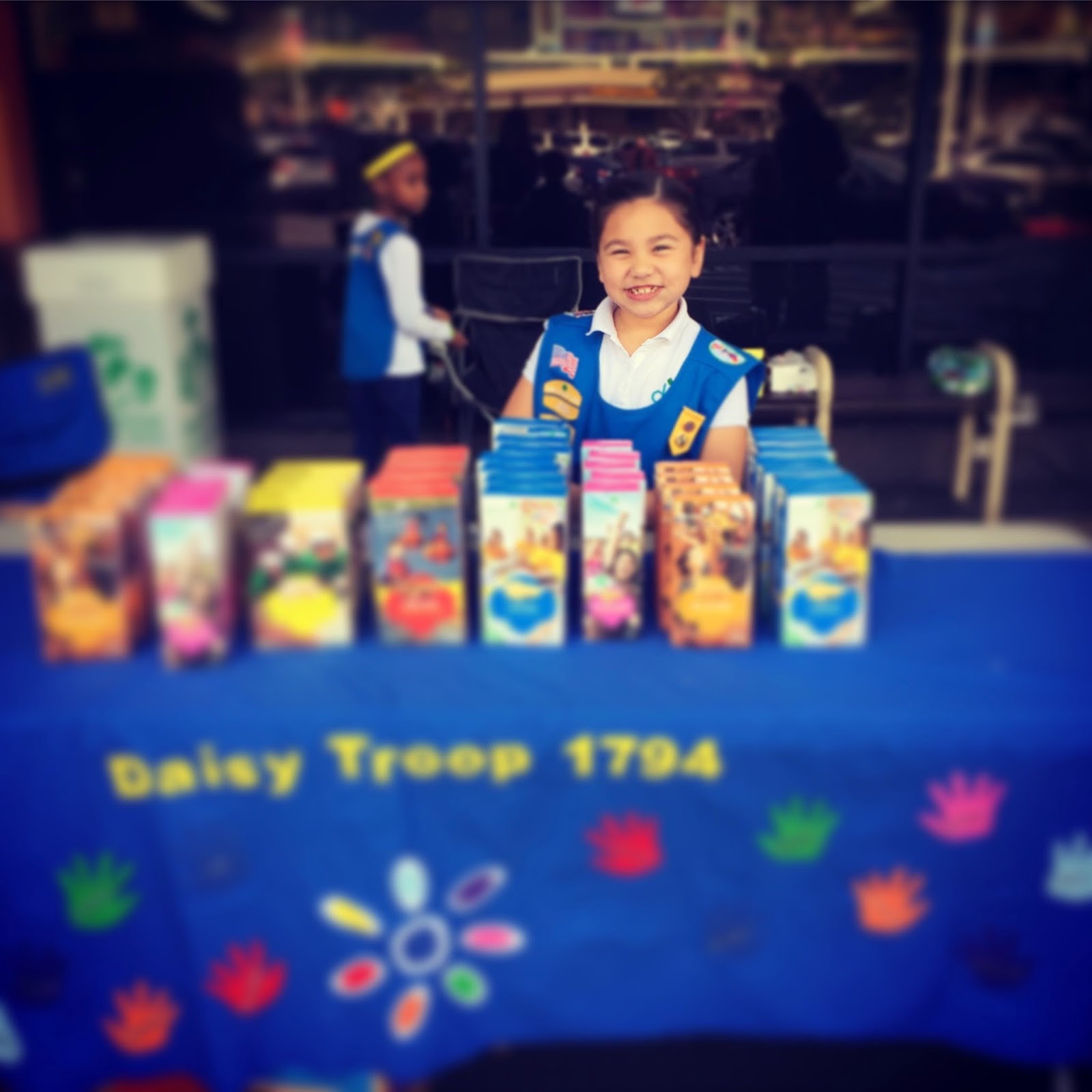 i think maybe she's finally getting tired of taking selfies with her mother.  le sigh. 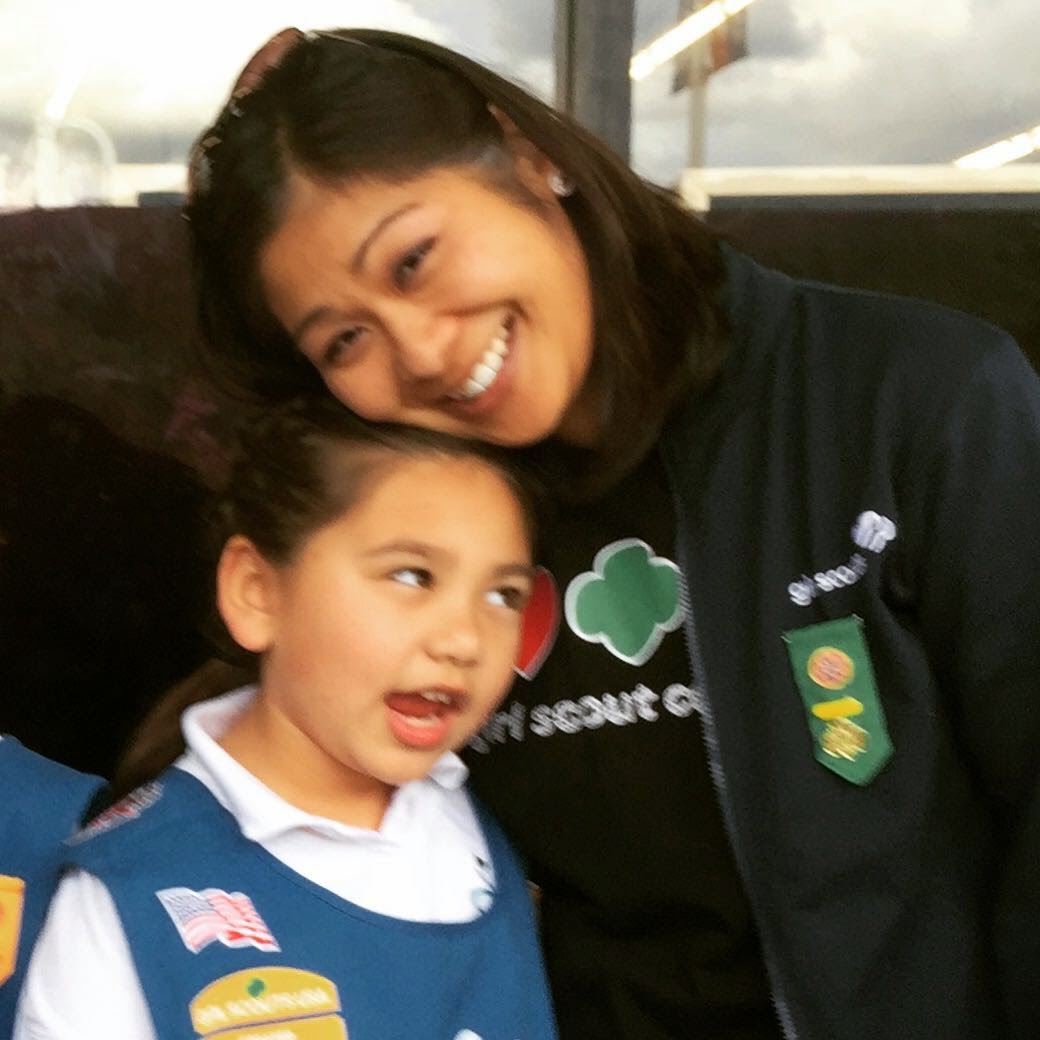 i signed up for a second shift at the local cookie cupboard.  it seemed like they were having some difficulty in getting enough people to come in, and since it's the last week i thought it might be busy with people trying to get that final push on sales for their troops.  plus, it's fun to meet other troop leaders, hear their stories, and not to mention stay on the good side of our service unit manager.  i'm such a kiss ass, i know.

while the cupboard wasn't exactly bare, the amount of cases was definitely dwindling down.  it was easy to see which flavors were harder to push than others.  like the trefoils, which surprised me.  i thought shortbread was one of the favorites.  that's one of the classics, and yet the stack of remaining boxes was taller than me. 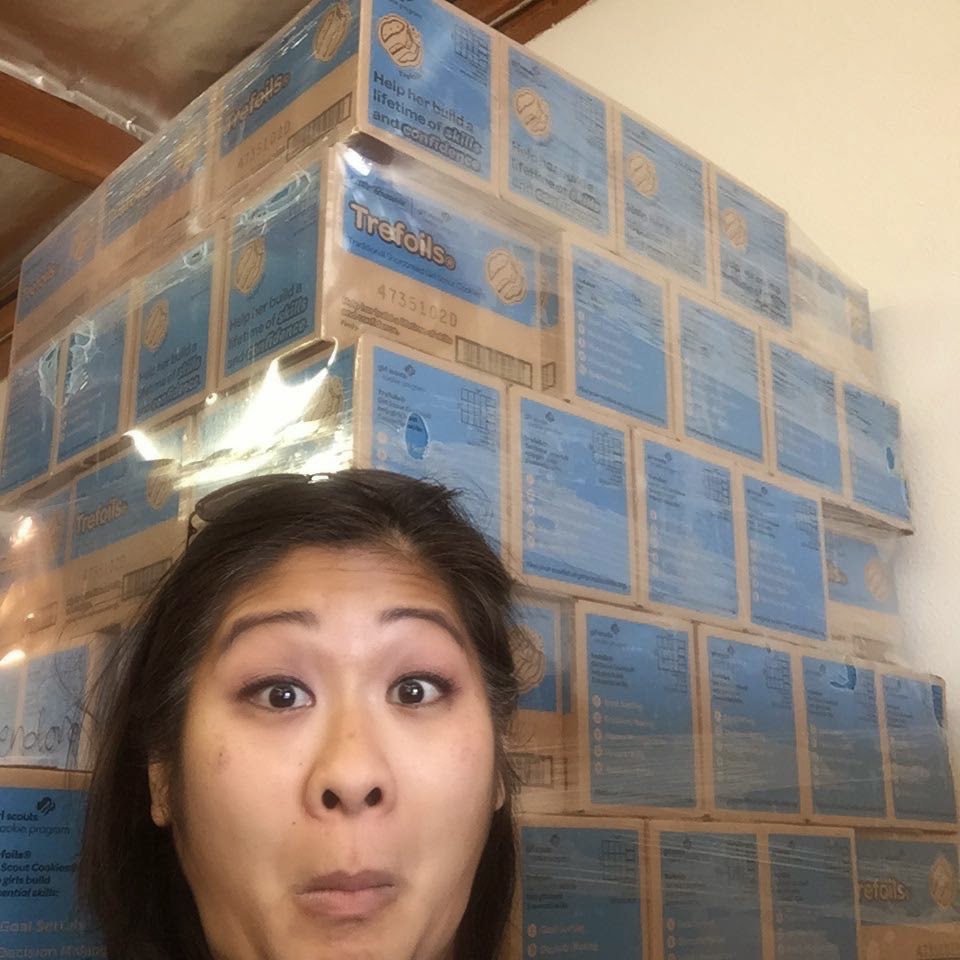 this year's newest flavor, the "rah rah raisin," wasn't faring so well either.  i suppose an oatmeal cookie with raisins and greek yogurt chips isn't as fun as something covered in chocolate. 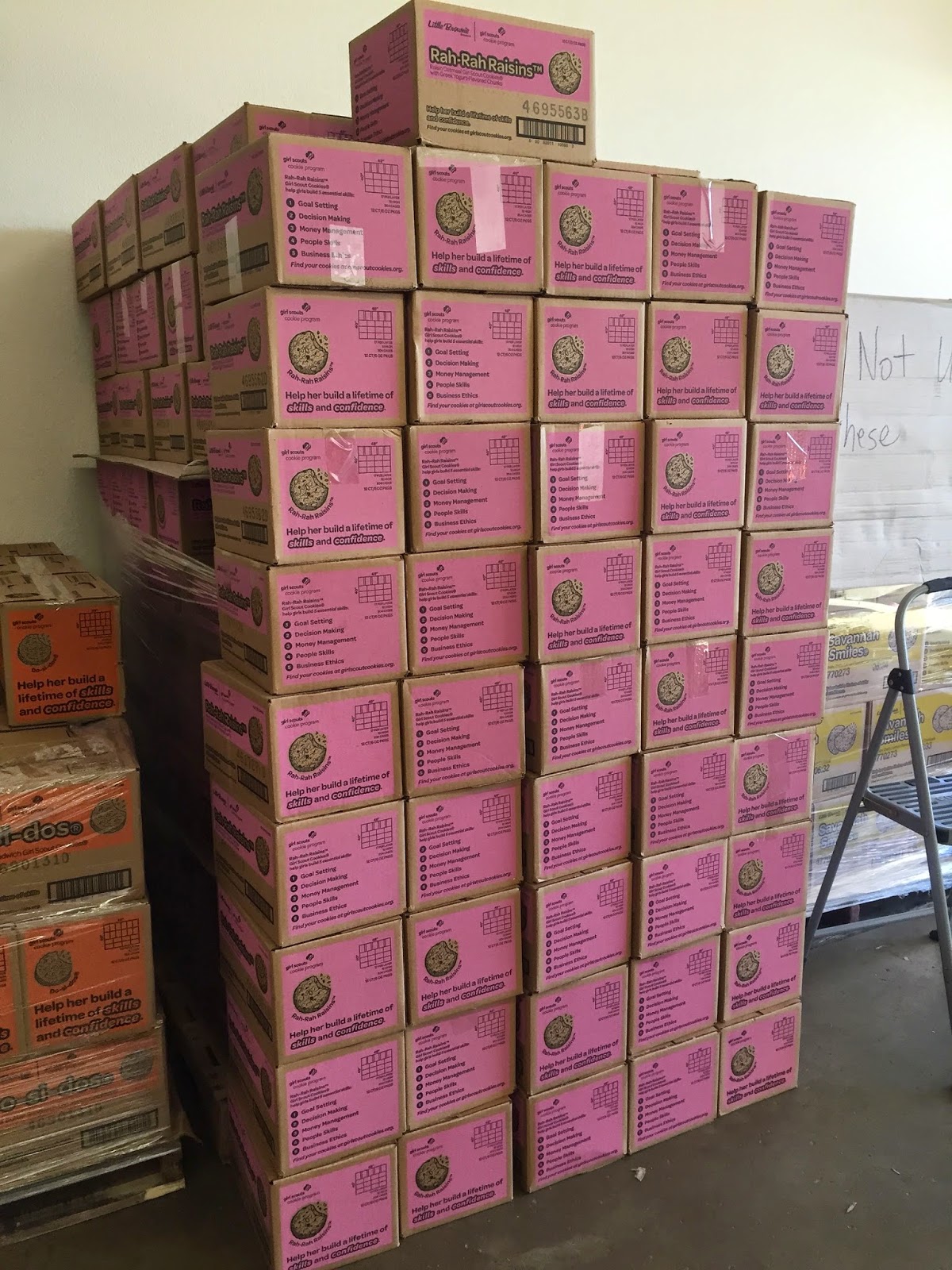 and the gluten-free flavor, the "toffeetastic," should be renamed the "craptastic."  i've heard mixed reviews on these - some people think they're delicious, others said it was dry and flavorless.  different strokes for different folks, i know, but i'm willing to bet that the $6 price tag on these is what puts people off the most. 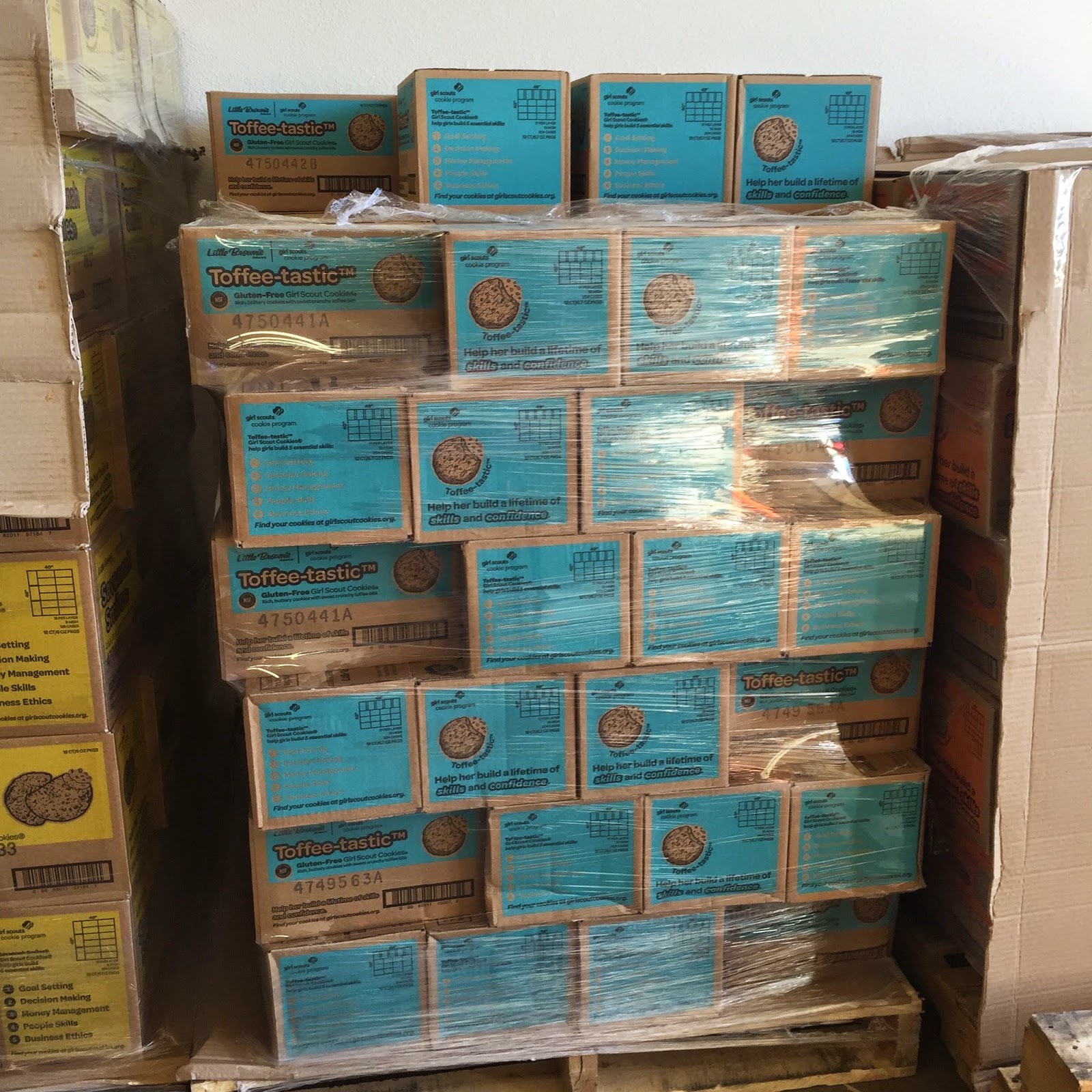 the bestsellers were still in decent supply too.  this is what's left of the samoas and tagalongs, and with final booth sales going on this weekend i'm sure there won't be a ton of these left over. 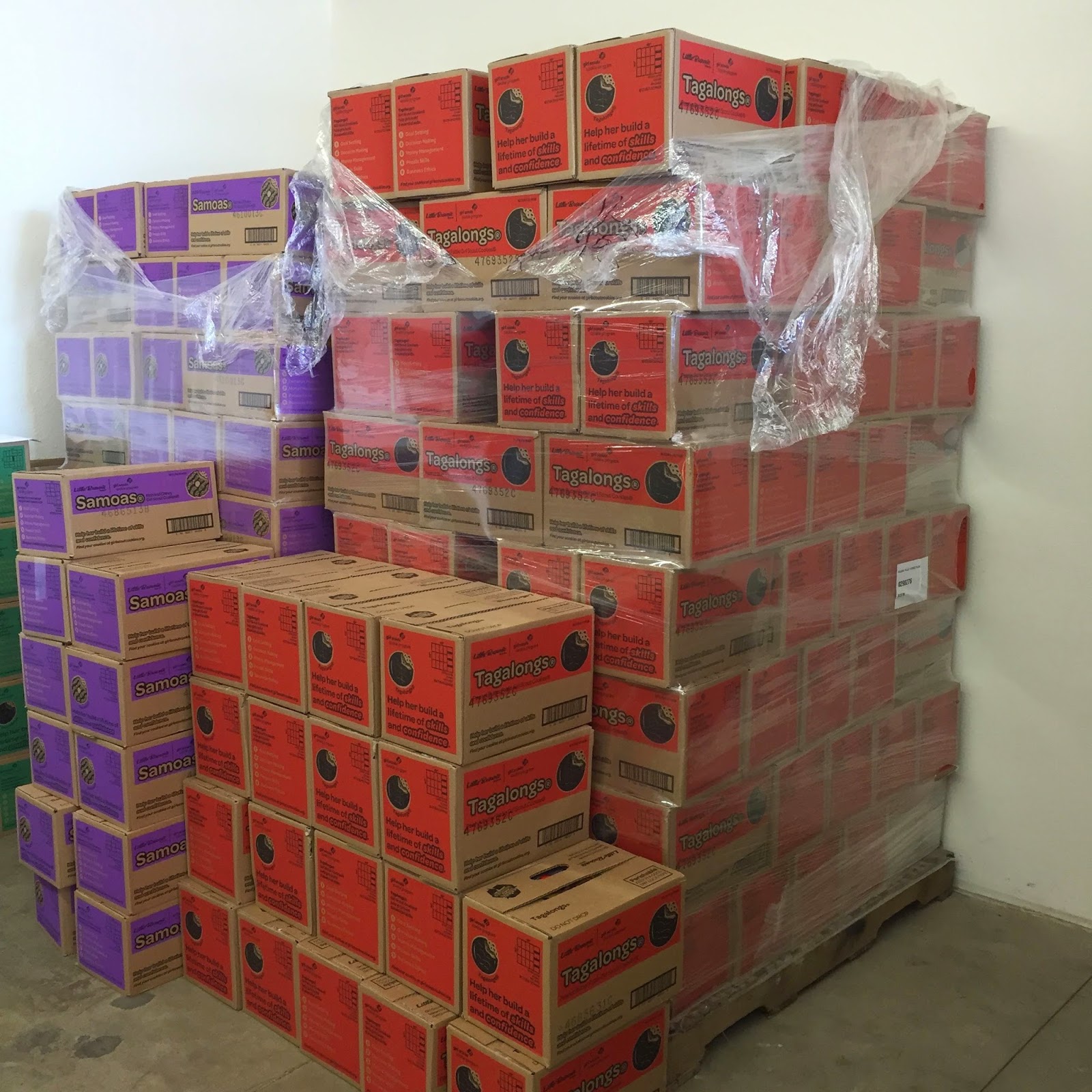 see the space between the stacks of cookies?  that's where the thin mints used to be.  for some reason, they went like crazy this year and cupboards all over the country completely sold out of them a week and a half before the end of the sale. 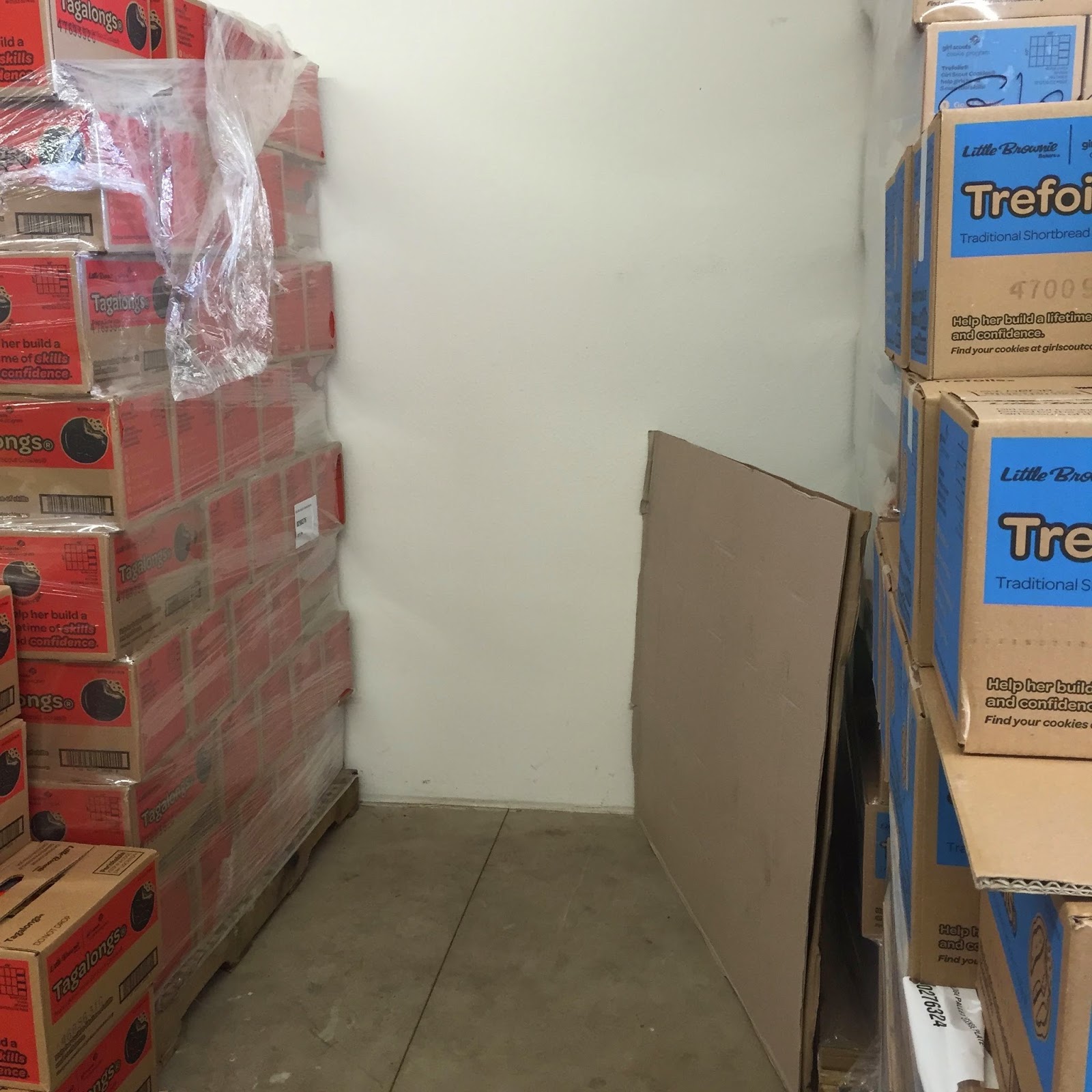 i was amazed to hear that other troops booked tons and tons of booths for their girls - weekends and weekdays alike.  one of the leaders i was working with at the cupboard said that they did 19 booths altogether.  holy crap.  made our paltry 3 bookings seem like child's play.  and yet i found myself just exhausted after each one.  maybe that's just old age.

our final booth is this saturday in front of a local grocery store in the northern part of town.  it's a fairly busy shopping plaza, and we'll be armed with a decent number of cookies and signs telling people that it's their last chance before the end of the sale.  i'm hopeful that we'll sell out, which would be awesome.