when my friend nessdogg asked via twitter if anyone was interested in going to the scandal panel at this year's paleyfest, i'm pretty sure i let out a little squeal or something.  i adore that show, and have been addicted to it ever since spring break last year, when the hub and i both let ourselves get sucked into it via netflix.  we managed to get a nice little group together, and after grabbing a quick dinner at hollywood & highland, we made our way towards the dolby theater - yup, where all those oscars were handed out just a couple of weeks ago.  the cast of "girls" had done their panel just a few hours before we got there. 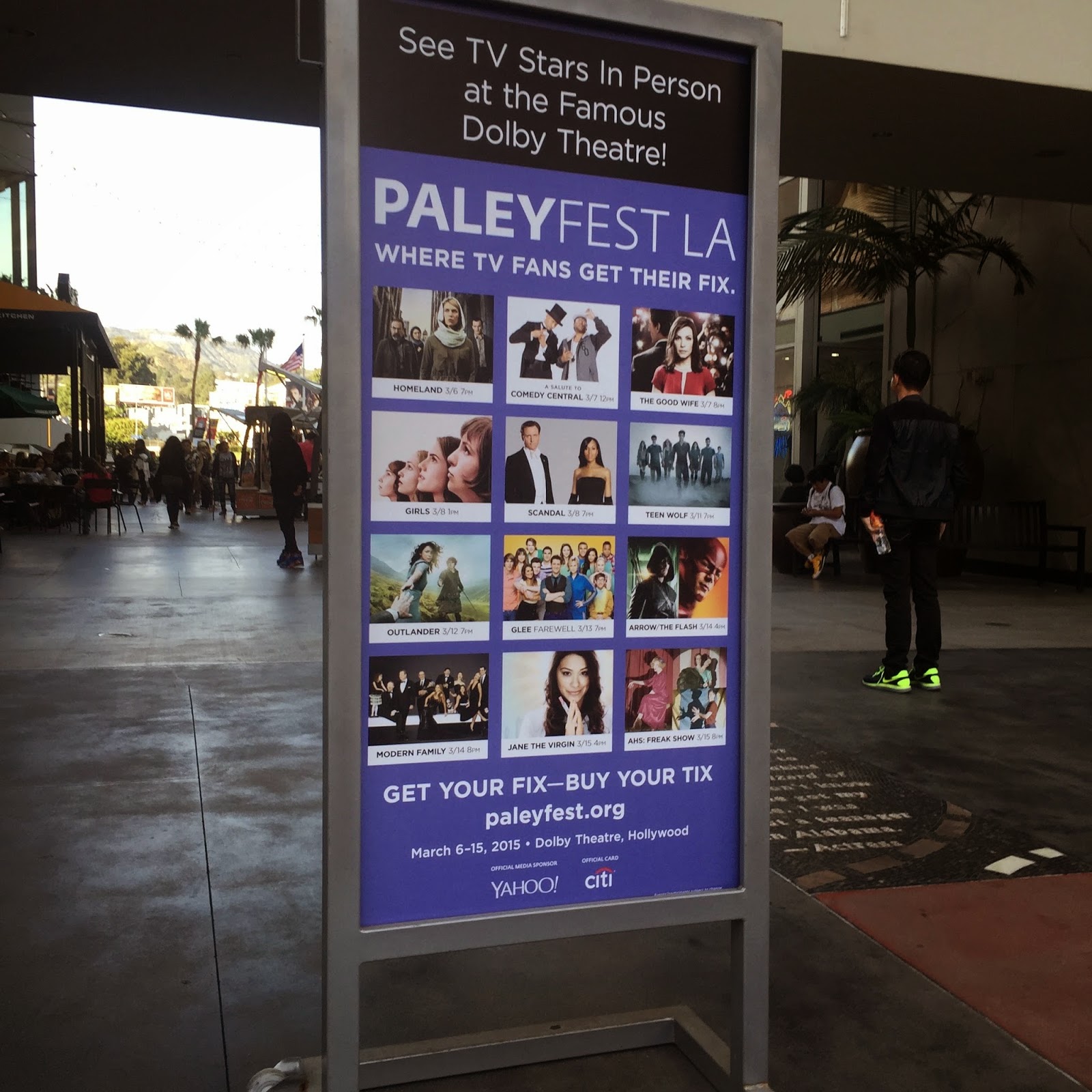 as we waited for one of the girls to take a potty break before going inside, something caught my eye.  because only in hollywood can you find a vending machine...for caviar. 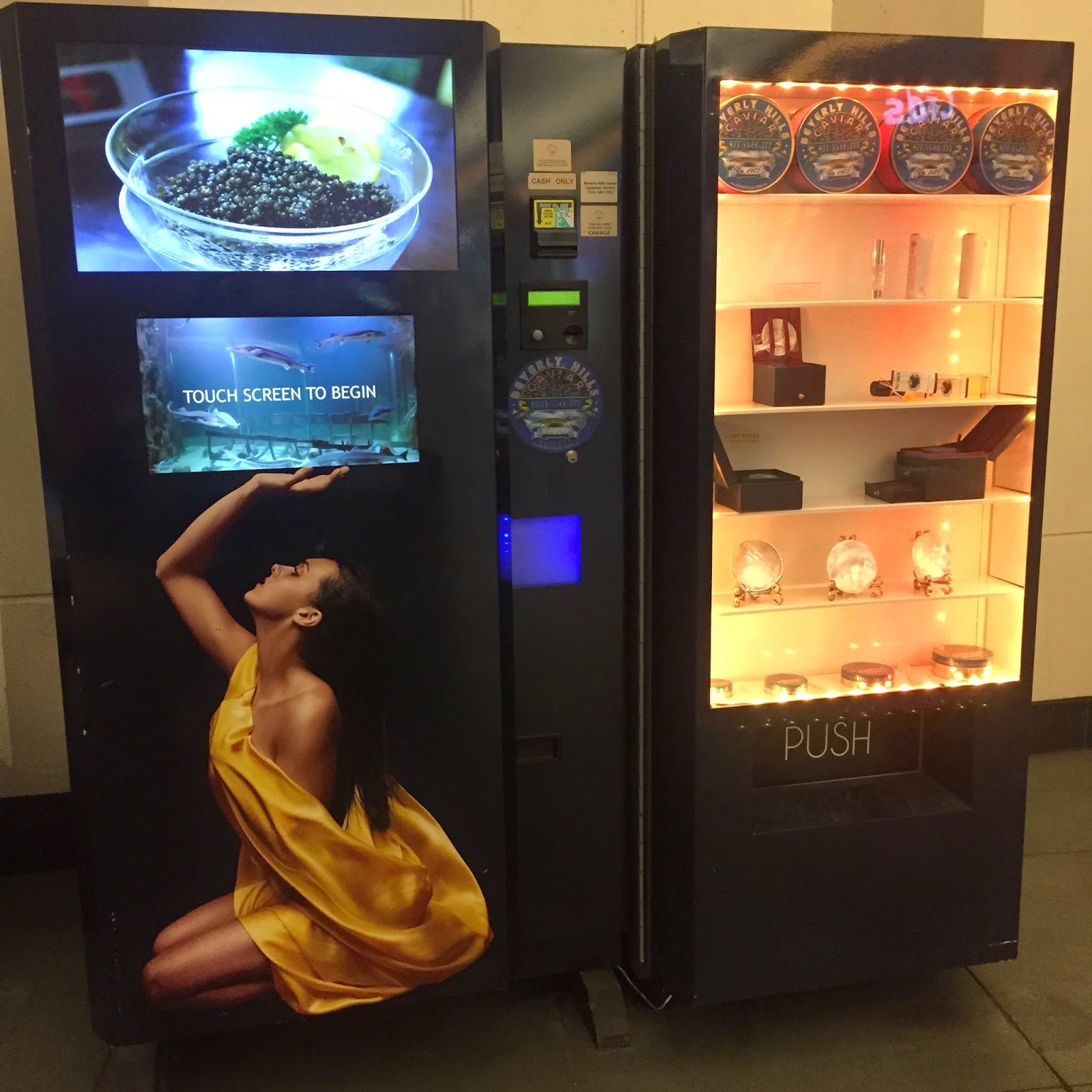 curiosity got the best of us, and so duh - of course we touched the screen to check out the selections.  look at this craziness: 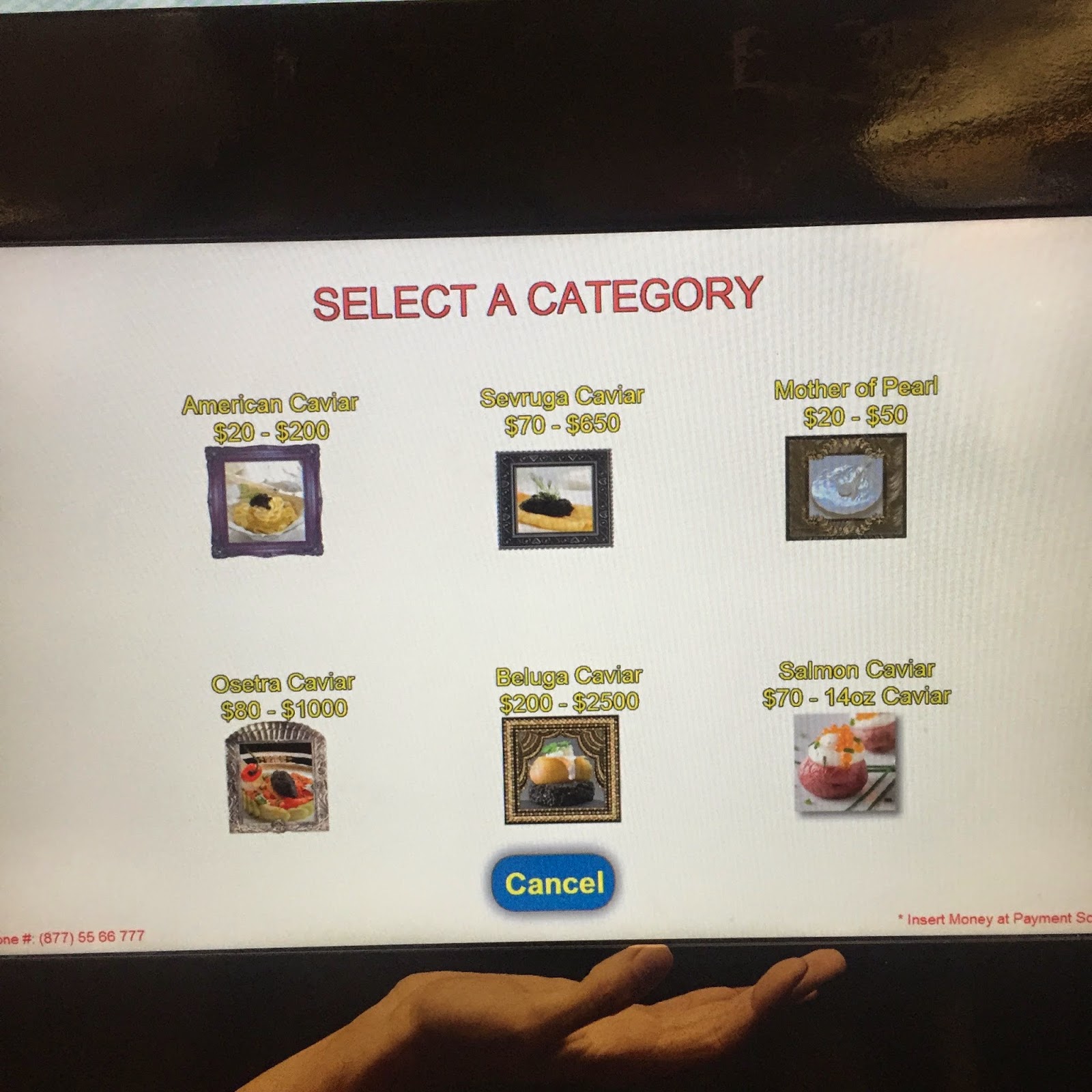 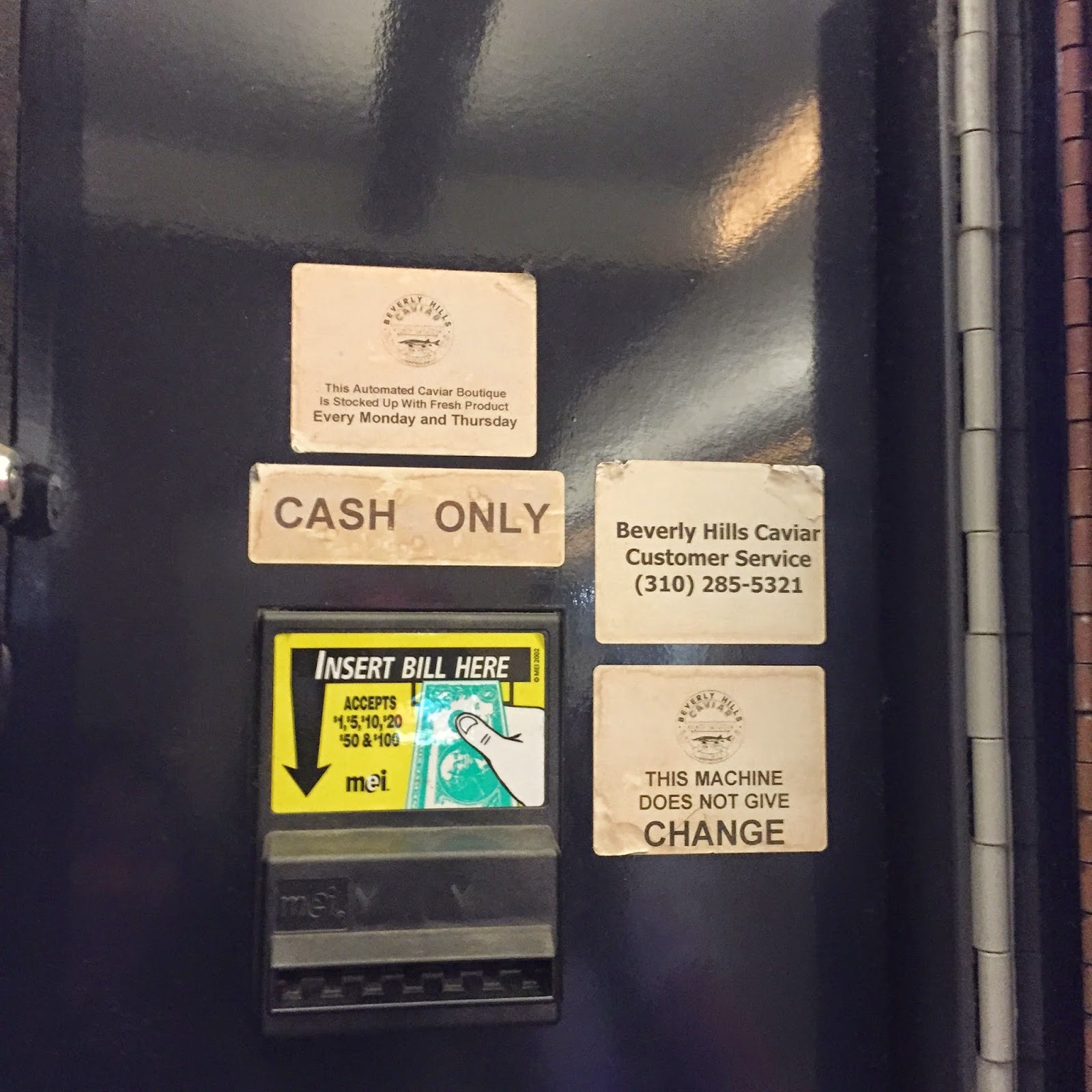 also filed under the "only in hollywood" category, this: 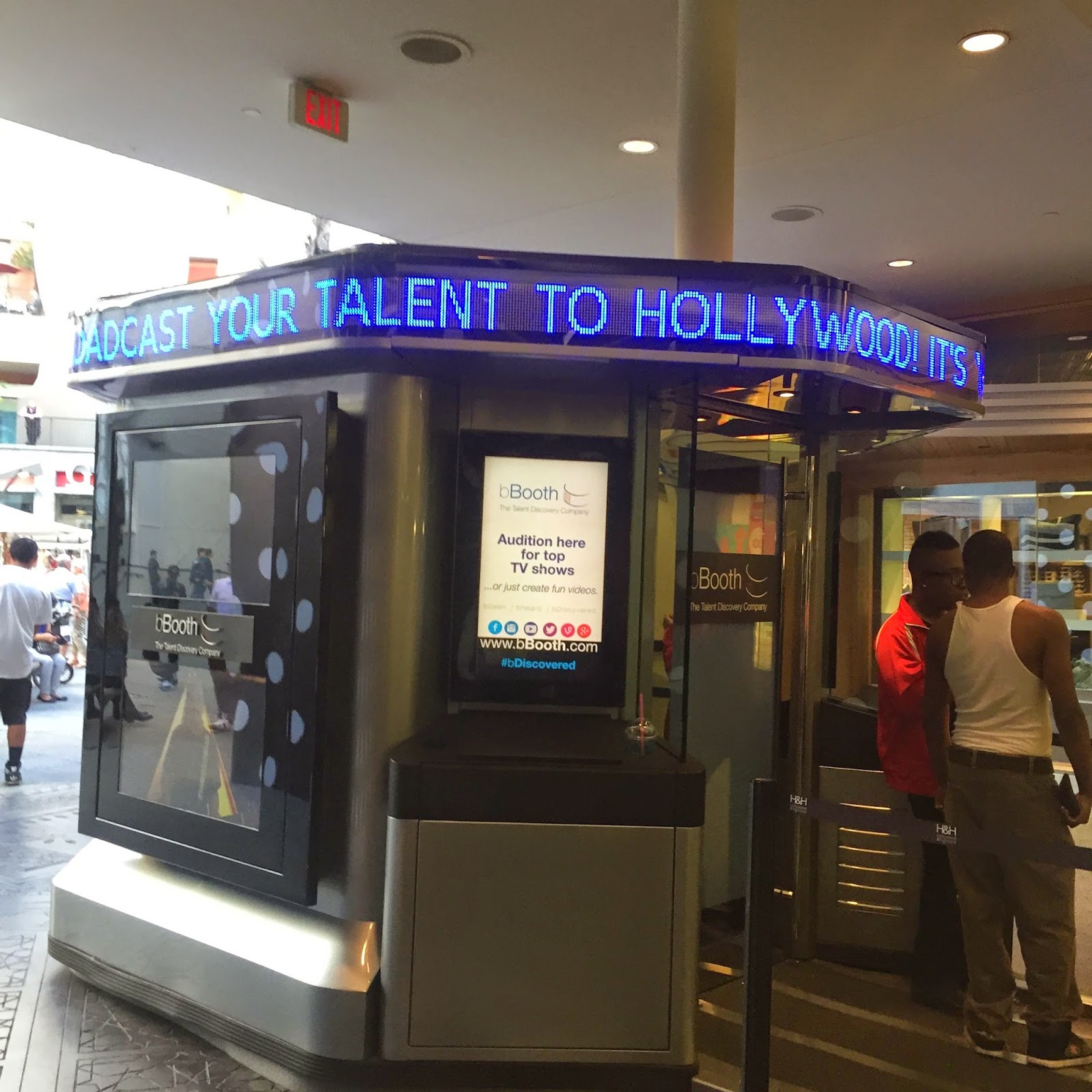 the level of excitement grew as we made our way inside and found our seats.  sure, we were on the balcony, but we still had a great view. 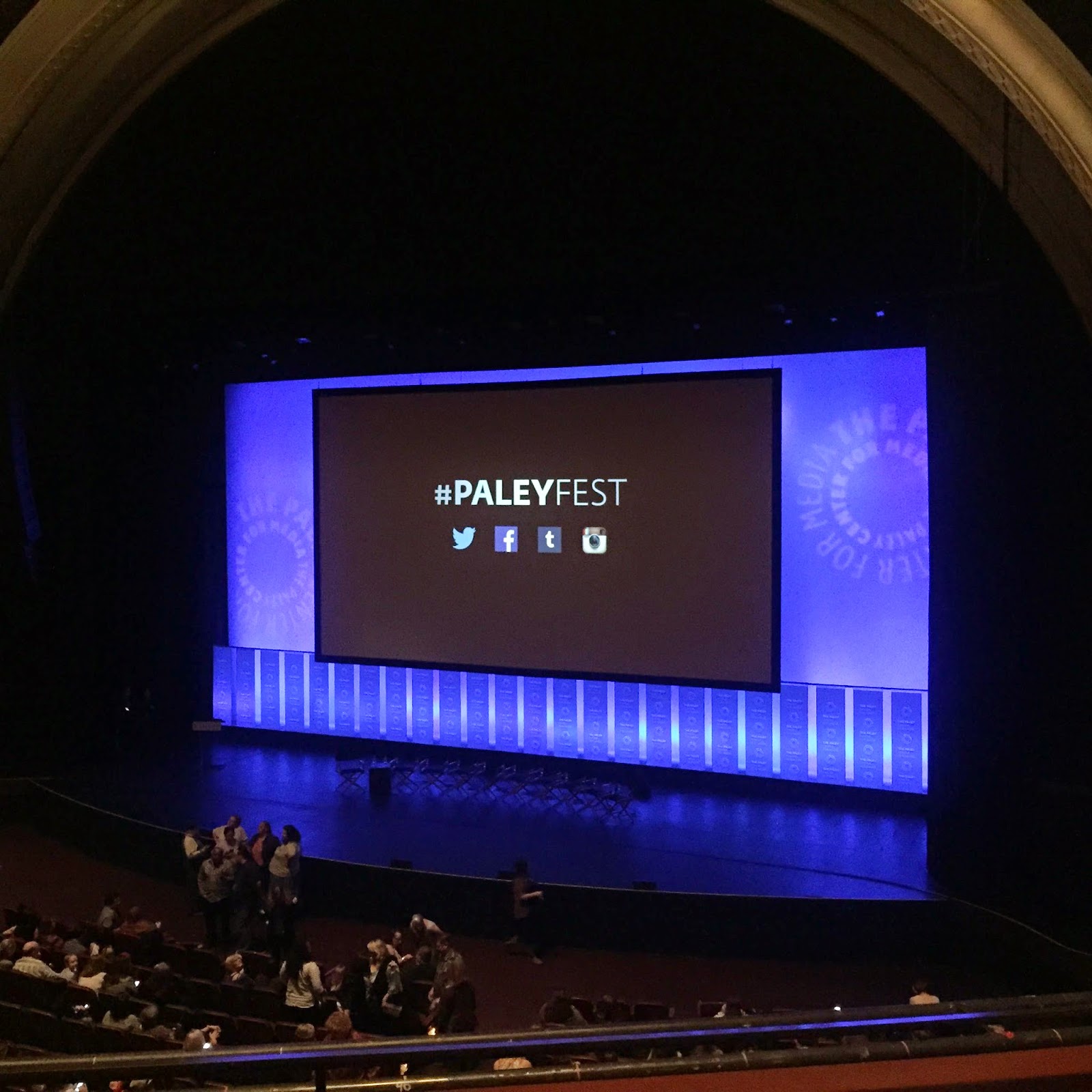 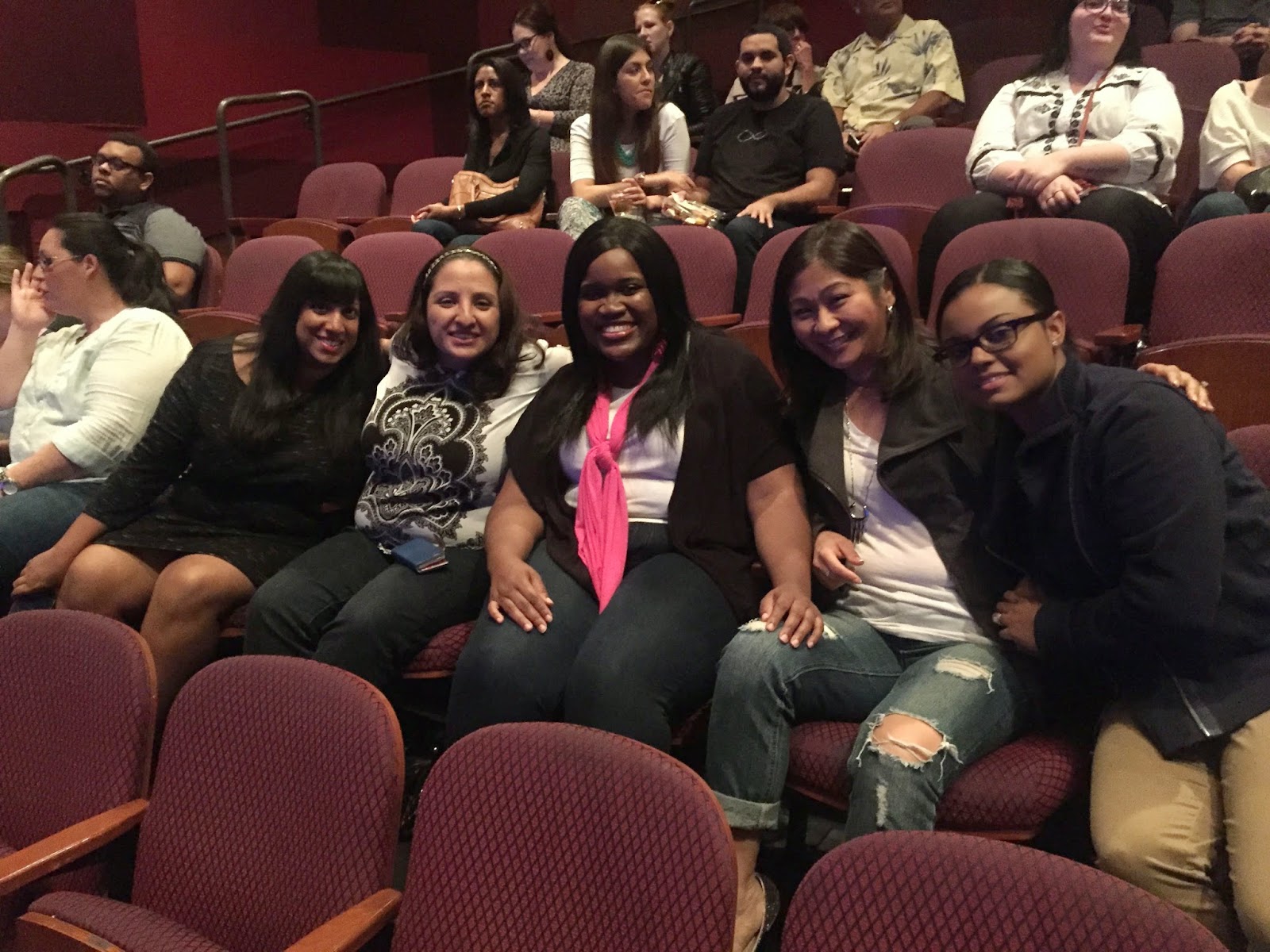 apparently, it was good enough for cameramen to set up nearby - likely for the live feed that was being broadcast online. 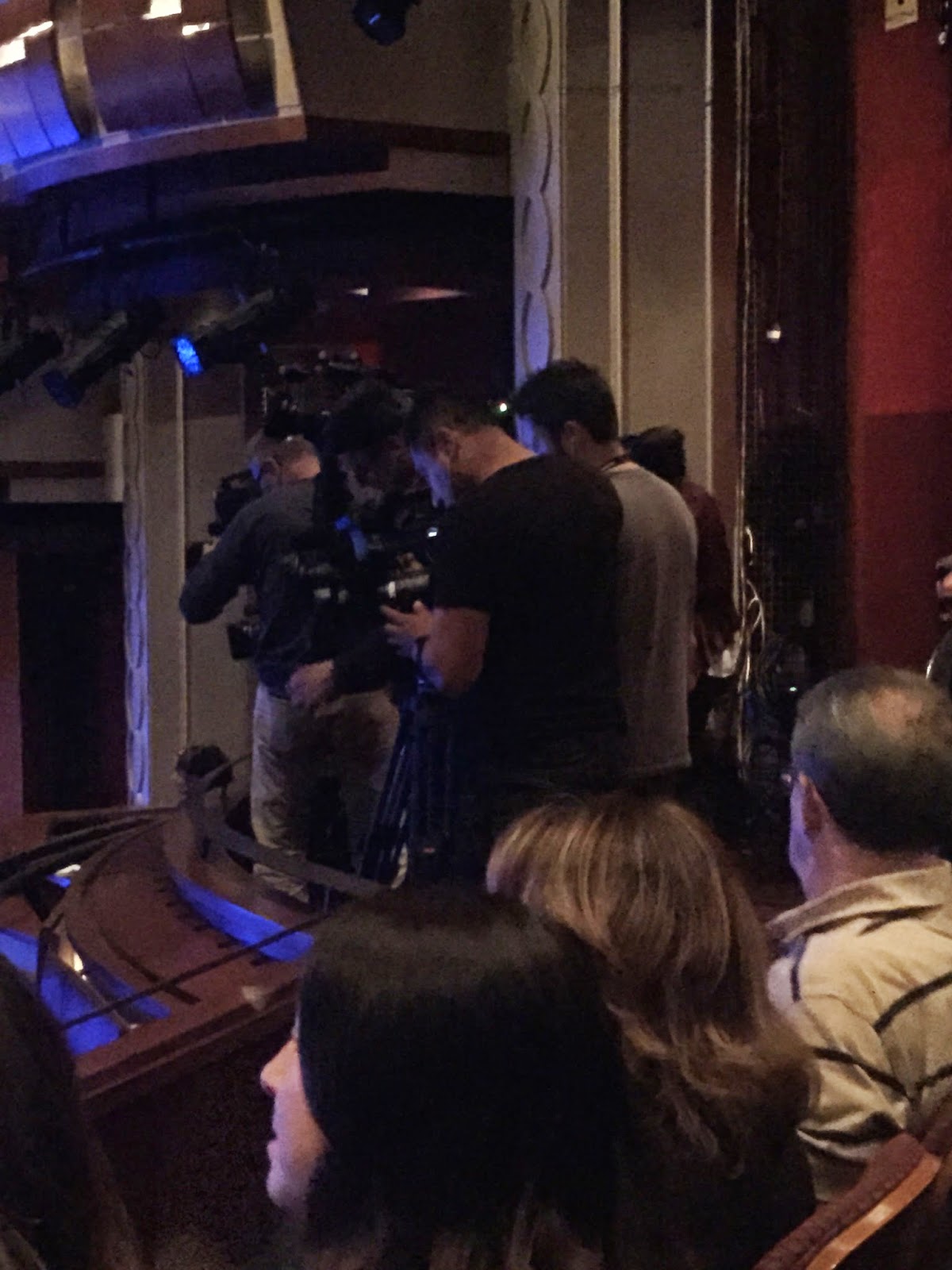 i hadn't had a chance to watch the most recent episode, which i was a little bummed about until we heard that the episode being screened for us was that one i'd missed.  yay for me!  and as the girls warned me, it was a particularly heart wrenching storyline that had me in tears more than once.

when it was over, our moderator for the evening was introduced.  another surprise - jimmy kimmel! 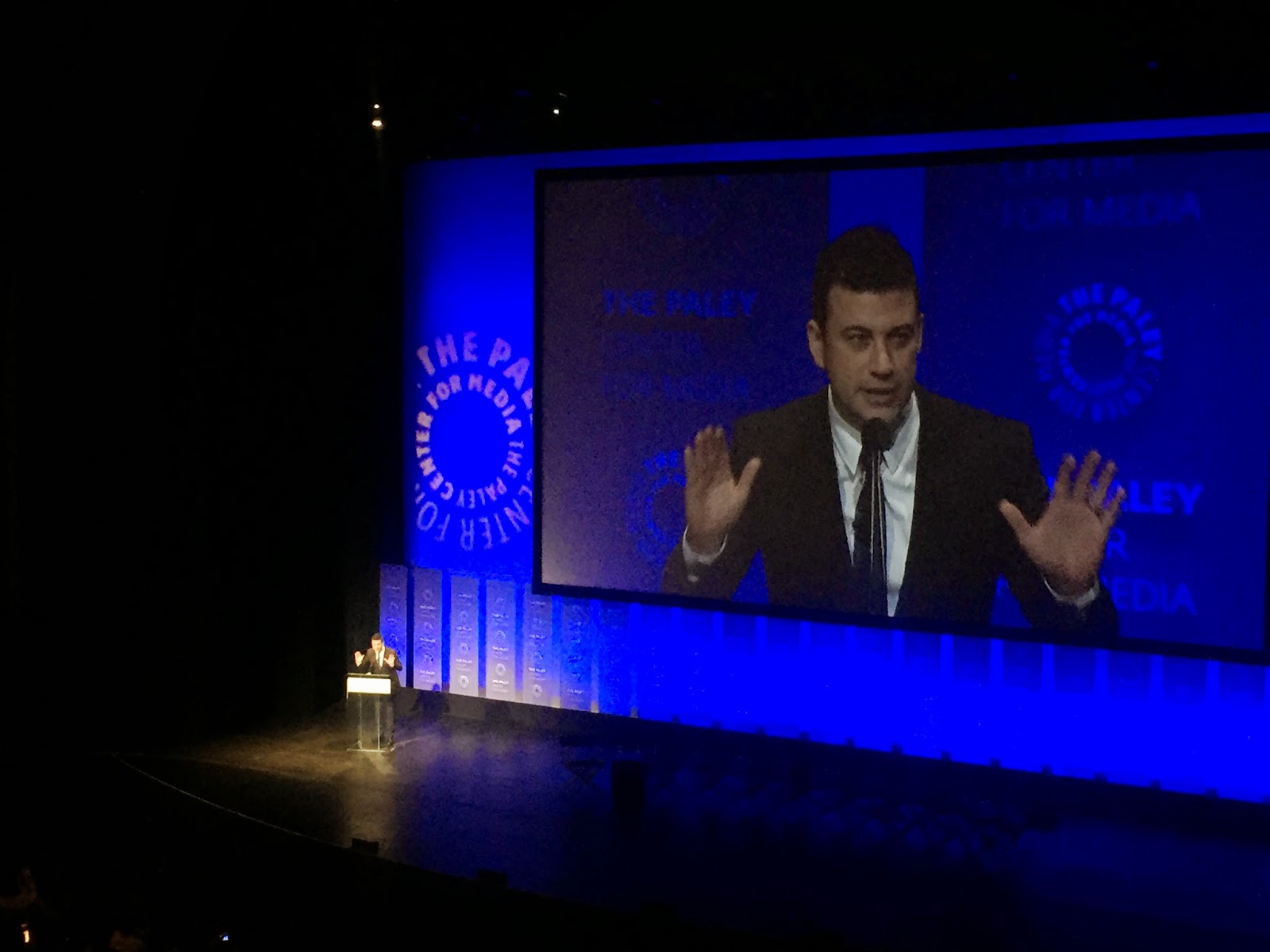 there was a whole lot of hooting and hollering as the cast was introduced one by one.  oh, and other people might have been cheering too.  heh. 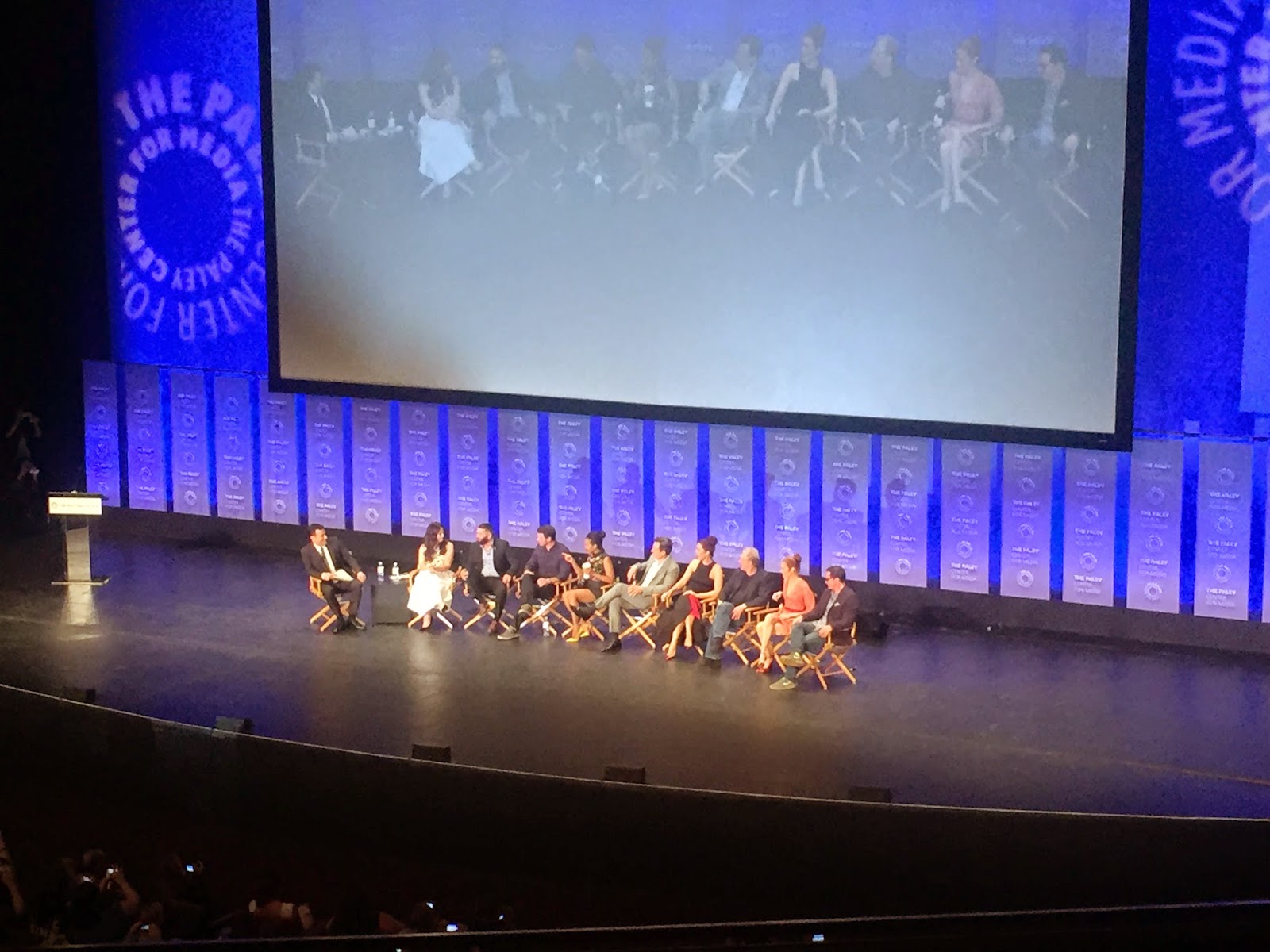 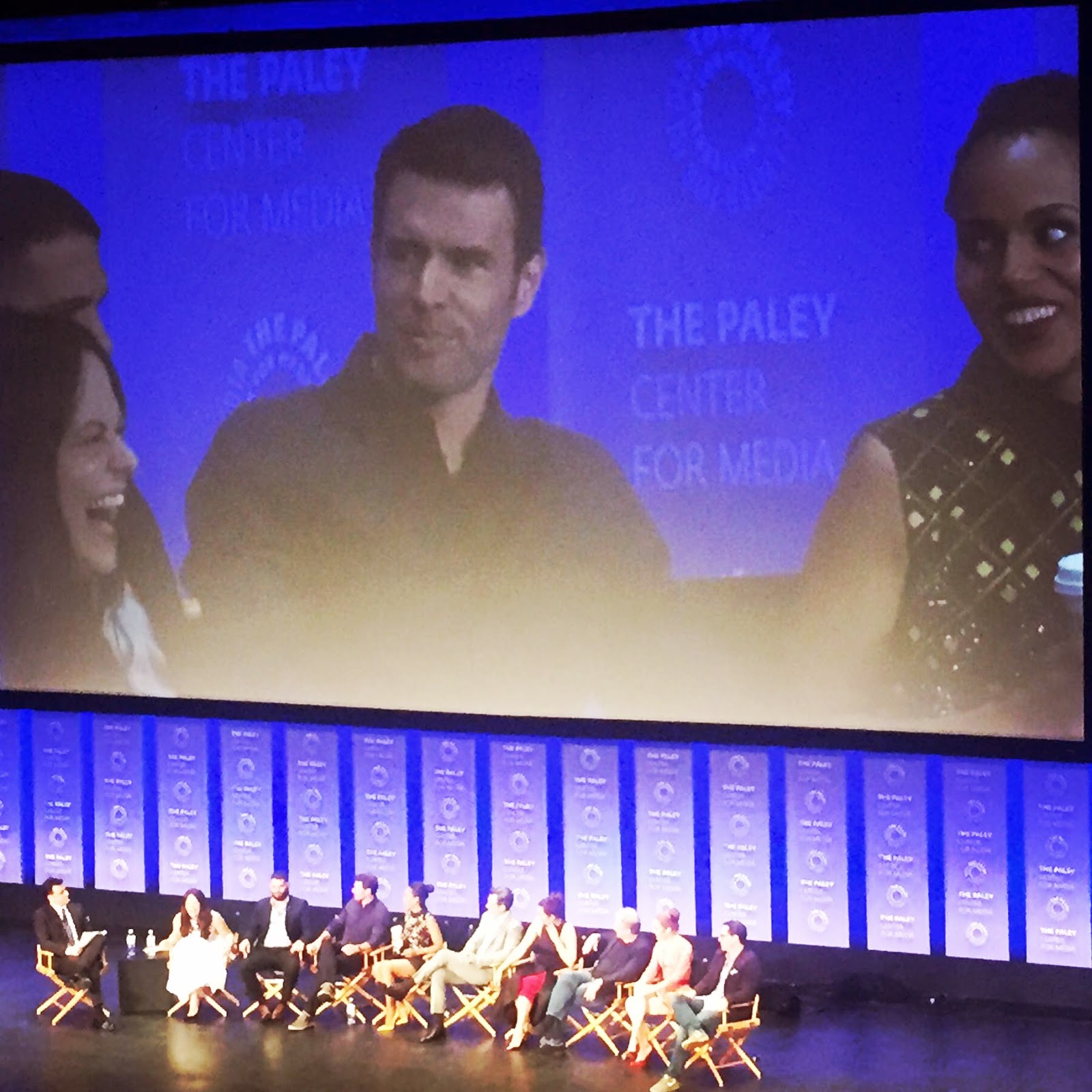 it was a pretty fantastic hour of insider stories, a bit of story and character discussion, and a handful of questions from the audience.  it started to go downhill a bit when one rather overzealous fan informed the cast that a chunk of their ratings were thanks to him "making his clients watch the show every week." then he followed it up with a question about how they dealt with real-life scandals and then not-so-subtly brought up columbus short, who had exited the show at the end of last season amongst reports of some personal problems.  the entire cast went silent and stone-faced, and as the camera focused in on kerry washington, she was visibly annoyed at the laughter and cheering from the audience.  she kept it classy though, as she does, and then jimmy moved on to one final question.

the woman who was given the chance to close out the discussion with her question was a bonehead, though.  likely due to some pre-gaming, she told the cast that it was her birthday and then made an attempt to bring up columbus short again.  amidst boos and jeers from the audience, she persisted in her stupidity (which jimmy tried to divert by starting to sing the birthday song) and finally blurted out "if you could pick anyone to play olivia, who would it be?"  ever the professional, kerry replied "i would choose judy smith (the real-life olivia pope)," and then that was that.  as soon as it was over, the fans on the lower level basically bum-rushed the stage, hoping for autographs and selfies.  and they sure got 'em. 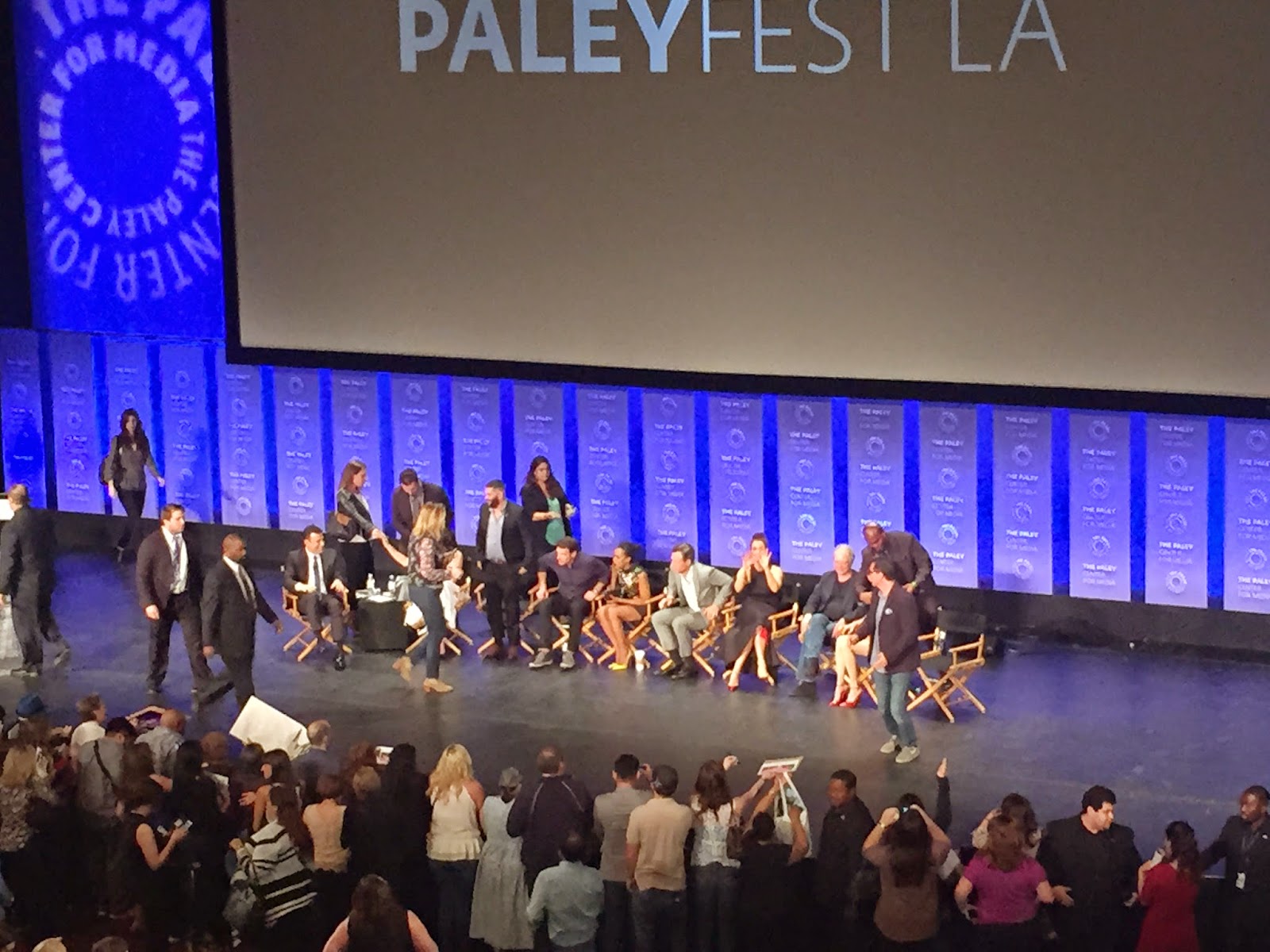 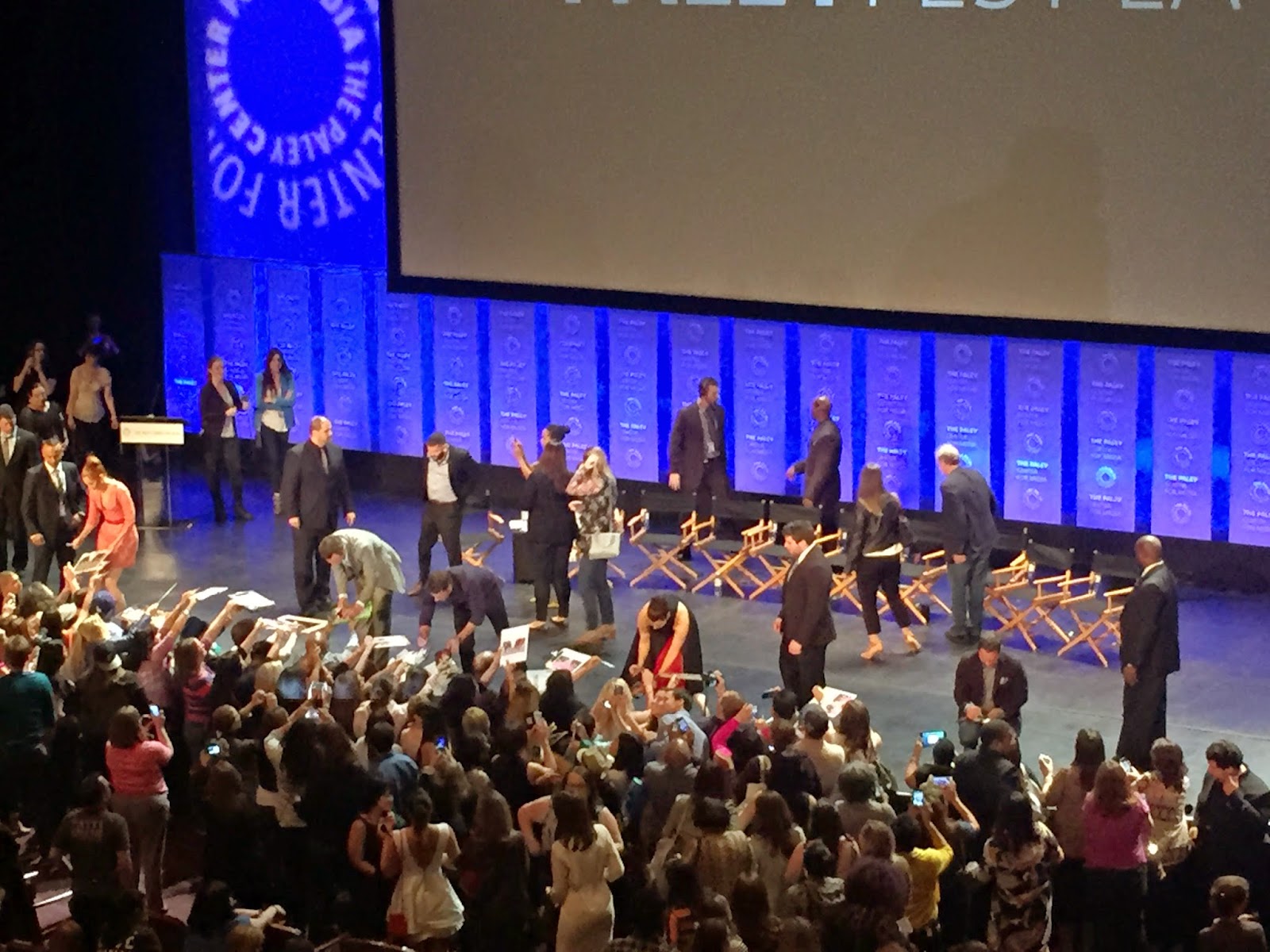 all we could do was watch from above, knowing that it would be damn near impossible to get down there.  we settled for another group picture with the cast in the background instead. 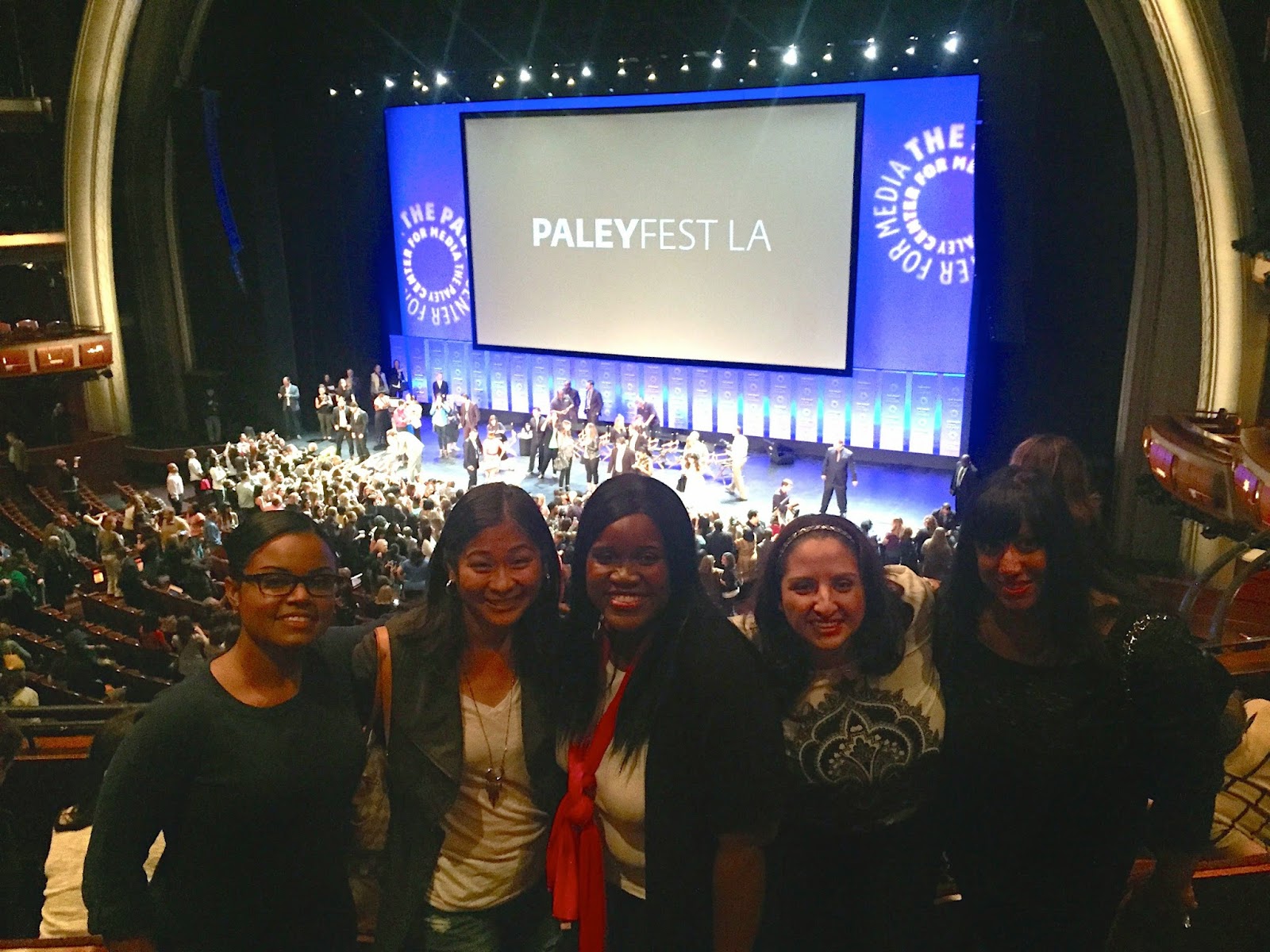 when the others veered off to hit the restroom, my friend aline and i hung out in the lobby, just peoplewatching and chatting.  and then she suggested that we go back into the auditorium to see if we could get a better view.  you know me - i don't have to be asked twice.

so we headed back inside, this time on the bottom level, all the while wondering if we'd be stopped by ushers or security.  when we reached the bottom of the first set of stairs, roped off with an usher standing guard, we flashed him a smile and asked very politely if we could possibly get any closer.  he glanced around, stood aside to let other fans out, and mumbled "go.  go now, quickly."  and we did.

we reached a second rope that was all that stood between us and the stage, manned by another usher who seemed rather overwhelmed at the crowds that were trying to get past him.  and then as he stepped aside to let people out, most of the people in front of us rushed through and then we were at the front.  we made small talk with him, commiserating over the difficulty of dealing with rabid fans, and then when he moved the rope again for people leaving, i gave him a big ass kool-aid smile, grabbed aline's hand, and we scampered down to the stage.  success!

while we were still too far away to actually meet anyone, we did snap off quite a few decent shots that were far better than anything we could've gotten from our seats up above.

hey, tony goldwyn.  i may still have a mental block about you because you were the bad guy in "ghost," but i sure do love me some president fitz.  and scott foley - sigh. 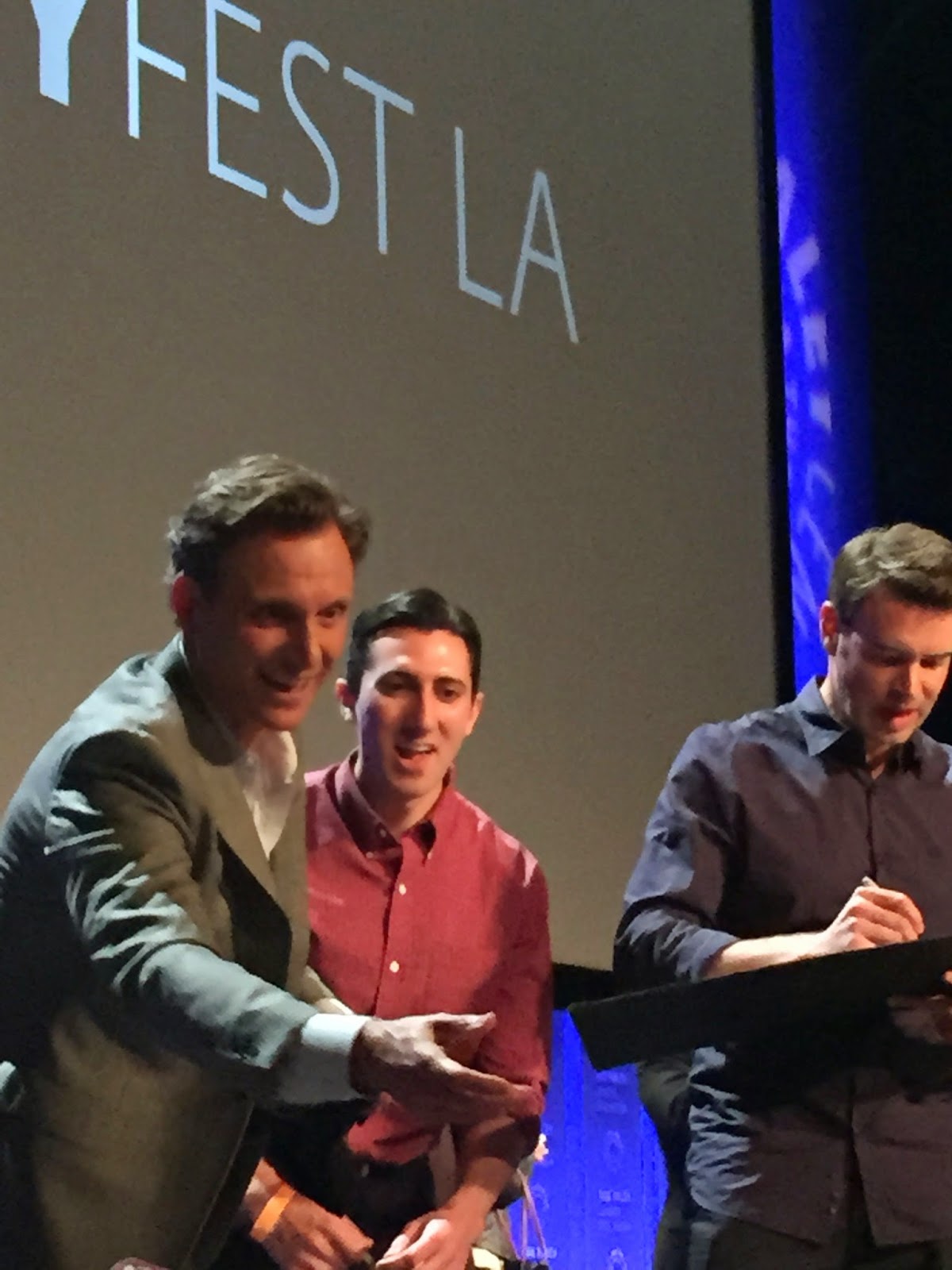 as he was preparing to take a selfie with this fan's phone, it rang.  and he answered it. 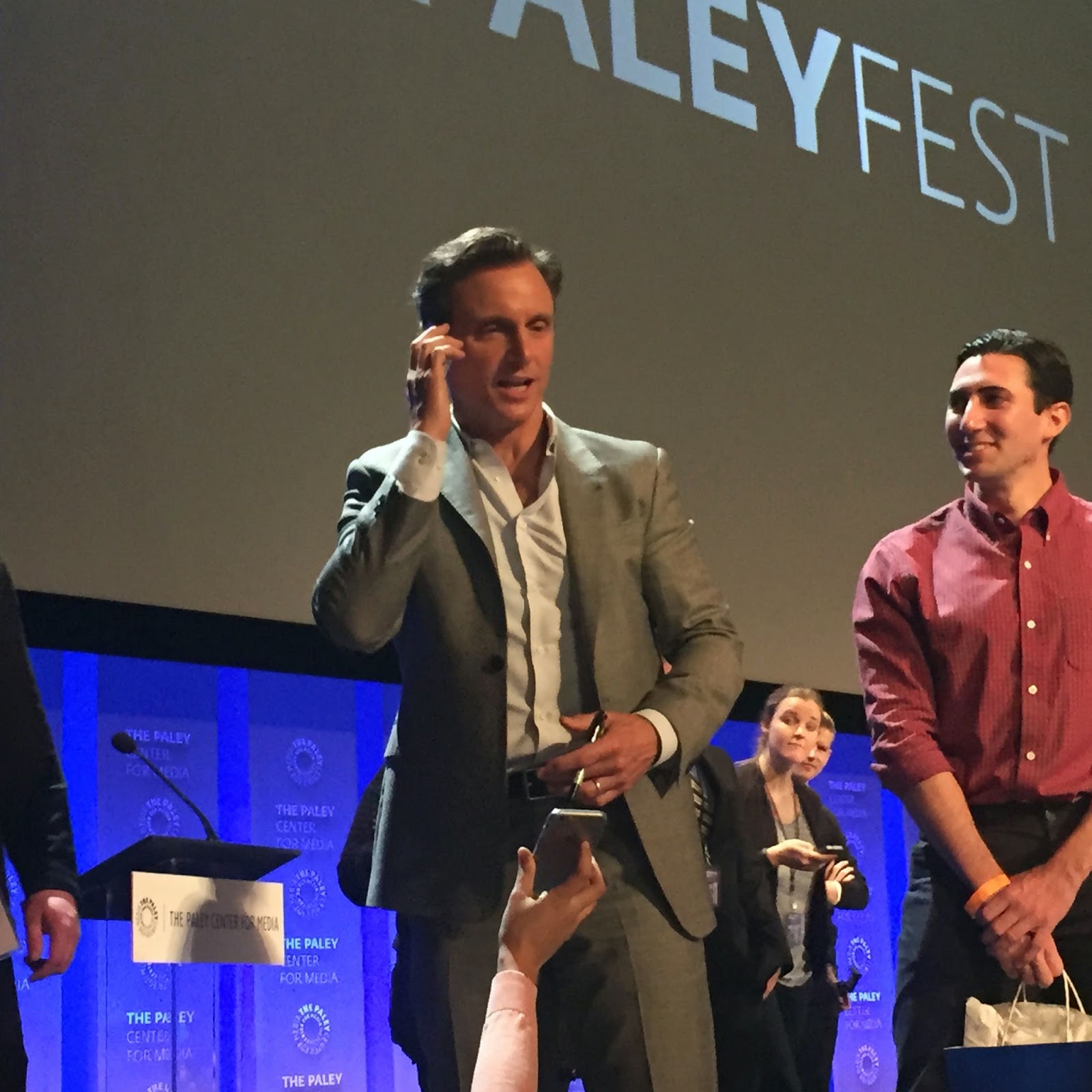 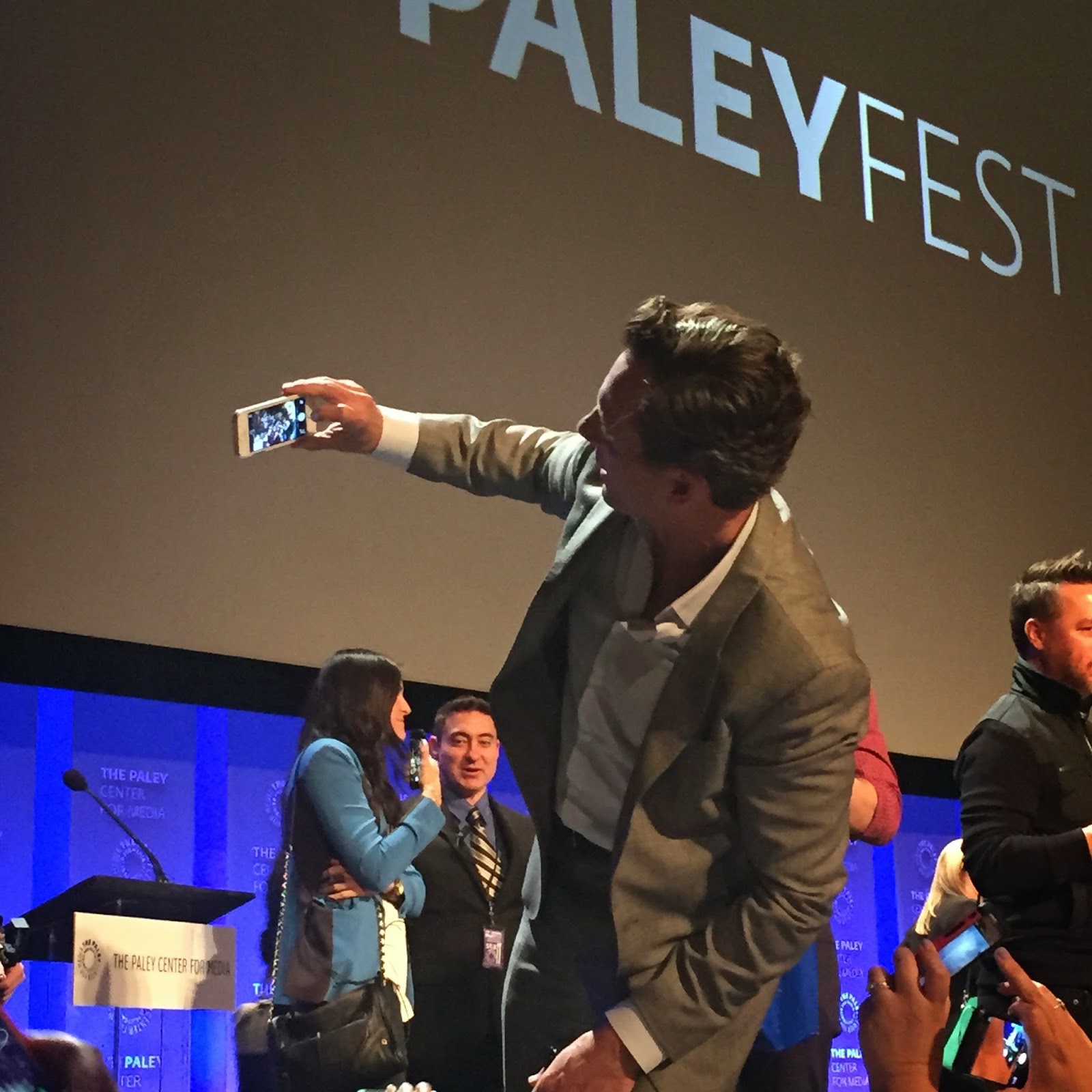 after a few more fan selfies, he flashed a grin and a wave, and then he was gone. 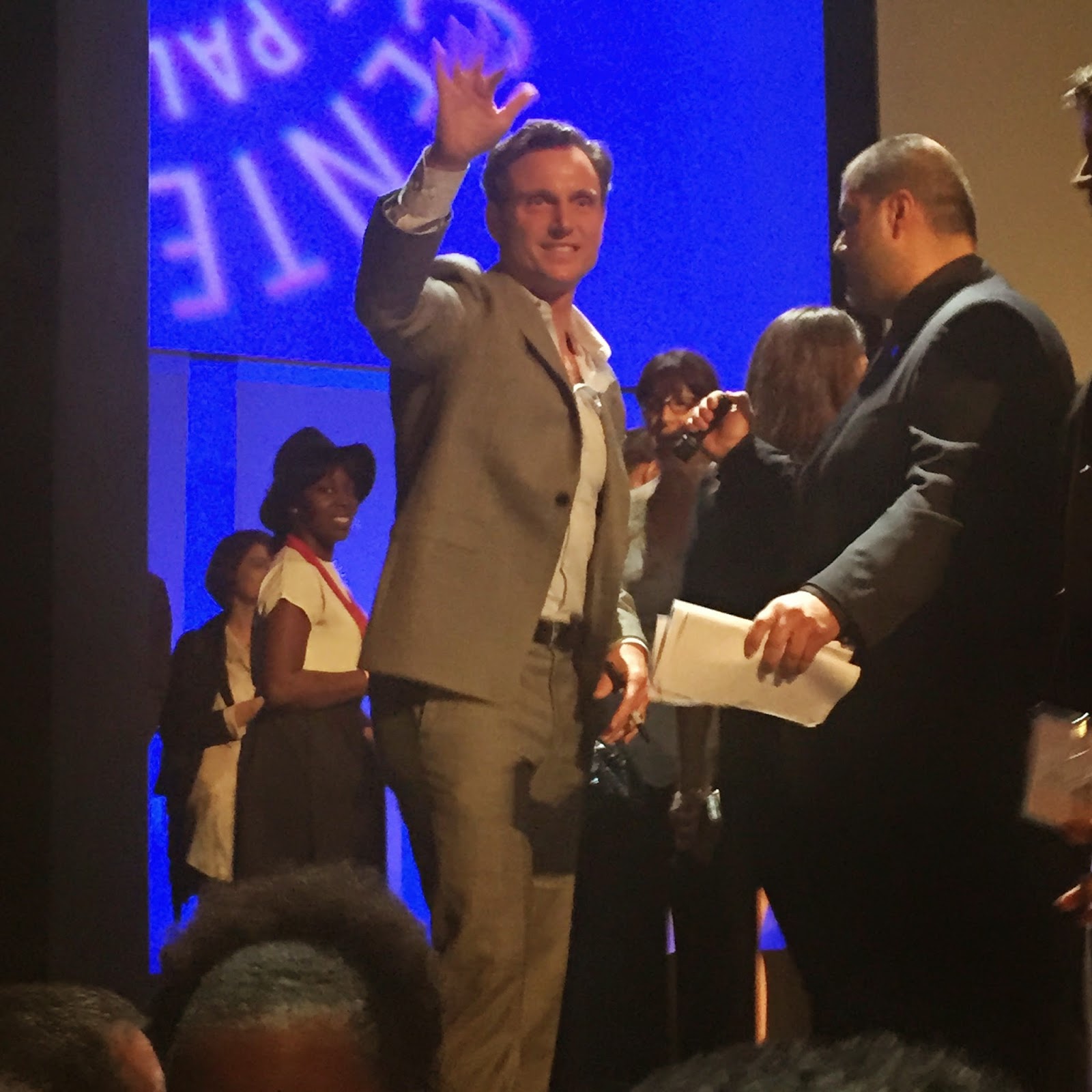 josh malina, who plays "david rosen," was nearby.  the cast was full of stories about his pranks and jokes, and he seems like a fun guy to be around. 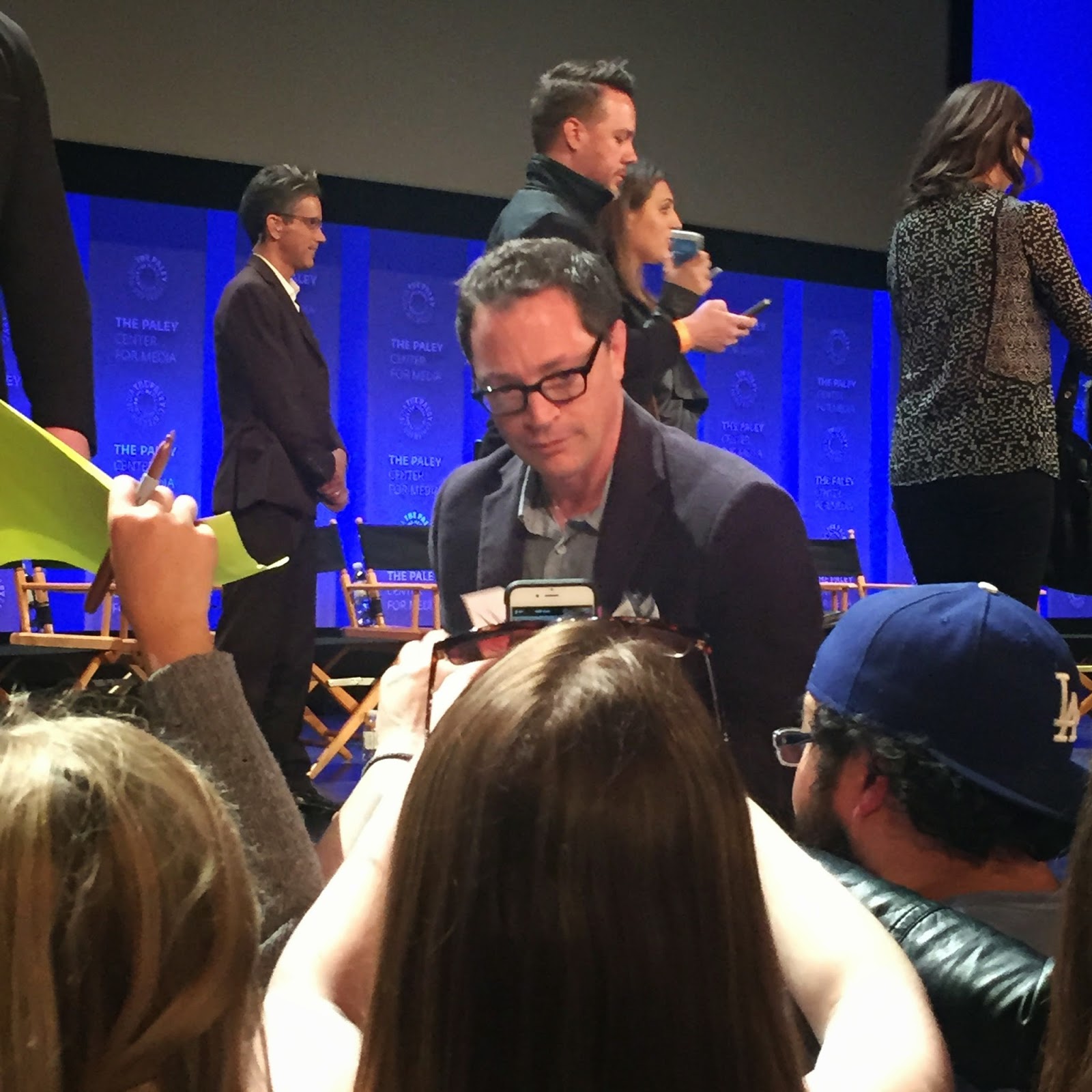 katie lowes ("quinn perkins") is adorable.  i could totally be BFFs with her. 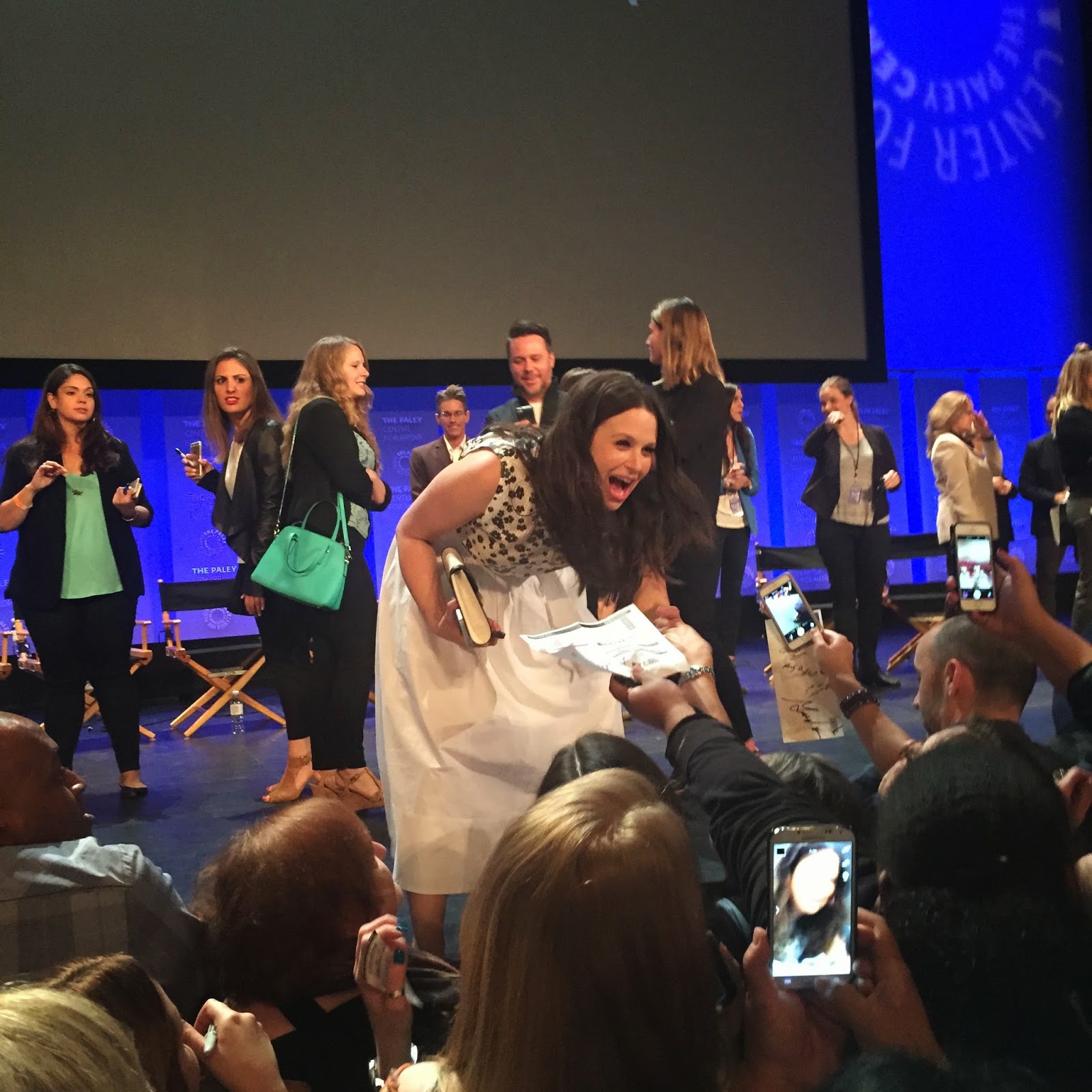 guillermo diaz, the other half of "huckleberry quinn," looked like he was having a blast. 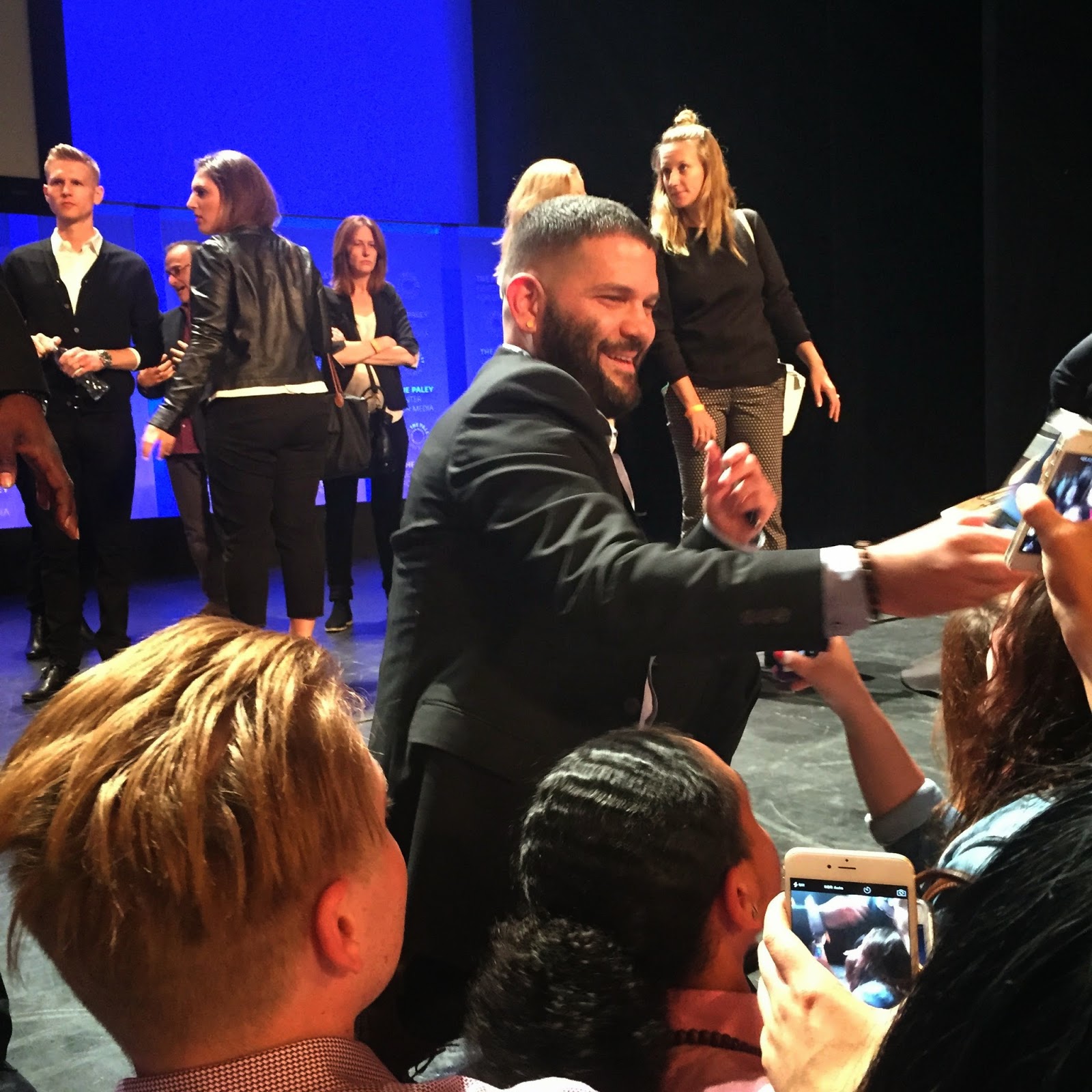 this guy was pretty excited too, apparently. 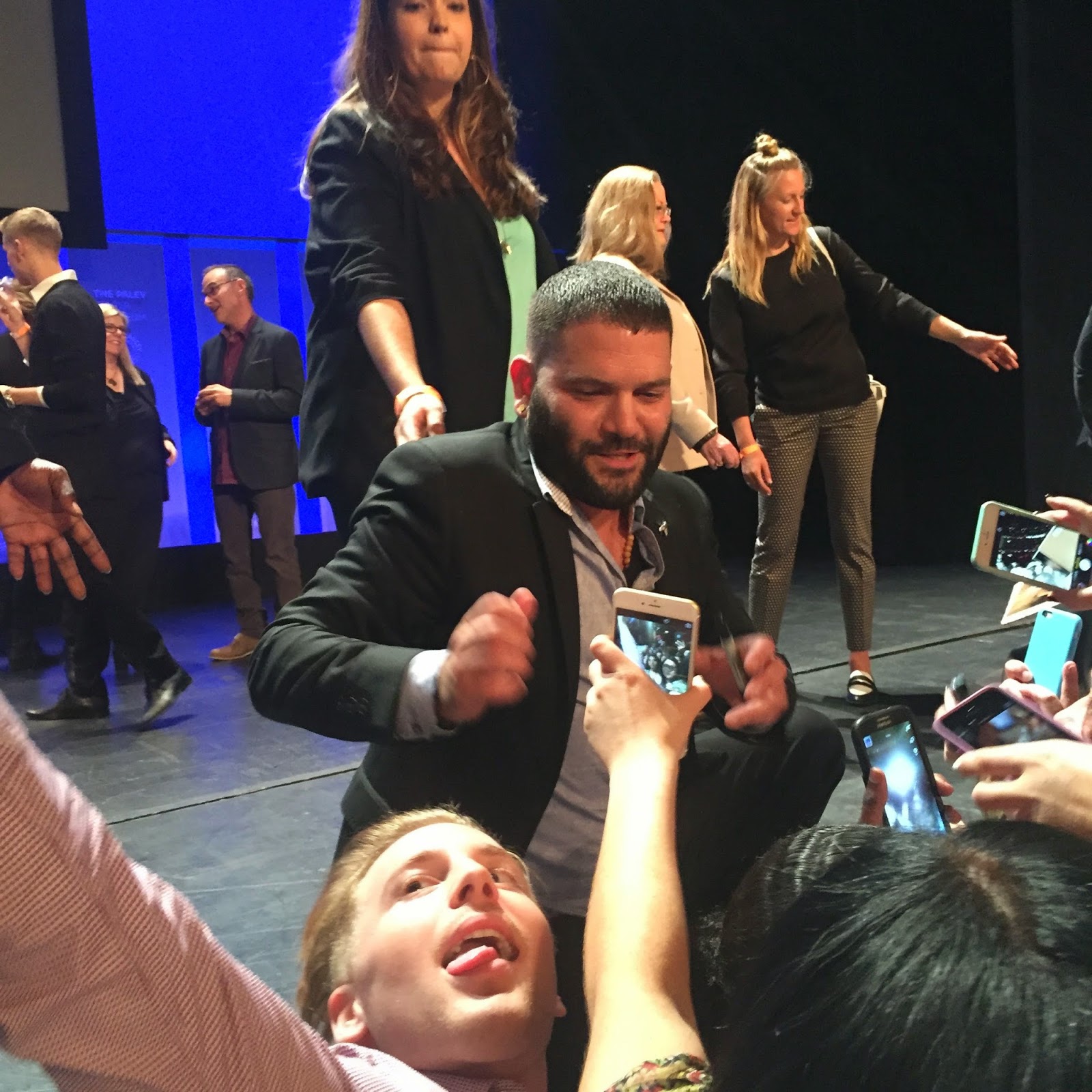 ah, scott foley.  he is just so nice to look at. 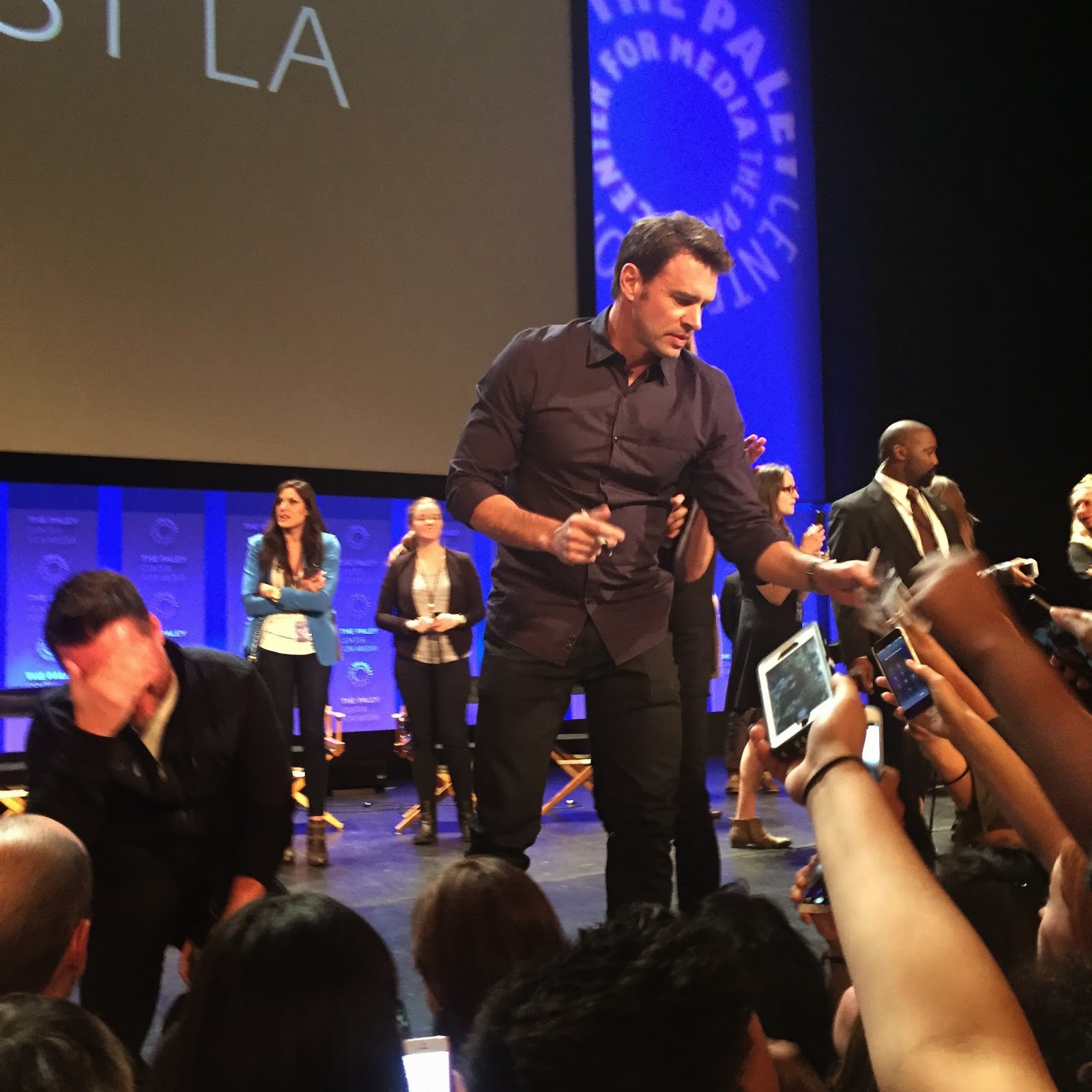 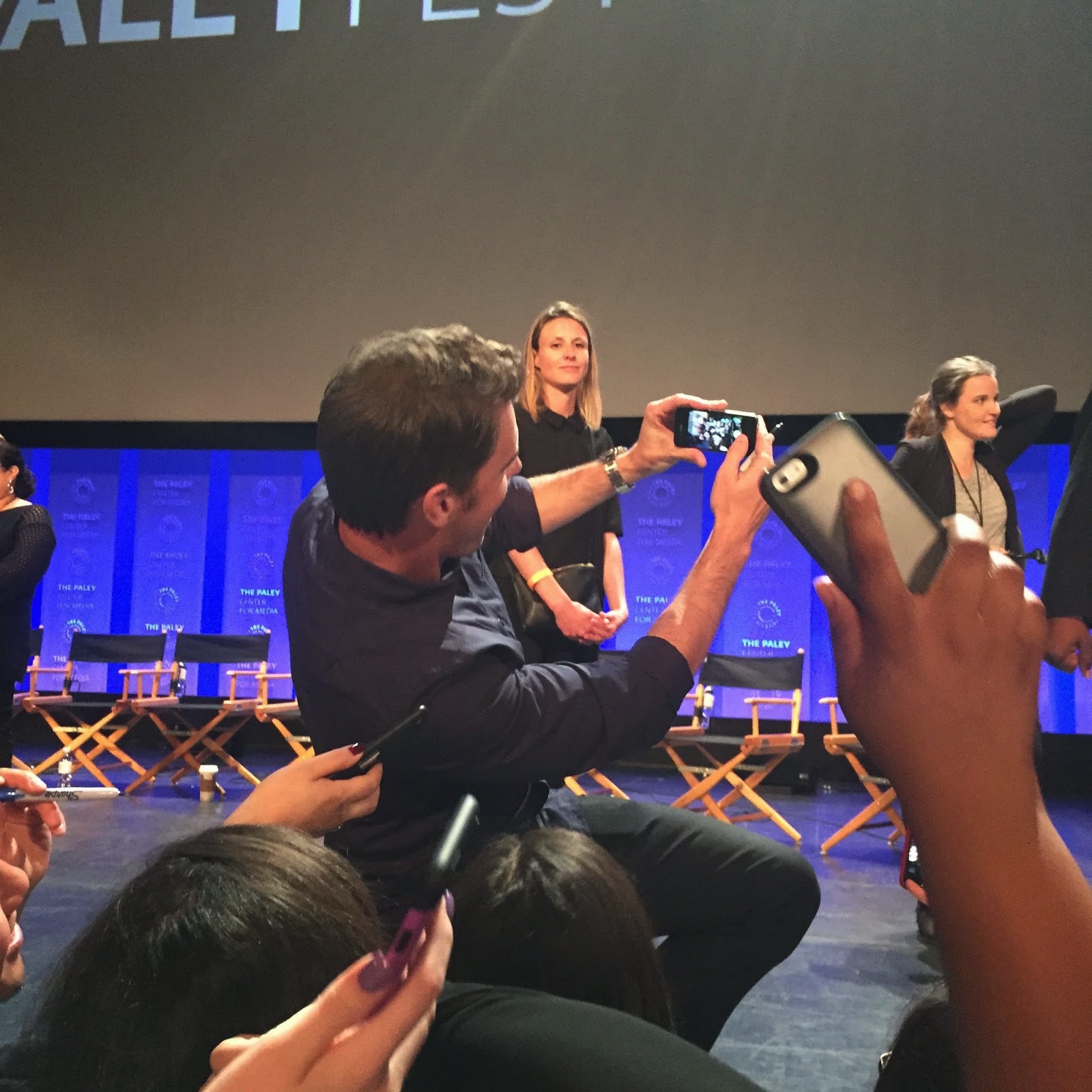 while we were fangirling like mad, i'd asked aline to make sure she texted one of the girls to find out where they were, and to let them know what we were up to.  she told me "they're at the candy shop!" and i said "well yeah, SO ARE WE."  muahahahahahaha.

when we'd finally had our fill (aka the entire cast had all made their way to the exit), we headed out to find the girls hanging out, likely cursing us as we were on our quest to meet some celebrities.  there was a whole lot of excited chatter and we shared our pictures with them as we headed off to starbucks for something to drink before heading home.

that was one super fun evening.  we'd been told that this was the first time that scandal had made an appearance at paleyfest, which was kind of cool.  it seemed like it went really well for all parties involved, and i hope they come back next year.  we'll be first in line for tickets the second they make that announcement.
at March 13, 2015