to commemorate the 30th running of the l.a. marathon this past weekend, asics announced that they were going to place spotlights at each mile of the course. starting at dodger stadium and ending in santa monica, the lights would be turned on friday night for about an hour and a half. sounds cool as hell, right? yup.

well, i certainly thought so. despite my firm "no way in hell" stance on running a full marathon myself, i really wanted to check out what promised to be a pretty awesome sight. so i talked the hub into making the drive out to griffith observatory that evening so we could take in the view from a high vantage point. we packed the girls into the prI-YES and headed off to see what there was to see.

of course, as we made our way towards the observatory, we found ourselves joining quite a long line of other lookyloos. i should've known. 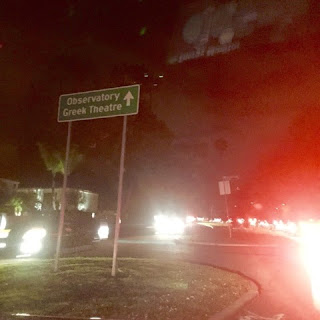 as we made our way up the hill, the lights were visible beyond the trees. i couldn't get a clear shot of them, but i was pretty excited to get to the top before they were shut off. 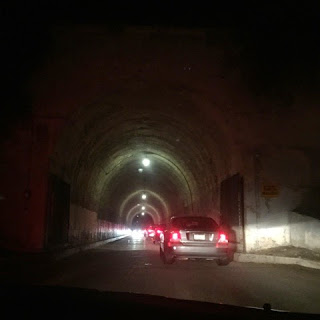 it'd been a long time since we'd been up here, although the bean recognized it from a field trip she went on last summer. 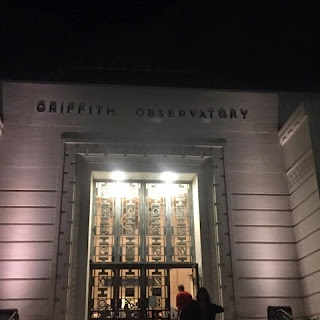 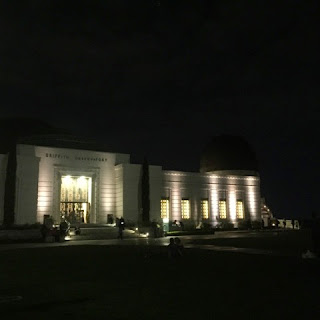 we joined the cluster of folks trying to get to the rear balcony of the observatory, and wouldn't you know it...the lights were off by the time we got there. dammit. it was still a beautiful evening, though, clear and warm. 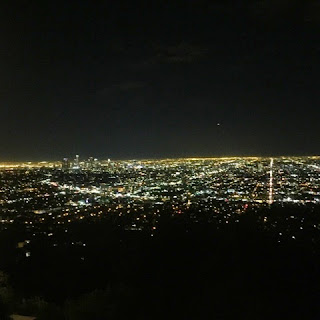 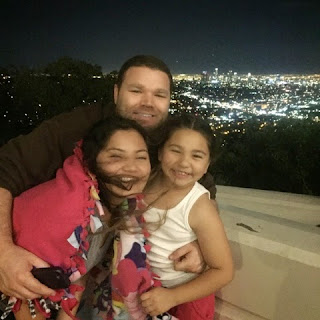 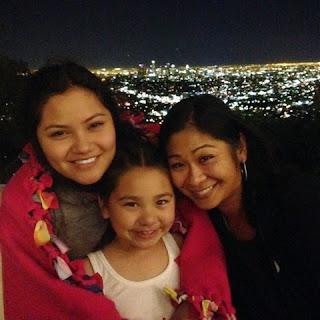 it was late anyhow, and the staffers announced that the park had closed for the night. predictably, as we got back to the parking lot, the spotlights came back on. the course was once again illuminated at each mile marker for all 26 miles, and while i still couldn't get a great picture, i managed at least one somewhat decent shot. 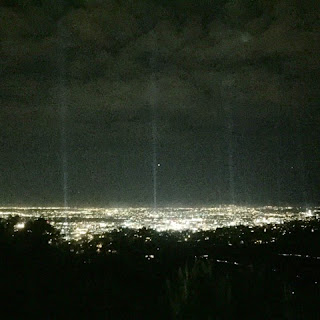 you can kind of see where the lights were beaming up into the clouds, right? 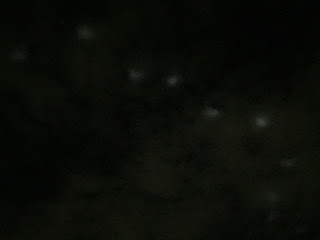 because i've made a good number of friends in the local running community, my facebook timeline and twitter feed were both chock full of posts and photographs of the marathon. they were all having a blast, and rather than shaking a fist and cursing the record breaking high temperatures, they were making the most of it and kicking all sorts of ass. it was really exciting and inspiring, and i'm so proud of all my friends who crossed the finish line. later, i saw someone post that next year's marathon was pushed up to february 14th - yup, valentine's day.  i'm sure that was done in the hopes that the weather would be much more cooperative for the thousands of runners out on the course.

can i tell you a secret? all those pictures and stories and excitement has kinda got me thinking that maybe...just maybe...i might want to tackle it in 2016.

ack!! i know, i KNOW. i've always said this was something I would NEVER do. and it still sounds crazy - plus, the training runs would probably kill me. well, not literally. but man...it would be all kinds of awesome to conquer the one race distance that's always been so intimidating to me. not to mention, the course just sounds amazing.

registration opens in september. i guess i've got time to either come to my senses or talk myself completely into it, eh?
at March 17, 2015