the more recipes i come across that are super delicious, the easier i'm finding it to eat "clean."  or, at least, "clean-ish."  and if a meal can be done in the crock pot, even better.  like this lemon garlic chicken we tried last week which i served with some sautéed asparagus and mushroom quinoa: 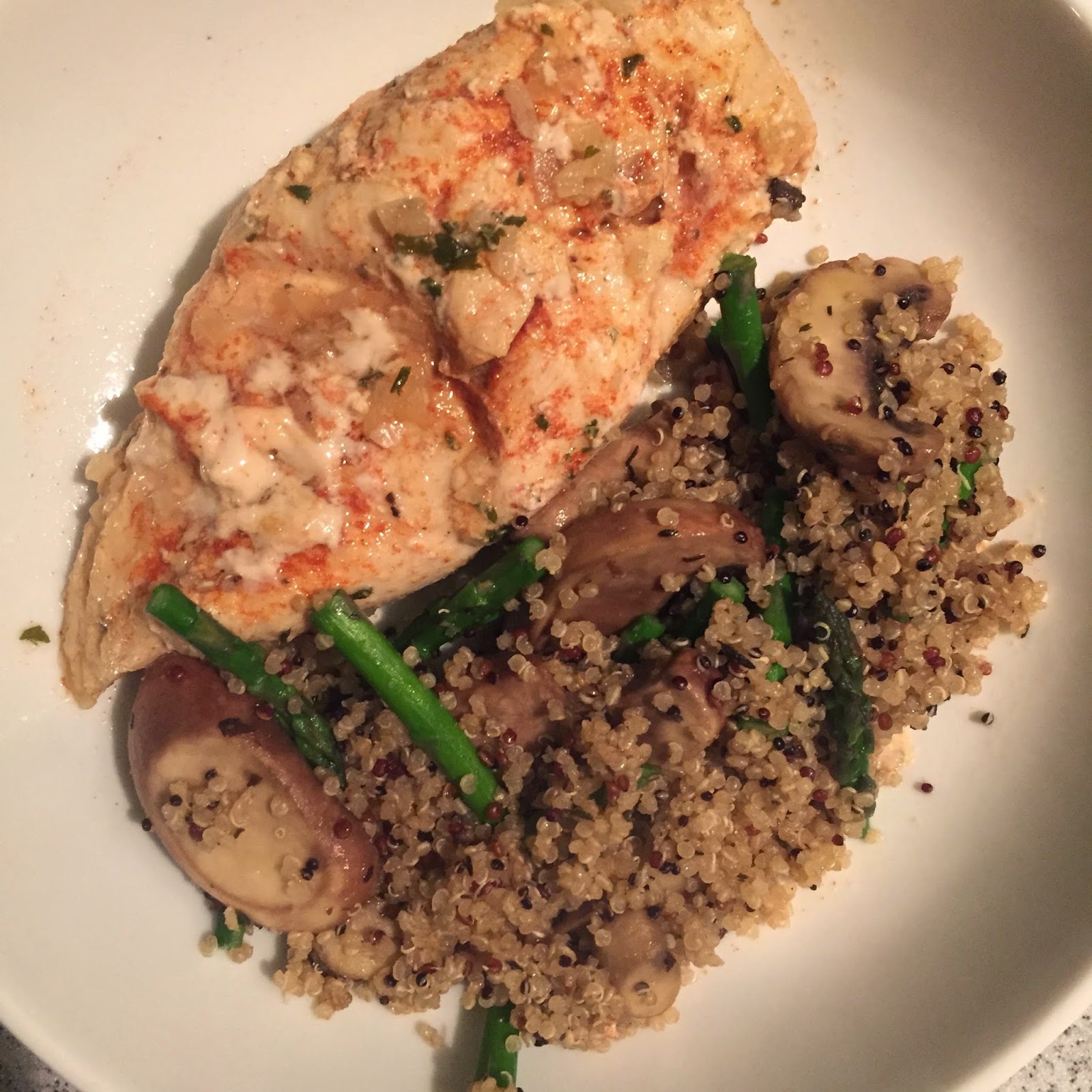 i know, i know - i said i didn't like quinoa before.  and i really didn't, that time.  but it actually turned out pretty delicious, and i was able to work through the texture issues i had the first time i tried the stuff.  i'm gonna say that adding two of my favorite veggies to it helped a lot.  in any case, it was a hit and it'll go into the rotation for future meals.

my next experiment found me breaking out the yeast again, for the first time in a long time. 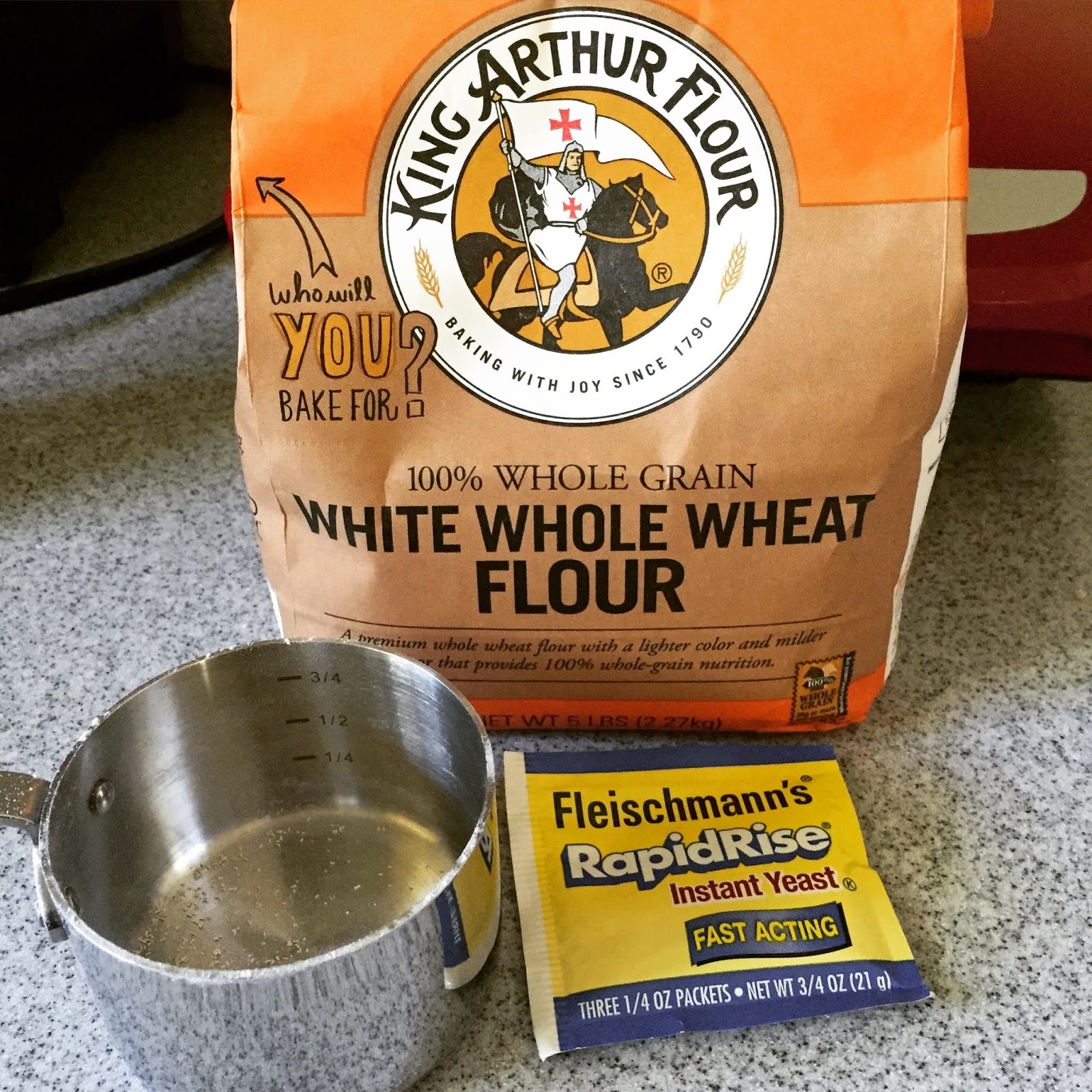 i followed this recipe for whole wheat pizza dough, and although i had my doubts as i mixed it up, it turned out pretty well.  i threw together the ingredients for a quick pizza sauce, and with the bean supervising, i got to work. 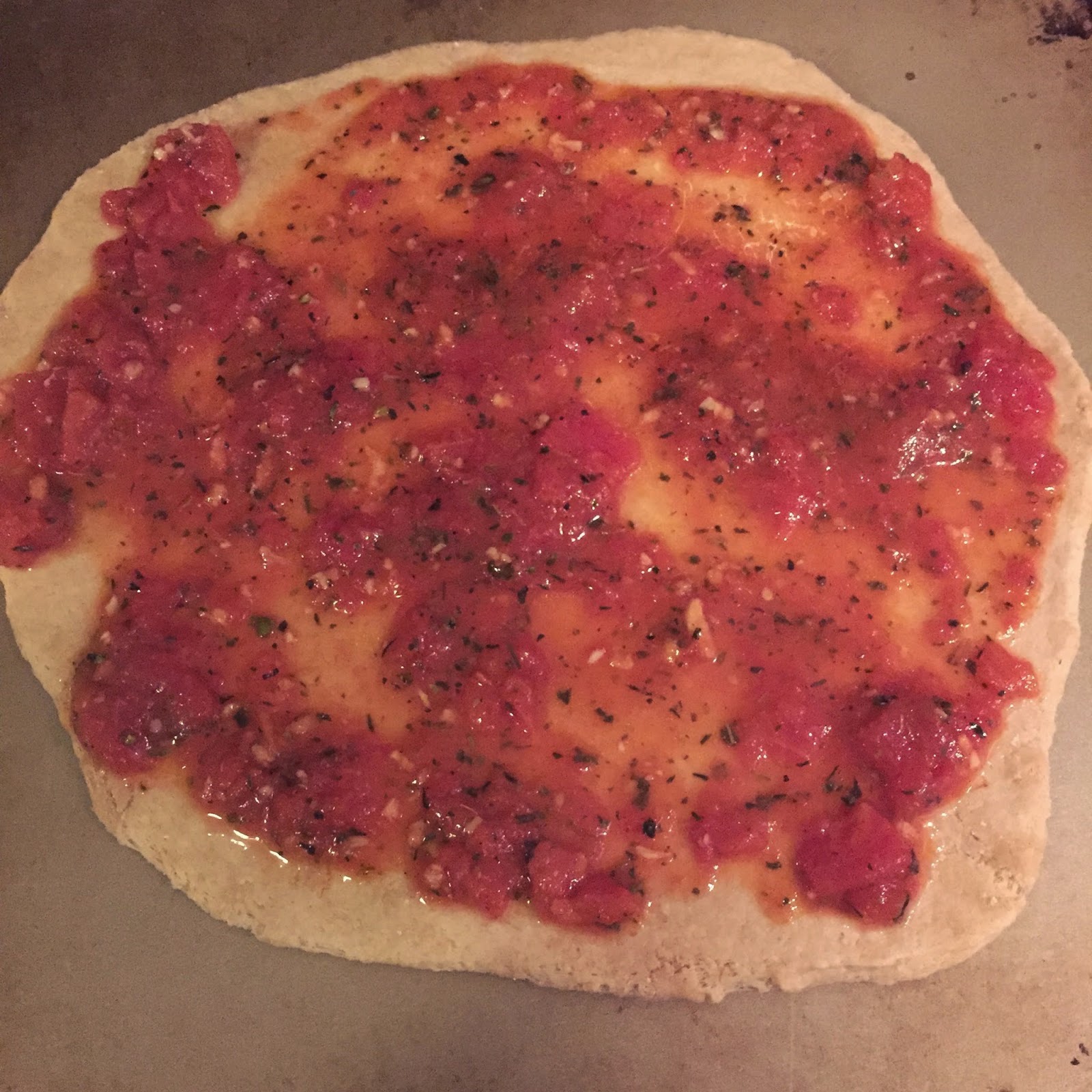 MIL and i shared this one, topped with uncured canadian bacon, mushrooms and asparagus.  the bean enjoyed her own pizza with slices of prosciutto on top.  i served it up with a warm brussels sprouts salad with uncured bacon, and everyone was happy. 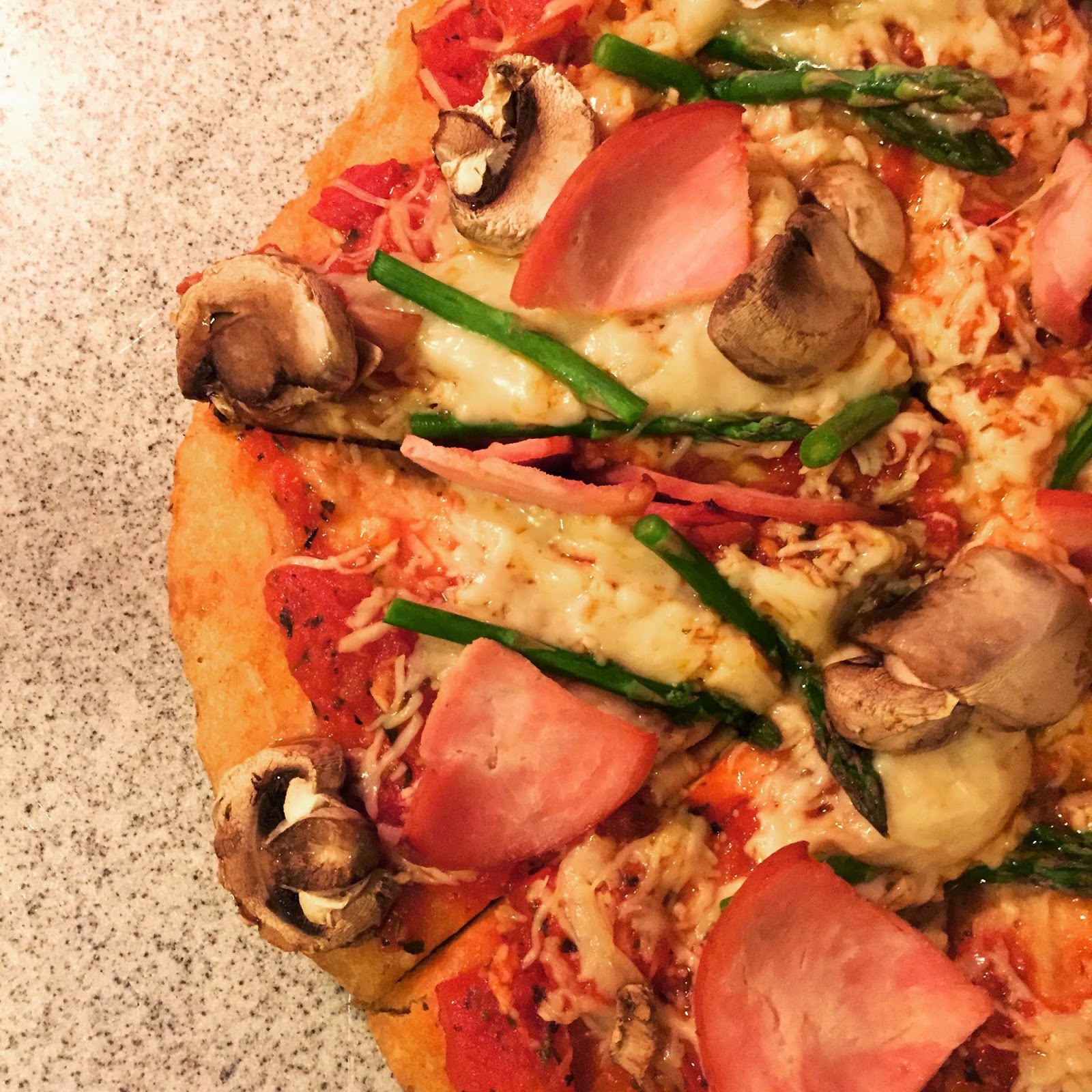 with a package of ground turkey just chilling in the fridge, i decided to tackle a recipe for mozzarella-stuffed meatballs.  these came together pretty easily, which was good considering i didn't even start cooking till our usual dinnertime. 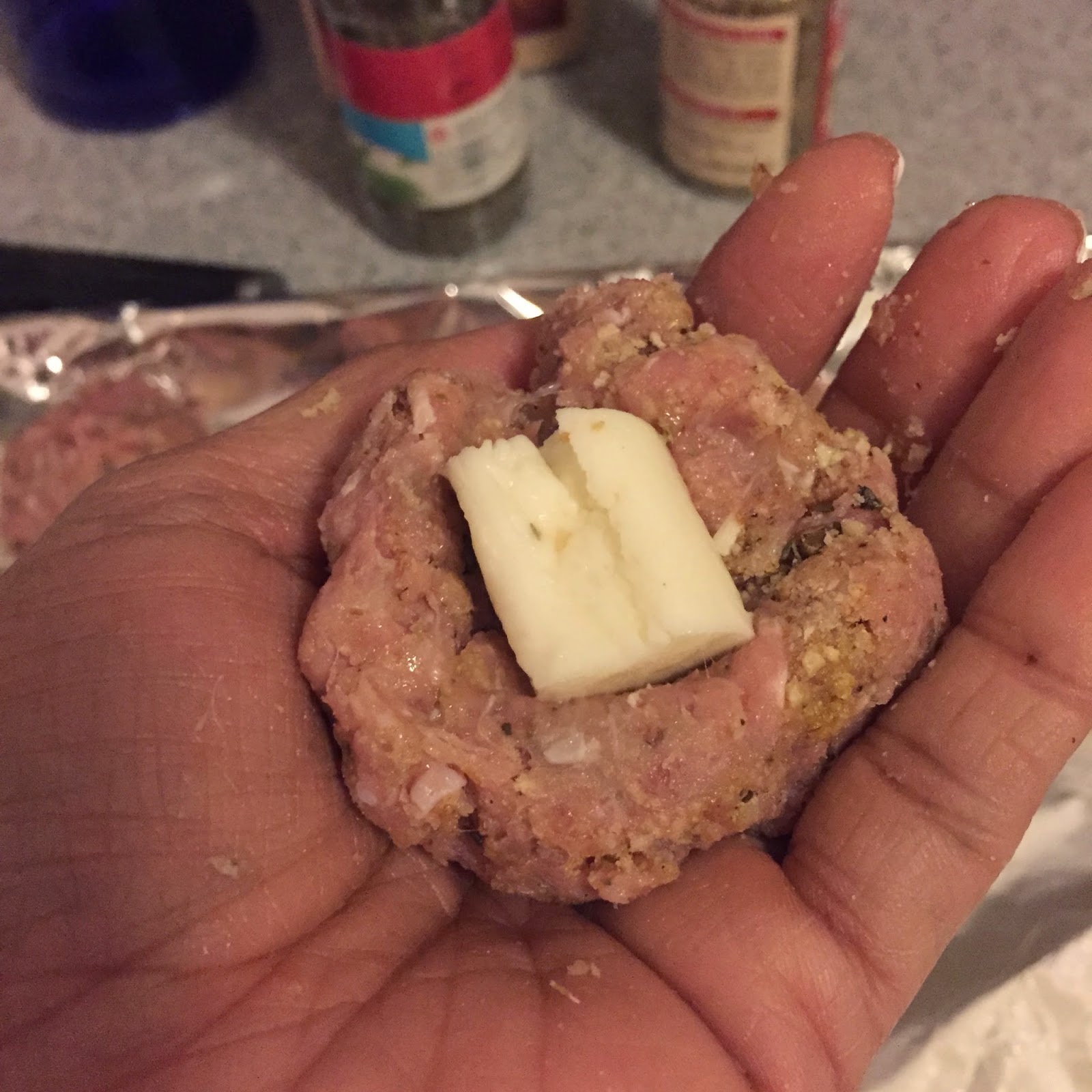 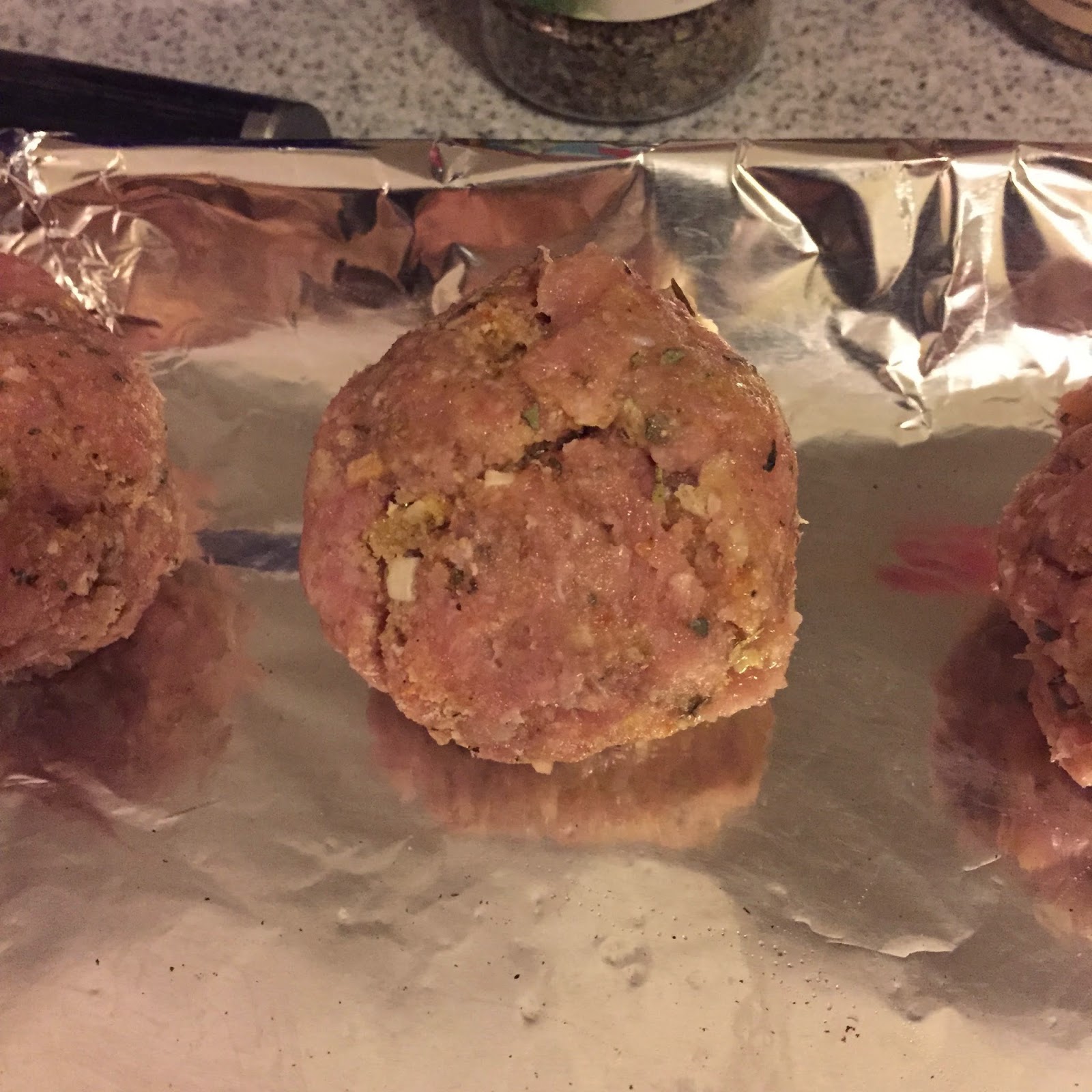 i made one change while following the recipe - instead of frying them in a pan, i baked them at 350 for about 25 minutes.  while they were baking, i boiled some water and cooked up a bag of brown rice fusilli and warmed up a jar of organic marinara sauce from trader joe's.  after assembling a bowl of warm, tomatoey goodness, i cut into the first meatball and it was absolutely perfect. 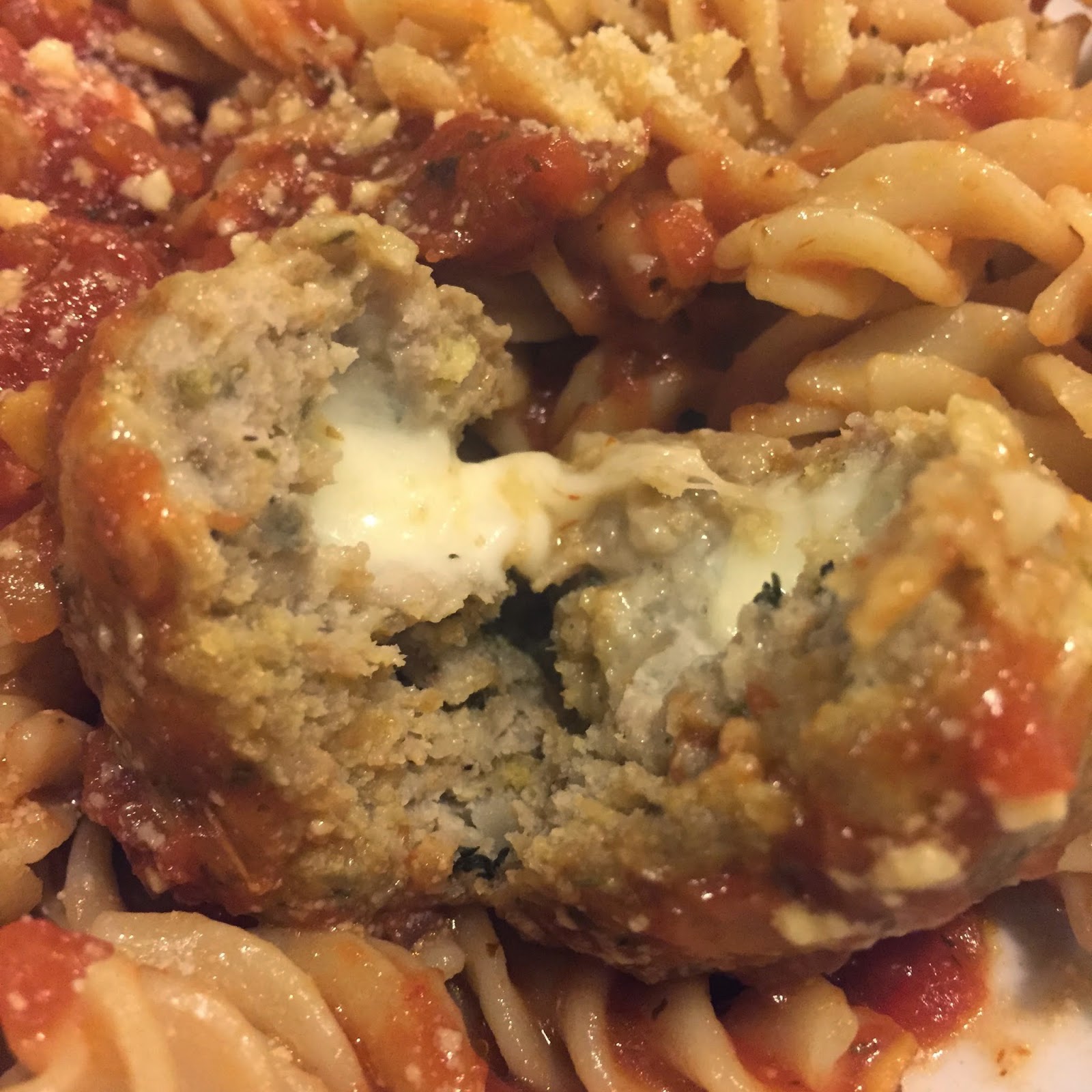 so you're well aware of how much we all love tater tot casserole around here.  except that the main ingredient - cream of mushroom soup - is definitely a big fat NO for this challenge.  i knew that others had done it with a homemade substitution, though, and so after finding an easy recipe, i decided to give it a shot.  as i made the cream, the teen worked on browning another package of ground turkey.  we mixed it all together, topped with some cheddar, peeled and shredded a russet potato for the top, and voila: 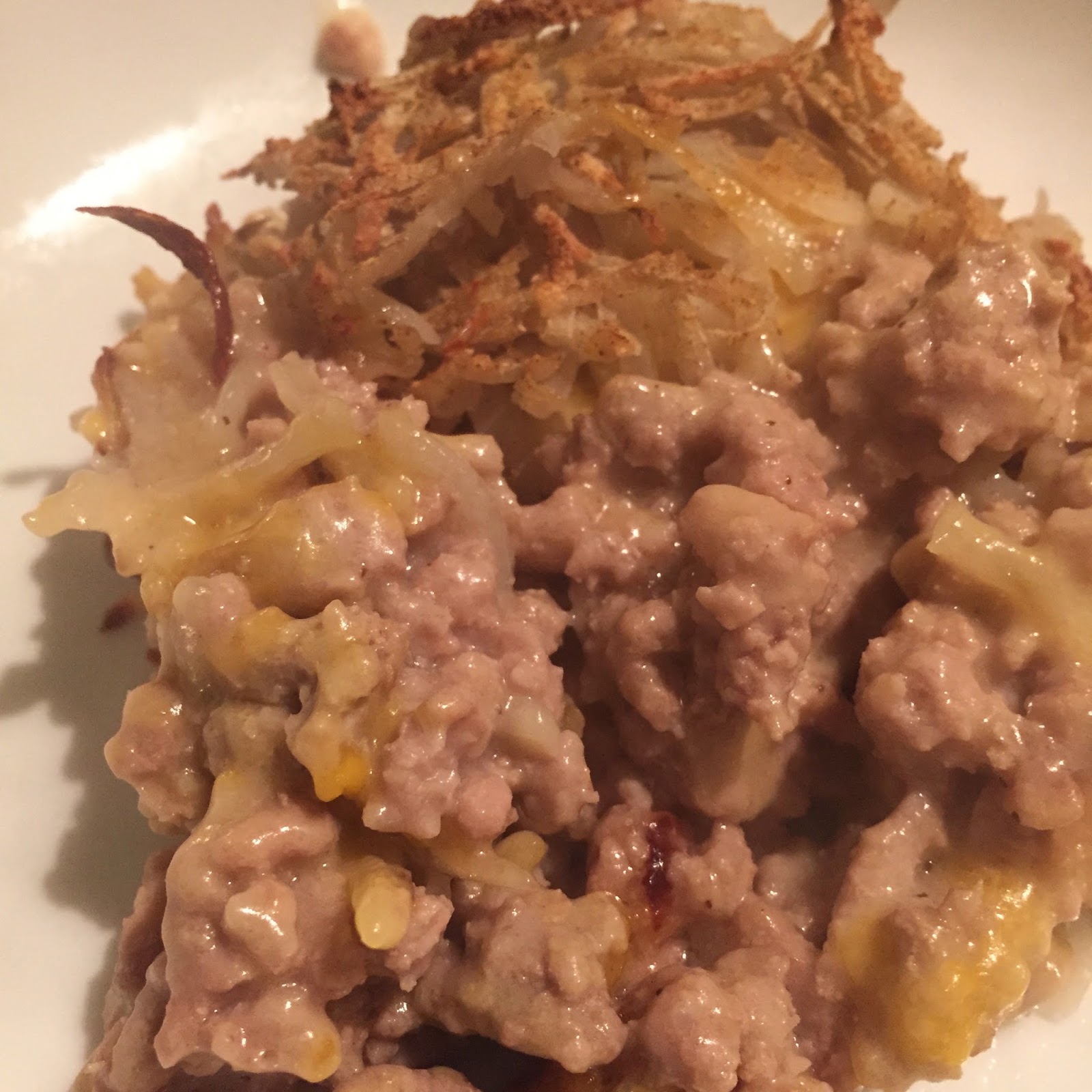 still looks like dog food no matter what you do with it, huh?  i don't care.  it was really good!  the bean loved it, and didn't even notice a difference.  while it's still not the healthiest thing in the world, it's not loaded with processed crap and frozen potatoes.  i'm gonna call this one a win.

now, i wouldn't be me if i didn't try a new recipe for a treat.  and when someone posted this recipe for homemade nut butter cups (heh heh, nut butter.  never stops being amusing), i knew i had to try it.  reese's are the teen's most favorite thing in the world, and i wanted to surprise her with something i made with her in mind.

it was pretty easy to make, and i used a mix of cashews and peanuts for the butter.  i'm really starting to like making this stuff, and that cashew butter i made last week is all but gone.  mixed with some raw honey, coconut oil and vanilla extract, it went into a mini muffin tin and then to the freezer to solidify. i wanted the cups to have chocolate on both the bottom and tops, so after about an hour or so, i popped them out to do just that. 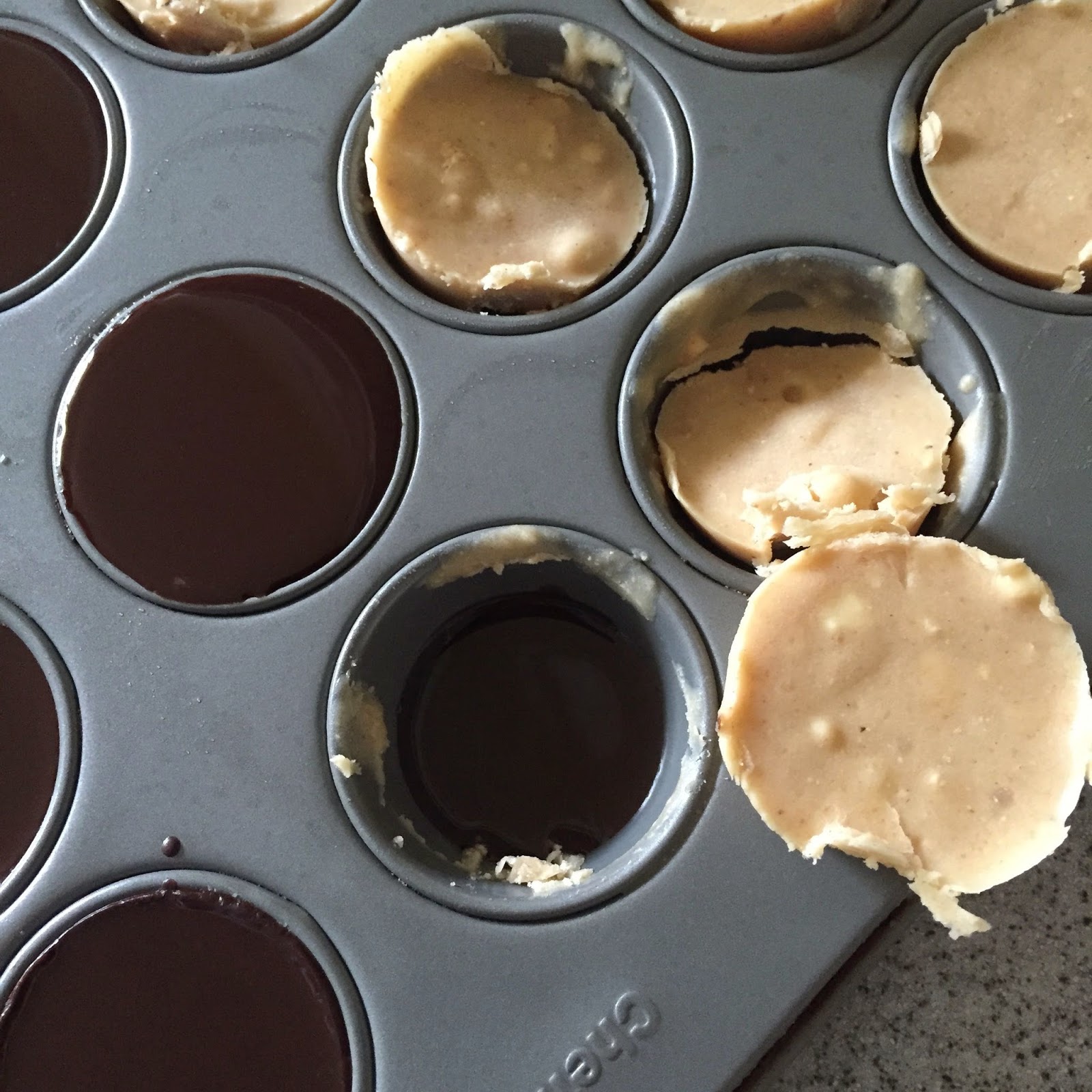 this was kind of a bitch.  next time, i'm going to use mini paper liners and save the pan from getting even more scratched up.  but i didn't have any, and so i just worked on pouring some of the chocolate mixture into the bottoms of the cups, replacing the nutty layers, and topping them with more chocolate. 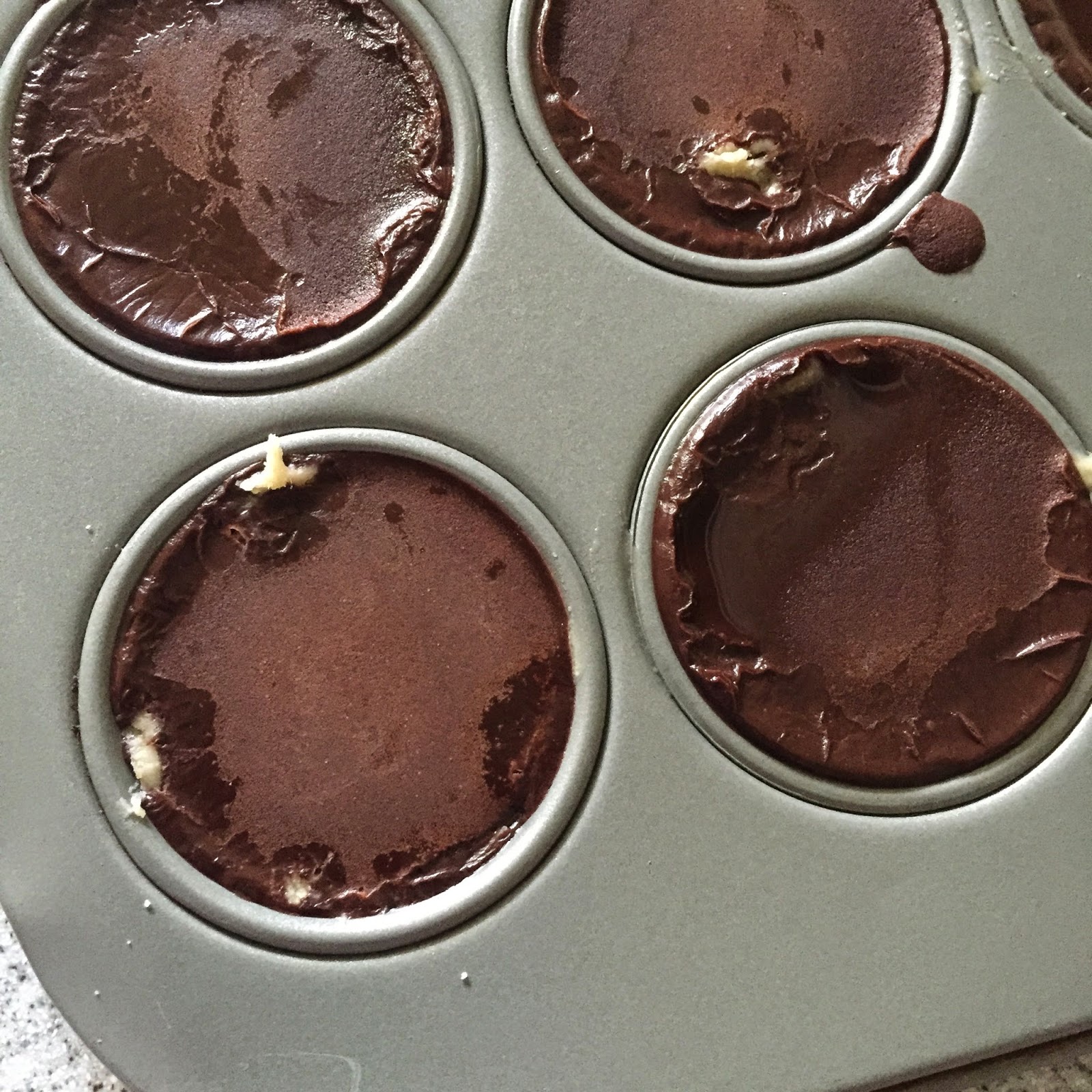 since i had to use a butter knife to pry them all out when they were done, they all have little dents on one edge.  so while they aren't exactly pretty, i can tell you that they sure are tasty. 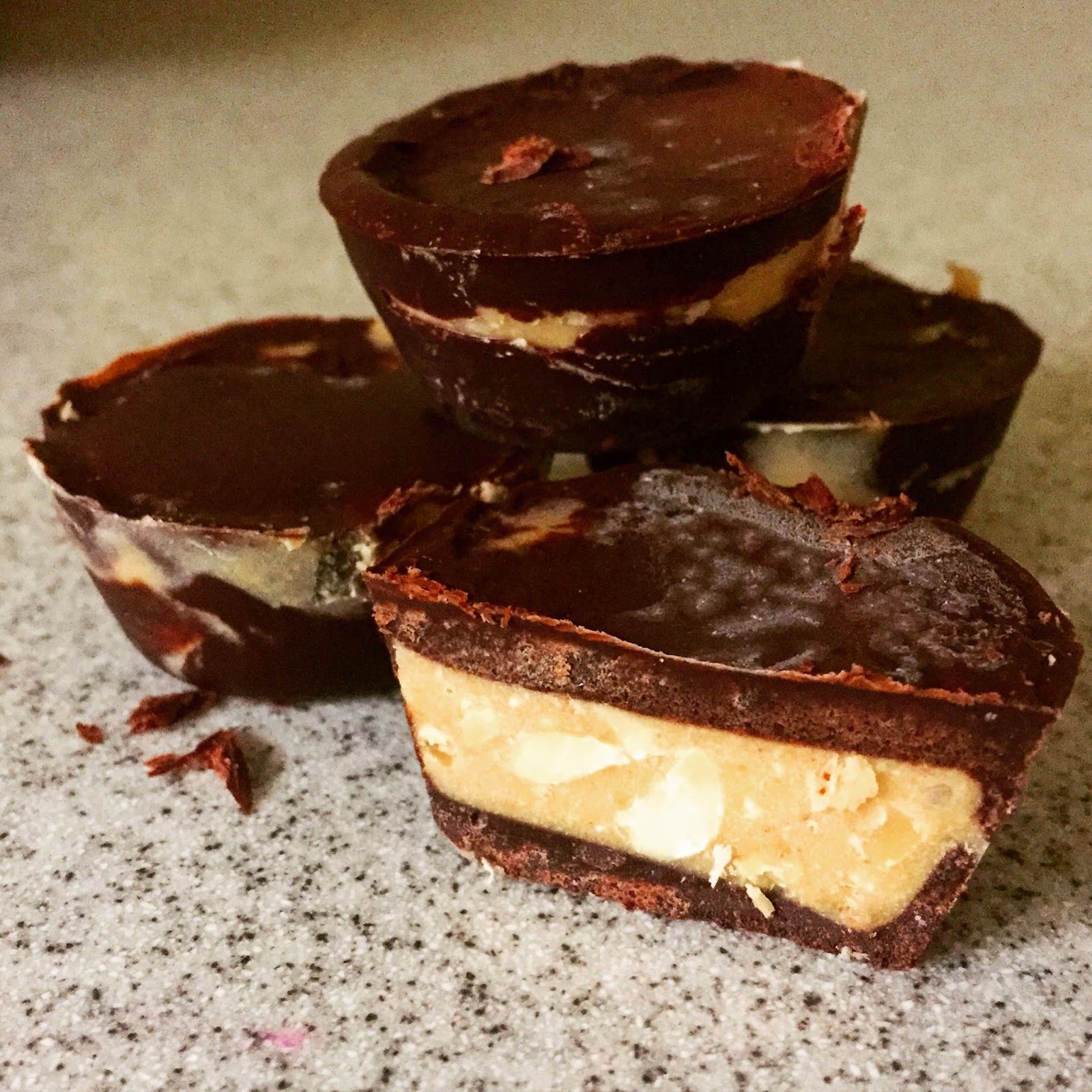 despite her disdain for the taste of coconut, the teen gave these two thumbs up.  i'm calling that a big win.
at March 02, 2015