i got me an instant pot!

so, yeah...i'm supposed to be in the throes of the xtend barre clean eating/fitness challenge.  i think we're in week 4, and while i'm managing to keep up with the fitness goal, i sure haven't done squat about the eating part.

well, okay, maybe a tiny bit.  sorta.  see, around christmastime my friend nanners posted an amazon deal for an instant pot.  it's a multi-use countertop cooking device that replaces a crock pot, pressure cooker, rice cooker, steamer, and a couple of other fun uses.  you can sauté, make soup, stews, all sorts of delicious stuff - all in one pot.

although with the craziness of holiday shopping, i totally forgot all about the deal and missed out on it.  oops.  but then the topic came up again when i started reading about how my friends were using it and loving it.  intrigued, i checked amazon and found that while the current deal wasn't as fantastic as it had been a couple of months ago, it was still pretty good.  so while i knew i was risking the wrath of the hub, who would be less than thrilled about the idea of another small kitchen appliance, i closed my eyes and hit the "order now" button.

with the magic of amazon prime, it came two days later. 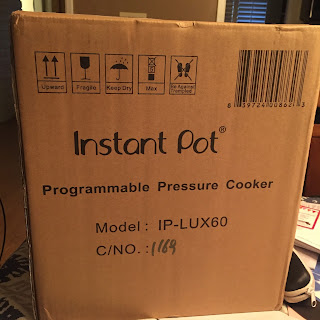 i looked closer at those warning labels on the box and found this one kind of amusing, if not confusing. 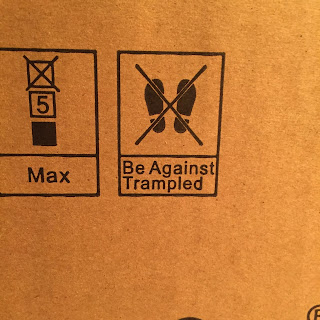 i opened the box and pulled out...another box. 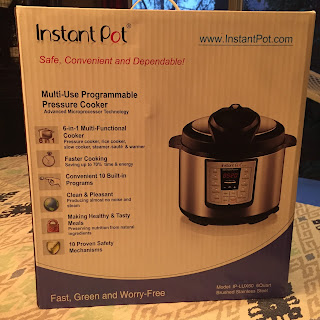 and then she sat on the floor for about another week until i finally decided it was time to give her a whirl.  ignoring the suggestions to do water tests and pressure tests and this test and that test, i decided to just go for it and bought a corned beef brisket to make for dinner.  the last few times i made that in the crock pot, the meat somehow came out tough and not delightful, so i really wanted to try the pressure cooking feature on it and see how it went.

i followed instructions i found online - placed the meat fat side up, poured in some water, closed the lid and set the timer to 90 minutes.  it sat like this for awhile as it built up to the appropriate level of pressure: 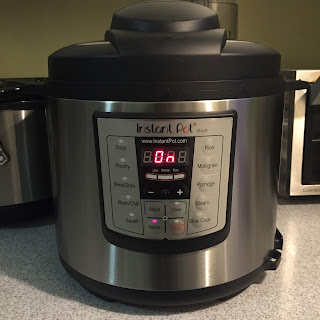 it took maybe 10 minutes for it to come up to pressure, and then i saw steam pouring out of the top for a minute or so before it stopped and the "on" switched over to the timer.  so the 90 minutes that i'd read about didn't start until after the cooker reached the right level of pressure.

when the meat was done, i pulled it out and placed the potatoes and cabbage inside.  ten minutes later, they were fully cooked and we were ready to eat: 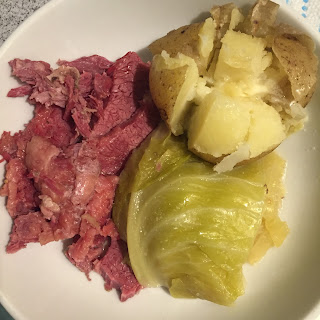 it wasn't pretty, but is corned beef & cabbage ever particularly attractive anyway?  and i was super stoked to find that the meat was cooked perfectly - tender, savory, so delicious.

bolstered by my initial success, i decided to tackle a recipe for hawaiian-style kalua pig the next day.  the process was super simple, although it took me a bit to cut the pork shoulder roast into pieces as directed.  since i didn't have the special hawaiian red sea salt, i subbed in regular old kosher salt and a dash of himalayan pink sea salt i found in my pantry.  and somehow, i had no bacon in the house - the horrors! - but i did have some pancetta, so i used that instead.  i got to use the sauté feature for it, which was fast and easy, and then the pork went in with about a cup of water.

just like for the corned beef, i took the meat out when it was done and cooked the cabbage for a few minutes.  the pork got shredded with two forks and then plated with some plain ol' white rice: 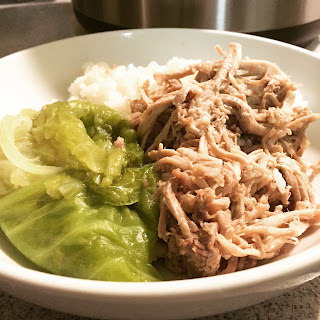 this stuff was delicious.  you wouldn't think it'd be anything special, since the ingredients are so simple.  but yeah...somehow, you put those things together and it's like hawaiian magic on a plate.  or in a bowl, as the case may be.

also, i'm kind of excited to have a regular rice cooker again.  i've been using the old stovetop method, which isn't terrible, but this way i can set it to cook and leave if i need to.  with the constant chauffeuring i do for the bean's various activities, this will make dinner much easier to manage without having to stand at the stove for long periods of time.

stuff like that counts for clean-ish eating, right? right??