i'm so gonna be the 4th dixie chick

so back in the day, when i was newly split from the old lady's dad and living out on my own, i was a huge country music fan.  of course, as is often the case with singletons (and moony-eyed teenagers, same thing right), this was influenced by a super cute guy i had a major crush on.  heh.

this was right around the same time that the dixie chicks were hitting their stride and becoming major players in the country music world.  i loved them, had their CDs playing on continuous loop in my car, what have you.  and later on, while the hub and i were dating, we got to see them live during their last three major tours.  they put on a really fun show, and i was a huge fan.

i was super excited when they announced that they were going out on tour again for the first time in, like, a decade.  as luck would have it, the show in the l.a. area is in october at one of my most favorite venues ever - the hollywood bowl.  i snagged two tickets and now i'm patiently waiting for october to get here (which it will, in no time at all).

of course, i follow the band and all 3 members on twitter.  natalie often posts funny tweets, and i've actually gotten replies from her a couple of times on comments i tweet to her.  it's always stupidly exciting when a celeb tweets you back...super lame, i know.  but still, i always think it's pretty awesome.  social media at its best, yeah?

one day while perusing my timeline, i saw this tweet from emily: 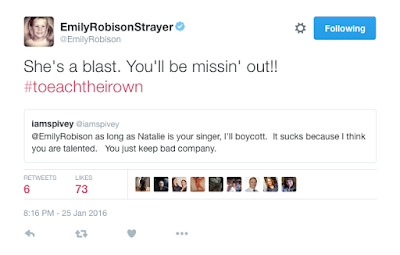 it's amazing how some people just can't let shit go, even a decade later.  i'm sure she was referring to the comment natalie made years ago while on tour, something about being ashamed that george bush was from texas (the band's home state).  you might remember the crazy backlash the band faced back then, with death threats and flag-waving former fans making bonfires with their CDs and all sorts of insanity.  anyway, i replied to emily's tweet with this: 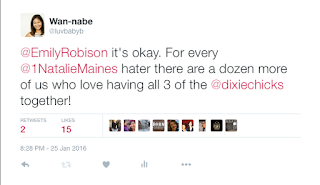 and then i got distracted with something shiny and turned off my phone for awhile.  when i went back and looked at my twitter feed again, i was super stoked to see this: 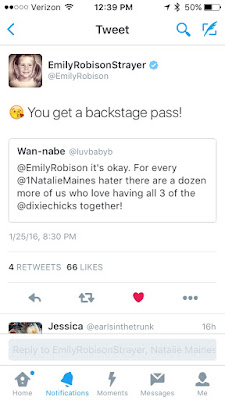 mind you, i was all atwitter (heheheh) just at the retweet.  i brushed off the comment, not really thinking much of it...until the next day, when i saw this:

a second later, i noticed that i had a direct message.  i clicked on it and... 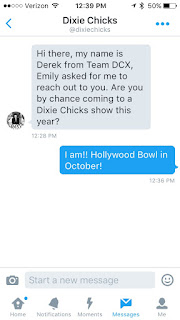 after trading a few more messages (plus a couple of emails), the end result is that when the hollywood bowl show gets a little closer their PR team is going to contact me to figure something out in the way of getting me backstage to meet the band.  !!!!!!!!!  they aren't technically planning any meet-and-greets during this tour, but apparently they're going to work something out for me.