the bean got to do something i always wanted to do back in the day - her cheer squad participated in their very first competition.  we had an early wake-up call, heading out to her coach's house to gather with the girls and get hair and make-up done.

you remember that this kid hates that stuff, right?  yeah. 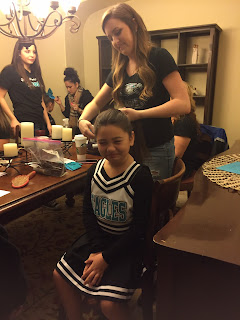 she cringed throughout the entire process of having her hair brushed up into a high ponytail, and then it just got better (or worse, depending on who you're talking to) - sparkly silver and teal eyeshadow, mascara and blush. 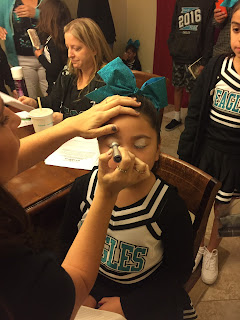 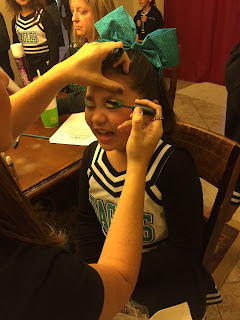 yes, she's 8.  i realize hair and makeup at that age is insane.  but you know how it goes - if you're going to be performing, you have to...otherwise the audience can't see your facial expressions from afar.  so she sucked it up and went with the flow. 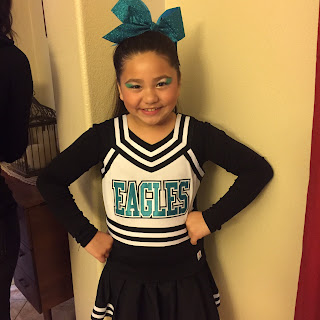 after a bazillion group photos... 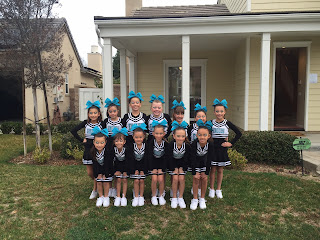 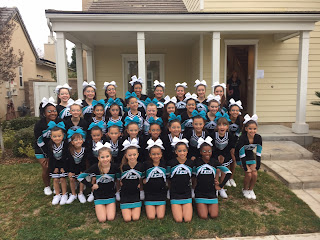 we headed out to san bernardino's indian springs high school, where lots and lots of cheer squads in all age ranges were getting ready to put on a show.  after sending her off with her squad and coaches, i got in the super long line for tickets.  at $12 a head, i'm thinking i want to start running cheer competitions.  heh. 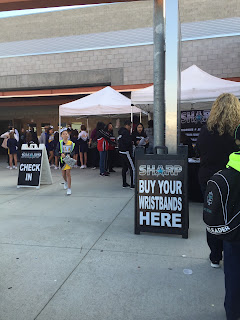 the hub and the old lady, who got to sleep in a bit, found me just outside the building with a venti iced caramel macchiato.  fabulous.  although because i couldn't take it inside, i had to show them from the door where i'd saved our seats.  as they made their way up the stands, i chugged that venti coffee faster than i've ever done before.  whoo boy, that was some fantastic caffeine right there.  just what i needed for the duration of that competition. 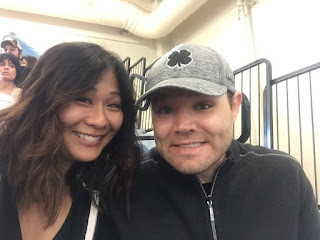 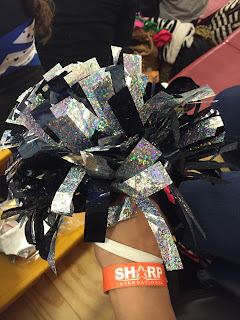 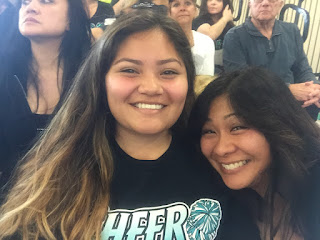 our girls hit the floor fairly early.  they were, like, the fourth or fifth squad to perform.  our little cheering section from our school went nuts when they ran out, and they looked excited and ready.  i knew the bean was nervous, and because i am me, my heart was pounding as i held my phone up to take video of their routine.  and okay, i admit it - they hadn't even started cheering yet and the tears were already rolling down my face.  whatever.  i'm a proud mom, alright?! 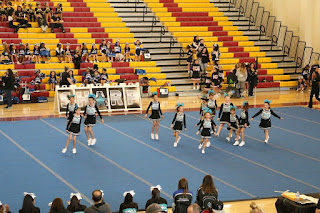 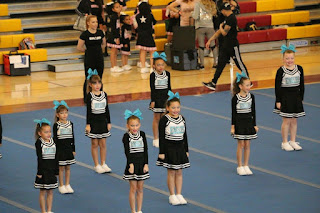 you guys...they NAILED it.  they were sharp, loud, on point, on beat...just freaking perfect. 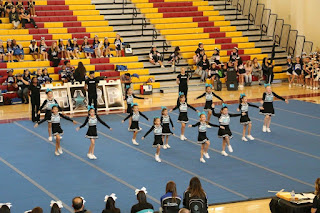 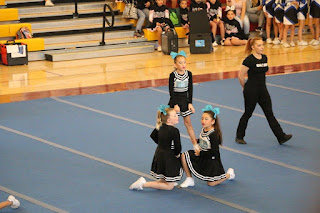 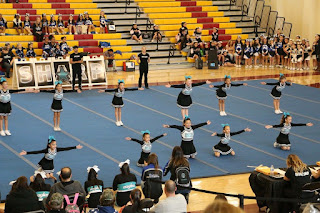 the hub, having lots of other things to do besides watch a bunch of little girls do cheer routines, bailed outta there almost as soon as they were done.  he knew we were there till the afternoon, waiting for varsity to perform and then for awards to be given, and i knew it was just too much for him.  luckily, he found the bean just outside before he left. 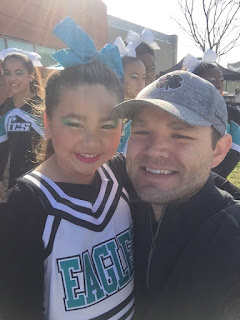 the girls got a bit of a break around mid-morning, and we all went out to hang out with them and have some lunch together.  and, of course, take a few pictures. 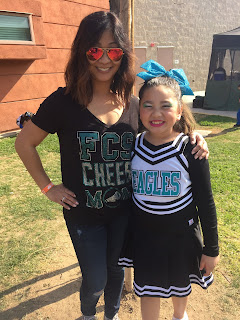 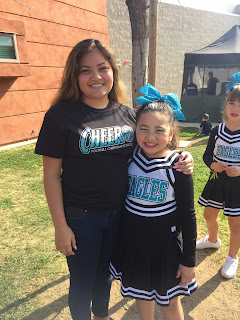 a quick lipstick touch-up and then we were separated again. 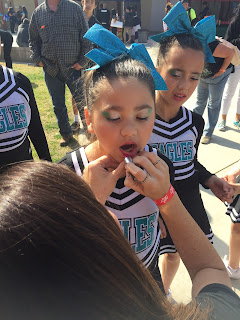 so did you know that at these competitions, they also do a spectator dance?  the squads all get extra points for everyone who participates in this thing.  so when the call went out, most of the moms and i trudged down the steps and headed outside to go and learn what our coach promised would be a "simple, 2 8-count routine."  yeah.

i'm really a terrible dancer.  i have no flair, my hips don't move like most people's do, i'm just bad.  the only thing i have going for me is that i can follow steps, learn a routine fairly easily and stay on beat.  so i look like a freaking dancing robot, basically.  whatever.  i figured i'd be buried amongst tons of other non-professional dancers and we'd be just fine.

so the dance part was...okay.  and then the cheerleader in me was a little excited to do a teeny-tiny thigh stand stunt at the end of the routine: 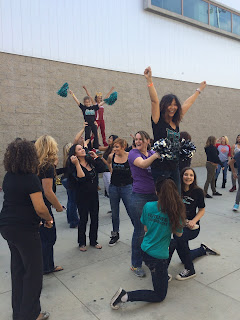 we went in there and did our thing...and happened to score a spot on the floor right in front of where our girls were sitting.  they cheered and screamed and laughed as they watched us, and i caught the bean's excited gaze as she realized what i was doing.  i admit it, it was fun and we all got a kick out of the girls' enthusiasm over seeing their parents out there. 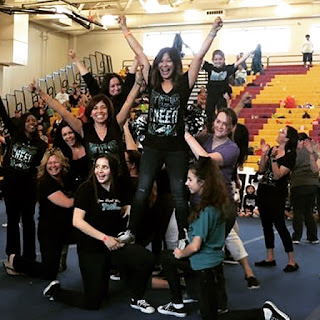 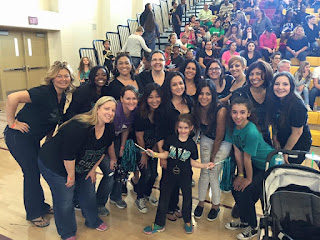 with that out of the way, we headed back up into the stands to wait for awards to be handed out.  and our cheering section sounded like it was twice its actual size when it was announced that not only had both squads taken first place in our divisions, but were named grand champions of the competition as well.

i was too busy screaming my head off and blinking back even more tears to take any pictures, although it wouldn't have mattered since we were sitting pretty far up anyway.  but you better believe i got shots afterwards, with trophies in hand. 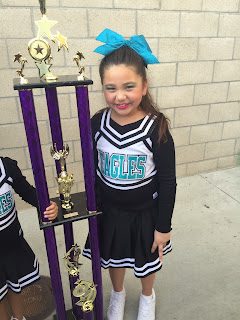 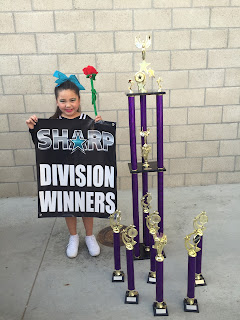 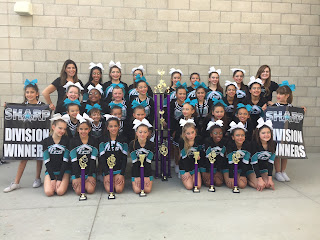 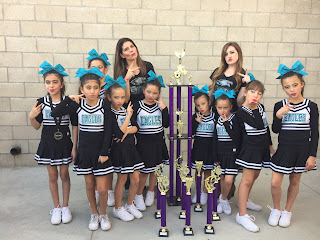 thanks to these coaches for whipping our girls into shape and getting them competition-ready in record time: 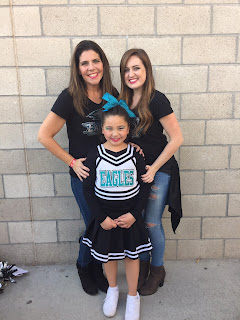 this week, they're cheering at the last couple of basketball games and then doing an end-of-the-season party early next week.  we were supposed to have one more competition this weekend, but for some unknown reason it was canceled.  maaaaaaybe someone finally realized that having scheduled it on super bowl sunday was probably not a great idea.  and sadly, the only other option was on saturday - which didn't work for the whole squad.  and without the whole squad, there's no more competitions.  boo.

but there's always next year.  and hey, they ended the year on a super high note.  can't complain about that!
at February 03, 2016

Email ThisBlogThis!Share to TwitterShare to FacebookShare to Pinterest
Labels: cheer, the bean's a winner