geez, i was a total blogslacker over the last few days, wasn't i?  and it wasn't even due to lack of stuff to post about...i've really just been that insanely busy.  but i'm back!  and i come bearing prizes for two winners from my mcdonald's taste crafted post!  first up: 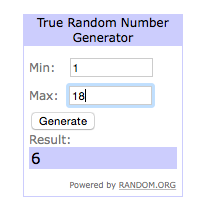 and the first winner is... 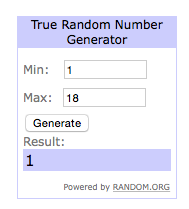 thanks for playing, everyone!  and you two winners, please email me with your contact information so that i can forward it on to my friends at mcdonald's.  congrats and enjoy the new menu!

in other news, do you remember last year when my co-leader and i auditioned for a game show?  well, i don't know what was wrong with those casting folks, because they didn't end up calling us back for that season.  but then while we were discussing cookies or meeting activities or some other kind of girl scout-related insanity, she told me that they called her again to see if we could go back for one more audition.  and because we're gluttons for punishment (not to mention still VERY willing to play for $20K), we said yes. 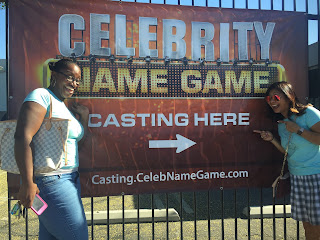 and this time, we dragged the old lady into the mix.  she was reluctant as she really hates any sort of attention, but i'm guessing she was curious enough about the process of trying out for a game show (and she had the morning off, so had nothing else to do). 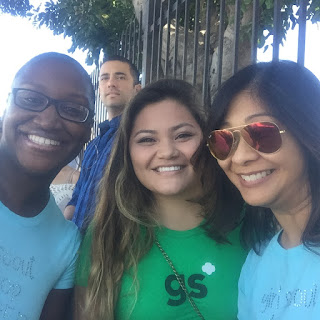 i crack up every time i look at that picture.  also, that photobomber claims to be a legit broadway actor.  although a number of folks in that audition room claimed to be an actor of some sort, so who knows.  anyway, after we checked in and had a head shot taken, we were led into the building. 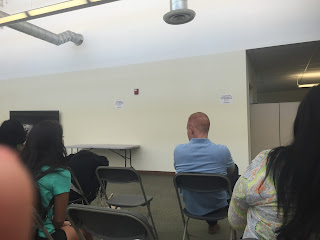 it was a much nicer venue than the last time we did this, and the process was mostly the same.  first, everyone saw a producer and did a quick 30-second intro.  i hate that stuff, because honestly, i don't have anything super exciting to say.  "hi, i'm a stay-at-home mom."  "i have two kids, a husband and a dog."  "i like to blog."  zzzzzzzzzzzzzzz.  but the co-leaders angle was interesting to the producers, because we managed to make it to the next round.  this consisted of playing a mock version of the game while showing an excessive amount of enthusiasm, not least of which involved a lot of jumping and cheering and spirit fingers and shit.  when you have two ex-cheerleaders, that's actually not very hard. 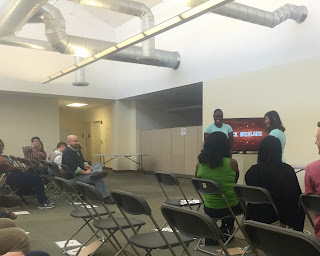 photo credit for that shot goes to the old lady, who opted out of moving forward because she couldn't bring herself to be that perky and cheerful.

we managed to make it to the next round, which brought us into a closed-off section of the room.  we could still hear what was going on, and were given a questionnaire to fill out.  i couldn't tell you what was on it, but i do remember listing mario lopez, ryan seacrest and neil patrick harris as my ideal celebrity teammates.  and when asked what i would do with my half of the prize, i wrote out "a bangin' red soled shoe wardrobe and a trip to hawaii."  what the hell is wrong with me?  i guess i don't do too well under pressure.

anyway, after we were done with that we were brought into a smaller room with a producer, a video camera, a laptop and a purple backdrop.  he had us introduce ourselves, play another round of the game, and then a quick interview.  we jumped around like crazy people, did a lot of arm flailing, grinned till our cheeks hurt, and basically made fools of ourselves trying to win over this producer who actually did seem like he was amused at our antics.  anyway, once we were done we were free to go, and with filming set to begin in march and running through the first part of may, now we get to play the waiting game.  not a game i enjoy, but it is what it is.

after doing a little juggling in regards to making sure our kids got picked up from school, we took advantage of where we were and stopped in at our favorite place - porto's.  we ordered pastries galore, and i threw in this horchata smoothie that was insanely delicious. 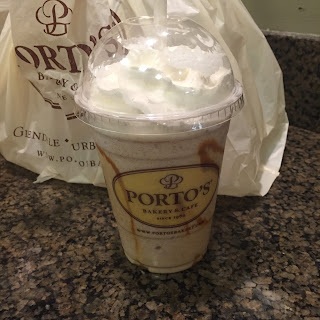 man, i hope we get called this time.  i just want to check "got to be a game show contestant" off of the ol' bucket list.  it's right up there with "meet ryan seacrest" and "visit tokyo disneyland."