while the bean isn't necessarily super passionate about cheerleading, she does have fun, loves hanging out with her friends and adores her coach.  sadly for us, said coach ended up leaving this year, taking a job coaching older girls at a local high school.  of course, two of her daughters are on that squad, so i totally get it.  but still...we miss her a lot.

so when she posted on facebook awhile ago that she was going to do a junior cheer clinic that would gather to learn a routine and then perform at their last football game at home, i talked the bean into signing up.  and then i promptly forgot about it and missed the deadline to register.  heh.  but because coach is such a good friend, she managed to pull some strings and get us in.  phew.

the classes lasted two hours and met just twice before the big game.  and then as luck would have it, the bean ended up going home early that day due to a headache and a really sore throat.  that kid doesn't get sick very often, so when she actually went to the office during recess and asked to call me, i knew it wasn't a good sign.  i rushed right over to the school, picked her up, brought her home and set her up on the couch with some motrin, plus soup and juice. 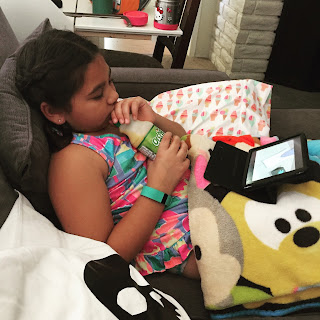 she rested for a few hours, relaxed and was feeling back to herself in no time.  she really wanted to go to the game and show off the routine she'd worked so hard to learn, and i couldn't blame her a bit.  and so we got her ready and headed out with the caveat that we could turn right back around and go back home if she started feeling icky again. 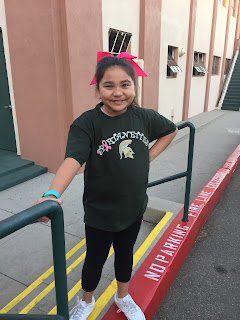 once we found our friends, she perked up considerably and i knew we were good to go. 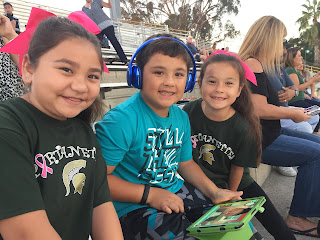 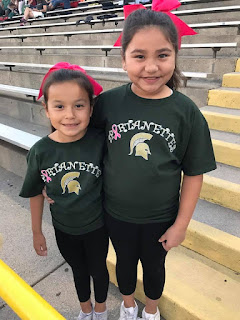 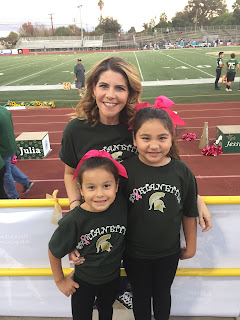 and then the girls joined the rest of the squad as they warmed up and got in a bit of last-minute practice while we sat back, chatted and watched the football team get their warmup in too.  i can't even tell you the last time i was at a high school football game...probably a good 25+ years ago. 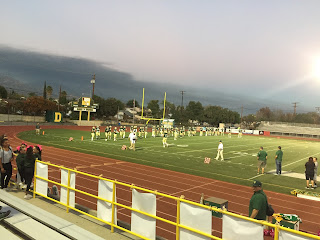 as the game began, the junior spirit squad got to head over and join the varsity girls as they did their thing in front of us. 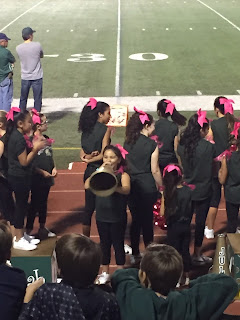 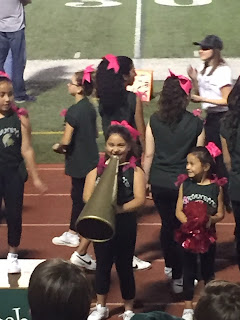 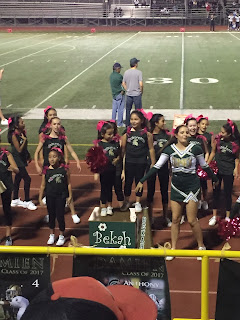 i got these from coach, who was stoked to have some of "her girls" come and cheer with her daughter. 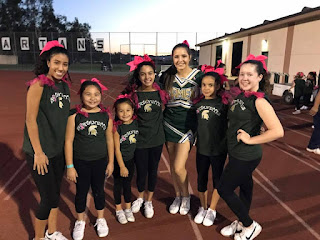 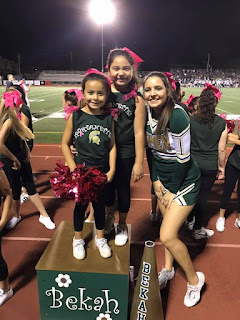 and when halftime finally came, we were insanely excited to see our girls get out there and shake it.

seriously, i could watch that video about sixty bazillion times in a row.  for only meeting twice, i thought the squad did a damn fine job of learning that routine.  and when she finally rejoined us in the stands, we told her so.  she was pretty darn proud of herself too. 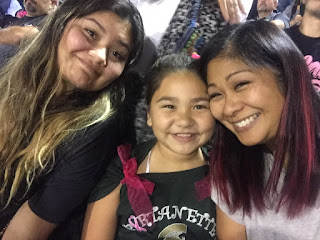 she had a blast hanging out with her friends, running around and hitting up the snack bar until the game ended.  coach says she's going to do another junior cheer clinic during basketball season, too.  i think the bean may have had just enough fun to be willing to do it again.  we'll see.

Email ThisBlogThis!Share to TwitterShare to FacebookShare to Pinterest
Labels: cheer, the bean is a big girl