taking the craftiness to another level

i've been on an organizing kick lately.  this is a good thing, especially for the hub whose frustration over what he calls my hoarding tendencies is never-ending.  the old lady has been a huge help to me as i go through stuff i haven't looked at in a long time, making me either toss or add items to the growing donation pile we've got going.

as you can imagine, my sewing supplies are a little out of control - this includes fabric, notions, accessories.  i've got several machines (regular sewing, serger, coverstitch) and it's been kind of crazy juggling the three of them on my desktop.  and so i decided to shuffle things around a little, moving the computer to the corner to make room so that they all are arranged nicely.  and then i saw this on facebook in one of my sewing groups (yes, i belong to quite a few of those): 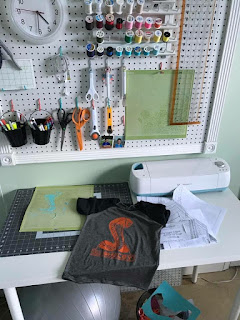 sorry, random person whose photo i swiped for inspiration.  i don't remember who it was, but you totally lit a fire under my ass to make one of these pegboard organizers for myself.  after perusing a few blogs and websites with instructions on how to do just that, the old lady and i headed to home depot.

this is always comedy hour, let me tell you.  neither of us is particularly handy in that way, and even after flagging down an employee for help we were pretty clueless as to what we needed to do.  i explained to the employee what we were trying to do, even showed him that picture, and he just kind of pointed to things and mumbled that he wasn't allowed to help us any further.  nice.

so we picked out some moldings that we thought would look nice to create the frame around the pegboard we'd found.  it was precut to about 2' x 4', and so we tried to figure out the measurements including mitering the corners to accomplish our objective.  it wasn't easy, but there was a lot of laughter.  and yes, i made her do the sawing.  she acted like she was annoyed, but i know she wanted to do it. 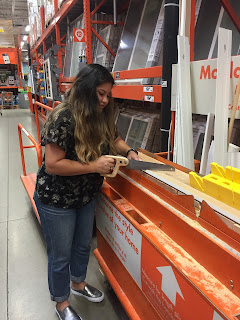 but when we realized that we hadn't accounted for cutting the corner on the other end of the molding, we gave up.  the miter box wasn't cooperating, we needed to pick up the bean, and we were just over it.  she was rather proud of the one end she'd managed to do, though: 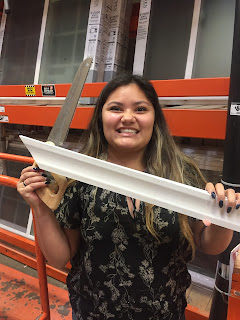 the next day, while she was at work, i decided to head out to ikea to see if i could find a ready-made frame that didn't cost an arm and a leg.  ikea didn't disappoint, and i found a perfectly nice one that seemed sturdy enough to hold my pegboard and accessories. 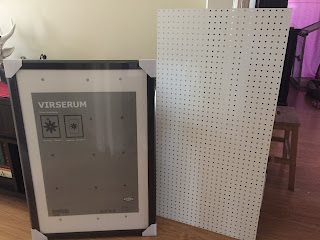 as you can see, the pegboard needed a little trimming down.  i wasn't excited to do this part, but after looking up a few things online i decided to suck it up and get it done.  i put a piece of painter's tape down on it and marked the line where i needed to cut, and then i headed out to the garage to see if i could even find the damn saw. 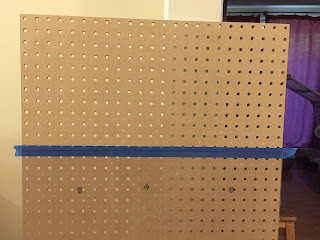 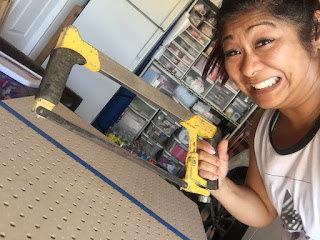 a couple of deep breaths later, i jumped right in. 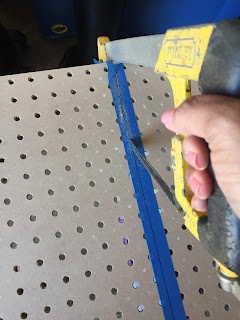 it went really well until the very end...when i managed to munch off a chunk of the painted side of the pegboard.  dammit.  i took it inside and placed it in the frame - thank goodness it did, indeed, fit - and here's what i ended up with: 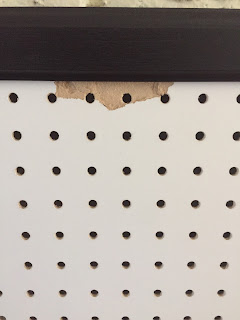 not too bad, i guess, right?  i had an idea in mind to cover it up, but i had to open the variety box of pegboard hooks and things i'd bought.  and, um...let's just say there were a lot of things in there that i had no idea what to do with. 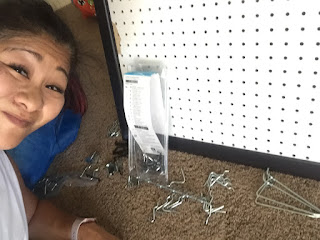 but in the end, i managed to pull my shit together and got it figured out.  i still need to find a couple of other things to hold some things i want to put up there, but here's what i have so far: 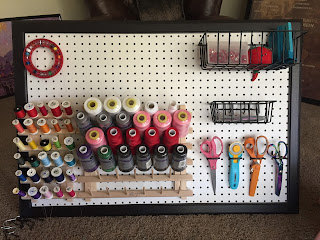 i wasn't at all sure that the hub would love the idea of putting this thing on the wall.  and i needed his help to do that, so i had to hope that this would get his stamp of approval or i'd done all that work for nothing.  here's where i wanted to put it: 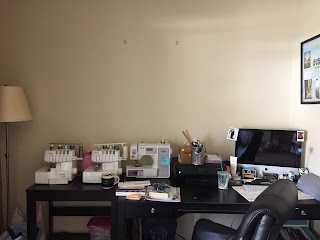 and when he saw it, i was super excited that he liked it.  was even proud of me for getting it done.  hahahahahah.  good thing he wasn't present for the process.  i would never have gotten through it between his critique and bursts of laughter, i'm sure.  anyway, he suggested that i change it to a vertical board and we could hang it in the little corner to the side of my machines instead, and we could decorate the wall i had in mind in another way.

Email ThisBlogThis!Share to TwitterShare to FacebookShare to Pinterest
Labels: organizing the goods, wan with a hand saw