the october birthday party train just keeps chuggin' along.  this time, it was for one of the bean's friends who she first met way back in our gymboree play & learn classes who ended up being in her transitional kindergarten class and has been her classmate almost every year since then.  his family always throws a kick ass party, and when we got the invitation and i saw that they were doing it at the local country club, i knew it was going to be a good time.

i was apparently so dazzled by everything that i neglected to take a lot of pictures.  oops.  it happened to be a cloudy, drizzly day - which isn't a bad thing.  and when we pulled into the parking lot the first thing we saw was the giant bounce house squeezed in underneath the entrance to the club.  definitely looked like party central.

inside, we found a lot of our friends already there, and while we'd already lost the bean at the bounce house, it didn't take long for her to find the extensive craft table.  there were fun things to paint and color and glittery tattoos and snacks, and it was quite the minecraft-themed wonderland. 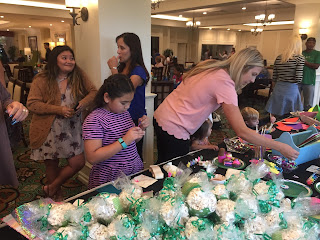 there was a DJ/announcer/performer who alternated between playing prerecorded music, jamming on his guitar with covers of popular songs, and organizing the kids in some fun activities. 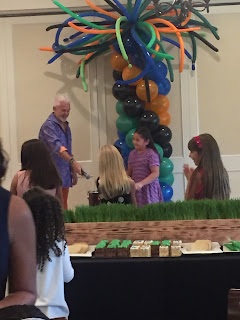 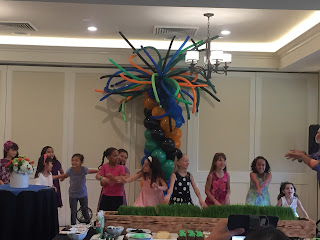 meanwhile, the old lady and i discovered the mimosas. 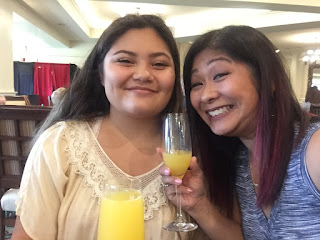 and there was a photo booth. 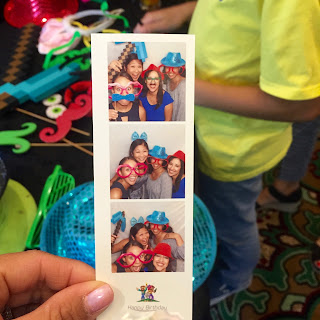 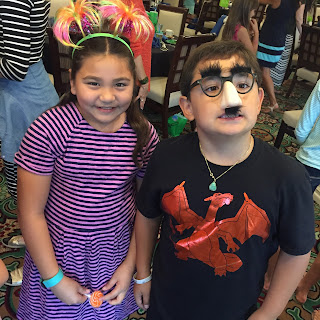 the food was really good, too.  there was a create-your-own-omelette bar, a salad bar, several hot entrees, and a whole table of kid-friendly grub like pizza, mac & cheese, chicken fingers.  good thing too, because i'd been sitting down while i drank that mimosa and then remembered that i hadn't really eaten when i got up to find some sustenance.  heh.  i made myself a nice plate of food and then figured i was good to go with round 2. 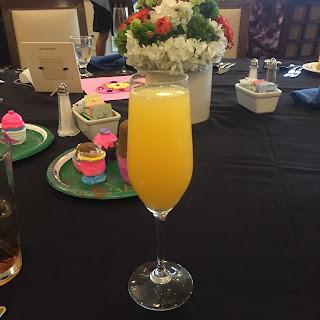 and then the kids started playing that stupid bottle flipping game - they literally take a half-full bottle of water, toss it in the air to flip it and watch it land, hopefully upright.  i suppose this is a good thing though...it keeps them entertained for a long ass time, no electronics or screen time involved.  but still...lame-o. 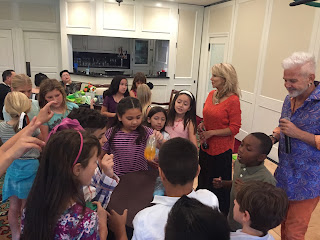 while they did that, we discovered the rice krispy treats and cookie decorating station. 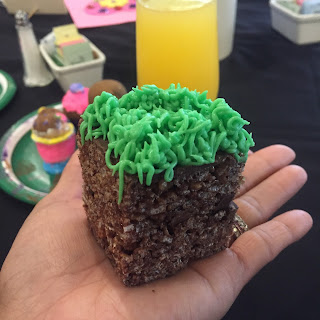 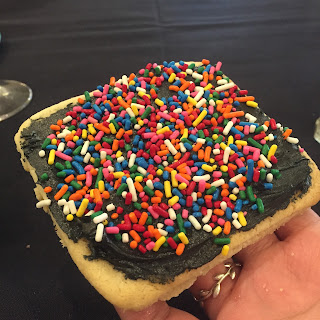 the party raged on for a few hours, and then they wrapped it up with a karaoke session. 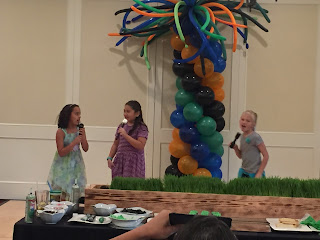 our house is literally down the street and around the corner from the club, so we could easily have walked home.  you know, since i'd managed to take down 2.5 mimosas.  but by the time we finally got outta there, i'd eaten more stuff and drank a ton of water.  and so we scampered through the rain and into the car and drove the 45 seconds home.

i'm dying to see how these parties evolve as the kids get older.  i hope mimosas continue to be part of the program...for the parents, at least.  heh.
at October 27, 2016

Email ThisBlogThis!Share to TwitterShare to FacebookShare to Pinterest
Labels: so not an alcoholic, the bean is a party animal