oh, what a night

remember a few months ago when i told you about the twitter exchange i had with emily of my beloved dixie chicks?  oh yeah...it was finally time for some major DCX fangirling.

but first - i had to find something suitable to wear.  now, i've been to all four of their previous headlining tours.  i even came across an old ticket stub from the first one, way back in 2000: 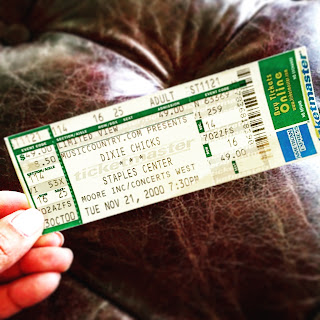 ah, the memories.  the hub and i had just gotten together, concert ticket stubs were still a thing (print-at-home is a lot easier, with no worrying about tickets getting lost in the mail, but it's just not as fun), i was about 15 pounds lighter.  good times.

anyway, i couldn't find my t-shirt form any of those concerts.  of course.  and so i hunted on ebay till i found one.  it was an XXL, which was perfect since i wanted to cut it up and make it cute anyway. 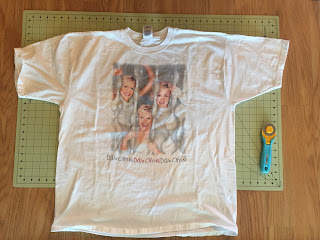 as i do, i waited until the last minute to work on it.  procrastination is always the name of the game, right?  and although i had total confidence in my sewing skills to pull this off, i was still kind of nervous as i got to work with that rotary cutter. 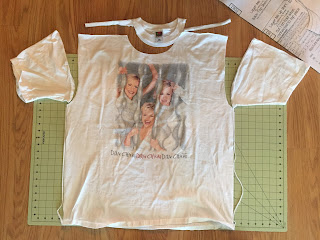 after i finished working on the body of the shirt, i agonized for a bit over what to use for the sleeves.  i sent this to my co-leader and she helped me settle on the solid pink: 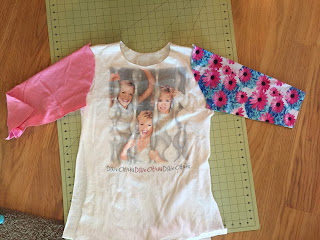 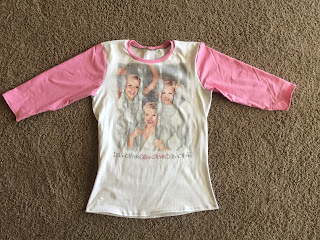 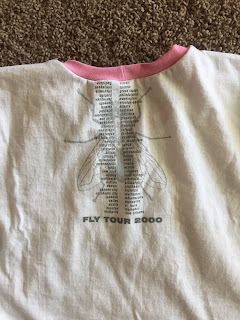 then it was just the basic routine of getting ready to hit the bowl - gathering snacks and things to eat for dinner, getting myself cleaned up, and then the hub got home.  took him all of about 5 minutes to get ready and then we were on our way. 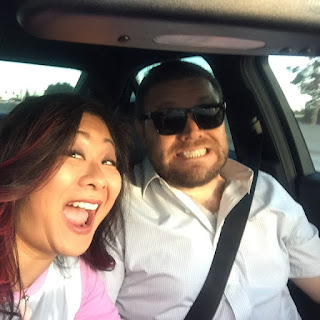 as we battled rush hour/typical l.a. traffic, we drove past something i'd noticed last week on the way to the price is right taping.  i don't watch america ferrera's show on NBC, but i recognized the exterior of the set for "superstore." 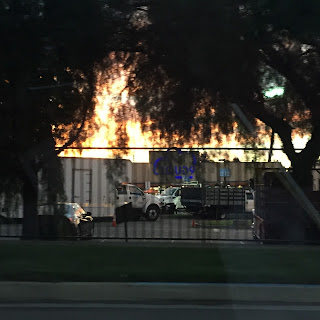 and then after we got off the freeway, we pretty much sat on the offramp for about half an hour, aka for-freaking-ever.  it was almost 7:00 when we finally pulled into the valet parking lot, which is insanely pricey but so incredibly convenient and easy to get in and out of. 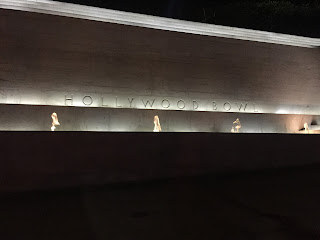 elle king, the chicks' opening act, was onstage performing for the super excited crowd.  i'd not heard of her before, but she had a great voice and was really entertaining. 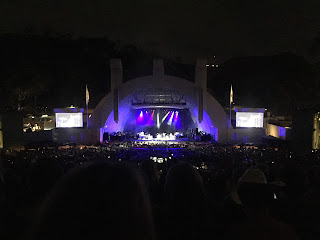 oh, and we'd picked up these on our way to our seats - after a bit of confusion since no one seemed to know where the "west box office" was.  one guy said "oh, they tore that down a long time ago."  helpful.  anyway, i was excited to have these in my hand at last.  i know it says "pre show," but the email confirmation i'd received told me that our meet & greet was to happen when the concert was over. 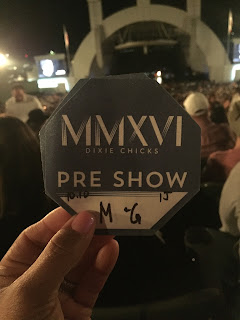 doesn't he look super excited to be there?  he assured me he was stoked to have another date night, though - 3rd one in as many weeks!  it's a record, folks. 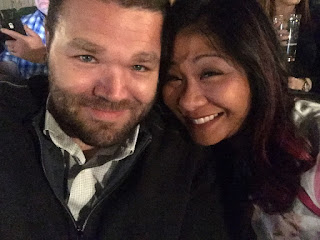 around 8:15, the chicks hit the stage at last.  this was the final show for this tour, and i was SO excited: 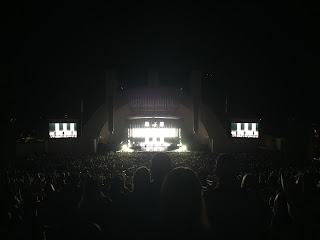 i'd taken a peek at the set list beforehand, so i had an idea of which songs we were going to hear.  the dixie chicks are such great performers, from natalie's beautiful voice to emily's and martie's amazing talent with a long list of different instruments.  i was loving every minute. 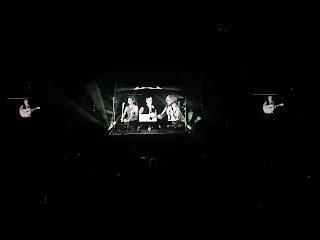 of course, there were a few joking references to the trouble natalie had gotten into a decade ago with her political comments.  and they didn't disappoint when trump's face made appearances on the video screen during both "goodbye earl" and "ready to run." 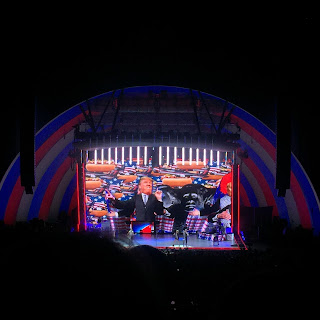 they exited the stage after a fake "thank you, g'night!" and everyone stayed in their seats waiting for the encore. 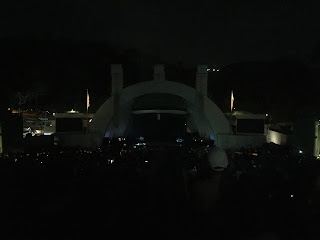 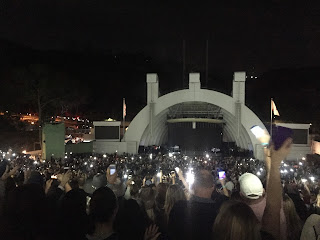 they returned to the stage to sing two more songs, and then that was it. 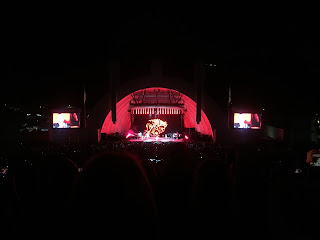 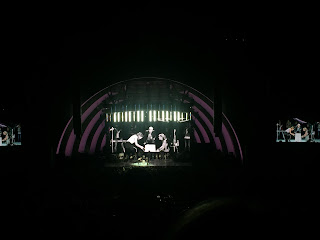 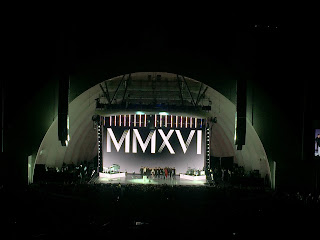 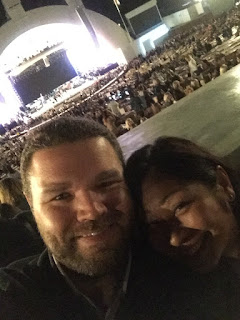 and then there was even more confusion as no one seemed to know where we were supposed to go for our meet & greet.  it didn't help that there wasn't an "official" meet & greet set up for this tour - most artists will have something set up for a handful of fans from fan clubs, contests, what have you. one lady even told me "i don't know where you got those tickets, there's no meet & greet tonight."  the hub shot me a "i knew this was too good to be true" look while i whipped out my phone and called the girl who'd sent me the email.  she must've had an idea that things might go awry because she ended the email with "call me at this number if you have any issues."

luckily, she answered after a couple of rings and told us where to go for further instruction.  we found ourselves with a group of 4 folks who'd either entered a contest or gave a huge donation to one of the charities that the dixie chicks support, and then we were met by a production team member who led us here: 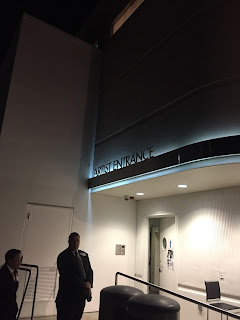 we went through a few more security hoops before being led to wait behind this curtain.  i was dying to take more pictures, but i didn't know if it was cool and i didn't want to get yelled at. 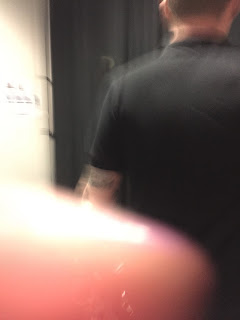 these were posted at every door: 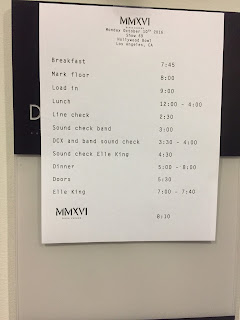 i could hear natalie, emily, and martie's voices behind the curtain and caught glimpses of them hanging out with drinks in hand whenever someone came through. and then i heard someone say "adrian, come with me and i'll take you upstairs."  i turned my head and adrian pasdar, natalie's husband came out and stood right in front of me.  he's done a few tv shows and had parts in a handful of movies, and some might recognize him from the show "heroes."  he was in the "goodbye earl" video and abc family's "the lying game," which the old lady and i used to love watching.

and then a lady motioned towards me and the hub to enter.  this part is kind of a blur for me and i really wish i had more pictures, but we went through that curtain and there they were.  natalie noticed my shirt first, commenting that they'd done that photo shoot here in l.a., and i blurted something out about the shirt being vintage because duh, they so didn't know that, right?  we chatted a little about how we had come to be there with emily, who remembered who i was as soon as i mentioned twitter. and i know i traded a few words with natalie about it too, but who knows what the hell i said.  martie seemed a little distant and didn't really say much to us, but that's okay.  i know i asked them if we could finally expect some new music from them after a decade of silence, and i just got three big grins in response.

the hub came up behind me and congratulated them on the last stop of their 70-show tour, which reminded me that hey! he was there too!  and i told them that i'd dragged this poor man to all of their shows, to which they all grinned and told him he was a good man.  and don't i know it.

here's the money shots, which is all i know you care about anyway: 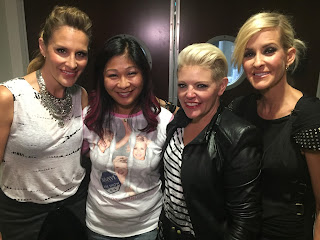 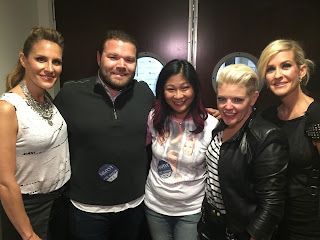 and then that was it.  i totally gave them all hugs, which they probably didn't want but accepted anyway, and then i walked on a cloud back through the curtain and out the door.  i was still reeling from the whole experience, and we made our way back to the car and drove home.