our price was wrong

a couple of months ago, i got an email from one of those seat-filling companies that offers free tickets for show tapings.  they had a bunch of priority seating tickets available for "the price is right," which are kind of awesome because they guarantee you a spot in the audience.  a few of the dates happened to fall during the week that i knew MIL would be around, and so i hit up my co-leader to see if she was free.  she's always up for game show shenanigans, and we marked our calendars.

contestant hopefuls for that show always come up with the cheesiest, cutest, silliest t-shirts to wear for their appearance.  of course, we totally procrastinated and didn't end up putting anything together until the night before.  of course.  and here's a confession:  neither of us had actually watched the show in years and years.  like, not since bob barker was still the host.  heh.  and after perusing some ideas online, i proposed that we create a simple design that would look like a presidential candidate logo using the names of the show host and announcer - drew carey and george gray.  one trip to target to get basic matching tees, a quick session with the die-cutter and heat press, and we were ready.

our call time was at 8:30, and the show is taped at television city (right next to the grove).  because you never know what traffic is going to look like on a monday morning, we headed out super early.  we managed to arrive just before 8, and found a parking spot pretty easily. 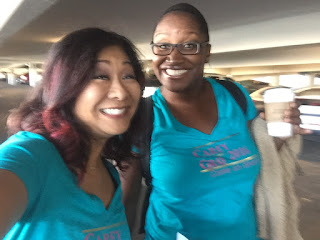 as we made our way out of the parking structure and around the back side of the farmers market, we joined other folks heading to the same place - they were pretty easy to spot because they were all dressed like we were.  heh.  and the line was already down the street. 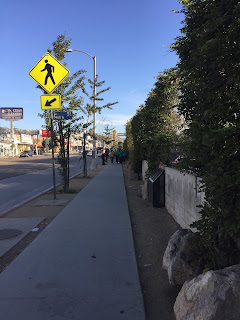 it wasn't a very long wait for us, as we flashed those priority tickets and were handed cards with our line placement numbers.  after showing our IDs, we got to join a second, much shorter line not too far away. 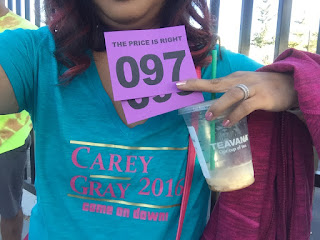 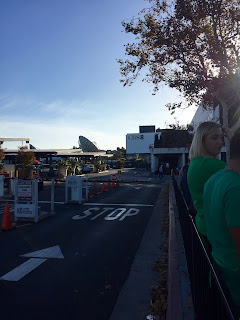 from there we were moved to a holding area, where we were seated in numerical order according to our purple cards and filled out confidentiality/release forms. 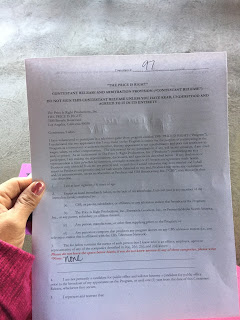 and off to one side there was a little shop selling souvenir tees and postcards and things like that.  i figured we'd hit it up a little later. 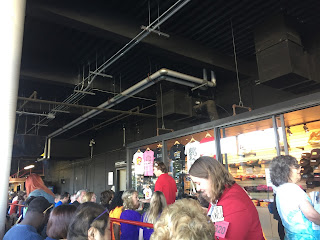 staffers were making their way down the line to give us those famous yellow name tags, take our forms and check our IDs.  turns out that they wouldn't use nicknames on the tags - only legal names as listed on your ID.  i didn't know that, but whatever, we were at the price is right! 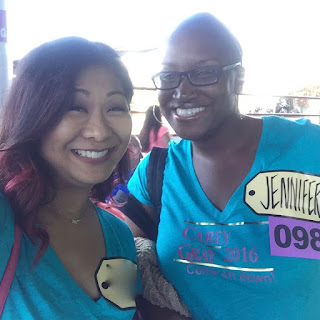 but then when the guy who was taking the forms scanned mine and noticed that i'd recently been a contestant on another show less than a year ago, he looked up at me and said "um, i'm sorry, but you'll be ineligible to be a contestant today."  and obviously, that went for both of us.  WOMP WOMP. 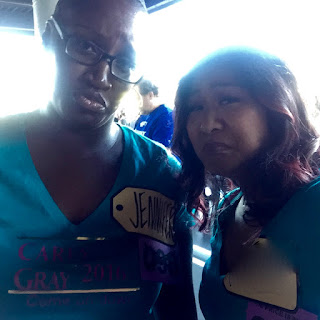 he handed us a giant magic marker and instructed us to mark a big ol' X on our placement numbers, effectively rendering us pretty much useless except as audience members cheering on the contestants on the stage. 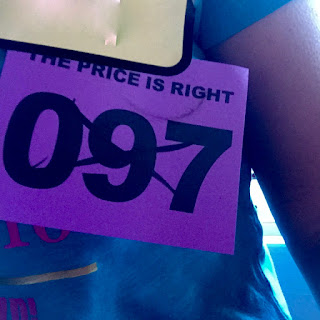 but i tried to cheer us up - there are 325 audience members in each taping.  only 9 are chosen for contestants' row, and of those, only 6 actually make it onstage.  not to mention, that immediately took the pressure off of us - no jumping and screaming and spirit fingers were required of us anymore.  and so we could just sit back, relax, and look around at the others and make predictions as to who might be chosen.

a little later, we were on the move again - this time, to take a souvenir "green screen" photo.  this took us right past the restroom and that little shop, which was only available at that time.  we wouldn't be allowed to come back to this area later.  but since we weren't getting the full experience this time around, i decided i didn't need any t-shirts or magnets or anything like that. 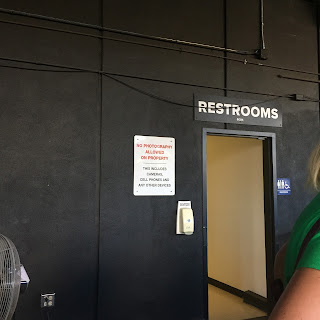 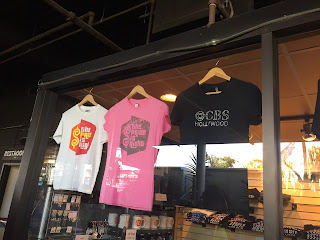 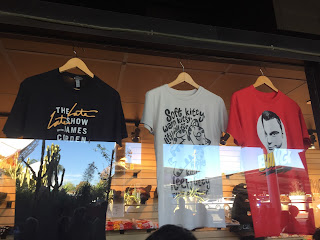 wanna see our green screen photo?  it made us look like we'd actually made it onstage, which we had to settle for since i knew we wouldn't get to take pictures inside the studio. 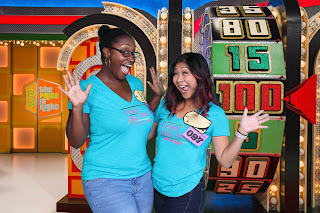 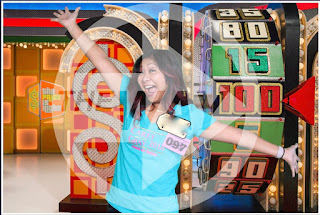 after taking our photos, we moved to this area where they took about 20 people at a time to talk to the producers.  this is where you have to turn it on - enthusiasm, jumping, cheering, jazz hands, the whole nine.  of course, because of the big X through our numbers, they said a brief hello to us and moved on  down the line.  WOMP WOMP. 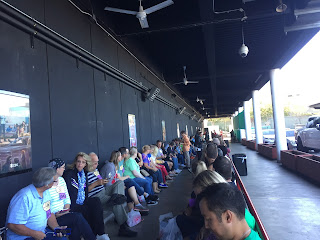 from there, we went through the metal detectors, handed in our phones to security, and sat down to wait a bit longer.  there was food for purchase, more restrooms, and a couple of show reels to get everyone all excited and warmed up.  at about 11:45, they finally took us into the studio.

i'm sure you've watched the show at least once, right?  well, that studio is tiny compared to how they make it look on tv.  the audience is really small, and the stage is not much bigger than, say, a stage in a high school auditorium.  but it's bright and colorful and there's a DJ playing music to get everyone up and dancing and riled up.  they placed us in the third row, right in the middle behind contestant's row - so we were super excited because we knew we'd get at least  little face time on tv.

the announcer, george gray, came out first to talk to the audience and give us the lowdown on what to expect.  he was really funny and personable, and then he brought out drew carey.  they make a great team, playing off of each other and ad-libbing constantly.  it was so much fun, and the time went by really fast.

if you're ever in the area, you should definitely go to a taping!  it's so much fun, and although they tell you you'll be there for at least five hours, it doesn't feel like that long.  everyone is excited and friendly and hopeful, and it's just a really fun environment to be in.

Email ThisBlogThis!Share to TwitterShare to FacebookShare to Pinterest
Labels: game shows are fun