okay, so you know how i've pretty much done just about everything you can do to my hair, right?  it's been long.  it's been short.  it's been pink.  it's been purple.  it's been brazilian blowout'd.  and about five years ago, it was even digital permed.  then a few weeks ago, i went short-ish again.

during one of our chitchat sessions while in vegas, i got to thinking about that digital perm again and asked the girls when they'd last gone to have one done.  seems that the digital perm isn't really a thing anymore, but dailygluttony said that she'd heard about something called the "new wave" that was gaining some popularity for offering soft, easy beachy waves.  and who doesn't want that, right?  she showed me a picture she'd come across on instagram done by a stylist who worked out of a salon in chinatown, and i was immediately intrigued.

you know once i get a bug up my butt about something new to do with my hair, i'm obsessed and can't stop thinking about it until i finally just go and do it.  and when i contacted daniella about getting into have one of these newfangled new wave perms done, she threw out an opening that was just two days away.  i took it.

while her salon was literally located just around the corner from the gold line's chinatown station, i ended up driving there when i got to my local station and found zero parking available.  boo.  luckily, i didn't hit too much traffic and pulled into the underground parking lot a few minutes before my 10:00 appointment time.  i walked upstairs and found daniella already there, getting ready for the day.  it was a super cute little salon, and it turns out she'd only moved in several weeks ago. 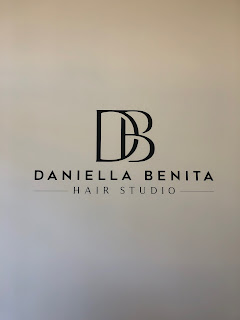 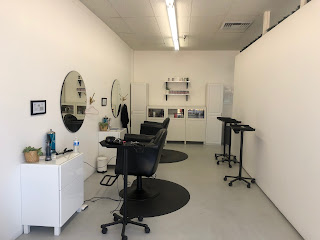 she's super sweet and really friendly, and once we got some paperwork out of the way i sat down in the chair and eyed the tools of her trade. 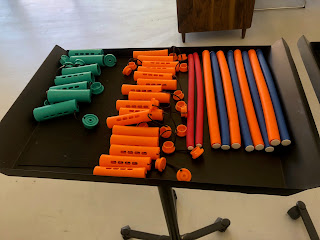 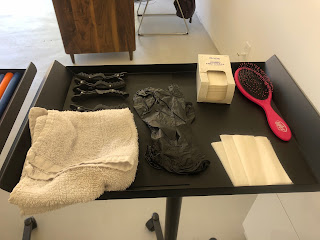 she used a mixture of those perm rods to roll my hair up, and as she started distributing the perm solution throughout it all the smell immediately took me back to the old days, back in the 80s when my grandma would give me perms on the regular.  funny how decades go by, times change, but the smell of perm solution stays exactly the same. 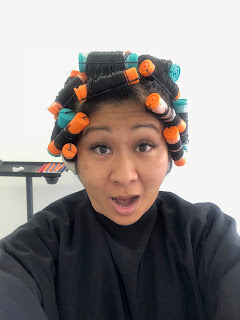 now, because some of my hair is still bleached and color treated with the pink, she left it in the rods for an abbreviated time to keep it from getting damaged.  as soon as 6 minutes were up, she had me laying back with my head in the bowl, and the rods came out and the solution rinsed out.  after she dried it gently using just her hands and the hair dryer, the back looked like this: 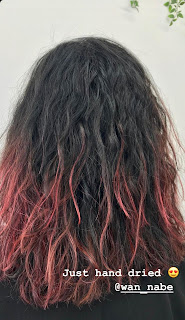 we decided that i'd let it air-dry the rest of the way, and then i headed outta there and made my way home.  as i drove (thankfully, it was just around noon and the traffic was at a minimum) it continued to dry...and puff up.  like, by the time i got home it was so big and fluffy i was feeling a lot like roseanne roseannadanna (google it).  i probably should've taken a picture for you, but i couldn't bring myself to do it.  and then i was feeling some serious pangs of regret, but i decided that it just needed a little experimenting.  so i pulled out my trusty beachwaver curling iron and got to work.  when i was done i smoothed a little serum through it and it ended up like this: 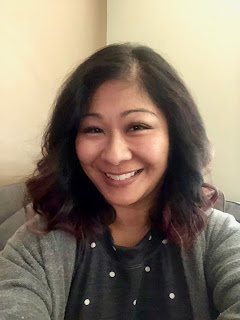 it's been about a week and a half now.  my hair has had some time to adjust to the shock of the added texture, and while i'm still not sure how i feel about it, i'm trying my best to focus on the positives.  i've been using a t-shirt to dry it vs. my bath towel, which is supposed to be really good for cutting down on frizz.  and then i just brush through it after getting as much of the water out as i can (and i figure it's a good sign if the moisture is sticking around rather than drying up in no time, yes?), work some curl cream through it, and let it air dry.  this is a big part of why i wanted to do this in the first place - with summer coming, i'd really love not to have to bust out the blow dryer, which always leaves me overheated when the temperatures are rising outside.  and this is what it looks like once it's dry (ignore the no-makeup face and don't judge me for my "friends" t-shirt): 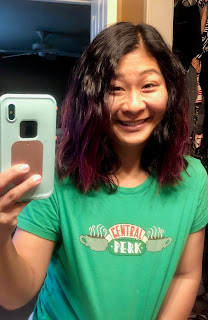 the old lady isn't a fan of this look, but she's gonna have to get used to it because this is what i've got - for the time being, anyway.  my plan is to let it grow out at least for the next six weeks, and i'm thinking the waves will relax even more by then.  and then i'm thinking i'll chop off a couple more inches, which should leave me with a super summer-ready 'do.  i'm also liking how the added texture makes it really easy to add those bigger, looser beach waves with my curling iron.  and those curls stay put until i wash them out again without having to add any extra product.  bonus!

Email ThisBlogThis!Share to TwitterShare to FacebookShare to Pinterest
Labels: hair