we have discussed my propensity for new things to do with my hair (and makeup and clothes and nails and and and...), yes?  i'm such a sucker for trying out cool stuff, and god knows i bore really easily.  for a long time, i had the super cute bob 'do a la posh (and swiped from my friend FGD).  but i got tired of the constant trips to the salon to maintain the cut, and finally threw in the towel and started growing out the mane again.  it's actually gotten pretty long - past my shoulders, a length i haven't sported since the hub and i got married 7.5 years ago.  and of course, i was getting the itch to do something new to it.

but because i've become rather attached to the length, i didn't really want to chop it all off again.  i considered maybe doing it this summer, but i knew i'd miss it.  and i'm finally figuring out how to do fun braids and buns and things with it, so that's out.  highlights were very briefly considered and then also disregarded - it just doesn't look great on me.  and then a couple of weeks ago, for the general hospital panel at paley center, i took a curling iron to it and really liked how it looked with some waves in it.

and then one of the girls on the style & beauty message board i frequent mentioned getting a digital perm.  my friend winnie got one of these awhile back, too, and seems to be pretty happy with it.  what exactly is a digital perm, you ask?  well, it's still a perm with the same chemicals and no washing for two days afterwards, just like in the 80s.  but those crafty koreans found a way to make it work so that the word "perm" doesn't automatically = poodle 'do.  no, they figured out that rolling the bottom half of one's hair in medium to large curlers that have been heated creates a much looser, flattering curl.  and it's a "digital" perm because the heat in the rods comes from a machine with a digital display that warms them to the optimal temperature.  a lot of the research i did online showed me some really bizarre looking contraptions that looked like an octopus - check this out (photo swiped from google images): 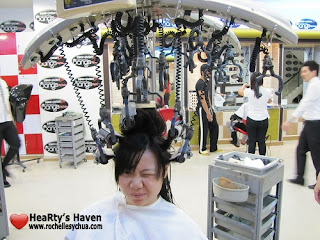 after consulting with my friend grace, who lives in an area saturated with asian salons that offer digital perms, i wasted no time in making myself an appointment for one of these newfangled perms.  after dropping the bean off at school and running a few errands, i made my way here: 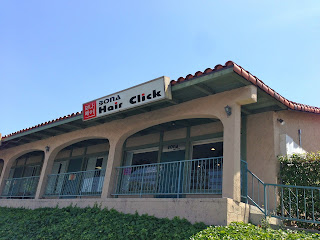 don't ask me what that name is all about.  i'm sure it makes sense to someone.

the stylist greeted me with a smile and then showed me into a dressing room to change into a gown.  cute, right?  heh. 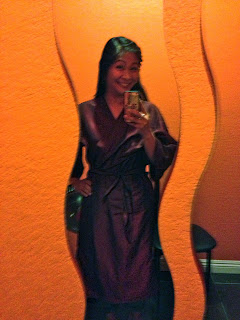 after she washed my hair and squirted some totally 80s smelling stuff into it, i showed her a couple of pictures i'd saved on my pinterest boards.  she nodded knowingly and got right to work.  while she didn't have one of those octopus-looking machines, the one she used did have a digital display: 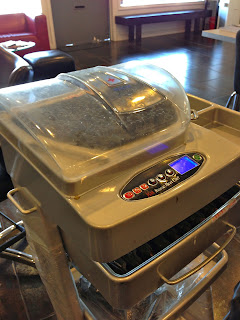 and then she clamped the cone of shame around my neck. 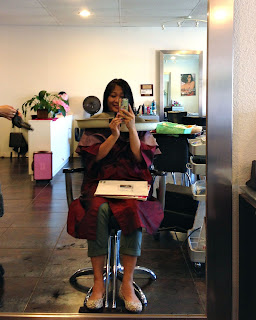 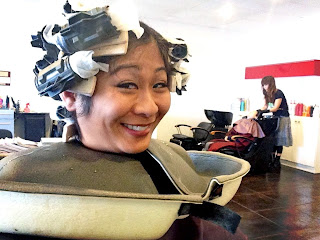 there i sat for who knows how long, while the curlers cooled down and she worked on a couple of other clients who walked in.  the cone of shame finally came off, replaced by a smaller version that she used to catch the excess perm solution. 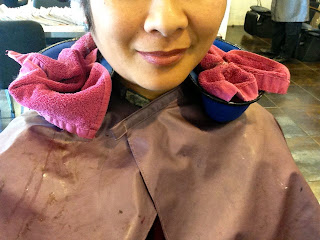 one more trip to the shampooing station, and then i got my first look at the results. 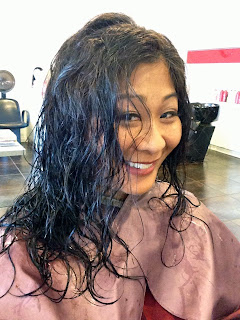 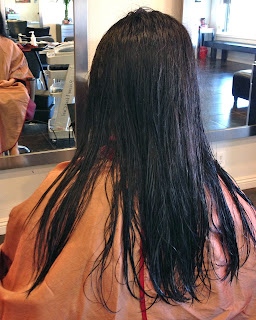 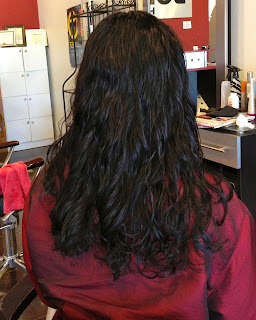 she told me that air drying was the best way to care for the curls, although because she was a "professional," she took a blow dryer to it so i wasn't walking out with wet head.  she smoothed some product through it before grabbing chunks of hair, twisting them up, and blasting the twists with the dryer.  a little shine serum mixed with styling wax on the twists came next, and i was left looking like this: 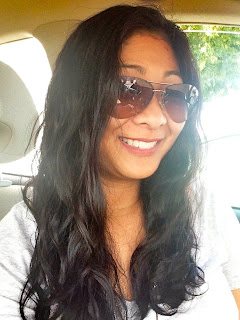 i LOVED it.  despite the lingering smell that wafted up every time i turned my head, i was really pleased with the way this perm had turned out.  most definitely not the same thing i used to get two decades ago.

the next two days of not washing my hair was pure torture.  i'm not really one of those girls who can skip a day, especially since i either run or do some sort of workout on most days.  so i felt really gross for a good 48 hours until i was able to scrub my scalp again.

and of course, as with most trips to a salon, i've not been able to recreate that finished look just yet.  it's been a week now, and i'm still getting the hang of this permed hair thing.  i've tried new products, busted out some stuff i already had, air dried it loose, air dried it in twists (which takes for-freaking-EVER), put it up in little buns.  i bought a diffuser attachment for my hair dryer that was supposed to fit, but when i tried it the damn thing popped right off and smacked me in the face.  FAIL.

for the most part, i've liked how it's turned out with each technique i've tested out, but nothing has made me as happy as how it looked that first day.  i'm going to keep trying and i swear, i'm gonna get it if it's the last thing i do.

Email ThisBlogThis!Share to TwitterShare to FacebookShare to Pinterest
Labels: hair, not your mama's perm