who IS that caped crusader?

you already know that i'm a big fan of superhero events, the folks who created and organized the hollywood half.  ken and sabrina are really friendly, super accessible to those who participate in the races that they run, and also make it a point to support other local running organizations.  if they're not actually running in races, they're often spotted on the sidelines cheering and supporting the runners.

so when they put out a call last week for superhero "ambassadors" - people who love to run and share their enthusiasm for the sport with others - i filled out the application after just a moment's hesitation.  because running is kind of a solo activity for me, i wasn't so sure that i would be a good candidate for a duty that requires being social and stuff.  i'm not really the "running buddy" type, know what i mean?  but then i decided, what the hell - it could be fun, and part of the job is to represent "team superhero" at races and expos and things.  so i filled out the application and hit "send" before i could change my mind.

i'm pretty sure you know where this is going.

just a couple of days later, when i opened facebook, i'd gotten a notification that i'd been added to a private group called "team superhero."  i was sitting in my parked car, having just dropped off the bean, and i kid you not:  i literally yelped and fist-pumped (before glancing around to make sure no one had seen me). 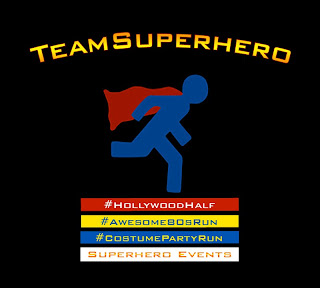 the rest of the group is pretty diverse - all different ages, shapes, sizes, ethnicities - but all love to run.  or, like in my case, run/walk.  everyone commits to at least ten races per year and a willingness to represent the team at as many running events as possible.  i still have yet to learn more about what's in store for me as an ambassador with team superhero, but there's one thing i can count on:  it's gonna be a blast.

and now i'm on the hunt for a cute, maybe slightly obscure female superhero that i can create a running costume for.  got any ideas?
at April 29, 2013

Email ThisBlogThis!Share to TwitterShare to FacebookShare to Pinterest
Labels: running my ass off, team superhero