my third and final half marathon of 2013 is done, done, done.  yessssssss.

the girls and i kicked off the fun with a visit to the race expo.  looks familiar, yes? 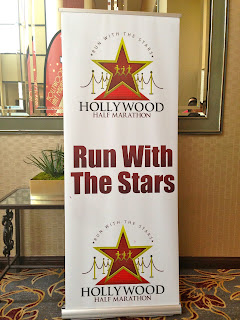 while picking up my goody bag and bib and stuff was a breeze (it always helps to go early on a weekday), i was a little disappointed that there weren't as many vendors this year.  no biggie though, that just meant i'd spend less money.  and i got to catch up with my buddy interview, who was picking up his stuff despite doctor's orders to stay off of his shattered knee.  poor guy.  he was so disappointed to have to sit this one out, after training for the last few months.  before we left, we took a peek at this year's pace car: 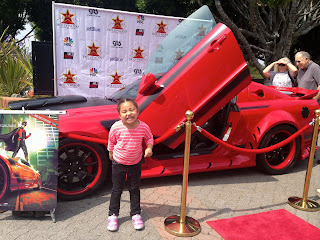 yay for my legacy status (which you can't really see, because my fat fingers are covering the text)!  basically, this means that i ran the inaugural race and am continuing to participate.  i'm hoping to keep it up for as long as these old bones will let me. 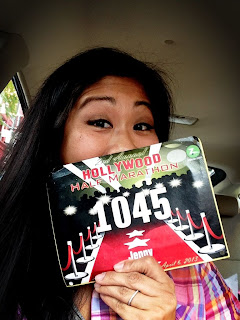 with some time to kill before check-in time at our hotel, we headed over to the grove to walk around and do some window shopping.  although we did make a purchase here: 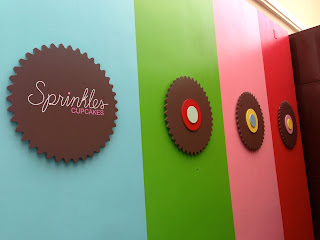 the bean, as always, is a ham and a half. 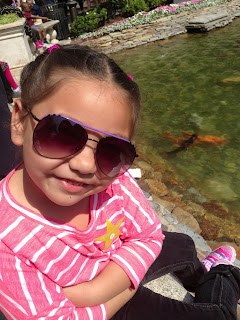 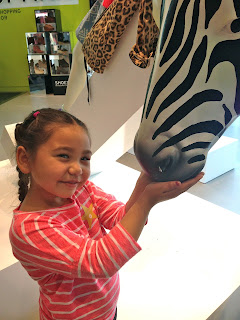 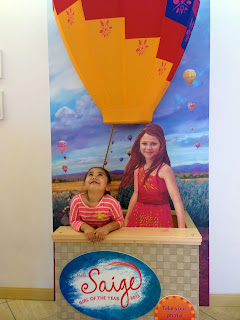 no, that ISN'T the teen perusing an interesting array of reading material at barnes & noble. 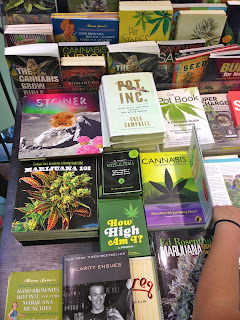 this was home for the night.  schwanky, yes? 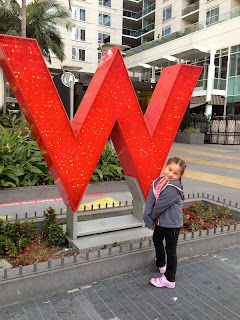 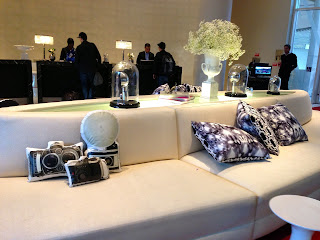 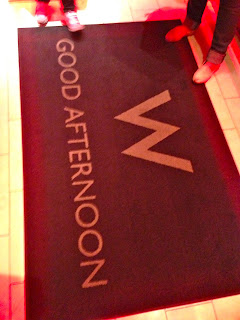 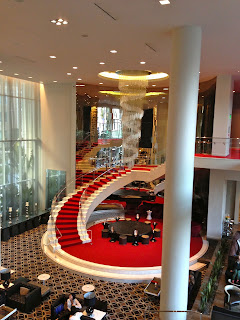 and just across the street: 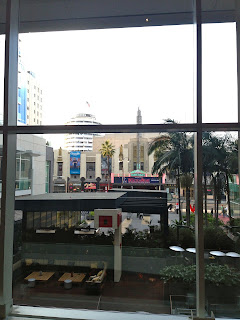 when the girl at the front desk caught sight of my traveling companions, she worked a little magic and moved us from the room we'd been previously assigned to on a higher level down to the 4th floor.  there's a very popular rooftop nightclub in this hotel, and the noise would've kept us all up until the wee hours.  so instead, we were in a lovely room on the same level as the spa - ensuring peace and quiet.  so nice! 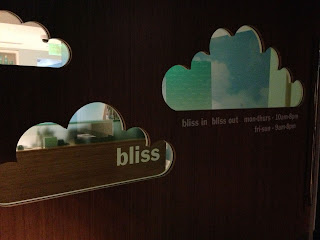 ...which translated into awesome toiletries in our bathroom.  i'm now addicted to that lemon-sage body butter. 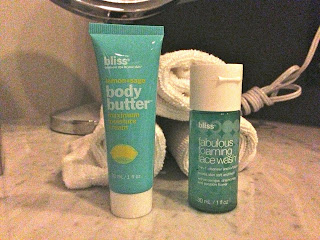 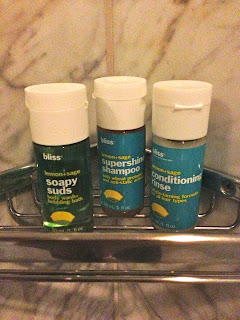 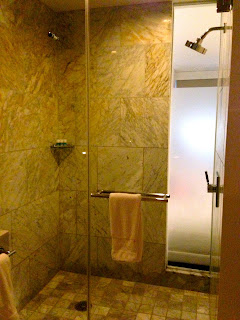 the teen took one look at that glass panel in the shower and quickly decided she'd wait to take one until we got home the next day.  hey, she wasn't running - who cares?

the room was pretty sweet.  the bean was a big fan. 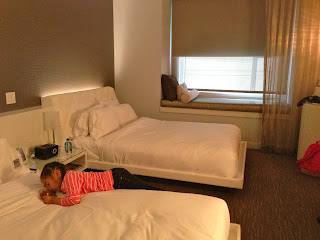 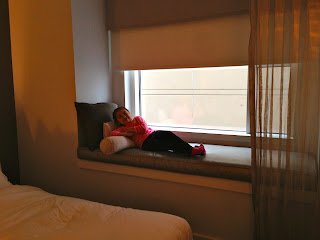 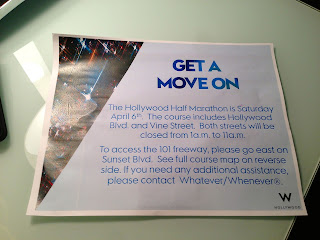 had you been a dunderhead and forgotten to bring a charger for your phone, iPod or what have you...the w has you covered. 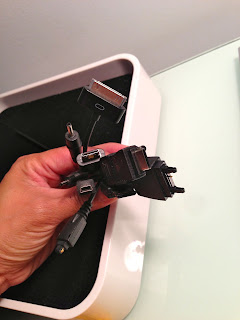 and check out the blinged-out peephole! 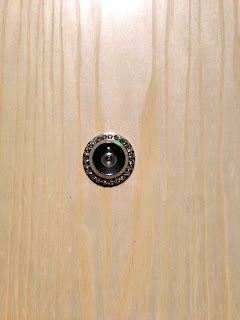 after denying my children the opportunity to snack on $7 cracker jacks, we decided to head out and find some food. 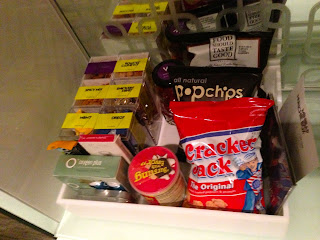 a quick yelp search took us to juicy burger, just down the street.  well, and the pizza joint next door for the bean.  we took our food to go and scurried back to the hotel to enjoy it in the comfort of our room. 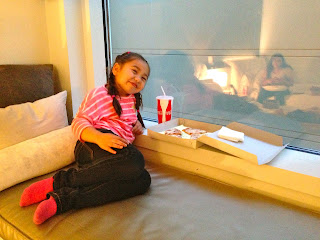 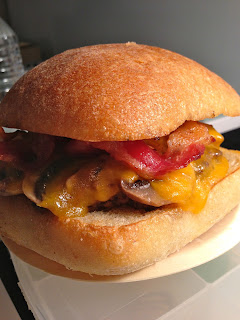 my legacy status gained me entry into a little pre-party at the montalban, just across the street.  i had no intentions of drinking or staying very long, but i did want to get into the legacy group photo that was planned.  so after making sure the girls were good to fly solo for about an hour, i threw on a jacket and headed out. 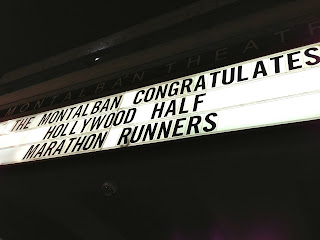 inside, other legacy members were chatting and hanging out.  i stood there and watched the laker game on the big screen.  i should probably get over my anti-social ways if i ever want to make new friends, huh? 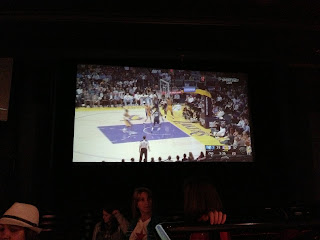 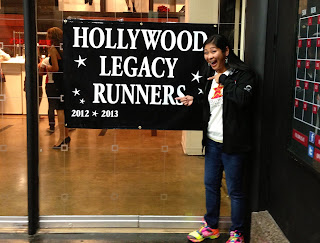 i wasn't totally anti-social the whole time.  i did get to meet some fun people i've been chatting with on the facebook page for the legacy group over the last year. 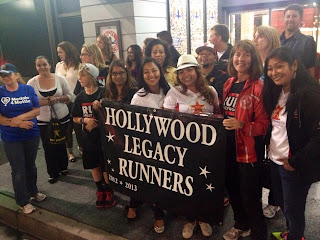 the group broke up not long after this shot was taken, though.  we had an early wake-up call the next day, and 13.1 long miles to run.  i laid all my stuff out, kissed the girls goodnight, and that was that.
at April 15, 2013