i am a huge "general hospital" fan.  if you don't give two shits about that show, i'm warning you now:  this post is nothing but one long fangirling session over it.  come back tomorrow for something else that might be more interesting to you.

i love that show so hard.  this month, they celebrated their 50th anniversary - bringing back a whole bunch of characters from years past and sending me on an awesome trip down memory lane.  of course, i haven't been watching all fifty years - duh.  i'm old, but not quite that much so.  and over easter weekend, soapnet indulged all of us longtime GH fans with a fantastic marathon of fifty fantastic episodes starting from the very first broadcast and awesome highlights all the way through to the present.  it was phenomenal.

and so i was elated/ecstatic/excited/some other fun words that start with "e" when my friend ashley told me via twitter that there was a panel scheduled at the paley center that would be attended by the show's head writer, executive producer and a handful of the cast members.  i clicked on the link, checked my calendar to make sure the date worked, and happily ponied up the $20 (plus fees) for two tickets.  why two, you ask?  well, i've somehow managed to get the teen hooked on GH too, to the hub's dismay.  he thinks soap operas are for old ladies.  old ladies who eat bon bons and have twelve cats.  hmph.

when the day of the panel finally came, i was a total eager beaver.  i even curled my hair and put on some lipstick. 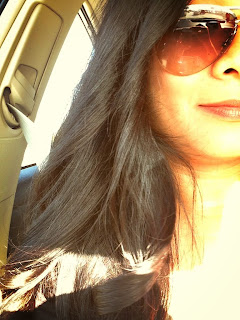 i was seriously so stoked for this and somehow timed it so that we arrived kind of ridiculously early.  but as we turned the corner and the paley center came into view, we realized it was a good thing.  being a general admission sort of production, there was already a fairly good-sized line waiting at the door.  luckily, we found parking in a lot across the street and scrambled out of the car to head over.

as we walked towards the elevator, a familiar-looking figure strolled past us.  she looked to be in a bit of a hurry and really distracted, which worked in my favor because i totally stopped in my tracks and gaped at her with the most ridiculous, stupid starstruck look on my face.  the teen, who was walking ahead of me, had noticed her too.  she turned around to see my reaction, and was totally cracking up as she watched my frozen stare.  oh - who was it?  it was finola hughes, who plays "anna devane." she was totally my hero back in the 80s when she was one of the most prominent characters on the show.  she's so gorgeous and i totally remember watching that awful "saturday night fever" sequel, "stayin' alive" just to see her strut her stuff with john travolta.

see, i told you the line was long. 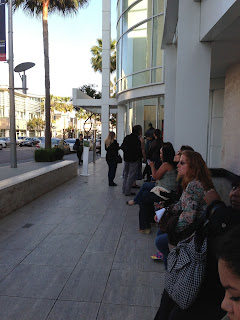 i'm pretty sure the teen was the youngest person there. 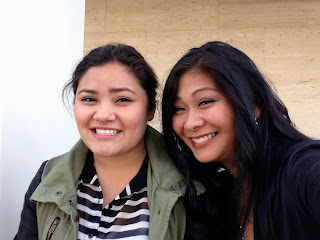 a few minutes later, someone walked out of the building and greeted a few of the ladies in the line ahead of us.  it was john j. york, who plays "mac scorpio."  he seems to be just as nice in person as the character he plays on the show. 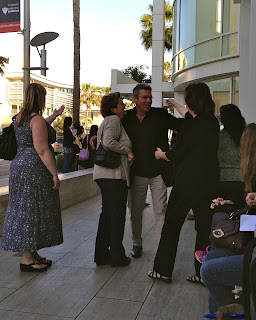 another current cast member, marc anthony samuel ("felix dubois"), scurried past us and headed inside. 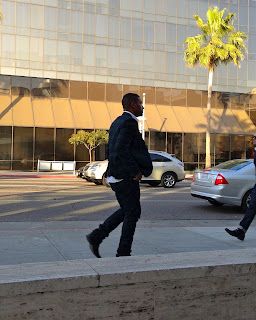 finally, we were allowed to enter the building to check in and pick up our tickets. 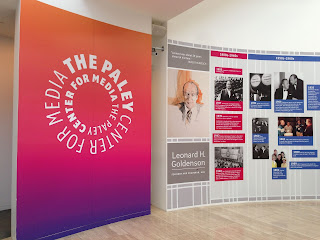 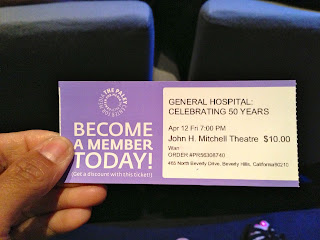 just off to the right was a room where the actors were arriving for the panel.  we were ushered past pretty quickly and i didn't get to see anyone, but the teen reported that she'd caught a glimpse of several people she recognized. 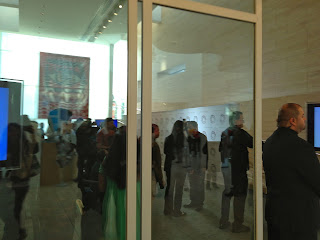 the theater was small, so it was already pretty crowded.  i wished i'd known that as a paley center member, we could've been seated in the first five rows.  poop.  we ended up finding seats in the second-to-the-last row, just in front of the cameras that would broadcast the panel online. 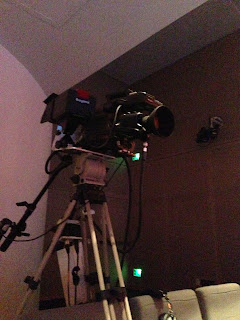 it was fun to watch the cast members who weren't on the actual panel arrive and take a seat.  i wasn't quick enough on the draw and only got these super fuzzy shots, but this is chad duell ("michael corinthos") and sean blakemore ("shawn butler"), plus teresa castillo ("sabrina santiago"). 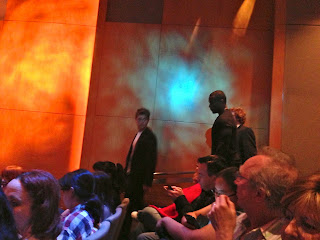 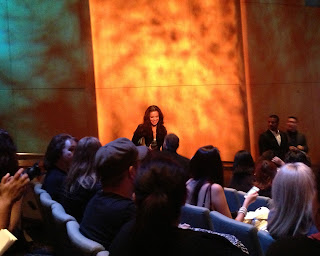 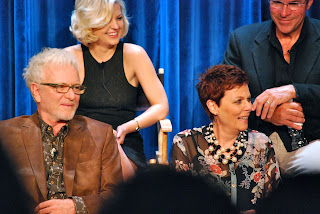 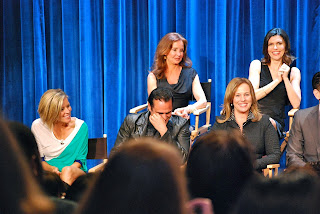 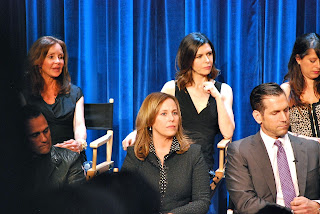 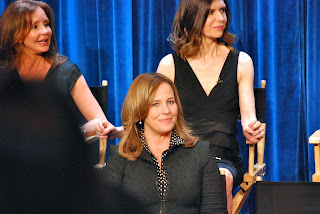 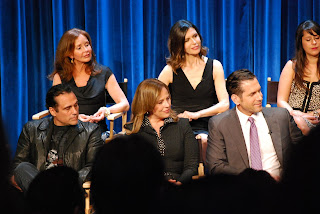 it was fun to hear them talk about life on the set, their personal thoughts on some of the storylines that they'd portrayed, and giggle over inside jokes like code names that the writers used in the scripts that would keep major plot lines and characters secret.  and it was amusing to watch tony geary's reaction to a fan who asked him and genie francis if they'd kept in touch with elizabeth taylor (who had also been a big fan of the show) after she had a cameo role during the iconic "luke and laura" wedding.  because of the milestone anniversary, tony and genie have been doing a lot of interviews and talk show appearances, and this question has come up several times.  while genie didn't really have anything to say ("i'm going to let tony answer that," she said with a smile), tony just gave that "luke" grin and answered as best as he could.  he'd revealed not long ago that he and elizabeth taylor had had a relationship that lasted for a couple of years, something that not many people had been aware of.

all too soon, it was over.  all of the actors gathered on the stage and took a group photo, and sadly this is the best i got: 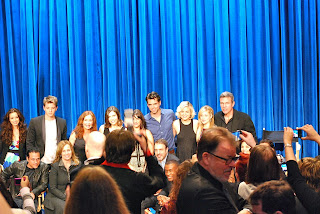 out of that whole group, there were two actors who hung out for as long as they could, chatting with fans, posing for pictures, signing autographs. 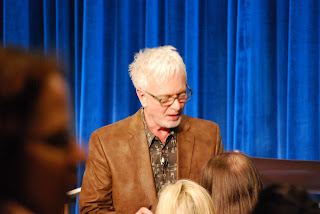 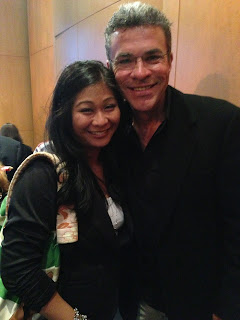 and as we filed out of the theater, we caught a glimpse of a couple more as they were headed out. 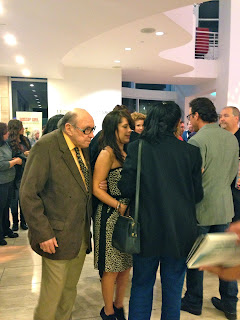 tyler christopher ("nikolas") also has a pretty substantial role on abc family's "the lying game."  the teen and i love that show, and i tried my hardest to get her over there to get a picture with him.  but because this one lady decided that she absolutely had to have a picture with him as she stood on his left and then his right, we lost our chance as he was ushered out by security.  he'd seen us standing there, waiting patiently, and when the lady bellowed "hold on, i gotta get one on this side too," he kind of tossed us a glance that clearly said "i'm sorry, this lady is crazy, and i gotta go."  so this was all we got. 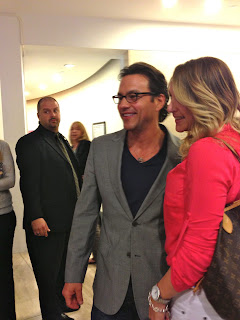 oh, wait.  that isn't the crazy lady, i think this was just before she elbowed her way up towards him.

anyway, we were a little bitter over that one.  he's one of the few people that the teen was actually interested in seeing.  but then as we walked out the door and headed towards the parking garage, we caught a glimpse of teresa castillo and her boyfriend across the street, waiting for the same elevator that we would take to get to our car.  except that we missed out on that chance too, with the stoplight taking for-freaking-ever to turn green.  they disappeared into the elevator, and that was that.

well, sort of.  as we made our way down to the exit, we rolled past a white BMW that was waiting to pay the cashier and get out.  we both turned our heads, realized that it was them, and grinned all hard and waved like crazy people.  the boyfriend looked a little startled, but she broke out into a smile and waved right back at us.  totally made it all better.

doesn't mean we didn't talk trash about that crazy "i gotta get THIS side" lady all the way home, though.  that's just how we roll.
at April 22, 2013