holy mother of poop, i am SUCH a sucker

the teen is kicking butt with her grades so far this year.

so i got my hands on two tickets to the jonas brothers concert in san diego next month. she doesn't know i bought them, but she knows about the show. and when report cards come out in the next week, as long as those grades are as good as they look right now, i'm taking her.


but then yesterday, i get an e-mail alert that they're doing a show at the newly-renovated hollywood palladium. and she happens to be home that weekend.

the hollywood show is general admission only - no seats are assigned. shit. and the doors open at 5, with the show starting at 6. all ages admitted. the teen squealed "OMG, mom, we have to camp out so we can get close to the stage!"

i said "so, would you rather go to the san diego show with good seats, or the hollywood show and camp out?"

i managed to get two tickets (presale is for fan club members only as of now, and we've already retrieved our two allotted passcodes for the year, with only two tickets left to purchase with the second code) just now, and so now it seems that i'll be ebaying my san diego tickets. damn. they were pretty decent seats, too.

holy shit. can you see it? the teen and me, camping out in line on hollywood fucking boulevard. what the hell am i getting myself into? and then a crazed free-for-all once the doors open. 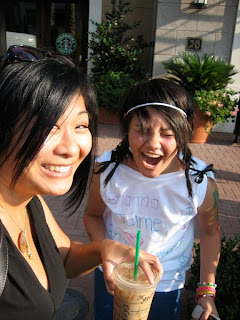