surprise date night was so much fun!

i knew we were due to meet folks at 7-ish. but as the rain poured down and the hub called me at 5:30, frustrated with the traffic on his way home from the office, i wondered if we'd even make it. and we still had to grab dinner somewhere, too. hmm.

he finally burst through the door somewhere after 6, as the ILs and i were playing with the bean and mollydog. after changing his clothes, we kissed the bean goodbye and off we went.

the ILs were going to pick up the hub's gram (i call her g-wan) to have dinner, and to avoid having to shuffle the car seat from one vehicle to another in the rain, we just handed them the keys to my car and called it a night. heh.

shockingly, there wasn't much traffic as we got on the westbound freeway. although this is typical - traffic is usually coming towards us at that hour - people are fucking idiots behind the wheel when it rains in southern california. and as we chatted about what we'd done during the day, i wondered if we could be headed to a laker game. it'd been ages and ages since we'd been to one, and i tried not to get my hopes up. i didn't even know if kobe & co. were in town, let alone playing that night.

so when we got off at the lake avenue offramp in pasadena, i was totally thrown off. what on earth did he have up his sleeve?

as we drove along, the hub said "we still need to grab dinner. you're hungry, right?"

duh. when am i NOT ready to get my grub on?

he shot me an apologetic look. "are you SURE?"

hell yeah, dude! i was hungry, it was pouring rain, and we didn't have a whole lot of time to play around. besides, i can always fuck up a #4 combo - chicken soft tacos, fries, and a drink. heh.

so we hit the drive-thru, picked up some food, and went on our merry way. "nice date night dinner, huh?" the hub chuckled. and i told him that it didn't matter to me - i was already having a good time, and i honestly didn't care that we weren't having a sit-down meal. besides, i still didn't know where we were going! and that was fun.

and then he took a turn, i looked up from my taco, and saw this: 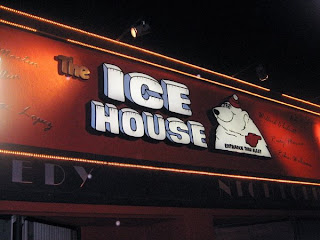 yay! i love comedy clubs, and we hadn't been to one in - oh, i can't even remember. it's been a really long time. and he hadn't ever been to the ice house, but i had - at least once, with my mom years and years ago. in fact, as i thought about it, i had to wonder how in the hell she'd managed to get away with taking me. i had to have been in high school when we went! i told the hub about it, and laughed my ass off as i remembered that i'd had to ask mom what that "two-drink minimum" sign meant. too funny.

i had no idea what the rules were about cameras, so i tried to be totally stealth about the few shots i took. and of course, i had the shitty point-and-shoot, so they're blurry, but they're better than nothing. right?

we met up with some of the hub's CWs and i learned that the tickets were bought for a local boy scout fundraiser. the hub's an eagle scout and he's remained involved, at least on some level.

and as we hung out in the bar, i looked up at the tv and saw those lakers in their "away" uniforms, playing against the celtics. heh.

after we stood around shooting the shit with the group for a while, it was time to take our seats. 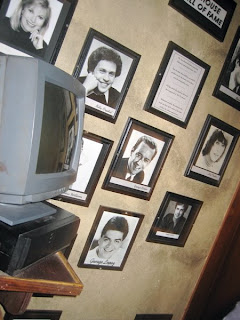 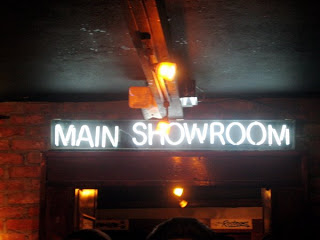 i snapped a quick arm's-length shot when we sat down. we were amused at the destiny's child concert that was playing on the screen - i guess that was our pre-show entertainment? 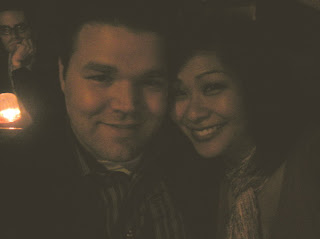 ooh, and i had my first grown-up, alcoholic beverage in i don't know how long. although it was a wussy, foo-foo coffee drink. it had frangelico and bailey's in it, that counts, right? it was yummy and warm. a little TOO warm - with all those bodies in the room, i found myself sweating after a while. of course. ugh.

our warm-up act/host was funny and poked a little fun at the wholesome boy scout group. his first name was sean - and that's all i remember. no, i wasn't buzzed. i just have a sucky short-term memory. 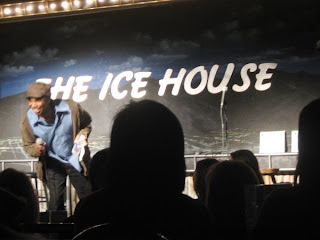 our first comic was jill-michele melean. she's on mad-tv and reno 911 (both of which we are not fans, ha). the hub was a little taken aback when she opened with "so, where are my whores tonight? i'm a dry-humping whore. where are the whores in the crowd? i know you're out there." i laughed my ass off, and after he glanced over at his [super conservative] CWs, he relaxed and laughed along with me. 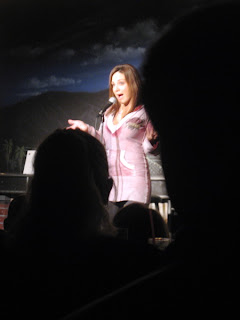 after she was done, she brought out carlos alazraqui - also on reno 911, apparently. homey moved around constantly and i never did get a decent shot of him. oh, well. 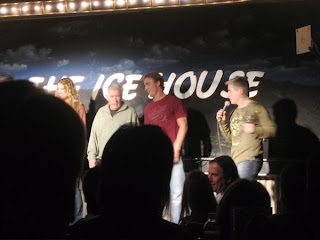 this dude reminded us of matthew mcconnaughey - and we laughed when he announced that that was exactly who he was portraying. and those whores in the crowd shouted for him to take off his shirt - i missed it with my camera - but he complied. hey, he had to do SOMETHING to make up for his utter lack of talent. 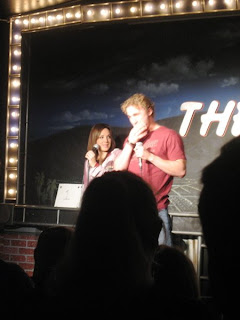 at one point, the hosts asked the audience for ideas of occupations for the contestants. when it was "matthew's" turn, i shouted out "chippendale dancer!" and drew amused stares and giggles from our group. [snort]

there were two grand prize winners, and the hub and i cackled when they were presented: the first received a superman piggy bank and a loaf of weber's bread, the second, a batman piggy bank and a box of frosted flakes. so random, so ridiculously comical.

and then it was over. jill-michele was at the door as we exited, and as i walked by i told her that i'd really enjoyed her performance, and she shook my hand and thanked me. i was so close to whipping out the camera to get a picture with her, but there were others behind us and i didn't want to hold up the line. oh, well.

we were home by 10:30, and walked in to find a hysterical bean and smiling ILs. apparently, she'd fallen asleep during dinner, woke up at home in time to take a bath, and then couldn't get back to sleep. i took her and fed her (i was dying at this point, not having been able to nurse in over four hours), and she passed out after a few minutes. poor thing. obviously, we're gonna need to do date night more often. besides, it's good for us, and the bean's gotta get used to time away from us.