the teen, as you might have guessed, is a member of the official jonas brothers fan club. when we set up the membership, we provided my e-mail address for all communications, since she didn't check hers all that often ("i don't really need to look at it that much, mom, all my friends either text me or i see them at school all the time.").

last week, i received an e-mail announcing that a special sneak preview of the JB's new 3D concert movie was going to be screened, with tickets available by invitation only. each fan club member was allowed to submit for themselves and a guest, plus a parent if they were under 16 or something like that, for a random drawing. and so, of course, i completed an entry for the teen and BFF, hit "send," and promptly forgot all about it. she wasn't home last week, but i knew without a doubt that she would bust a nut at the opportunity.

i told her about it in a text message later that night, and of course she was excited at the prospect of seeing the movie before anyone else, and at the el capitan theater to boot. but i warned her that it was a long shot, just like the meet & greet contests we've entered before. and then i reminded her that i would be more than happy to take her to a midnight showing when the movie premiered to the general public, at the end of the month. she was happy.

but not nearly as happy as when we got home on friday after school and i opened my e-mail. i read it aloud to the teen, who stared at me in shock:

"GET EXCITED, because you and a guest have won a seat at the JONAS BROTHERS 3D MOVIE SECRET SCREENING SUNDAY. FEBRUARY 8TH! We couldn't be more excited to share this experience with some of our biggest JB supporters. Don't forget to show your Jonas Brother love and rock all your best JB gear. You got it, rock it!"

and then the squealing began.

and continued, for a solid five minutes.

it only ended when i reminded her to call BFF and tell her not to make any plans for sunday. she grabbed the phone and this came out, all in a rush:

and then i could hear BFF's squealing from where i sat, five feet away. heh. i mused aloud that perhaps the JBs might make an appearance, but that it was a long shot since the grammys were the same night, across town at the staples center. they were nominated for best new artist, so i thought there was a chance, albeit a slim one.


so yesterday, we hopped in the car, picked up BFF, and headed to hollywood. on our way, we passed the pantages theater, where the teen and i'll be headed in may to see dirty dancing on stage. 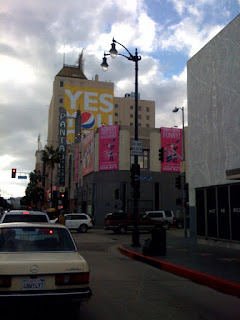 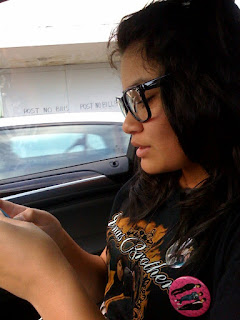 as we drove past the theater in search of parking, i was a little surprised to note that there weren't hordes of excited fans standing in line outside. i turned into the parking structure for hollywood & highland, just across the street, found parking easily, and then we headed out.

when we got to the el capitan and made our way to the entrance, the security guards directed us to the alley just down the way to join the line. that explained the lack of folks out front, and i was a little concerned about what we would find when we got there. 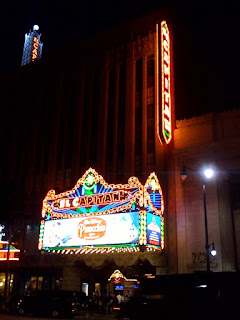 but my worries were unfounded, as we got in the line of maaaaaybe a hundred other lucky winners. we stood there for probably an hour, with the girls excited and me freezing my ass off, and then when a couple of cameramen came by, the screaming began. they panned over the line, with the crowd cheering and chanting "jonas! jonas! jonas!" and amazingly, my outgoing, attention-whoring teen and BFF hunched their shoulders and avoided the camera when it came near them. ugh! the teen even tried to cover up to hide her JB paraphernalia, although the lady who was working with the cameramen pointed and smiled and called out "i see you over there, you can't hide!"

i told her "i don't get the camera shyness. they're HUGE fans and saw the jonas brothers in concert SEVEN times last year!"

her eyes got as big as salad plates at this tidbit. "oh my goodness! you ARE big fans! i'll find you later," and she winked at them.

i thought the teen was going to shank me with those dagger eyes.

the e-mail i'd received also said that no cameras or cell phones with cameras were going to be allowed inside, and so i hid my iPhone inside my wallet. heh. the teen stuck hers down her shirt, and BFF left her phone in the car. and as the line finally moved and we got to the entrance, we saw that they weren't fucking around with that - they were taking cameras and holding them until after the movie was over. damn. and so i didn't take a lot of pictures - i didn't want to have to check my phone in. eff that noise.

after we found seats, i went and got some snacks and drinks, and when i returned, the girls were sitting next to a couple of ladies who were munching popcorn out of special JB-adorned buckets. i hadn't seen them at the concession stand, so i poked the teen and told her to ask them where they'd gotten them - i would've headed back to buy them for the girls, who i knew would totally want one. 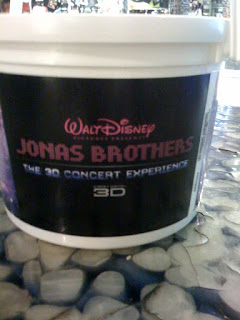 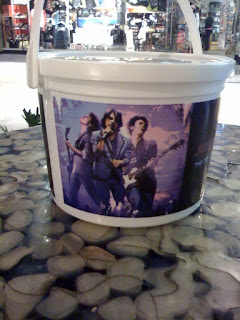 "oh, we're media," they said. "they just gave these to us." and then one of them eyed the girls, decked out in their jonas gear, and said "but if you'd like, we can give them to you when we're all done."

the girls happily accepted, and i thanked them - that was nice. as i settled into my seat and dug into my own popcorn, i noticed sam rubin, ktla's entertainment reporter, sitting in front of us with two little girls. and that was the extent of our "celeb" sightings for the day. oh, well.

the movie itself was a JB fan's wet dream - tons of concert footage, a peek into the brothers' lives during the day and backstage, with most of it set in new york city. i thought it was interesting that the movie seemed to be set completely in NYC, even though we knew that the concert footage was all shot at the honda center in anaheim - at two of the shows we'd seen last summer. anyway, it was fun to watch in 3D, and the sound was so clear that it really did feel like we were at the concert all over again.

afterwards, the girls posed in front of the movie ads (passing ushers were heard snickering as i snapped this, but we didn't give a shit): 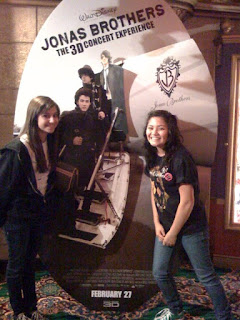 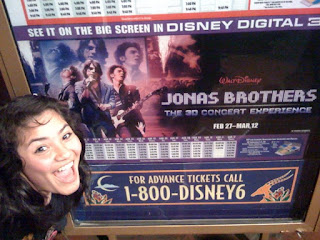 ignored the request to return the 3D glasses: 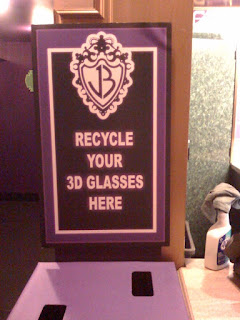 and then we headed back across the street to pick up a couple of cream puffs before heading home. 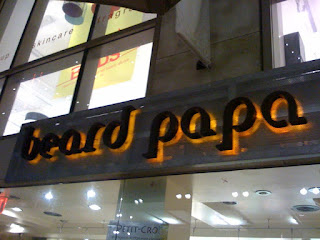 i got my parking ticket validated, we found our way back to the car, and i paid my whopping $2 for parking. woo-hoo! 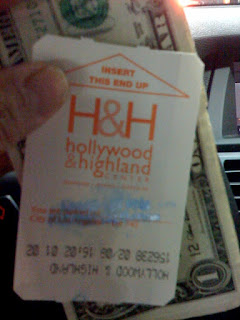