for the last couple of months, i've been driving by this sign: 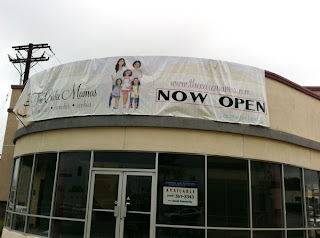 the cake mamas is the first cupcakery to come to my little corner of BFE, and despite the fact that pretty much nothing can compare to my beloved dots, my curiosity was piqued.  so when the "now open" sign finally went up, i decided to go in and check it out.

except that it was after work - which meant i was wearing my dots cupcakes t-shirt.  hmmm.  i debated between going in as a local blogger interested in trying something new in the area (which wasn't a lie) and just sashaying in and playfully claiming to be there to "check out the competition." 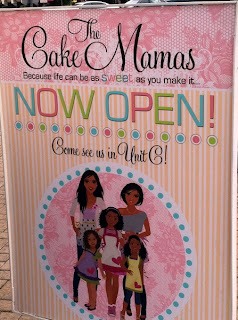 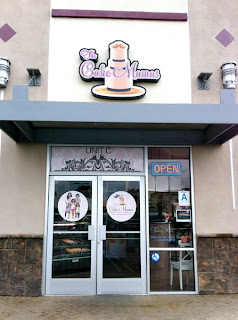 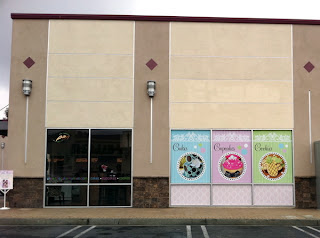 but then i realized that if i went in there as the latter and wanted to take pictures, they might see it as trying to steal ideas or something.  even though dots is pretty creative on their own and doesn't really need any help in that department, i could see that as being kind of not so cool.  so i zipped up my jacket and strode in (cake mamas, if you're reading this, i'm sorry!).

the first thing i saw was the cupcake case. 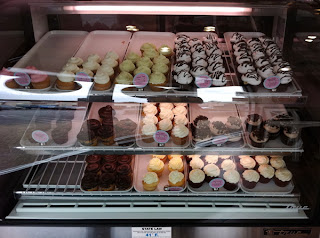 and behind it, a giant, colorful poster displaying photos of their creative specialty cakes. 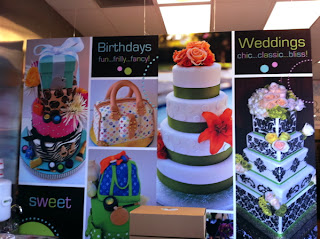 i chatted a bit with the girl behind the counter and learned that they'd just opened on october first.  she pointed to the signs behind her that gave all of their flavor and pricing information: 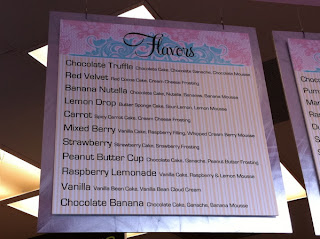 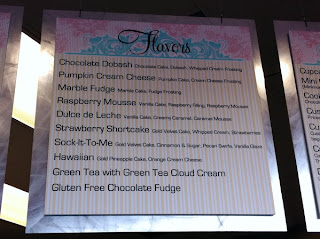 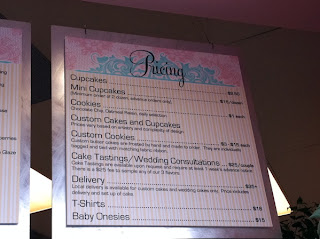 they had a few flavors similar to dots' menu, but quite a few different choices too.  although like dots, they only prepare a handful of flavors daily and rotate them throughout the week.  because i always try red velvet at a new place, i chose that and a chocolate truffle cupcake to take home. 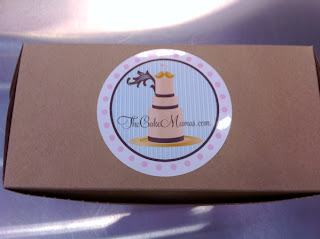 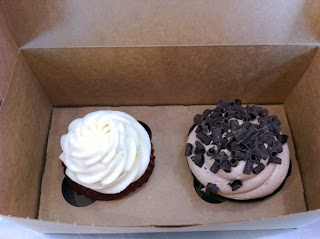 i thought the little holder inside the box was cool, but kind of a waste of space.  especially since it didn't really help - once i got home, both cupcakes were flipped onto their sides.  and i'd been really careful with the box, too.

anyway, i checked out the rest of the shop.  it's bigger than the dots i work in, but rather comparable with the shop we have in old town pasadena.  plus, in addition to specialty cakes, they do daily cookies and also offer custom-made ones as well. 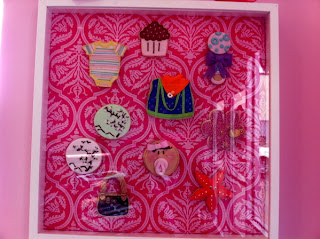 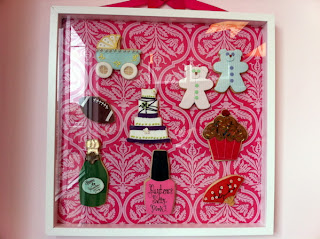 they sell tubs of tinted frosting and lots of t-shirts. 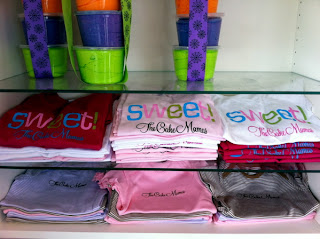 it was a cute shop, and i hope they survive.  i think they'd be better served in the space in front, with visibility from the busy street, but i'm thinking the rent was probably higher.  still, it might have been a gamble that paid off.

i shared the chocolate truffle cupcake with the bean as her special surprise for the day.  yeah, so i bribe my kid to take her nap by dangling a treat in front of her.  so what? 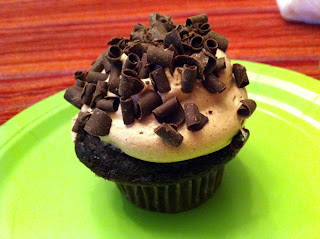 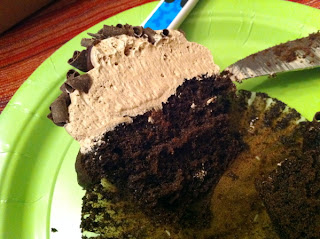 okay, so my official review (which is actually the very same as MIL's, who sampled the red velvet):  the cake is a bit on the dry side.  the frosting, piled high atop the cake, is creamy and almost mousse-like.  not bad, just different.  overall, i'd say their cupcakes are a'ight.  even though some might call me biased, i would still make the drive out to pasadena for the treats i love so much.  these'll do in a pinch, but at the same time, if i really need cupcakes and don't feel like making the trek - well, let's just say i've watched and learned quite a bit in the few months i've been at my super fun job.  heh.
at October 22, 2010