so remember how the poor bean was subjected to her 3-year checkup ON her birthday?  not only did she have to go to the dreaded doctor's office, but she had to endure a shot and a TB test - two separate needles.  poor baby.  but it was all for a good cause - she left the office with a completed form in hand from the doctor to submit for preschool enrollment.

and yesterday was the big day.  i'd been putting it off for ages, with the hub on my ass to get her going and me just not wanting to face the fact that my baby is old enough to go to preschool.  but i finally had to give in - i knew it was a good thing for her, not to mention that it would give MIL a nice break in the mornings.  we enrolled her into the half-day session, so she's there from 8:30 to 11:30.

so we just hyped it up for her ("wow, you're such a big girl, are you excited to go to school?" and she'd answer "yeah!  you're gonna go wif me, wight?" oy) and tried to get her amped up to play with new friends and learn songs and all sorts of fun stuff like that.  and i just prayed that i wouldn't cry in front of her.  heh.  i was really torn between taking her and just letting the hub handle it, thinking maybe it would be easier on both of us if i weren't there.  but after polling my twirlfriends, and realizing that if i didn't go to drop her off for her first day of preschool i'd regret it later, i decided to suck it up and do it.  when the hub suggested that we both go (duh, geez), i jumped right on it.  i don't know why i didn't just think of that to begin with.  see, that's how nutso i was over the whole thing.

she was still drowsy when we got her up to have some breakfast and get ready for the day, but she lit up when she saw the "eggs with the cheese stuck on it": 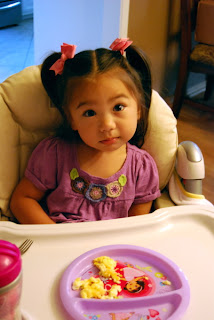 i put her ziploc bag with her change of clothes inside (labeled with her name, so it wouldn't get mixed up with other kids' stuff), and stuck it in her backpack.  she was pretty excited to rock it. 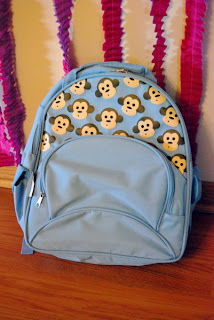 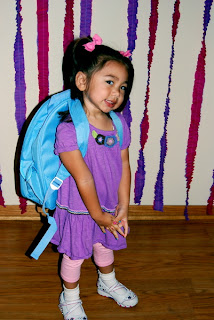 it was a quick ride to school, and she demanded that she get to wear the backpack again as we walked her to the door. 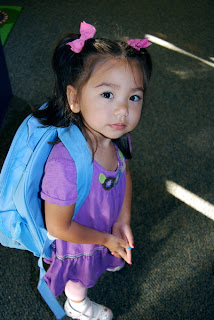 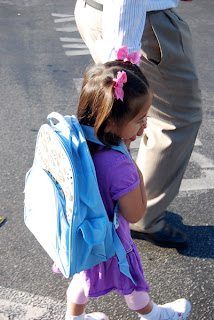 we were greeted warmly by the staff, who showed her where the cubby was for her backpack. 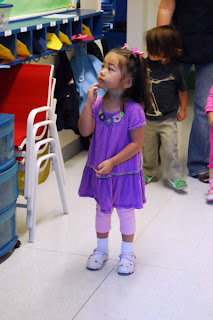 as luck would have it, a "grocery store" was set up outside for the kids to do some shopping and act as cashier.  she got right up in the mix, grabbed a cart, and started browsing the shelves. 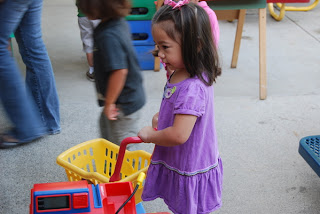 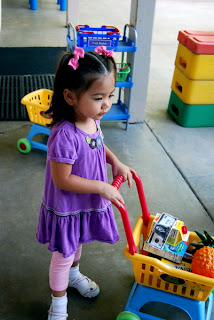 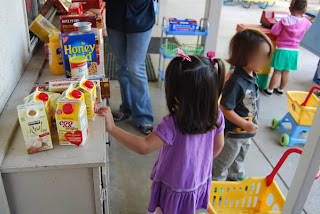 the parent handbook told us that the sneaking-out method was discouraged, so that the kids got a chance to say goodbye to their parents.  and i realized that was a much nicer way to handle it, so that we could get a hug and kiss (despite my fear of seeing and hearing her cry as we left).  so after a few minutes, we approached her and told her we were going to go to work and that grandma would be back to pick her up.  and she took it like a pro - she gave us kisses and didn't make a single peep of protest.  we went back into the building and peeked at her through the window to make sure she was okay, and she just turned back to the fun stuff and started chatting with the nearest toddler.

and then i was super duper proud of myself for not crying!  you know what a sap i am.  i'd even grabbed a hand towel on my way out the door, in anticipation of some serious waterworks on my part.

of course, once i was on the freeway and started thinking about what a big step she'd just taken, it hit me.  the tears welled up, my vision blurred slightly, and i totally started crying right there in the middle of rush-hour traffic.  oy vey.  i reached for my towel - emblazoned with a big ass minnie mouse design - and dabbed away, hoping my mascara wasn't running all down my face.  i got a few strange looks from other drivers, but i didn't care.  my baby's a preschooler!

i thought about her all morning long as i worked, and tried to keep myself distracted with various tasks around the shop.  i counted down the hours in my head and sent her "stay strong, baby" vibes.  and as soon as the clock struck 1:30, i clocked out and picked up my phone to check for updates.

sure enough, a text from the hub read "she didn't cry!"

and then i was relieved all over again.  wow - she's such a rock star!  although i guess what actually happened was that she did a great job all morning, participated in all the activities and stuff, and then when they went in for the last potty break, the teacher put on rubber gloves.

it didn't last long, and MIL came right on time to pick her up and explained to the staff why she'd cried.  the teacher whipped those gloves right off and thanked her for filling her in.

later, as i asked her how she liked school and what her favorite part was, the first thing out of her mouth was "i didn't like the gloves at school."

but really - i feel like the biggest, gigantic-est burden has been lifted off now that the hurdle of the first day is behind us.  she said she had fun and wanted to go back (good, because she is - 3 days a week), and we're just so proud of her.

my baby's a preschooler! 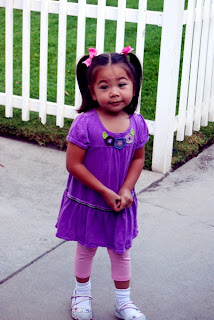 Email ThisBlogThis!Share to TwitterShare to FacebookShare to Pinterest
Labels: the bean goes to school