today's post is brought to you by the letter...uh, A.

so i'm in the middle of making the teen's pettiskirt to match her sister's, so they can wear them for part of our upcoming family photo shoot.  i'd originally meant to have it done in time for the bean's party, but i ran out of time.  luckily, i managed to salvage the idea by proposing some super cute sister pictures during the shoot.  i can't wait - with the background i'm envisioning, they're going to be EPIC.

i also got all of the thank-you notes out.  actually, they've been out for over a week, but i've had other things to blab about here.  heh.  anyway, here's an example of what they looked like: 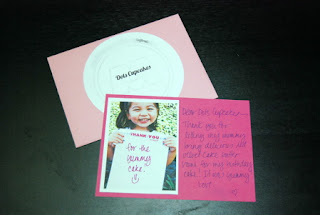 i've already heard from a number of folks who've received theirs, and i'm all tickled that they went over so well.

something else i'd meant to have done before the party was to recreate part of the decor in the bean's room from the last bedroom she had - wall letters spelling her name out.  the ones we'd used before were from paper source, just cardboard letters that we'd spray-painted pink.  we'd just used some double-stick tape to adhere them to the wall, so when we removed them they ended up in pieces.  oh, well.  i wanted to get some nicer ones for this time around - maybe some wooden ones i'd seen in pottery barn kids.  but then i came across a tutorial on one of my favorite crafty/sew-y blogs for wall letters made with felt, and decided that they'd look really cute.

i wanted to use the good stuff - wool felt instead of the cheesy poly-blend crap - but my local joann's only had super boring, ugly colors.  meh.  and then i found the stacks of felt in all sorts of fun colors - 4 sheets for $1.  well, shit.  i couldn't pass that up!  i added some contrasting embroidery floss and managed to skedaddle outta there after ponying up less than $5.  that was a first.

after scouring dafont.com for a fun font to use, i finally picked one.  i printed all of the letters in the bean's name (no, they won't actually spell out "the bean," sillies), enlarged to about 400-pt font.  i traced them onto the felt and cut two of each letter. 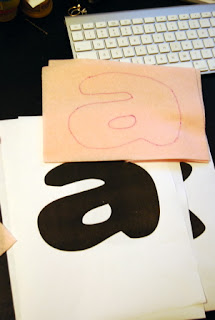 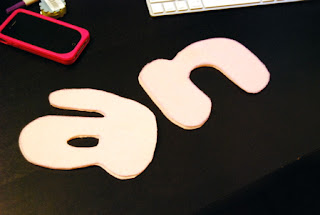 i used a whipstitch for the edges of each letter, left an opening, and then poked fiberfill stuffing inside.  i sewed the opening shut, tied a knot, and admired my handiwork.  not perfect by a long shot, but supposedly that adds to the homemade "charm."  whatever.  i'm happy with them (although i'm not completely done yet, slacker). 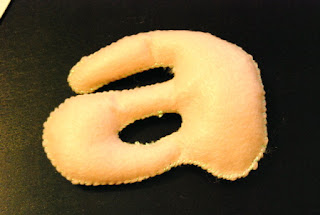 hopefully they'll look cute when they're all finished and hanging on the wall.
at October 28, 2010

Email ThisBlogThis!Share to TwitterShare to FacebookShare to Pinterest
Labels: major craft nerd, thank you notes are not that difficult