okay, so yes - i used to think macarons were less than delicious.  i'd tried the ones at jin patisserie - colorful and perfect, but didn't really do much for me - and maybe one or two other places, and i didn't really get it.  i knew a lot of my buddies loved 'em, like weezermonkey and nanette, but i didn't necessarily share their sentiment.

but then a few months ago, i wandered into europane for a meeting with a client.  and in their display case was a stack of pretty macarons in one of my most favoritest flavors - salted caramel.  and so of course i had to give it another shot.

i loved it.  i ate two, and vowed to return for more some day, but never did.

i don't remember what got me started on reading blogs about making these temperamental, delicate little treats, but i found myself reading posts that described the process.  the cookie (shell?) itself is really basic - almost like a meringue.  most recipes had about three main ingredients:  egg whites, aged at least 24 hours (which means you separate the eggs and then let them sit in the fridge), almond meal, and sugar.  i found that powdered food coloring, which i had in the pantry but found useless for most other things, were the best way to tint the batter.  then i learned about the difficulty of creating the "feet" - the lacy, bubbly-looking bottom edges of each shell.

from then on, i was obsessed with the idea of making my own.  a few of my friends (lilcee, tater, and winnie) have all made them.  i asked my co-worker, rock-ell2, for tips (she's a graduate of the same le cordon bleu school that brother wan attended, but she opted for the pastry chef program), and i was feeling pretty confident in my baking skills.  the only thing holding me back was the the weather.  it's been drizzly and overcast around here for the last few days, and for many forms of baking, humidity is the devil.  but my cockiness took over and i trotted into the kitchen to give it a shot.  i thought, well, hell - how hard could it really be?

i decided to use a recipe i'd found for basic macarons filled with homemade salted caramel.  it looked easy enough, and didn't even require a kitchen scale (although i bought one anyway).  the sugar and corn syrup looked really weird in the pan, but it turned out exactly as it was meant to: 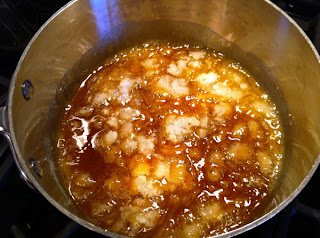 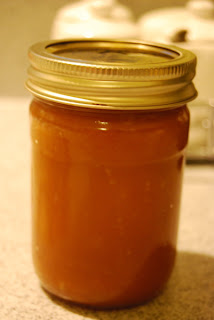 next, i pulled out my old reliable kitchenaid stand mixer.  it was good to see her again - it'd been too long.  i poured my aged egg whites in and started 'er up. 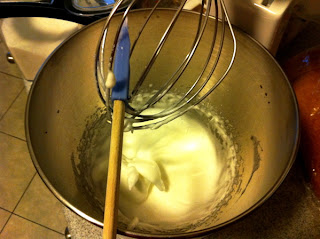 folding in the almond meal (blended with confectioners' sugar) was a little daunting.  i was afraid to overmix, especially since i realized i'd forgotten to add my food coloring (pink, of course) and had to stir it even more. 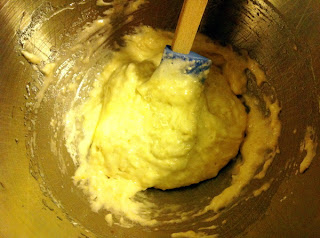 after i popped them in the oven for five minutes (set at 200, per tartelette's instructions) and pulled the pan out to let the oven's temperature rise to 375, that cockiness started to deflate a little.  how on earth were these flat little pancake-y looking things going to end up like pretty french macarons? 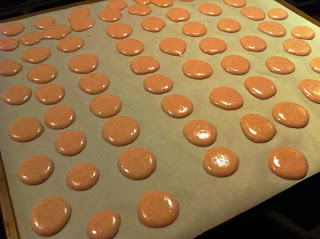 when i hesitantly touched the top of one, though, it was smooth and not sticky, just as the recipes said they should be.  a little confidence returned as i popped them back into the oven and prayed for smooth tops and pretty little "feet."

7.5 minutes later, i peeked in the oven, let out a squeal, and pulled these out: 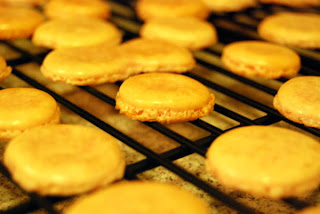 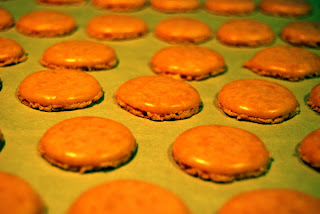 look at the feet!  woo-hoo!  they weren't perfect by any stretch of the imagination, but the majority of them were shaped fairly well and all were rocking the bubbly, lacy feet.  YES!

i let them cool completely, peeled them off of the parchment paper, and sandwiched some of that delicious salted caramel between pairs of similarly sized and shaped shells. 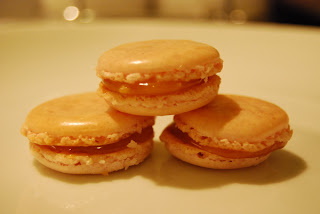 i decided to put myself out of my misery and sampled one. 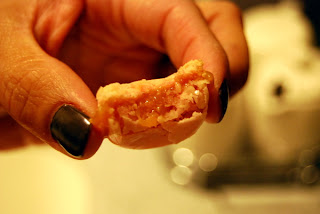 the flavor is fantastic.  the salted caramel has a great balance of sweet and salty, and the shells are delicate, nutty, chewy.  not too bad for a first try, oui?
at October 19, 2010