more fun than dressing in layers

i'm still on the macaron kick, after my first successful attempt a couple of days ago.  while i still have a few of the salted caramel ones left, i'm already dreaming about what kind to make next.

since i had some egg yolks just kickin' it in the fridge, having separated them from the whites to make the macaron shells, i decided it was finally time to try making fresh lemon curd.  i'd watched my CW rock-ell2 make it a zillion times and even found a recipe that looked pretty close to how she made it for our lemon drop cupcakes at work.  after confirming that the ingredients were the same (just a whole lot less, since i didn't need to make an entire tub of the stuff), i bought a bag o'lemons and got to work.  it's such a simple recipe with few ingredients:  egg yolks, lemon juice, sugar, butter. 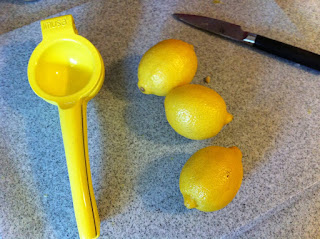 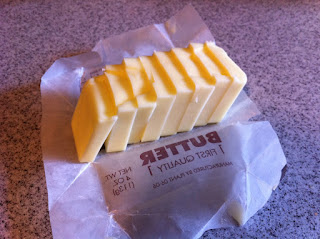 there was one hiccup - the metal bowl i'd stopped at target to buy was an awkward size.  it was supposed to fit inside my saucepan, but with enough room at the bottom to allow space between it and the simmering water below.  like a double boiler, ghetto-style.  you know how i roll.  but this one, while the right diameter, was too deep.  boo.  i tried putting a measuring cup in there to set the bowl on top of, and then a little silicone pinch bowl, but there was a gap between the pan and the bowl that allowed too much of the heat to escape.

after whisking the mixture for over ten minutes (when it was only supposed to take eight), i gave up and just allowed the bowl to sit in the water.  with the heat properly trapped, cooking the mixture slowly while i whisked the shit out of it continuously, it finally thickened up properly.  i took it out, added the butter bit by bit, and then covered the surface with some plastic wrap. 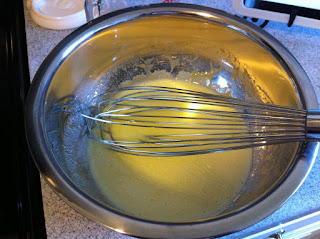 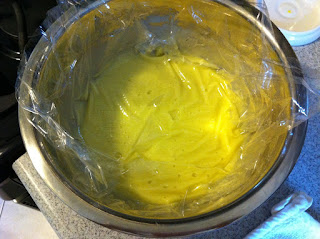 after it had chilled for a while in the fridge, i took it out to see if it had thickened the way it was supposed to.  thank goodness, it did.  i scraped it into a smaller container so it wouldn't take up so much precious refrigerator space. 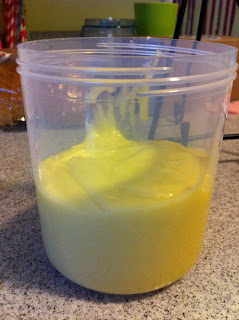 i had a few leftover macaron shells (the bean liked to eat them plain), so i pulled a couple of them out and smeared a little lemon curd on.  tartelette's blog has a fabulous-looking lemon meringue macaron, where she mixes in some lemon zest in with the macaron batter and then sandwiches a dollop of lemon curd and a bit of swiss meringue between two shells.  i thought this sounded ab-fab, so i think we know what i'll be doing with some of this lemon curd in the near future... 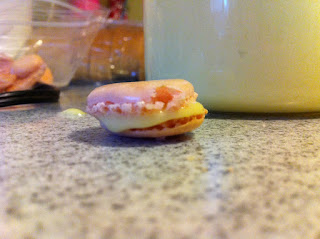 the tester was really delicious, by the way.  those are going to be some spectacular macarons.  and i'll never buy lemon curd in a jar ever again.  too easy to make, and aren't things so much more satisfying when you make them yourself?  at least, i think so.

i also busted out some brownie mix a couple of nights ago, and followed the recipe on the box for a sweet & salty variation.  you just make the brownies like normal, but when you take them out of the oven you drizzle some melted caramel on top and follow it up with a few handfuls of crushed pretzels. 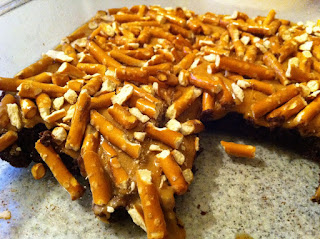 i'm getting a nice head start on my extra fat layer for winter warmth, don'tcha think?
at October 21, 2010