when i was reading up on macaron making, i learned that there are at least two ways to make them - the french version, which i tried last week, and an italian meringue.  the latter is said to be more reliable, but more of a pain in the ass as it entails beating some boiling sugar syrup into the egg whites.  actually, i also learned that there's yet another type of macaron - a swiss-made confection called "luxembergerli."  these are supposedly super delicious, lighter in texture than both the french and italian style macarons, but whose recipe is top secret.  i'm going to have to resign myself to likely never trying these, but that's okay.  and why?

well, because i've become a pretty darn big fan of my own homemade macarons, thankyouverymuch.  but i was curious about how foolproof that italian recipe really was.  and you know me - once i get that bug up my butt, i don't stop thinking about it till i just do it.

so, following the instructions on this blog, i set out to give it a shot.  first, i put my almond meal and confectioners' sugar in the food processor and gave it a whirl (did i tell you that my boss gave me a mini cuisinart food processor that she wasn't using anymore? now i have a real one and not just the baby food maker!).  and then i remembered to add some powdered food coloring in - this time, the teen chose blue. 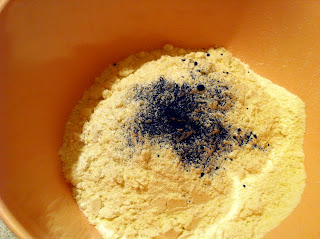 i boiled the sugar and water into syrup (that candy thermometer sure comes in handy!) till it was a toasty 230 degrees per the instructions, and poured it into the egg whites as they whipped up in my kitchenaid.  about 10 minutes later, the whole concoction had cooled completely and was all glossy and pretty.  all that "extra work" that other blogs had complained about was done by the mixer, with me reading a story to the bean while it whipped that meringue into oblivion. 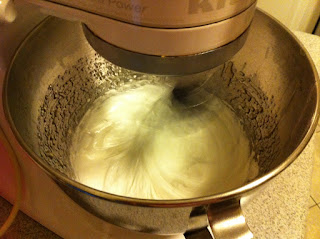 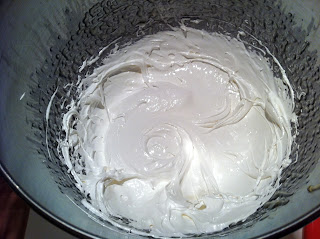 next, i mixed the rest of the egg whites in with the dry mixture. 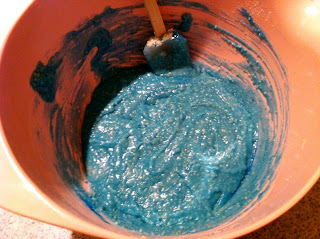 i folded it carefully into the meringue and scraped it into a pastry bag.  but i had more batter than room in my bag, so i put the rest into a ziploc bag and created a ghetto-fab cheapy substitute.  i thought i'd try slightly bigger shells this time, so i piped them to about 2.5".

of course, my ziploc bag sucked ass and the batter came out in big, ugly blobs.  i looked at them for a while before giving up and scraping the batter into another disposable pastry bag and starting over. 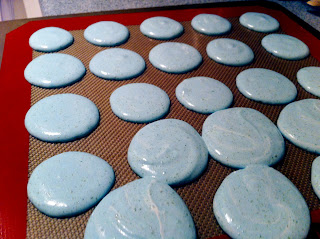 but damn - i still managed to screw 'em up.  obviously, my piping skills need more polishing.  i wasn't about to re-do it for a third time, though.  it was my first try at these anyway, and they were just going in my belly (and whoever else wanted to try them) - so presentation wasn't necessarily key.  i popped the pan into my oven and hoped for the best.  after about 6 minutes of baking time, i peeked cautiously into the oven and found that this "foolproof" recipe was exactly that.  look, feet! 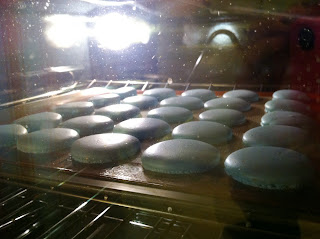 i think i left that first pan in a little too long - the shells were firmer than i expected, and when i peeled them off of the silpat, the bottoms were ever-so-slightly brown.  and some of the shells had kind of exploded at the bottom.  oops. 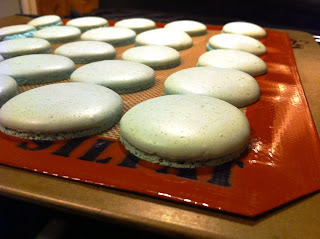 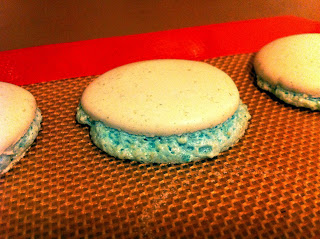 the second pan was truly a piping disaster. 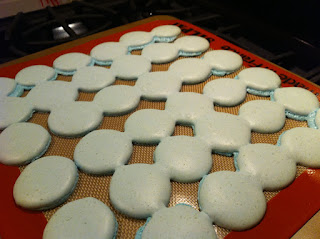 but then brother wan, who was over for dinner that evening, popped one in his mouth and said it was still nice and chewy.  i always feel better when i get his opinion, since he's a pro and all.

i sandwiched some of my beautiful, fresh lemon curd between two shells and took a bite. 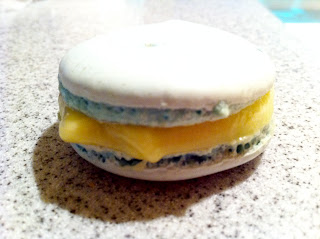 let's just say that i'm currently addicted to my own macarons, and am quite partial to this italian method.  yeah, it's a little more work, but oh-so-worth-it.  mmmmmmm.
at October 26, 2010