with about a third of a gallon of reduced-fat milk to get rid of (i bought it for FIL, who gets grossed out by skim milk), i figured the best way to handle it was to make a batch of smitten kitchen's almond-vanilla rice pudding.  you'd have come to the same conclusion, right? 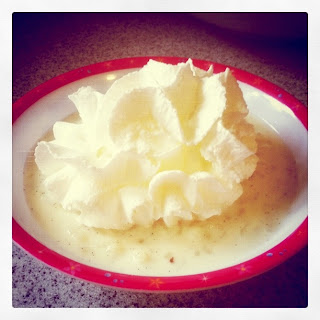 the bean, who was sickypoo with a fever yesterday, came over to inspect what i was having for breakfast (yeah, that's right).  "mommy, what are you eating in my bowl?"

and while she didn't exactly love the pudding itself, she sure had no problems helping me out with the whipped cream.  heh.

later, as she was obviously feeling better - bright-eyed, cheerful, dancing around like always - i dug out something to make for dinner.  we've had a package of lobster claws in the freezer for a while now, and since i never get to that darn lobsta truck anymore, i decided to make my own version.

but we had no rolls in the house, and i didn't want to have to cart the bean out to the grocery store for just one thing.  so i found a recipe and made my own. 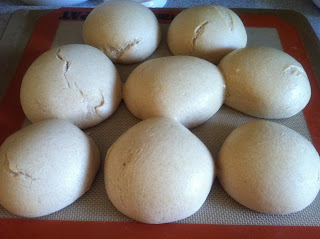 yes, i know - they look like boobs.  but they were soft and yummy and a little bit sweet, and i tried to make them somewhat healthy by replacing half the flour with whole wheat.  i warmed up the lobster meat that i pulled out of those claws in a pan of melted butter.  lobster rolls are typically served with mayonnaise, but the hub hates the stuff.  he was pretty pleased with what was on the plate (as was i): 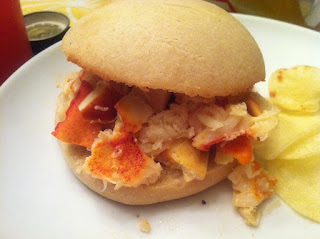 not your traditional lobster roll, but who cares?  it was yummy.  we ate them with potato chips and onion dip, and now i have one less thing cluttering up my freeezer!  total win-win.
at July 14, 2011