just a building next to a grassy knoll

when the teen found out that we were going to visit the ILs in dallas, her first request was for us to visit the spot where the 35th POTUS had been assassinated (this being even more interesting than the idea of being in the birthplace of her beloved nick jonas).  morbid, perhaps.  but like her mother, she's been captivated by the idea of american royalty that was the kennedy family ever since she learned about it in school.  to us, that magical era that was camelot was rather enchanting, which made the tragic ending of it all the more sorrowful.

we were more than halfway through our visit by the time we finally got around to dragging my poor MIL down to downtown dallas for the museum housed in the former texas school book depository.  i knew she'd been there before and wasn't particularly impressed by it, but because she is a saint, she happily took us to check it out. 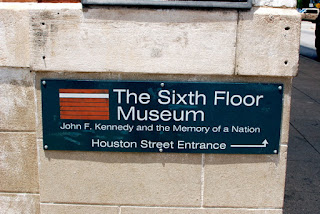 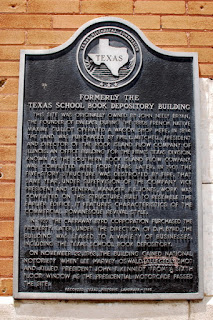 there was a strict "no photography" rule.  although i thought i could get around it with my phone, the security guards sprinkled throughout the museum looked imposing enough to keep me from trying.  the exhibit consisted of mostly pictures, video, and a few carefully preserved artifacts anyway, so you're not really missing much.  and i'm sure you've seen that zapruder home video about a bazillion times anyway.

the window that oswald shot his rifle out of had been restored to look exactly as it had on that fateful day in november 1963, and the entire scene was enclosed in glass to keep it pristine.  maybe it's because i'm a sappy fool, but i was sad and a little teary as i looked at that window, listened to the audio tour, watched videos and looked at the rest of the exhibit.  the teen was a little ways ahead of me, but my guess is that she felt the same way.

like other museumgoers were doing, we went outside after our tour and checked out the grassy knoll. 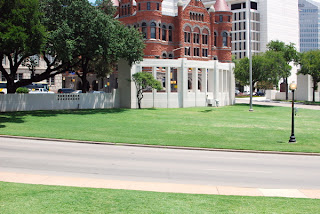 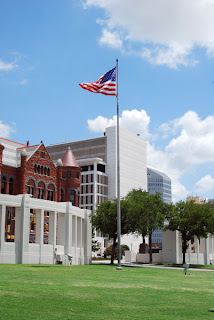 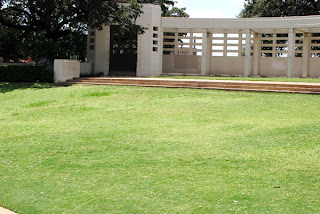 see that open window, second from the top and on the right?  if you don't buy into any of those conspiracy theories that are still being debated almost 50 years later, that's where the shots rang out. 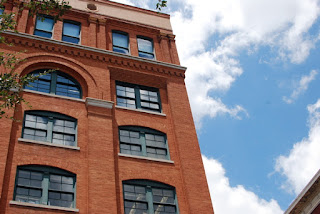 it was rather surreal to be standing in the same area that we'd seen so many times on video and in history class and such.  and as we'd been told, there were two Xs painted in the street where the president had been shot.  i waited for traffic to clear before i scurried out to take pictures of them and the view of the book depository building from each one.  it was so bizarre to stand there and reflect upon what had happened in those very spots. 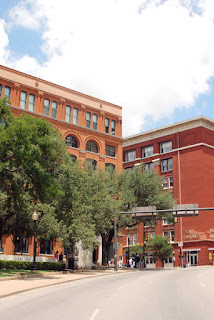 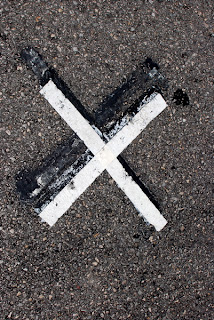 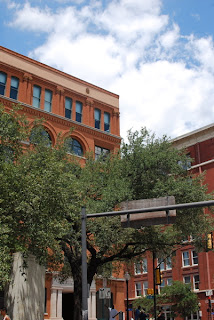 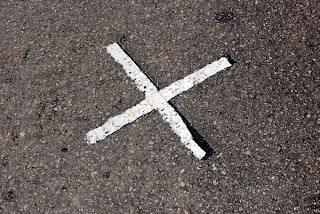 we rejoined MIL and the bean, who were cooling off in the air-conditioned car, and decided to drive around the corner to the john f. kennedy memorial plaza.  i'd already read that it wasn't really something that necessarily required a stop, but at least we could see it as we drove slowly by.  luckily, there wasn't much traffic and we could get a good look at it without having to rush.  first, a last look at the street where the assassination had taken place: 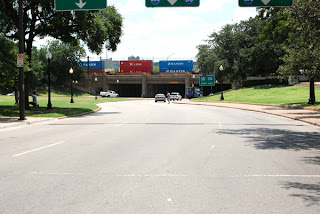 and then the memorial - originally dedicated in 1970 and then restored in time for its 30th anniversary.  according to the website, it's designed as an open tomb - four walls with no ceiling, to symbolize the freedom of JFK's spirit.  inside, there's a slab of granite with his full name carved and painted gold. 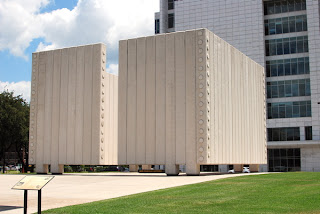 on our way back to the freeway (highway?  turnpike?  i was never sure what to call it), we passed reunion tower, where FIL had taken MIL for her birthday dinner last month. 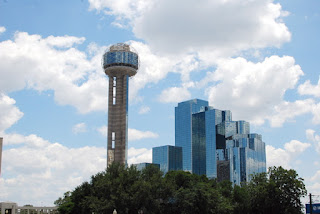 while it wasn't what you could really call "fun," we really appreciated the opportunity to visit a site as historic as this.  we didn't take any pictures of ourselves, because well - it really wouldn't be super appropriate to smile, now would it?  but it was fantastic education-wise, and we were impressed with all the knowledge that rock-ell managed to soak in during our short visit.  she takes a crapload of teasing from us over her sporadic bouts of slight ditziness (love you, r!), so it was good to see that she'd really paid attention and learned some shit.  like me, the teen really gets a good appreciation of history when she gets to see and touch and hear it all in person, and i think it would be a blast to take the girls to similar sites over future vacations.  if she's home with us for spring break next year and things fall in line in other areas, maybe we can talk the hub into taking us somewhere really cool and historic.