i SWEAR, it was a total coincidence.

see, MIL, sensing a need for some retail therapy (or simply some air conditioning in a place other than the house), took us to her favorite mall.  there is a ton of retail in her neck o'the woods, so there's quite a lot to choose from.  and hey, we weren't complaining about going shopping.

as she and the bean wandered off together, the girls and i ended up browsing through the shoe department at nordie's.  when the teen headed out the door to toss her empty starbucks cup into the nearest trash can, she came back in a tizzy and summoned me out into the horrific heat.  and why?

well, she'd heard some familiar music...and then saw this: 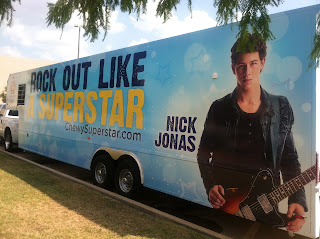 as we took this picture, the people working in the trailer came out and asked if we wanted to take a picture with a faux nick.  we posed in the blaring sun and accepted a little card with a code to retrieve the photo online, which would have nick's image photoshopped in next to us.  cheesy and lame, i know. 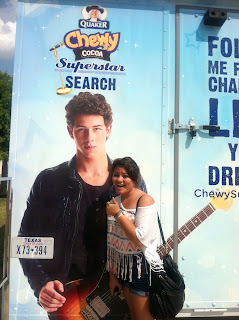 as we headed back to the mall entrance, another employee came by and offered us some free granola bars (nick jonas is working with quaker chewy granola bars on some promo to find "the next superstar").  but the real gift was when she offered up this golden nugget of information:

"he's going to be here tomorrow, you know."  and at our blank looks, she said "nick jonas.  you guys are fans?  he's making two appearances tomorrow with us, at the sam's club and then kroger's."

i thought the teen was going to faint dead away, and not because she (like me) was sweating her ass off in the sun.

then the lady looked around and leaned in conspiratorially.  "between you and me, like, don't facebook it or anything, but make sure you get there early."  and when i told her we weren't locals and didn't know where we needed to be, she told me to check the website for all the details.

and when we finally had a chance to check it out, we learned that the trailer was making stops all across the country over the summer - but nick's only appearances happened to be right there in texas during our trip.  mere minutes from the ILs' home.  the very next morning.  and the first 150 people to arrive at the venue would get into an exclusive meet-and-greet with the young jonas.

with the first appearance about a half hour away (at a sam's club, so random) and MIL more than happy to be our driver, we created our plan of attack.  heh.  and with our body clocks still on california time, we had to drag asses out of bed super early the next morning.  but it paid off, as we arrived about three hours ahead of time and managed to get the green wristbands that gave us access to the precious meet-and-greet. 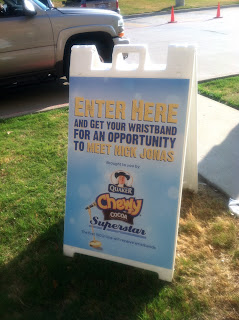 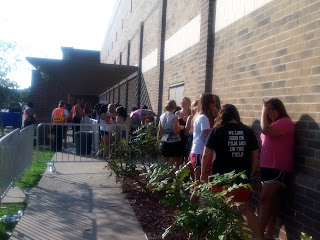 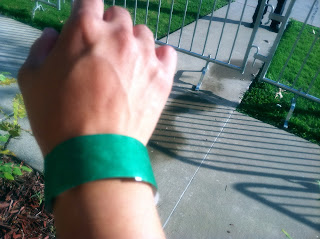 the sam's club employees were rather bemused at the mob of excited teenagers (and more than a few moms), but were really friendly and helpful.  the guy who gave us our wristbands even set aside one for the bean, who'd stayed in the car with MIL.  we were amazed - if this were at home, no way would that happen.  plus, they offered us cold bottles of water and told us that since we had our wristbands, we were free to go inside the store and stay cool instead of stand in the line.  didn't have to tell us twice. 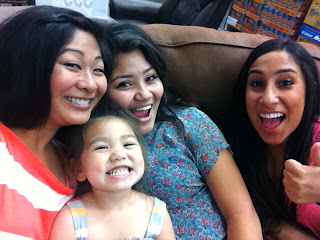 we managed to kill a couple of hours and then found that he'd arrived ahead of schedule.  we got back in line outside - and it took about 2.75 seconds before we were all sweaty and gross.  yuck.  luckily, as we got to the front of the line, we were allowed back inside for long enough to cool back down.  i imagined poor nick having to hug a bunch of sticky chicks.

just like the first time the teen got to meet her man, no personal items were allowed inside.  the event staff took one picture of each fan with him, to be uploaded to their website within a day or two.  the bean and i went together, and he smiled down at her as she approached him with big eyes.  she was speechless, and so i introduced her to him as he shook her hand and greeted her by name.  i totally had stuff i'd thought of saying to him, but i admit it - i was rather like the bean, starstruck like a mofo.  he shook my hand too as he thanked me for coming, we turned and posed for the camera, and that was that.

the teen went next, and i felt her giddiness as she walked on clouds towards him.  they exchanged big grins and a few words, took their picture, and then it was over.  although i watched him as she turned away to accept an autographed photo of him and the little card with the password for the online photo.  his gaze followed her as she walked towards me, and i smirked as that gaze went from her head all the way down her body and back again.

yup, that's right.  nick jonas totally checked the teen out from head to toe.  i told her so in a stage whisper, and she damn near melted into a puddle.  we watched rock-ell (who has zero interest in the brothers jonas, but didn't turn down the chance to meet a celeb) as she got her turn to meet the teen's dreamboat and then we were ushered right outta there. 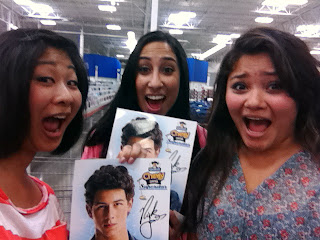 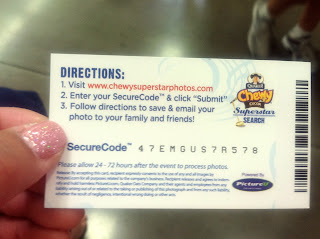 i love how sam's busted out some jonas merchandise and placed it right as you exited the meet-and-greet area.  so strategic. 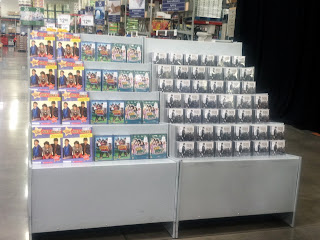 we turned and watched through the open curtain for a while to catch another glimpse (haha at the price tag above where i took this shot), and then we left. 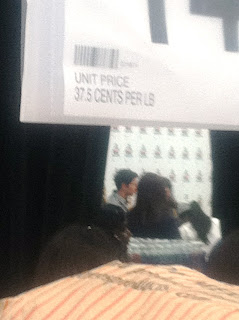 we had enough time to hop in the car and scurry to kroger's, another super random spot designated for his second appearance.  yeah, we sure did. 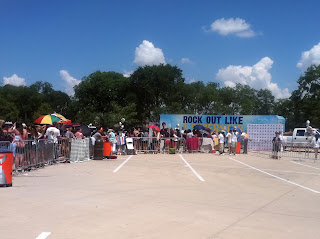 but unlike the highly organized and much more comfortable sam's club, this one was complete chaos.  not to mention, we didn't get there in time to receive a wristband.  we were about 25 people behind the last lucky purple-banded fan, with no guarantee of getting that second chance to say hello.  there were others there with the same green wristband as ours, but they obviously didn't dillydally as that prized purple band was also fastened securely on their wrists.  and we were standing in direct sunlight.  despite the umbrellas we'd had the forethought to grab from the car, it was blazing and we were literally sweating buckets in no time.  it was gross.  and we could see the setup for the photos - right out in the sun just like we were.  i couldn't believe they were going to have him stand there in the miserable heat for over an hour, greeting fans who were bound to be hot and nasty.  ick.

and, unlike the first appearance, he was about 15 minutes late.  by that time, even the teen was ready to throw in the towel.  we stayed long enough to watch him drive up, with screaming meemies running to the car: 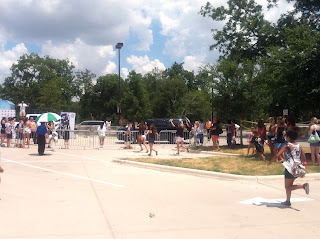 watched him emerge from the limo-tinted tahoe: 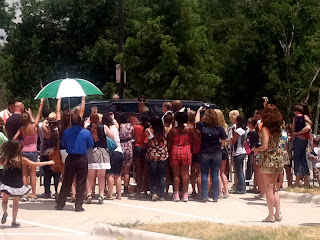 and we gave it about 15 minutes before we realized that the line wasn't moving, the clock was ticking, and we'd likely not get lucky like others had at sam's.  because he'd gotten there early, he had time to spare and a bunch of fans who didn't have wristbands still got in to see him anyway.  obvs, given the less-than-comfy atmosphere, he'd be there just for the exact amount of time necessary and then bone outta there.  hell, i would.  i scurried up with my phone to get a shot of him for the teen, and that was enough for her.  "i already got to meet him once today, i'm good," she said wearily.  THAT'S how hot it was out there. 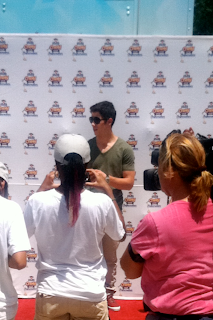 inside the kroger, where the bean and MIL were kickin' it, i was amazed to see that there was a jewelry store and a full-on furniture section in there.  in the grocery store.  my pics are extra fuzzy because i was delirious from the heat, you see. 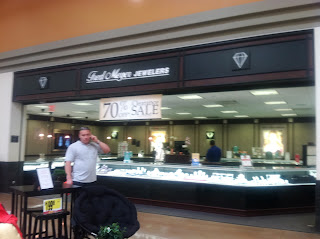 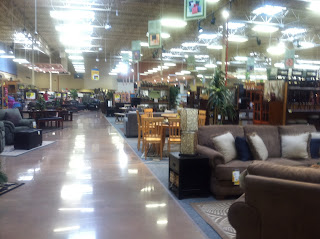 the bean and MIL were quick to fill me in on the awesomeness of this cart - it had a little screen in it that played disney junior tv shows.  fan-shee. 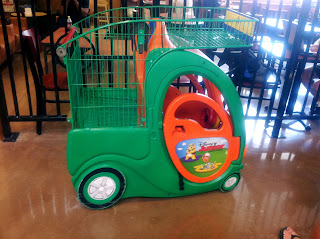 and so where are those prized photos, you ask?  well, you knew i wouldn't leave you hangin'. 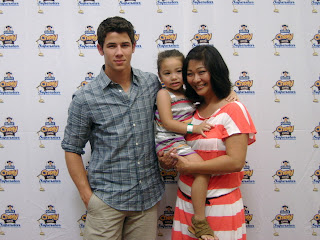 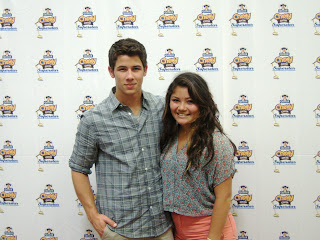 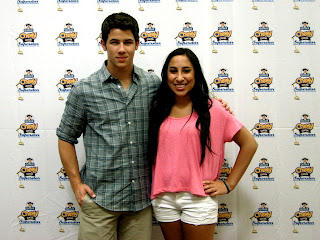 see you at the hollywood bowl in a couple of weeks, nick.  make sure you come by our section to say hello.  you know, since we're like that.
at July 28, 2011

Email ThisBlogThis!Share to TwitterShare to FacebookShare to Pinterest
Labels: don't mess with texas, more jonas brothers, the teen is in love