like, a lot.  like, i could totally eat my weight in the stuff (and probably have, a few times over).  but aside from the simple fact that it's, well, pasta, butter, and cheese, i figure that that frozen concoction has got to be chock-full of all sorts of chemicals and preservatives.  now obviously, i got no beef with processed food.  but we all know how i love to cook stuff from scratch.  and since i still needed something to make for the annual SFAM holiday hoorah (yup, a little late this year. schedules are damn hard to coordinate with a group as big as ours), i decided to see if i could find a good copycat recipe.

and of course, the google came through.  well, i did have to wade through a handful of sites before i came across the right one.  and the dude who wrote those "top secret recipes" books and has the show on CMT apparently made a great clone, but the recipe wasn't free.  since i'm a cheap ass who didn't really wanna pony up the $.79 to download it, i kept searching and finally found this one.  i read though it and it seemed almost too simple, but i find that most things that are worth working on usually don't really require herculean efforts.

only for people i love would i bust out a hand grater and a block of sharp cheddar.  seriously, folks, i busted my ass to ensure perfection. 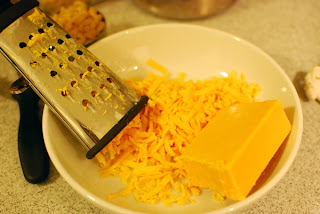 the cheese sauce simmered for a full thirty minutes.  i kept whisking it throughout that time to make sure it didn't get lumpy and funky. 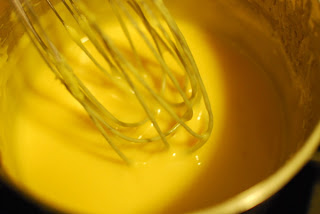 once it was ready, i stirred it into the cooked macaroni and voila - a perfect clone of that delicious frozen entree, sans preservatives! 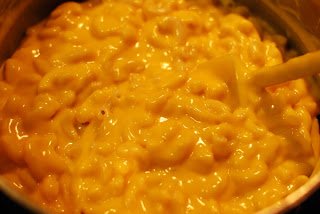 oh, but it gets better.  because as everything else was simmering and boiling and stuff, i'd put a pan of bacon into the oven.  when it was cooked to perfection, i chopped it up and mixed it right into that bad boy. 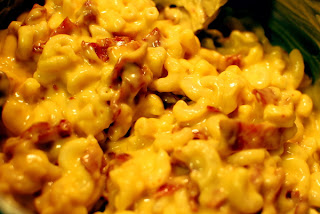 knowing that we had at least one vegetarian on the guest list, i made sure to scoop out a portion of meat-free cheesy goodness before adding the magic ingredient. 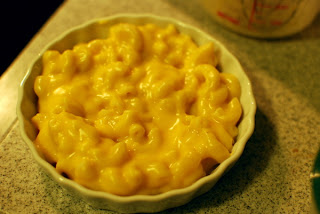 even though it sounds silly, i followed one of the tips in the recipe - the finished mac & cheese went right into the freezer.  i guess i made a true frozen dinner after all.

the next morning, i woke up with the most brilliant idea that ever was:  i would serve it scooped out into bacon cups.  yessssssss.  and after perusing a few sites to get some tips and techniques, i decided to use my mini muffin pan to make little bite-sized appetizer-type thingies.

the pan got flipped over, misted with a bit of nonstick spray, and then i cut the slices of bacon into thirds and crisscrossed two on each cup. 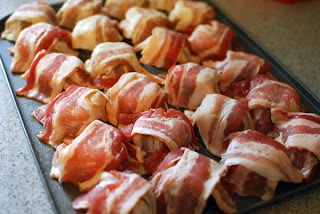 my pan actually has a nice little lip around it that i thought would do a good job of catching the bacon grease, but because of my fantastically vivid imagination, i took some precautions as i put it into the oven to cook. 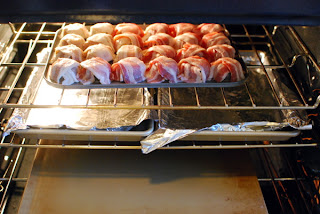 see what i did there?  two foil-lined pans to catch the grease, plus a cookie sheet underneath that just in case anything happened to drip between them.  better safe than sorry - i cringed just imagining walking into the kitchen to find it engulfed in flames from burning bacon grease.  yikes.

anyway, i let it sit in there for about 25ish minutes before turning the broiler on to finish the job.  i experimented with it on both high and low settings and then when i was finally satisfied, this is what i had: 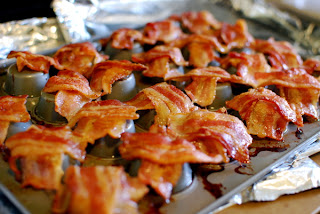 they'd shrunk quite a bit (which i'd expected), and mostly lost their shape (which i'd hoped to avoid), but i figured nobody would care.  according to my research, it would have been ideal to press a second mini muffin pan on top of the crisscrossed bacon to hold it down and mold it into the cups, but i didn't have another one.  and when i pulled them off to drain, there was still a distinct cup-like shape that held a mini scoop of mac & cheese oh-so-perfectly.

the frozen mac & cheese bubbled merrily in the oven, and came out looking exactly like stouffer's (well, if they were smart enough to mix in bacon like i did). 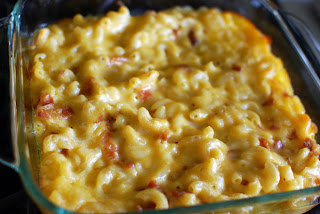 using my cookie scoop, i dug into the pan, pulled out a nice little serving, and squeezed the scoop to release it into the first bacon cup. 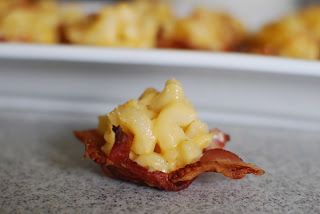 i was thinking that maybe it needed a sprinkle of parsley or something to add a little color, but i didn't want to ruin the smoky, cheesy flavor of what i'd put together.  i made a whole platter's worth of cups and stood back to admire what i'd created.  i was so stinking proud of myself. 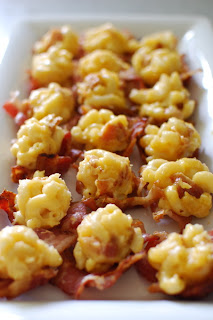 there were actually a few extras that didn't fit onto the platter, and after all, i really needed to taste it to make sure it was okay...right?  heh.  and just to confirm, i called the teen over to give it a shot too.  not surprisingly, she loved it.

Email ThisBlogThis!Share to TwitterShare to FacebookShare to Pinterest
Labels: adventures in cooking, baconanza