last week, my friend kim posted a picture on twitter of a project she was working on for valentine's day.  i liked it so much, i decided right then and there to be a total copycat.  after all, that's totally my style anyway - find something super cool/cute/awesome/fabulous elsewhere and just duplicate it.  i really don't have any creativity of my own at all, people.  i'm just damn good at copying other people's great ideas.

between the dollar store and michaels, i managed to gather all of the materials necessary. 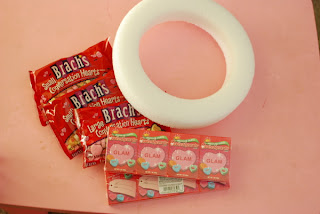 the bean helped me open the bags of candy and get them sorted out.  well, she might have sampled one or two as she worked. 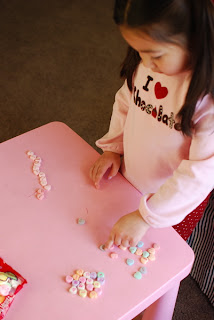 i had picked up "regular" candy hearts and some that were marked "glam."  they looked like they were all pretty and sparkly, and i figured they'd look cool all sprinkled in between each other.  but when i looked closely at them, i didn't really see much of a difference.  do you? 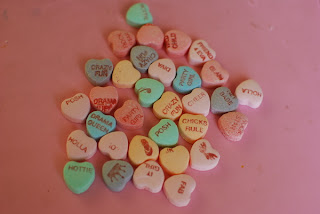 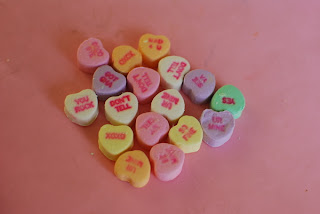 whatever.  and as i sat there with the bean as she watched the chipmunks movie for the gazillionth time (it's her current obsession, since seeing "chipwrecked" in the theater and then picking up the first two DVDs at target), i managed to blow through most of them to create this: 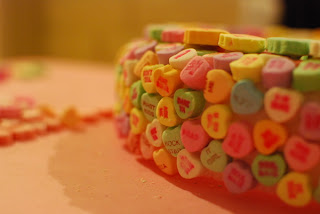 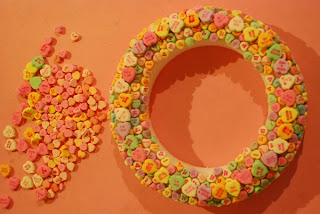 and through it all, i didn't burn myself even once with the hot glue gun!  i'm just that good.

because i was being a color nazi, i stopped when i ran out of purple, blue, and green hearts.  i wanted to cover the middle of the styrofoam base too, but i had to run out and buy more candy so that it wasn't all pink, yellow, and orange.  that was okay, though, because i also decided that i needed to spray the finished wreath with an acrylic sealer in an attempt to keep the bugs and birds away. 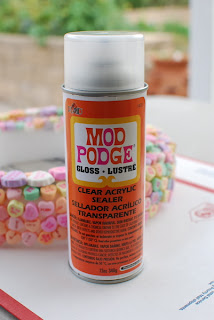 i was a little worried that the edible ink on the candy would fade, or that the candy itself might melt, so i sprayed cautiously at first.  luckily, my fears were unfounded - so i added a couple of extra coats. 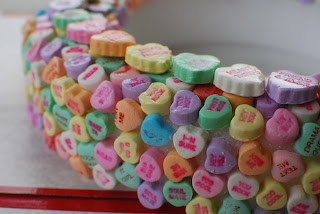 after i was done covering the center of the wreath, i sprayed it again with the sealer and added a little extra bling.  cute, right? 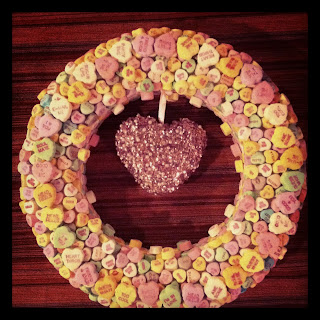 i'm still debating whether or not to hang it outside or keep it indoors.  since i have damn near a month left till valentine's day, i think i have some time to waffle.
at January 20, 2012