inspired by my friend nanette, i decided to try something totally out of my comfort zone:  a green machine smoothie that she'd discovered via pinterest.

i miss nanette.  but despite her recent move up to oregon, it's really nice to still be able to easily keep in touch with her as often as when she was here in l.a.  thank goodness for social media - i still get to talk to her all the time via twitter and facebook, although i can't say the same for the bean.  she misses her friend em, and still asks about her at least once a week.  "mommy, is em still far far away?" she'll ask.  awwwww.

anyway, so yeah - the smoothie.  i headed to the grocery store and bought a banana, which i promptly sliced up and stuck in the freezer overnight.  so after my yoga meltdown session with jillian michaels via DVD the next morning, i opened the door and was greeted by the aroma of fresh fruit. 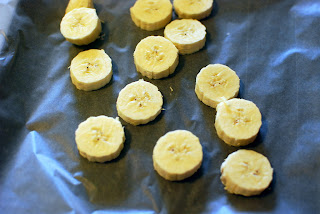 i know you're probably thinking, what the hell has come over her?  she doesn't even like fruit!  now while this is certainly true, it's really chunks of the stuff that i dislike immensely.  i'm cool with the flavor and the smell of most of it (cherries, pears and peaches excluded, just to name a couple of my non-favorites), and if it's pureed into stuff - well, that i can totally get behind.  so smoothies are actually perfect for me.

following the recipe, i added a tablespoon-ish of peanut butter. 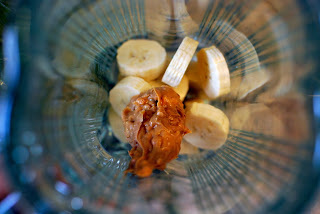 and then the magic ingredient:  fresh spinach.  i'd sent the teen to the grocery store to pick this up for me and forgot to specify that i preferred the bagged kind, but that was okay.  this worked. 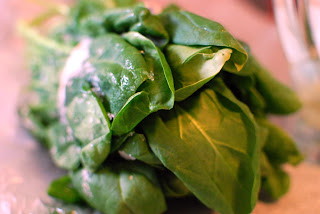 with the milk and fat-free greek yogurt, this looks...appetizing, huh? 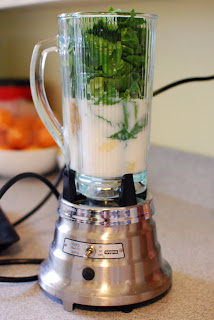 i gave it a whirl. 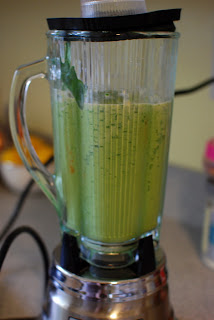 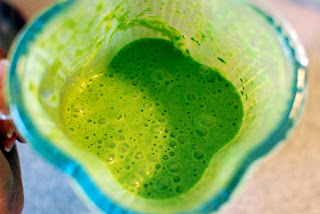 i'm not gonna lie.  this stuff smelled really bizarre.  but i was determined, so i busted out one of my starbucks cold cups to make it look more appealing. 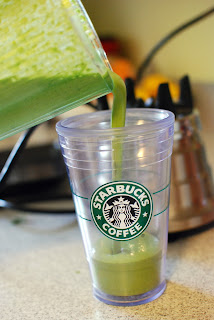 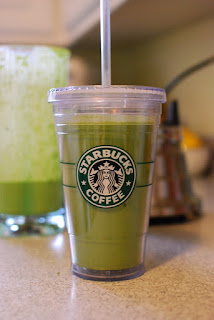 i posted a picture on twitter of myself hesitantly taking the first sip.  remember, this was post-yoga AND pre-fruit smoothie sampling, so click on that with caution.  heh.

anyway, despite the slightly off-putting aroma, it really wasn't bad.  i couldn't detect any spinach flavor at all, just the banana and a hint of the peanut butter.  except that there wasn't much sweetness to it.  and you all know how ginormous my sweet tooth is.  i have a feeling that the culprit was using plain yogurt instead of the vanilla flavored sort (because that's all i had in the house).  so i thought about it for a few seconds as i continued to sip, and then it came to me: 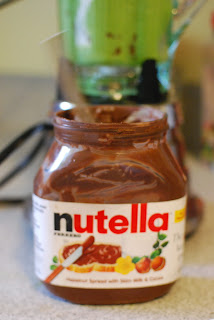 that's right.  i poured the smoothie back into the blender, took a spoonful of nutella, and started 'er back up.  and wouldn't you know it, the taste of that smoothie improved by about a gazillion percent.