as i was packing for our overnight stay at the disneyland resort, i remembered that i had one last detail to complete my tinkerbell costume for the race.  i got out the materials: hot glue gun, mini claw clips, and a pack of fluffy white pompoms. 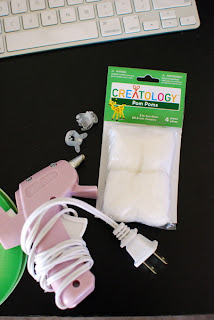 in about fifteen seconds, i had these: 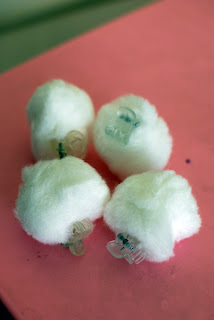 i clipped them onto my shoes, and voila!  instant tinkerbell running kicks. 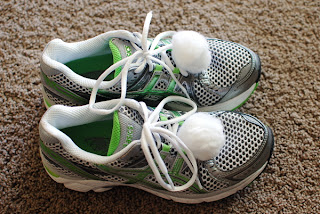 i'd been a little concerned about freezing my balls off while waiting for the race to start, since we'd been told to arrive by 4:30 and be in our corrals (ugh, makes us sound like cattle) by 5:15.  AM.  eek.  and then i read that lots of people bring jackets and sweatpants to stay warm at that ungodly hour, toss them aside when it gets too warm, and disney washes it all and donates to local homeless shelters.  so i scooped up a cheapy hoodie and some pants that magically happened to match my theme. 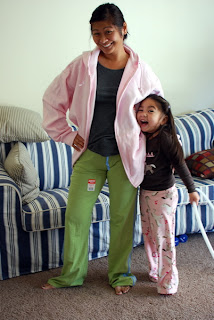 and one last thing to complete my ensemble (yes, i sure do have a special bag for my tiara): 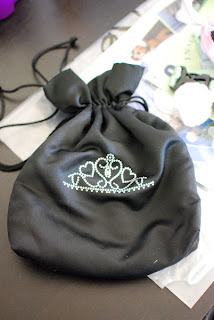 because i had a team dinner with my fellow autism speaks running mates, i got some unexpected alone time as i drove down to disneyland to check into the hotel.  paradise pier is the least expensive hotel out of the three at the resort, and we had a group rate that made it even cheaper.  score! 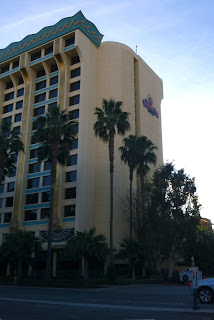 despite the fact that it's the "value" hotel, it looked like it had been recently renovated and was super cute inside. 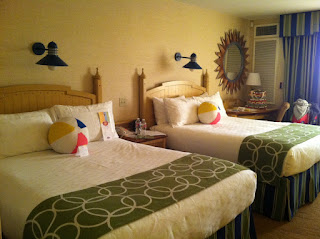 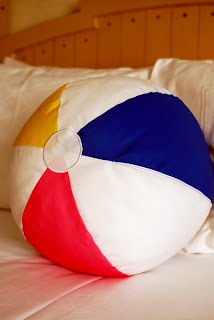 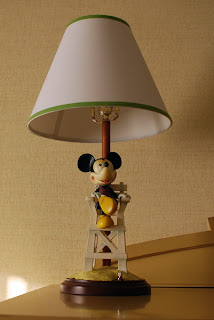 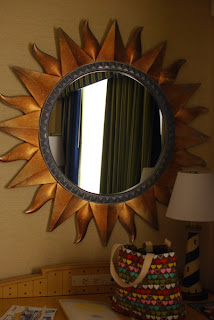 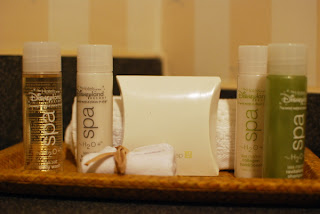 i was rather amused by this: 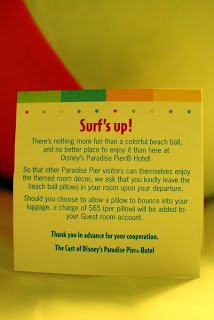 i decided to stroll over to the health & fitness expo again, just to make sure that i hadn't missed anything the day before.  plus, i'd been mulling over one of the warm-up jackets emblazoned with the tinkerbell half marathon logo, and thought maybe i'd scoop one up.  oh, and i decided i'd get in line at the abc booth again in the hopes of scoring a second pan am bag for the teen. 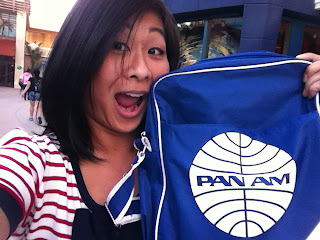 i got back to the hotel with just enough time to put the bag away and head into one of the meeting rooms for the team dinner.  as i strolled in, i spotted a table with a young asian couple and a girl who appeared to be riding solo and sporting a hot pink running jacket from old navy - which i recognized because i've been training in that same jacket for the last few months.  i figured it was the perfect spot for me.  and as we introduced ourselves and chatted a little, i was happy to learn that they were newbies to the half marathon thing too, and they were all super nice. 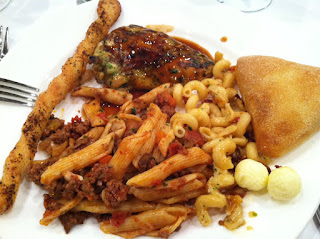 i giggled a little to myself when our host invited us to indulge in the dessert buffet and said something along the lines of "you've worked really hard and avoided this kind of stuff for months, so you deserve a treat!"  because, duh - i'd had cookies on the drive down to anaheim. 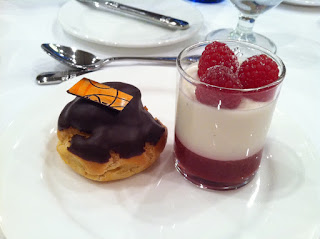 we gathered in front of the banner for a picture.  this was just a fraction of the group, as our team actually had 65 members. 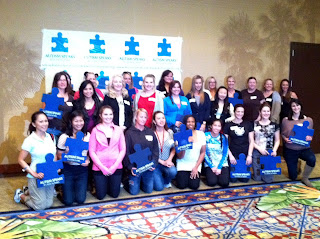 with my table BFFs. 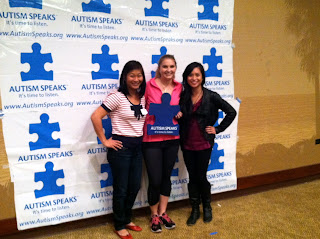 i got to relax for a little while in our room as i waited for the girls to arrive.  and when they did, i handed the teen the fun noisemakers i'd gotten at dinner. 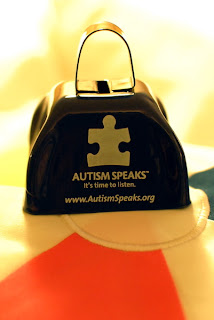 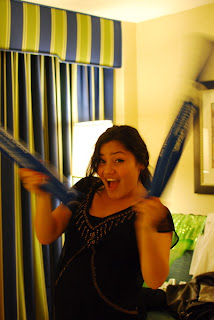 we headed straight over to downtown disney so that they could have some dinner.  and because it had actually been three hours since i'd eaten, i was hungry again.  oy vey.

the teen and her prize from the balloon lady at the restaurant.  do you love it? 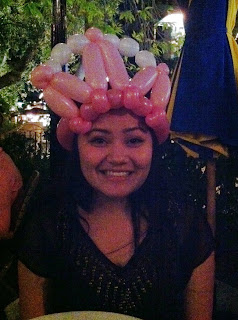 and then the bean and i clowned around in one of the shops. 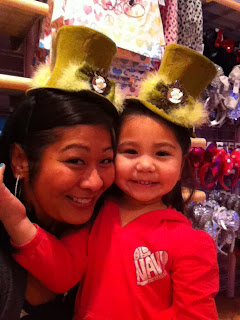 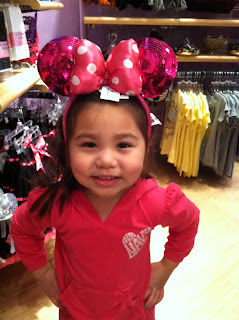 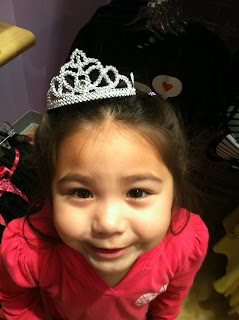 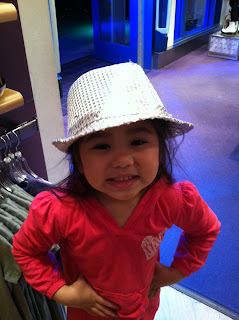 back at the hotel, she was excited to see this cute room with lounge chairs in her size and a steady stream of disney cartoons. 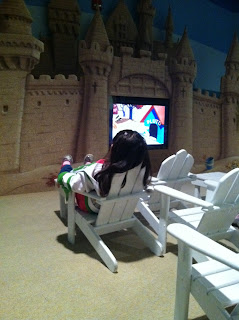 upstairs, i laid out the essentials for the next (super duper early) morning. 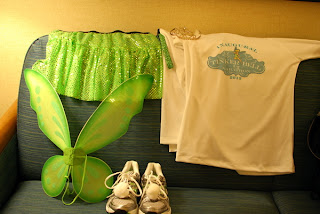 just to be sure, i tried on all of the pieces according to the tips i'd gotten from team sparkle.  after all, i didn't want to have to worry about continually tugging on the wings to keep them in place.  and so i was extra glad i'd packed a bunch of safety pins. 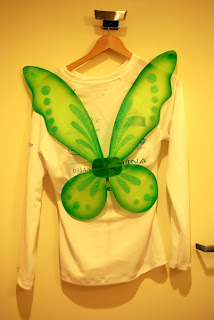 Email ThisBlogThis!Share to TwitterShare to FacebookShare to Pinterest
Labels: disneyland, running my ass off, tinkerbell half marathon