when mr. lilcee e-mailed me a link to a fun-looking 10K run hosted by nike, i wasn't really all about it since it was only a week after the hollywood half.  but as i thought about it more and more, it sounded like a blast - an 80s-themed race aimed towards women with a cute bracelet as the finisher's medal?  plus, it was in the same area as the restaurant i was meeting a group of fun friends at for brunch.

instead, i headed out to the rose bowl to try out the famous loop that is a favorite of local runners, walkers, and bicyclists.  after the STORM!WATCH! 20!12! that we'd survived through the day before, it was a beautiful day. 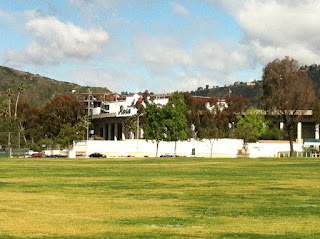 as i always do, i ran using my C25K app on my phone.  so even though mr. lilcee had told me the loop was equivalent to a 5K, i was still amazed at how accurate that statement was.  the app told me i'd reached my goal at the very moment i arrived directly in front of where i'd parked my car.  so awesome. 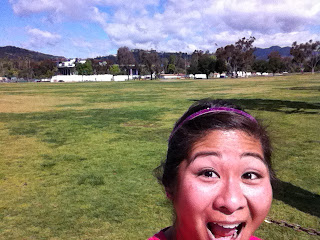 i'd brought stuff to freshen up in the car, and despite the fact that i was parked on the street in a busy-ish area, i arranged my sun shades and did my thing.  i'd warned the girls that i was coming straight after a run, but i still didn't want to roll up and be all huggybear and stuff all stanky.  that's not how i roll.  heh.

there wasn't a whole lot of traffic on the freeway, thankfully, and i managed to get to the restaurant right on time.  i circled the block a few times looking for parking, and thought i'd totally scored when i found a great spot just around the corner.  except that upon closer inspection, the street signs told me that unless it was monday-friday or i had a permit, it wasn't gonna work.  poop.  so i sucked it up and pulled up to the valet instead. 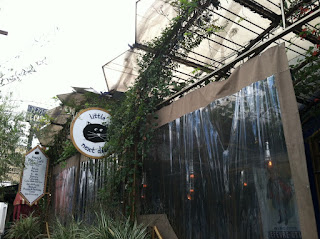 the monkey and insom were already there, so we went ahead and grabbed a table when it became available for our party of seven. 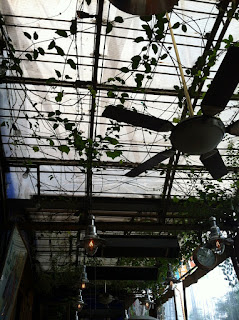 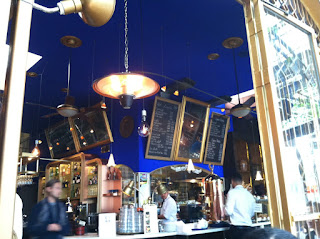 i'd perused the menu online, but still had no idea what i wanted to eat. 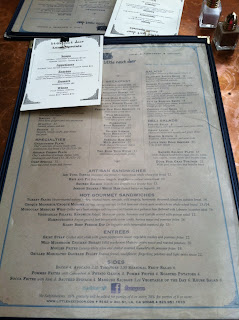 i knew i wanted something delicious to drink though, and i was excited when this bowl of caramel latte arrived. 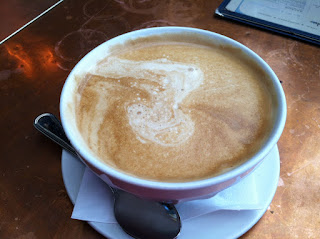 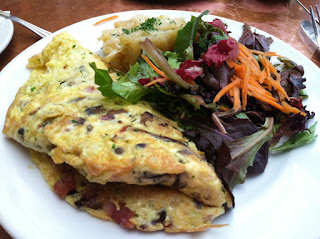 AMP got a wild mushroom benedict.  isn't it pretty? 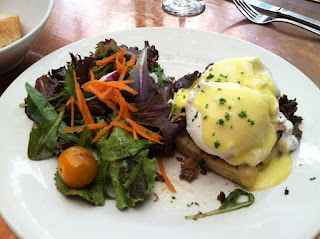 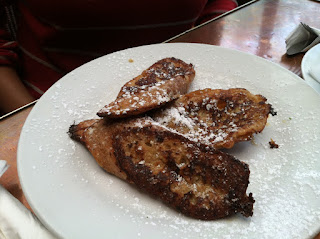 but the winner at this table was insom, who decided not to pick between her top favorites on the menu and simply ordered both - fig and brie on a baguette, and the french ham & butter sandwich.  look at how cute the presentation was: 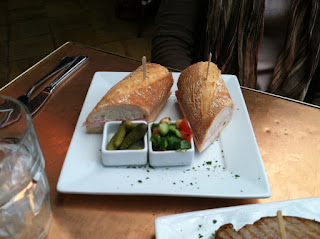 outings with my friends is always a blast, and this was no exception.  we cackled and clapped and "yay!"'d right through two hours without even realizing it.  we'd probably have stayed even longer if not for the hostess, who i'd noticed circling us with a meaningful stare.  she finally stopped and told us that there was a long wait for tables, and could we please move into the bar area?  i suppose it was better than simply asking us to get the hell outta there unless we were gonna order more grub.

but the single best moment of the entire gathering came courtesy of the monkey.  "i'm surprised we haven't seen any celebrities.  WAIT, that's jimmy kimmel!"  and sure enough, it was.  i practically laid my head down in her lap to peer around the corner and see for myself.  and then our friend jtx decided she had to go to the bathroom (you can see the air quotes i just used there, right?), oh-so-casually glanced in his direction, and then turned around and gave us a look that basically said "yup. that's him, all right."

when he got up to leave, both the monkey and i snatched up our phones to get photographic evidence of our sighting.  and when i looked at the photo i managed to get, i thought i was gonna piss myself. 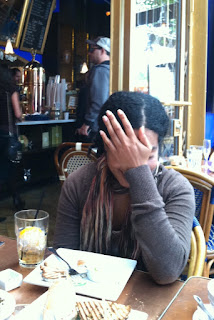 poor insom.  she's always subjected to our crazy shenanigans.  good thing we're so lovable in lots of other ways.  totally makes up for the embarrassment we cause her.  ha!

although i'm sure she was slightly mortified when as if on cue, the monkey and i both waved at the departing celeb and called out "bye, jimmy kimmel!"