the day before the hollywood half, the girls and i headed out to the universal hilton to pick up my bib and goody bag at the fitness expo.  since i knew there were lots of runners (like 7,500+!) and they all had to come at some point because it was the only time to get this stuff - plus the fact that it was good friday - i figured it would be wise to get there as early as possible.

the expo had only been open for about half an hour when we arrived, but it was already ridiculously crowded.  parking alone was quite an ordeal.  signs posted at the entrance told us we'd have to pony up $10 for a space, which sucked.  and there was an endless stream of cars ahead of and behind us. 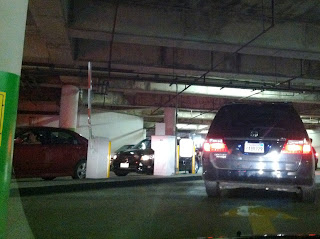 thank goodness we found a spot fairly quickly, and right by the elevator.  and it wasn't hard to figure out where we needed to go. 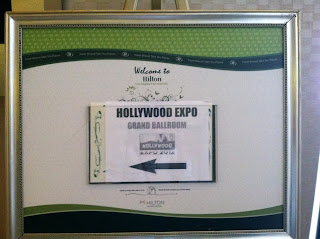 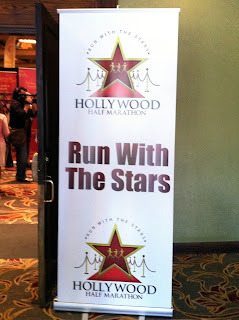 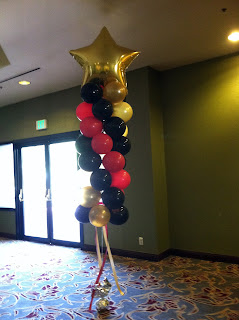 we'd signed up the bean for the 1/2 mile kids' run, so she happily posed with me as her sister snapped away. 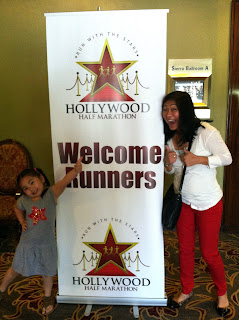 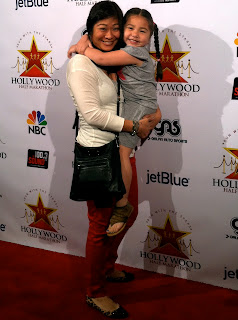 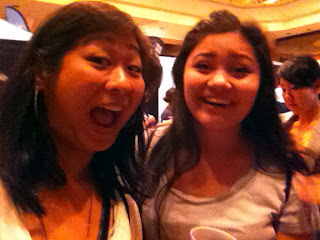 later on, i read a gazillion complaints from other attendees on how difficult it was to find where to check in.  so either i'm a freaking genius or they're all idiots.  there was a wall with bib numbers listed in alphabetical order: 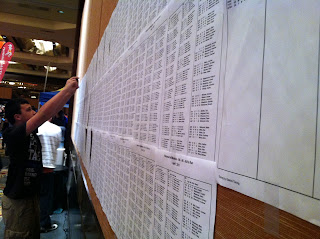 and then you just had to get in line according to that number.  mine was #5769.  easy peasy. 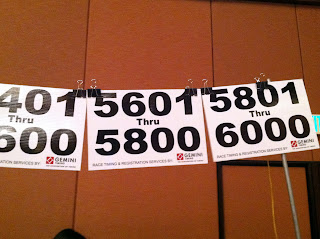 the line to pick up tees was a little unorganized, but still not rocket science.  the signs on the wall clearly stated "women's medium" or "men's large" or whatever you needed.  and it seemed that folks registered for the half got black bags, 5K/10K got white ones.  my friend kelley was signed up for the 5K, so we picked hers up to save her a trip. 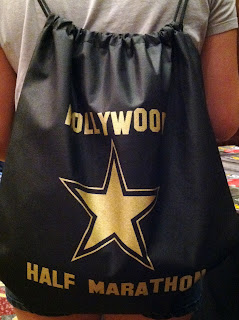 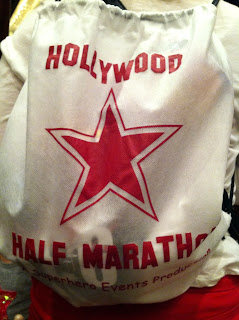 there was all the usual stuff - lots of vendors selling everything from energy gels to garmin watches to running gear in all colors and sizes.  i would've loved to pick up a jacket with the race logo, but wasn't about to drop $50 on one. 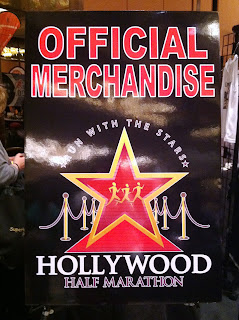 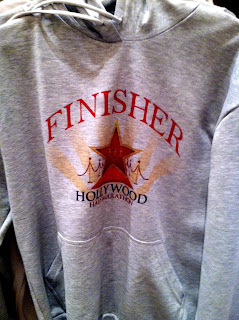 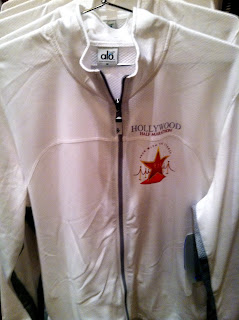 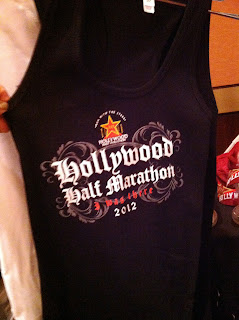 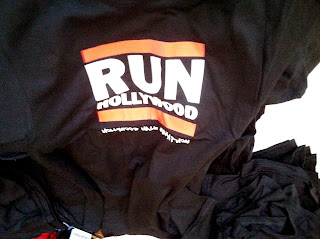 i had a couple of basic questions that hadn't been addressed on the website, so we stopped at the information booth and perused the course map as i waited my turn. 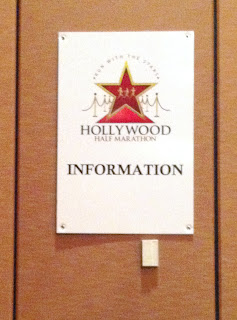 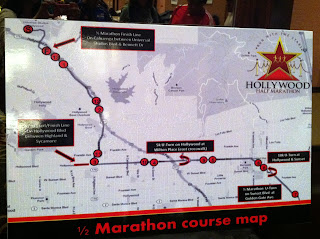 unfortunately, the woman standing there was completely clueless and wasn't able to answer any of my questions.  she said that the person who was supposed to be there hadn't arrived yet, but you'd think they could've gotten someone who had their shit together to help out instead of someone who had no idea what was going on.  frustrating.

the bean was happily munching and sipping from samples of energy bars, water, and a lollipop she snagged from another booth.  oh, and she likes to watch herself eat. 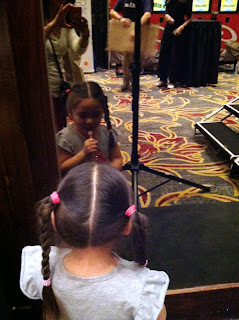 this dude in a head-to-toe unitard thingy, promoting a new year's half marathon, was standing on a chair and shaking his groove thang.  she was pretty captivated by him and kept asking us to walk by him again.  and again.  "but mommy, he's not supposed to be standing up there.  he'll fall off and get hurt." 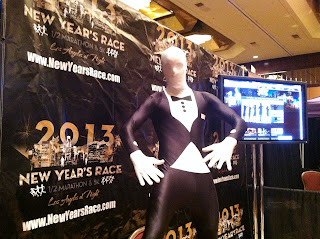 by this time, we were pretty much over the expo.  on our way out, we spotted the local news van interviewing the organizer of the race and some of the vendors. 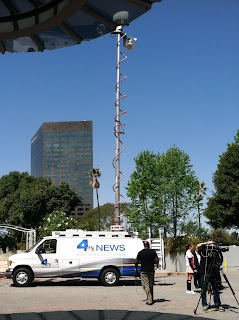 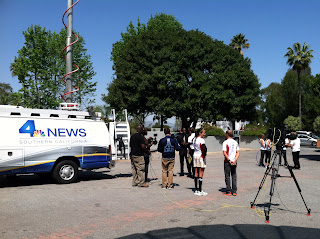 and the official pace cars were on display too. 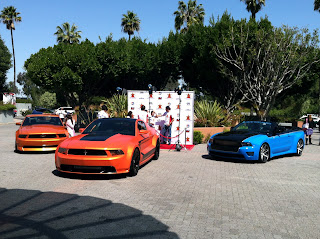 we'd reserved rooms at the nearby blvd hotel, about a quarter of a mile away from the start of the race.  it was early, but we managed to get checked in anyway. 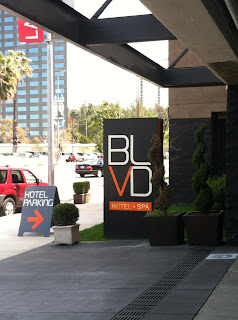 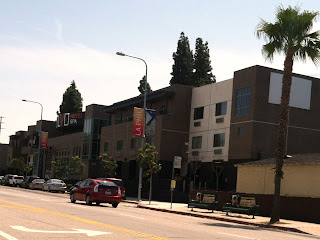 the bean thought it was cool that we had our own doorbell. 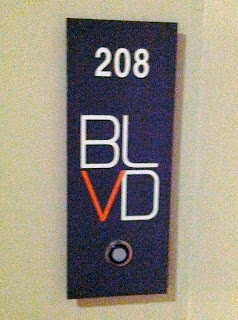 the room itself was pretty spacious, although it wasn't the one we'd originally reserved.  they somehow lost our reservation and we had to take what they had left - one king-sized bed with a small living area and kitchenette, and a handicap-enabled bathroom. 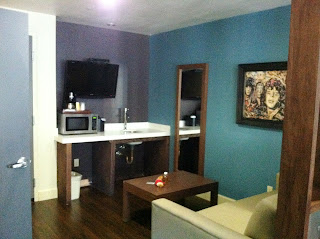 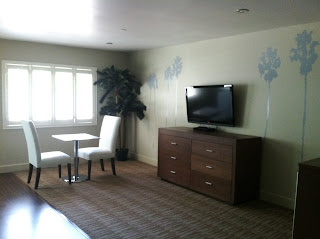 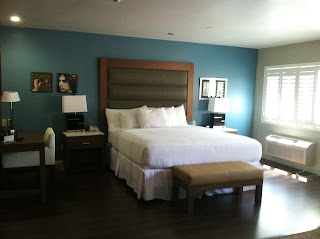 Email ThisBlogThis!Share to TwitterShare to FacebookShare to Pinterest
Labels: hollywood half