it was still dark when the shuttle dropped me off at universal studios, where the hollywood half was kicking off. 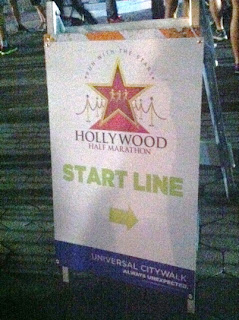 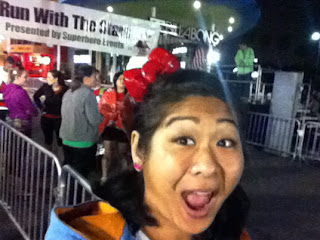 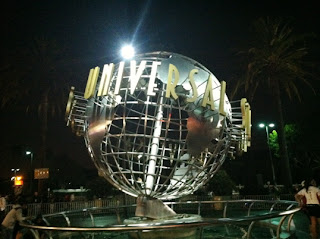 i walked around a bit, watching people pose in front of the universal globe and running around to warm up.  after i hit the port-o-potty (so gross, but you do what you gotta do, right?), i followed the line of corrals until i found the one i figured i belonged in.  we were to self-assign based upon our current pace, and so this is where i hung out till the race started. 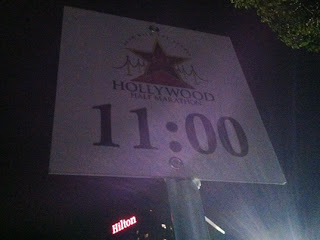 being an inaugural run, it was a bit disorganized and those of us in the later corrals couldn't really hear the announcer too well.  but that was okay - we just followed along behind the others and finally got to cross the start line probably 15 minutes after the fastest group was let loose. 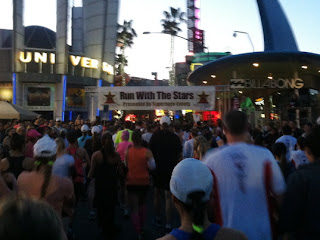 the first, oh, about 3 miles/5K of the course was all downhill.  pretty lovely until i stopped to think about how much it was gonna suck to run back up towards the finish line.  and i didn't take a whole lot of pictures as i tried to maintain a decent pace and keep from running over the walkers who insisted upon doing their thing right in the middle instead of veering to the right like they're supposed to.

i admit, i snickered when i noticed that every single mile marker featured an embarrassingly obvious typo. 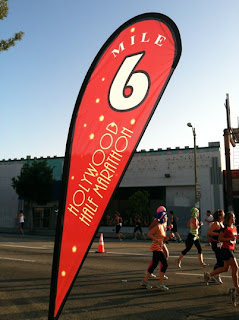 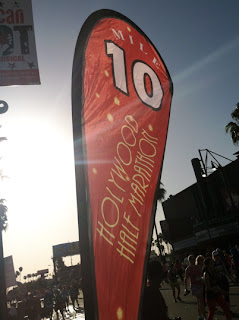 can you believe that this dude ran the entire 13.1 miles balancing a watermelon on his head? 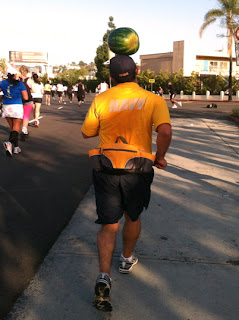 there wasn't a whole lot of entertainment or distraction set up along the course, but one corner featured a guy spinning some fun tunes (think "humpty dance," "baby got back," etc.) and shouting out encouraging words to the runners. 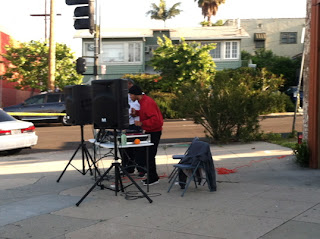 the 5K and 10K runs were set up along hollywood boulevard, right alongside us as we headed back towards universal studios.  i looked for my friend kelley, but there were a lot of people out there and it was impossible for me to scan the crowd the whole time.  oh, well.  and they got a much cooler looking finish line than we did.  bah. 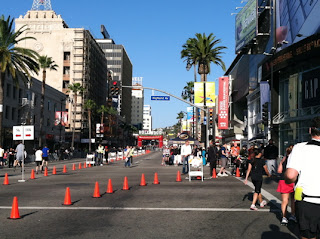 as we made the turn onto highland avenue from hollywood boulevard, it began:  the killer hill we'd been warned about.  and it was hell. 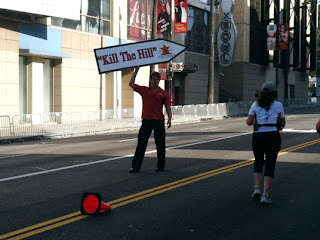 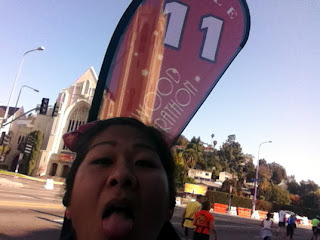 but as we approached the hollywood bowl and turned left to go up the cahuenga pass, it got even worse. 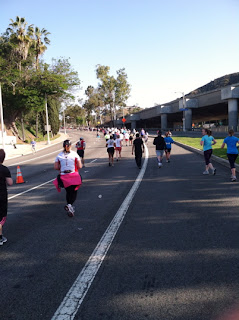 after all was said and done, it was roughly two whole miles of nothing but climbing uphill.  i was slightly gratified to look around me and find that 99% of my fellow racers were walking just like me.  it was just too damn hard to do more than that after the first eleven miles of a half marathon.  i swear, this hill was like a cruel joke.  although it wasn't like we didn't know - it just happens that the reality is harder than hell compared to when you're psyching yourself up in your head for it.

thankfully, as we got to the last quarter mile, the hill ended and we were able to run down to the finish line and end it triumphantly. 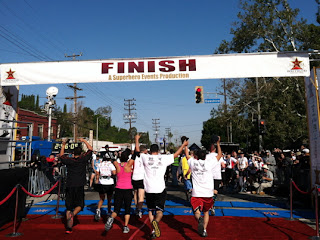 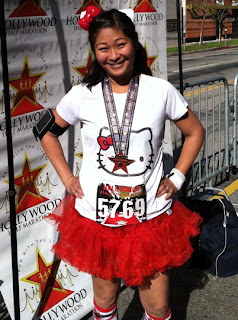 but then, another snag - the limo/shuttle/party bus/whatever that we'd been promised for riding back up to universal studios never materialized.  later, i learned that they'd been sent to the course to pick up the runners who'd fallen behind the required pace.  and so i found myself trudging up that hill on my tired legs along with a bazillion other grumpy folks. 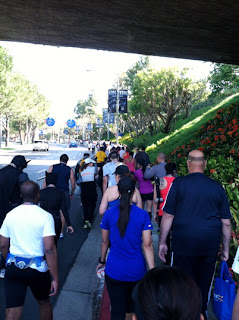 i managed to find my family right as i got to the bridge - the hub, the teen, the bean, rock-ell, and the ILs were all waiting happily for me.  the bean was so proud of her medal, and we got to take this together: 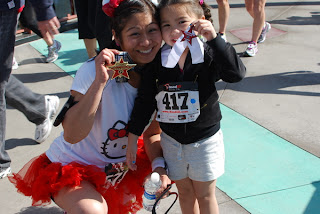 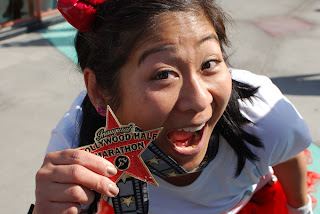 because it was so early, nothing was open - except for subway.  and at that point, i didn't even care.  i was so hungry, i just wanted food. 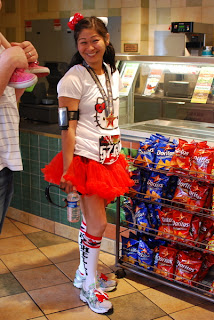 so now that i've run two half marathons, can i just put them together and have them count as a full?  because that's one thing i ain't ever gonna do.  nope.  no way, no how.
at April 13, 2012