operation workin' on my fitness continues!

so far this year, i've done two half marathons and an 8K.  not too bad, right?  plus i've been doing various workouts via my streaming netflix and my small stash of DVDs.  i think i'm doing something active at least 4-5 times a week these days.  the teen and i tried spinning class, and then a few weeks ago took a free introductory class at wundabar, a local pilates studio.  it was really cool - they have their own patented machine that you do all sorts of muscle-shaking exercises on that was super effective even after just one class. 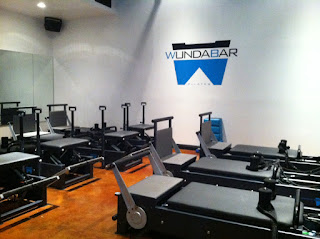 too bad it's too stinking expensive for my taste - we're talking $200 a pop for a series of ten classes.  ouch.  between me and the teen, we'd blow through those on a monthly basis.  um, i don't think so.

however, we've found a great alternative that's much more budget-friendly and even more fun, if that's even possible when we're talking about workouts.  my friend kelley re-launched her free weekly fit club classes on monday evenings at her mini-me's preschool in pasadena.  and she made it even more parent-friendly by making a babysitter available for a whopping $5.  i've been going for the last month-ish, dragging the teen with me whenever she's home, and lilcee started coming too, with mr. lilcee and mini cee.  the bean loves to see her friends for a weekly playdate, and it all works out perfectly.

the programs we've been doing are all beachbody products - p90x, 10-minute trainer, insanity (which more than lives up to its name. i thought i was gonna die).  it's always a challenging workout, and a rough ass 45ish minutes.  here we are after last week's turbofire session: 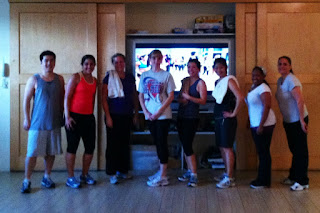 you can't really tell, but i looked like i'd just taken a shower in my clothes.  total wet rat city over here.  it was gross, and it was a good thing we weren't having dinner together afterwards.  no restaurant in its right mind would've let me in.

so in other running news, i've entered the lottery with a group of awesome friends for the nike women's half in san francisco this october.  we've already decided that if we don't get selected (like about 4 years ago when we were shit outta luck), we're going to plan a girls' trip anyway.  the deadline for entering is tonight, and i hear that they do the drawing shortly thereafter.  if you're wondering why it's so popular, i've got two words for you:  tiffany's necklace.  as in, that's what we're given as our finisher's medal.  plus i hear there's all sorts of fun swag in the goody bags and a beautiful course to boot.  i really hope we get in.  all good luck vibes are welcome.

i'm also signed up for the pasadena marathon's 10K, a silly-sounding 5K pajama run, a 5K benefiting the liz logelin foundation that we'll do at the rose bowl, plus the disneyland half.  remember, my goal was to run some sort of race at least once a month (although i blew it in march, boo) - so i'm currently on the lookout for something to cover july and august.  of course, the two hottest freaking months of the year.

if someone had told me a year ago what i'd be up to these days, i'd probably have farted from laughing so hard.  like, seriously - who AM i?  sheesh.
at April 20, 2012

Email ThisBlogThis!Share to TwitterShare to FacebookShare to Pinterest
Labels: operation bathing suit 2012, running my ass off