tomorrow, i'm running in the very first hollywood half marathon.  it's been a couple of months since i did the tinkerbell half, and since crossing that finish line i've kind of become hooked on the rush. 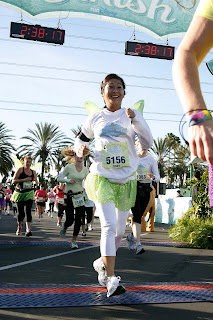 plus, i get to wear this when it's over: 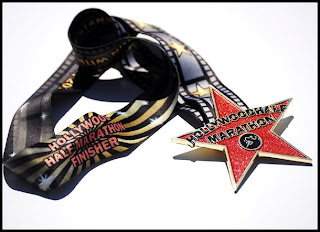 super cheesetastic, i know - but i don't care.  i like it.  and i get to run down hollywood boulevard!  it'll be fun, and i'm excited.  too bad i've been battling a cold and cough for the last week and a half (plus my first battle with pink eye, EW), but i'm hopeful that i'll be just fine.  what sucks is that i didn't get to do my last long training run, and i'm a little worried about that, but as long as i cross the finish line i guess i don't care what my time is.

who am i kidding?  of course i'm going to care.  i'll be pissed if i can't meet or beat my tinkerbell time.  ugh.

so for this run, we were encouraged to dress up as celebrities.  i seriously couldn't think of a costume i could pull off.  after polling via twitter, someone had suggested audrey hepburn in "breakfast at tiffany's," which would have been easy.  black top and running skirt, elbow-length gloves, tiara, pearls.  but i thought it might have been too obscure to figure out.  not to mention, i didn't think i could really run with a string of pearls around my neck.  heh.

but then i walked through a couple of stores after picking up my free disney store ears, and then i realized i could totally pull off something that would be unmistakable: 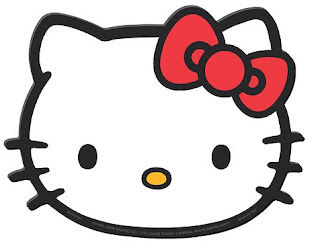 after debating between red and pink for my color scheme, i managed to scoop up a red tutu at hot topic on clearance for $3.98.  that settled that.  except that when i tried to find a simple white hello kitty tee with a red bow...i was shit outta luck.  every last shirt i came across was pink.  i was so irritated until my friend lilcee reminded me that i could just make my own.  duh!  so i bought a plain white tech shirt at target, printed my design onto iron-on transfer paper, and i'm all set.

for the piece de resistance, a quick trip to joann's for $4 worth of red and white pleather, some sew-in hair clips and about half an hour of work resulted in this (please excuse my makeup-less face): 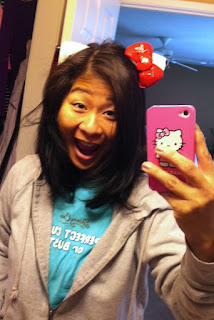 they aren't very pretty when viewed close-up, from behind or the bottom though. 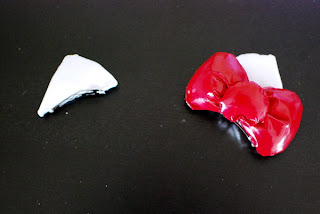 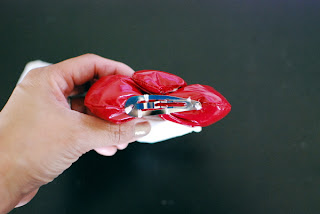 but who cares?  i'm gonna be hello kitty!

oh, and here's a random photo of the bean. Email ThisBlogThis!Share to TwitterShare to FacebookShare to Pinterest
Labels: hello kitty love, hollywood half, running my ass off