i realized that i'd fallen into the habit of hitting the nail salon for a gel manicure/spa pedicure combo on a pretty regular basis - like every other week.  yikes.  so in an effort to cut back on the spending, i figured it was time to relearn how to do my own nails.  i've never been really good at mani/pedis aside from simple cuticle cleanup and basic polish, so i thought maybe if i scaled it back to once a month and DIY touchups in between, that would work.

the teen and i went for pedicures together last week.  and since i knew i wouldn't be back for a while, i decided to step outta my box and try something a little different from my typical french tips or neutral polish color: 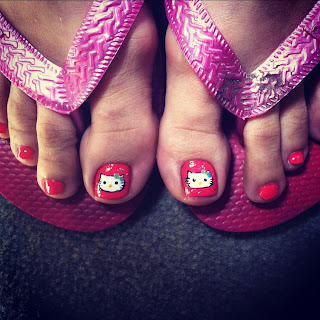 cute, right?  oh, and please excuse the crusty flip-flop.  heh.  anyway, as the nail tech labored over that adorable work of art, i paid very close attention.  i took note of what tools she used, how she used them, and filed it all away in my peabrain for later use.  one trip to sally's beauty supply yielded everything i needed, and in a fabulous budget-minded twist, it was all on sale.  score!

while the bean was napping and i was getting caught up on "general hospital" (which is getting really good lately, by the way, you should totally watch), i caught a glimpse of my fingernails and realized that they needed a bit of work.  the polish had chipped and peeled a little and was basically not up to my standards for being seen in public.  and with an evening at disneyland ahead of us, i was inspired to do a little experiment.

the tools of the trade: 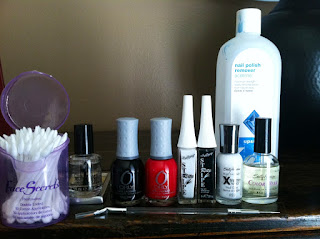 i started with a base coat, and then a couple of layers of orly's "haute red."  i thought i was going to get all cutesy and did my ring fingers in a plain white - but either that polish was too thick or the brush was shitty, because they ended up looking like i'd gotten bored in homeroom and painted them with some liquid paper.  i guess it's appropriate, considering that shade is sally hansen's "white out."

in another episode of "wan isn't as clever as she thinks she is," i busted out a pencil to see if i could use the eraserhead to paint a perfect circle on those white nails.  i dabbed a bit of orly's "liquid vinyl" on the first piece of cardstock within arm's reach, dipped it in, and it was a complete FAIL.  d-oh!  oh, well. 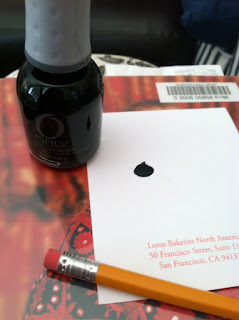 so i ended up replacing that white polish with the red and refiguring the design in my head.  i'd bought a double-ended tool along with my supplies that featured a dotting tool on one side and a superfine brush on the other.  but i wasn't entirely satisfied with it at that point and went into my stash of cardmaking supplies.  weird, i know.  but i knew i had an embossing tool that would do the trick, and after i fished it out of a box and tested it out with the white polish, i totally congratulated myself on how brilliant i was.  ha! 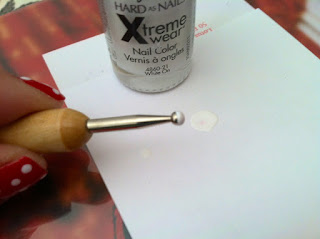 you can see what i did already, right?  i worked on both hands, added a little bit of flair with a dot of essie's "loophole", and voila: 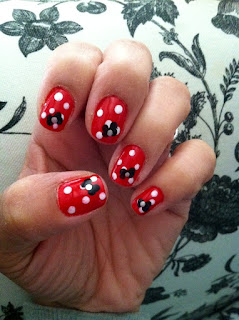 when she woke up, the bean was completely enchanted with the results.  and i was pretty proud of myself when the teen gave it her stamp of approval too.  she's not easy to impress.  whee!

between my nails and the awesome tee i wore, it was a pretty happy trip to disneyland. 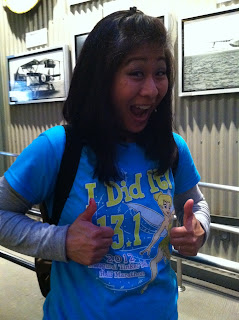