the bean has been taking piano lessons since september.  it's really only one half hour session, once a week - and i seriously cannot pay/bribe/threaten this child to sit down and practice at home.  like, there's nothing that i've discovered thus far that she's deemed worthy of plunking her little tush at the piano and banging a few keys out.

so when a notice came home a couple of weeks ago about a recital, i was mucho skeptical.  even knowing she'd be playing a song in front of fellow students and their families, she still had less than zero interest in practicing her ditty of choice - "b-i-n-g-o."  she was pretty blasé about it, and i figured if she wasn't worried about it, i wouldn't be either.

on the morning of the recital, i decided to try something new with her hair.  as always, many thanks to the awesomeness that is pinterest: 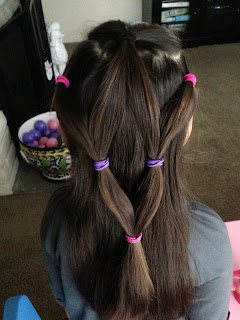 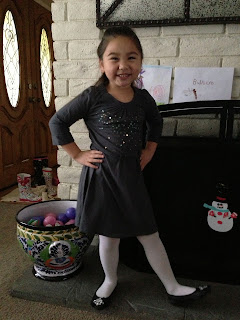 although i'd anticipated a jammed parking lot (after all, the teacher told me that there were 25 kids performing that morning.  yikes), we arrived just a few minutes early and found a spot quite easily.  either we were really on the ball, or everyone else was just running late. 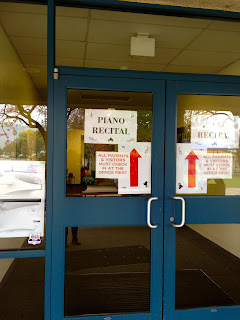 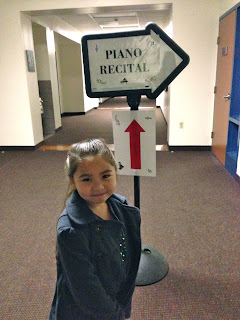 as soon as we set foot inside the music room, she was ushered away for a couple of pictures. 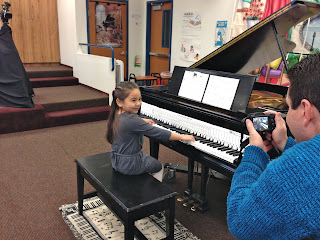 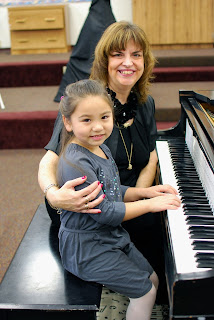 one by one, the rest of the performers arrived with lots of parents and bored-looking siblings in tow.  the hub and i managed to secure front row seats, and a quick glance at the program told us that the bean was one of the first five to play their piece.  good thing, too, because as she sat quietly in her seat next to one of her friends, i kept an eye on her as she took in her surroundings and the number of people who were coming in to watch.

and sure enough, after the first two kids had done their parts, she looked over at us with eyes as wide as saucers and the threat of tears beginning to well up.  poor little thing.  stage fright is no joke, especially at 5.  we motioned her over for a quick hug and some words of support, and after we'd reassured her that all she had to do was give it her best, she walked back to her seat and waited for her turn.  and i'm not gonna lie, i was getting nervous for her too.  my heart was pounding probably about as hard as hers was.

when it came, she got right up and took the microphone without hesitation to introduce herself and her song.  in a clear, confident voice she said "hi, my name is bean, and my recital song is b-i-n-g-o, BINGO!" she made a funny little gesture as she said it with gusto, and grinned as the audience laughed at her antics.  and then i knew that she was going to do just fine. 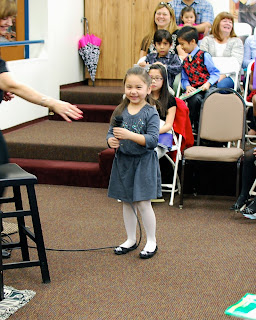 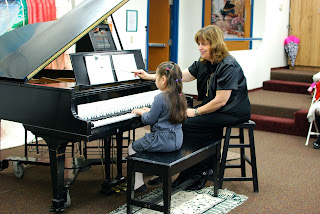 well, mostly fine.  playing the actual song was actually a rather slow process - something she'd been really worried about in the days leading up to the recital.  "mommy, the teacher says i need to play faster and i just CAN'T!" she'd say.  even knowing this, did she sit her little butt down to practice?  what do you think?  heh.

i breathed a sigh of relief when she finally struck the last note, and then got up, paused, and did a little curtsy as she'd been instructed.  i love shit like that.  and i could tell she was relieved as well as she plopped down on a seat next to me. 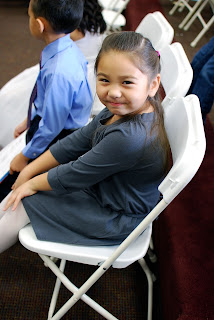 it took the better part of an hour to get through the rest of the kids.  thankfully, mine was clearly not the only one who needs to work on bringing up the tempo.  and then they each received a medal and a certificate. 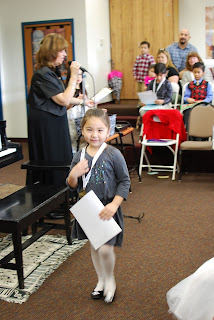 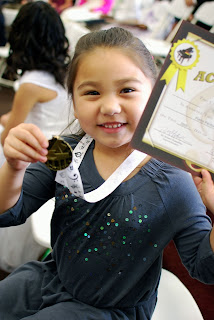 the next big thing is coming in march.  that's when the junior high's drama department puts on their annual play, and they tapped the cheer squad to join the performance as oompa loompas.  the teen and i watched them practice their routine the other day, and it's shaping up to be a really cute little addition to the play.