i can't believe it's damn near been a year since the teen and i visited the l.a. FIDM campus.  what's even crazier?  this visit was to conquer the first step towards enrollment - math and english tests. 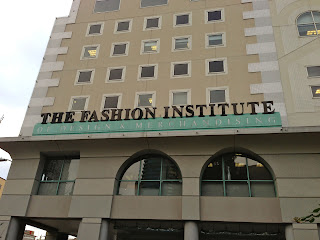 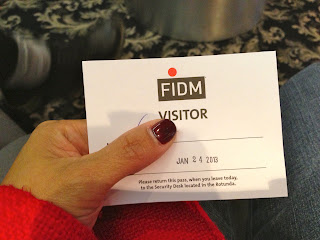 during our visit with the admissions rep, we learned that housing is available at several local apartment complexes.  for those students, a shuttle is available for the afternoon/evening to and from the campus. 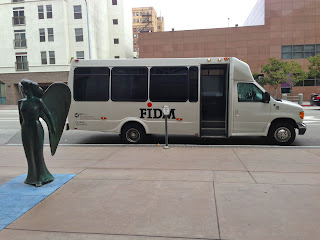 i'm super excited to report that the teen totally rocked those exams and is now working on her admissions project.  we completed the formal application and paid the fee, and now she's got an appointment in two weeks to submit her packet and meet with one of the school's directors.  eeeeeeeeee!  this is all so exciting, i can hardly stand it.

and that's where the fun ended for us that day.  we'd found super convenient parking right on the street, which we'd taken as a good sign.  parking in downtown l.a. is always a pain in the ass.  and when i looked at the sign, i took note of the hours listed - meters in effect until 3pm.  sweet.

uh, except that it wasn't.  in my haste to get to our appointment in time, i didn't notice the other sign posted right next to that one:  the one that basically said "no parking after 3pm."  uh-huh.  that's right.

as we strolled back to where we'd left the pri-YES, in a cloud of happiness and elation over the success of the testing appointment, we realized in an instant that our dependable little automobile was...GONE.

i seriously thought i was going to pass out.  at first, i thought that perhaps the car had been stolen.  and then as we looked all up and down the street and realized that there were no cars parked anywhere, that damn sign caught my eye.  as i read it much more carefully this time, it hit me - my effing car had been towed away.  i went through a rainbow of emotions:  helplessness, fear, panic, anger.  i scanned the street for another sign that might possibly tell me where exactly my car had been taken, and...nothing.  then in fine print on that hated sign, i saw it:  dial 3-1-1 to retrieve towed vehicles.  okay, fine.

i fumbled for my phone, dialed the number, and was greeted by the oh-so-cheerful voice of l.a. mayor antonio villaraigosa.  i kind of wanted to kick him at that point.  but then it got worse:  the recording told me that the 3-1-1 system was experiencing high call volume at that time, and could i call back later?

NO, I COULDN'T FUCKING CALL BACK LATER.

by the way, the worst part of all this was the crushing realization that this was all absolutely, completely, 100% my own damn fault.  gah!  there was no one to blame but me, and that's what made me most furious.  plus, the inevitability of emptying my bank account to get my car back was just the icing on this rotten ass cake.

with that wonderful 3-1-1 system being a total fail, the teen and i just looked at each other quite helplessly.  while i decided to try calling again to make sure i hadn't misheard the recording, she dialed up to our friend the FIDM admissions rep to see if she had any idea which towing company might have our precious prius in their hot little hands.  and as we paced up and down the street, something caught my eye:  a sign on a trash can for a 24-hour downtown l.a. help line.  when both of our phone calls turned up nothing to help our situation, i dialed the number and finally got connected to someone at the towing company.

turns out, in order to get the car back, i needed to present current registration (which is IN the car, you bonehead), my ID to prove that i was the registered owner, and oh - $272.15.  blah.  to make matters worse, the title is still in MIL's name.  yup, the very same beloved MIL who lives in TEXAS.  i told the guy that we had matching last names, but he didn't care.  instead, he told me that he'd need a letter of authorization to release the car to me and a copy of her driver's license.  that's when i started to sweat.  like, literally.  i think i may have scared the teen a little as she looked at the sweat pouring down my face.  ugh, it was so gross.  my heart was pounding like mad, and my head was spinning.

our first piece of good luck came when MIL answered my frantic phone call right away.  i began with "so i have a little story to tell you...." and the word vomit just poured out.  looking back, i'm surprised i didn't start crying as soon as i heard her voice.  she was sympathetic and quick to do whatever she could to help, and i was so dang grateful that i'd been able to reach her so easily.

the towing company was 2.3 miles away from where we were standing.  i don't know what came over us, but we looked at that map and decided immediately that we could walk it, easy peasy.  maybe it was the adrenaline from the insane situation we were in.  while i was on various phone calls, i'd had the teen get in contact with the hub so that he would know what was happening, and when i finally had him on the phone about a mile into our walk, he said "why don't you just take a cab?"  huh.  i don't know why we didn't.  my thought is that we probably just wanted to get there already, and calling for and then waiting for a taxi would've just taken too much time.  who knows - i told you i was delirious.

our walk took us past all sorts of stuff - shops, restaurants, city hall, the county courthouse.  we were walking at a pretty damn speedy pace, and it was starting to get dark.  and the last half mile was seriously sketchy as all hell.  that's when we really regretted not calling for a stupid cab after all.  a few minutes after we passed this: 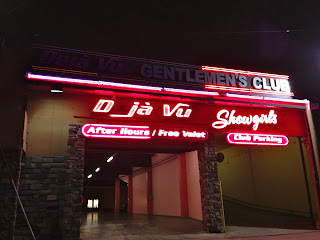 we finally saw this. 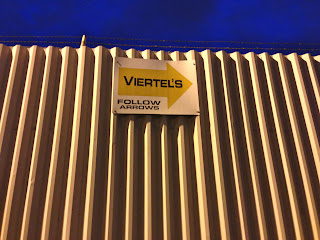 funny, the last time i saw barbed wire up close and personal was for a very different reason. 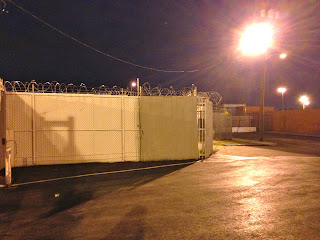 i don't think we've ever been so happy to see a shitty office in all our lives. 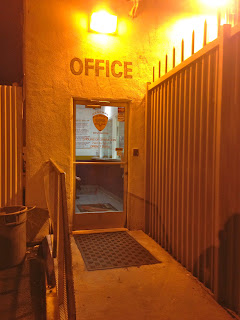 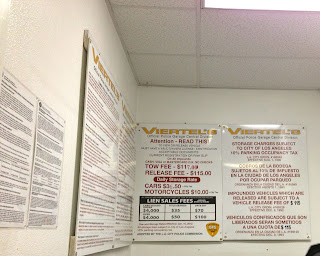 after presenting my ID and car key, and forking over the debit card for the fees, it was just a few more minutes until an attendant pulled the car around for us.  and because we hadn't been hit hard enough that evening, there was a final "fuck you" from the city of los angeles tucked under a wiper blade: 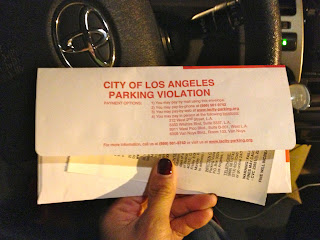 it didn't take too long for us to be able to look back and get a giggle out of the situation, though.  as we drove home in standard los angeles rush hour traffic, the teen looked over at me and said "you know, if this had to happen to me, i'm glad it was with you."  and then we started cracking up as we imagined this scenario with, say, rock-ell instead of me.  and OMG, can you imagine if we'd had the bean with us?  what a nightmare that would've been.

needless to say, i won't be assuming shit about parking anywhere ever again.  i'll be reading signage so carefully, it'll be annoying as hell.  no way is this gonna happen to me again, dammit.  once was quite enough.
at January 28, 2013

Email ThisBlogThis!Share to TwitterShare to FacebookShare to Pinterest
Labels: read all the signs, the teen is a fashionista