you win some, you lose some

i forgot all about one thing i'd wanted to include in my list of goals for 2013:  introduce new and healthy-ish items during dinnertime.  and as i did my meal planning for the week (also something i'm trying really hard to do on a regular basis), i turned to my "stuff i wanna eat" board on pinterest.

i've heard lots and lots of good things about quinoa, but just hadn't ever had the inclination to give it a try.  some of my friends really love the stuff, so i thought it might be a good idea to find a recipe that would appeal to my peeps and test it out.  so when i spied this recipe for a "mac & cheese" dish, quinoa was added to my grocery list.

target has been a major source of groceries for me in the last few months.  they don't have the biggest selection in the world, but they carry a lot of staples at prices that totally beat the regular grocery store.  except when it comes to quinoa.  the one and only bag i found was just under $8.  um, hell no.  i made another stop on my way home and found it for much, much less - we're talking two bucks here. 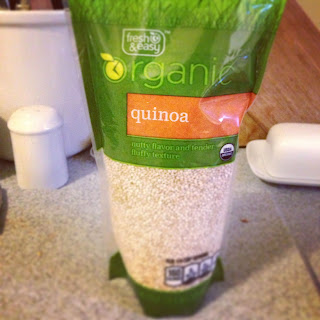 i totally hyped it up with the girls, telling the bean that it was a different kind of macaroni & cheese with "little teeny-tiny pasta balls."  she was totally buying it, too, which was pretty encouraging.  the recipe was easy enough to follow, and after about an hour it was ready. 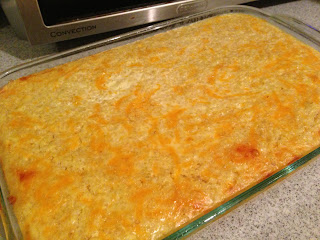 i dished it up alongside the bacon-wrapped pork tenderloin i'd thrown together, called everyone to the table, and hoped for the best.

i was trying to stay positive, though, and at first the bean was cool with it.  but as she took a few more bites, it was clear that she liked the stuff about as much as i did.  as for the teen - well, let's just say she's definitely her mother's daughter.  the hub, on the other hand, seemed to like it just fine.  i guess one outta four isn't too bad?  oy.

we did have a couple of winners during the week of new recipes, i'm happy to say.  like this crispy cheddar chicken (except that i found zero ritz crackers in my pantry and ended up subbing crushed cheez-its instead): 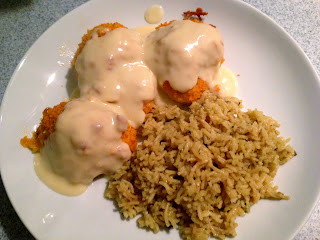 because i always end up cooking way more than what we actually eat, i had leftover chicken that went nicely into another dinner.  this time, chicken alfredo roll-ups. 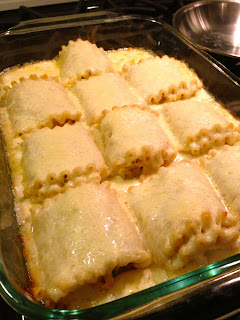 that afternoon, instead of sitting on my ass watching tv or what have you, i got smart and assembled this ahead of time.  the bean had a late gymnastics class, and so when we got home all i had to do was pop it into the oven to warm it up.  plus, i hate jarred sauce and wanted to make the alfredo sauce from scratch.  and unbeknownst to anyone, i mixed in a nice big dose of pureed cauliflower with the sauce in an effort to healthify it a bit.

it totally worked, and was a huge hit.  it's definitely going to make an appearance in our house on a regular basis.  most excellent.

and now i'm on the lookout for more delicious and healthy things to try.  also, i'm going to need to sit down at some point to organize that pinterest board.  while there are a good number of savory/dinner-type recipes pinned to it, the majority of it is sweet stuff.  shocking, i know.

OH!  my second go at the tinkerbell half marathon is this weekend.  think of me on sunday morning, will ya?  let's hope i can finish with a decent time.  and wait till you see my costume!  oh, so fun.